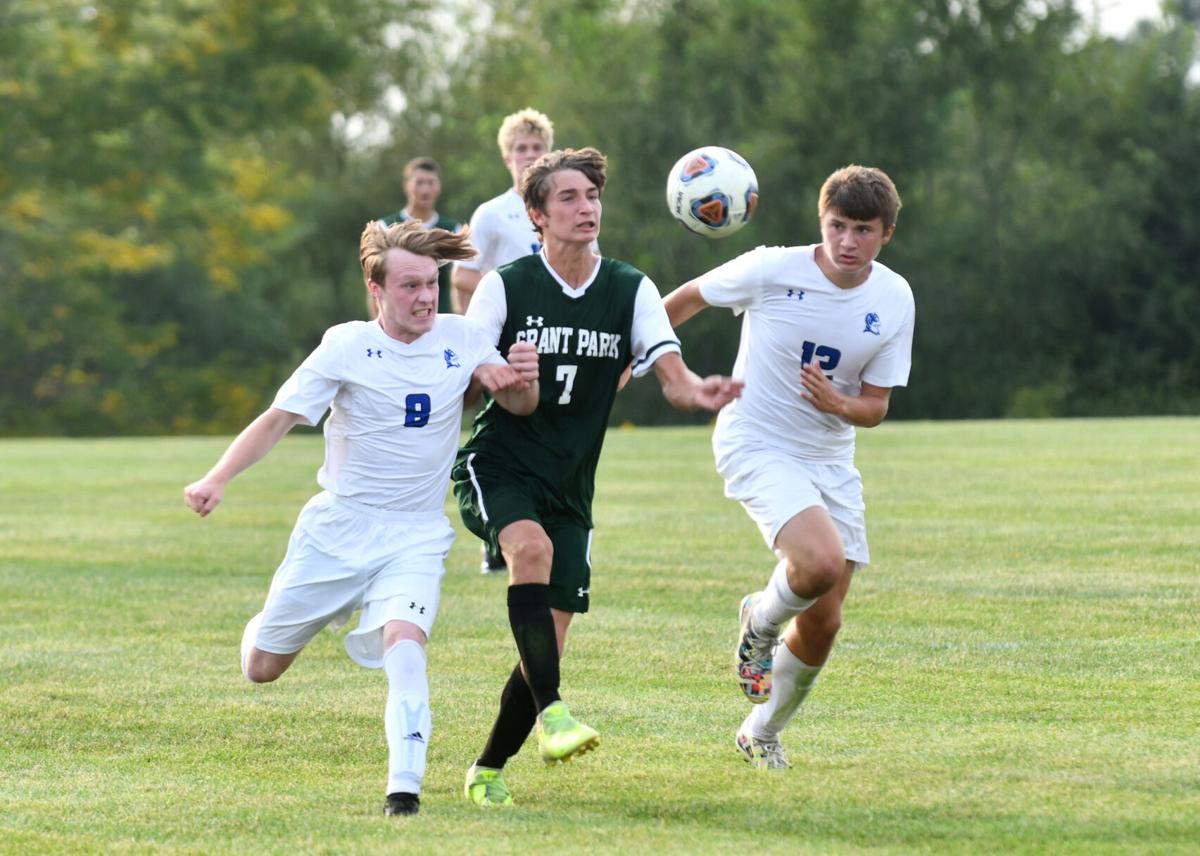 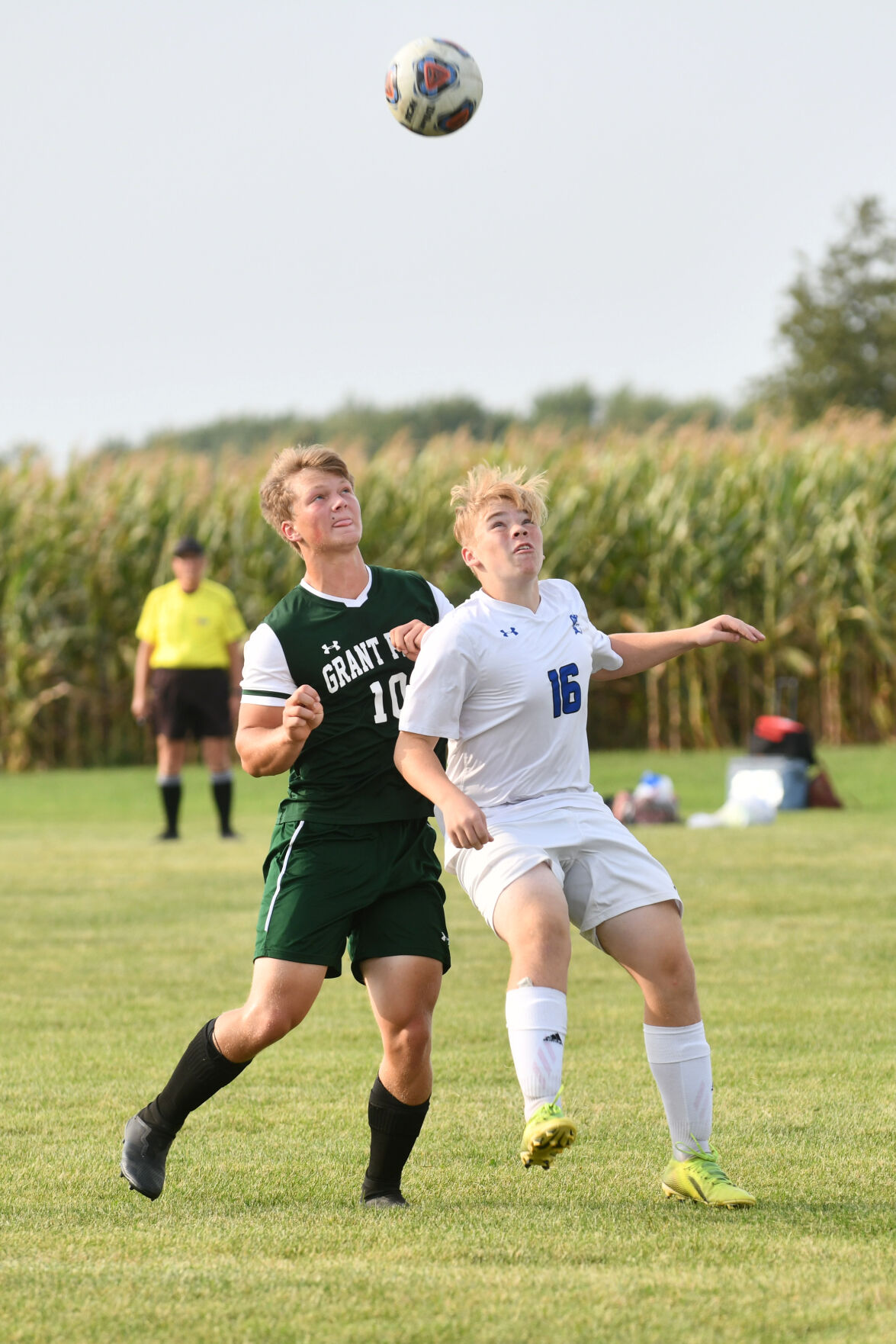 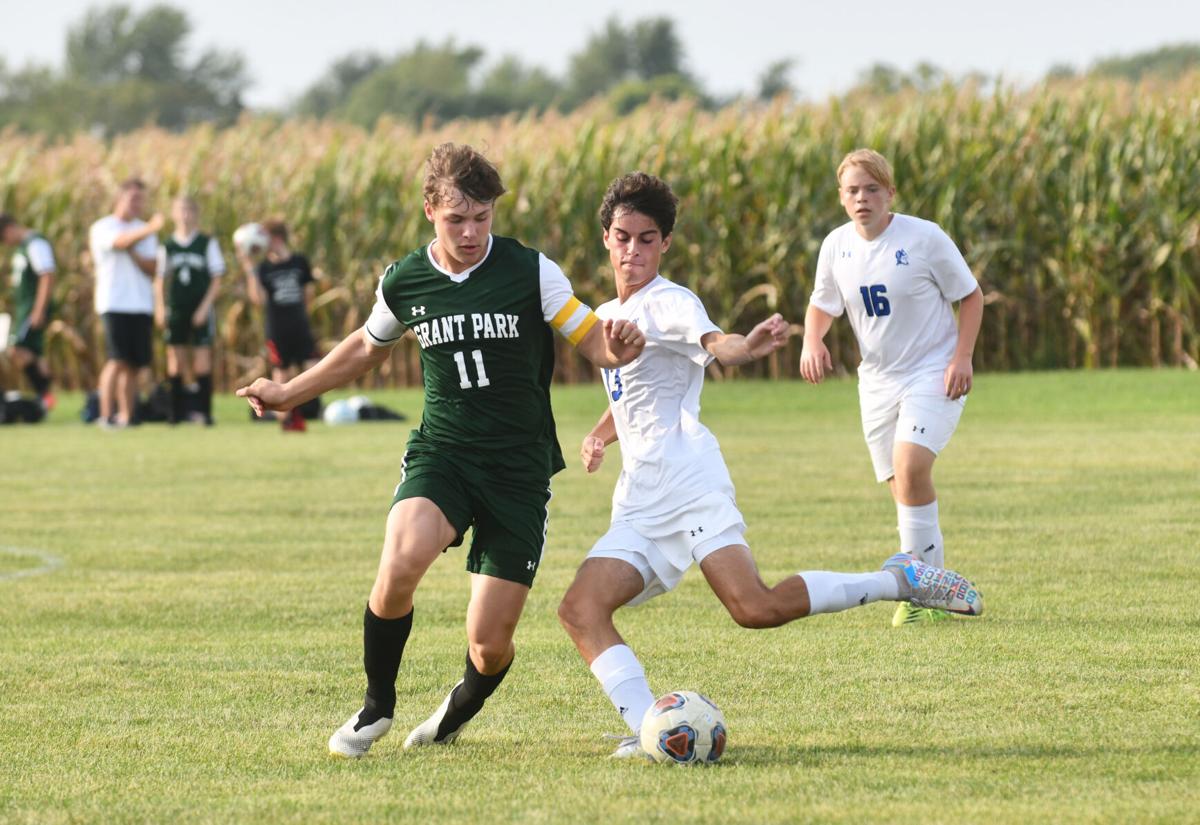 Peotone's Kyle Coners clears the ball ahead of Grant Park's Ayden Delaney on Monday during the Blue Devils' loss to Grant Park. 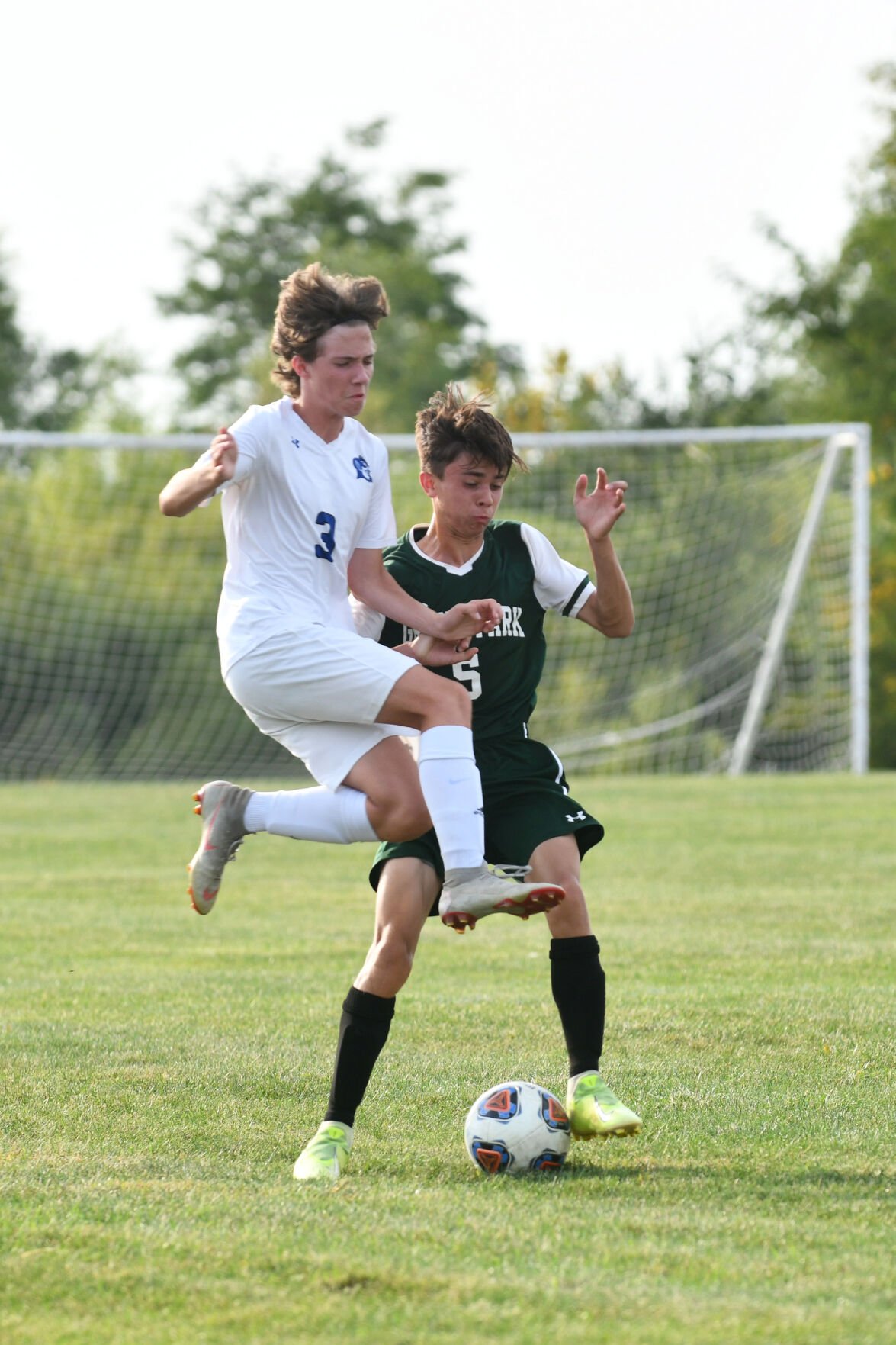 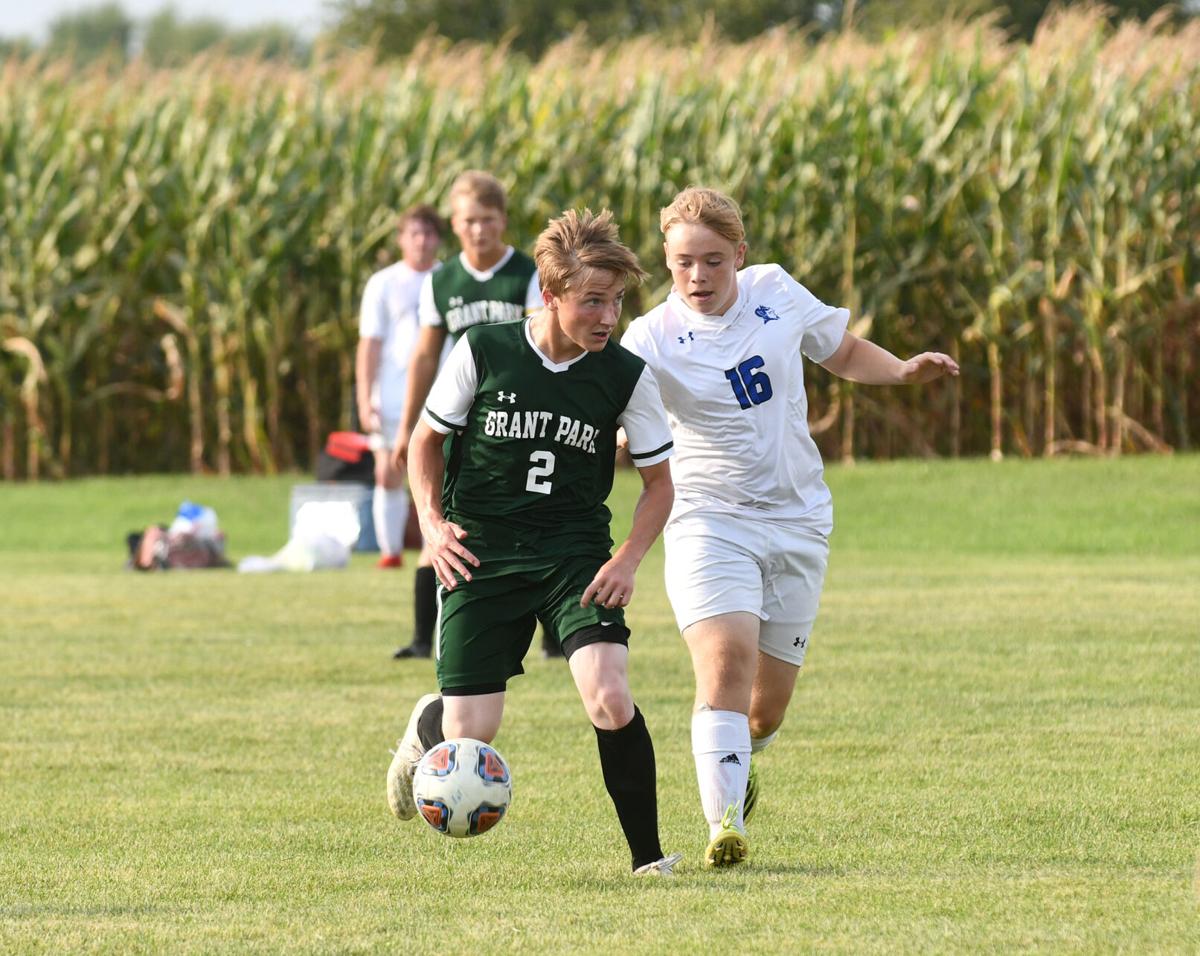 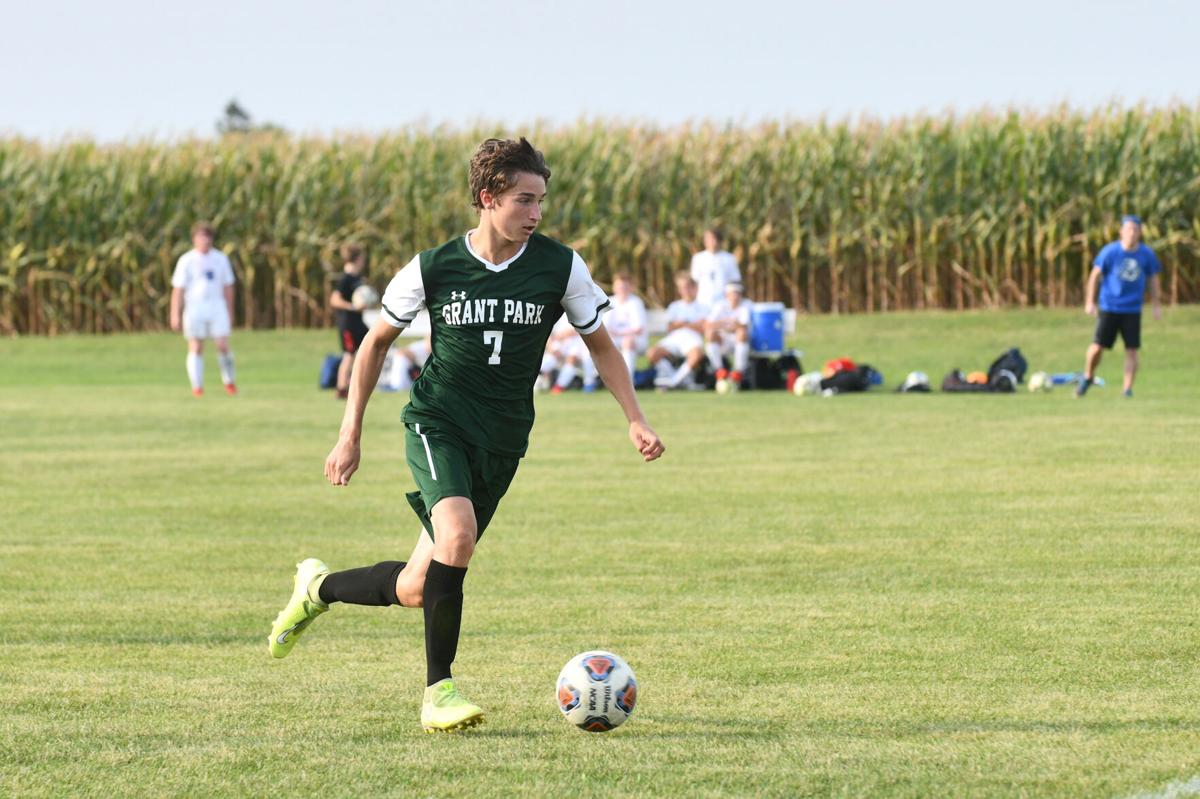 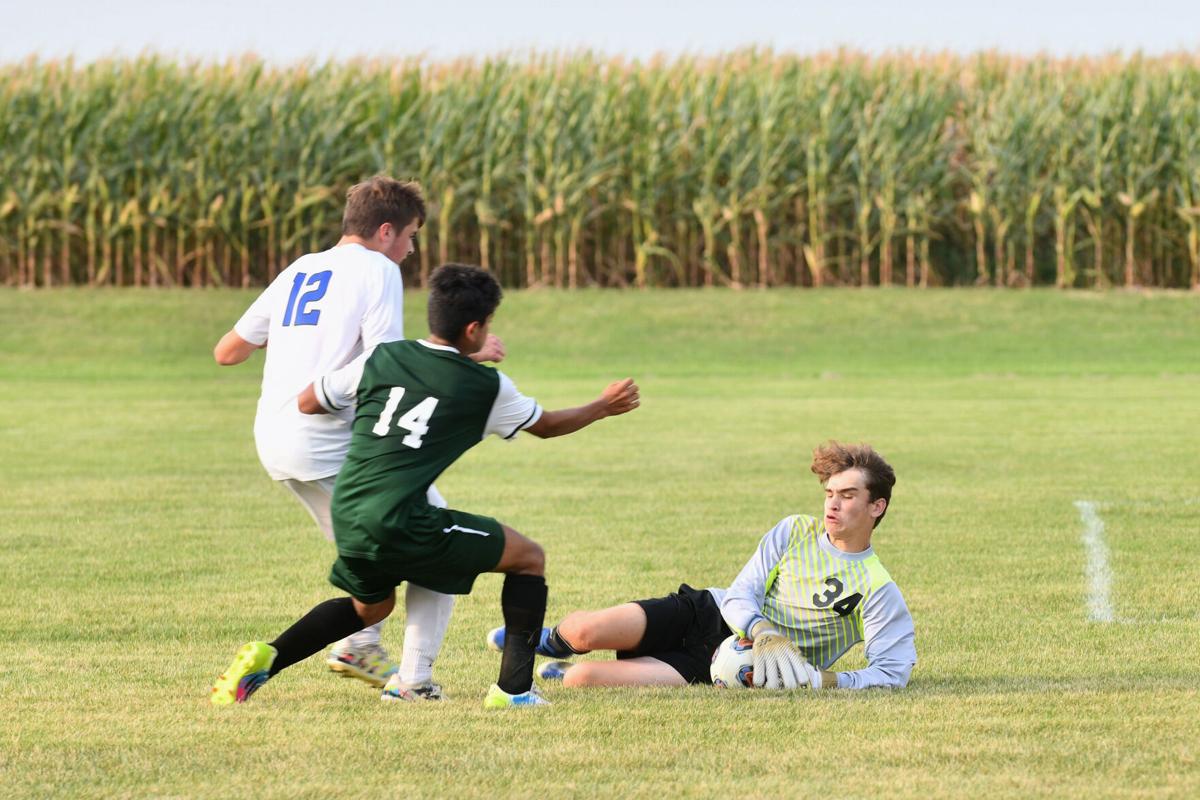 Peotone's goalie Andy Coulter dives on a ball as his defender Ayden Bettenhausen fends off Grant Park's Emilio Sandoval on Monday during the Blue Devils loss to Grant Park.

Peotone's Kyle Coners clears the ball ahead of Grant Park's Ayden Delaney on Monday during the Blue Devils' loss to Grant Park.

Peotone's goalie Andy Coulter dives on a ball as his defender Ayden Bettenhausen fends off Grant Park's Emilio Sandoval on Monday during the Blue Devils loss to Grant Park.

“After the first week of practice, I told them all we are winning every game this season 1-0,” Boccia said. “They look at me crazy, but team defense is how we are going to be successful.

“I know we put up four goals here today, but throughout the entire season, our team defense has been absolutely incredible.”

The Dragons’ tenacious defense was led once again by goalkeeper Luke Horn, who totaled six saves in the net on 16 shot attempts by the Blue Devils. The lone goal he gave up came in the first half at about the 10-minute mark, when Peotone’s Gino Petrizzi hit a no-look, reverse leg kick from about 2 yards out to cut Grant Park’s lead to 2-1.

“Horn must have grown 2 to 3 inches in the summer because he’s been diving and punching after the ball all season,” Boccia said. “... He’s been absolutely incredible as our goalkeeper, and I think he’s only given up a handful of goals all season. He’s our rock behind the net.”

Before Petrizzi’s goal 10 minutes into the contest, the Dragons were able to jump out to a 2-0 lead after Ayden Delaney and Rylan Heldt scored back-to-back goals two minutes apart in the game’s opening six minutes. Heldt’s goal came on a wide-open opportunity after Peotone’s keeper, Andy Coulter, miss-managed a save attempt by letting it roll past him, which gave Heldt a wide-open shot from within 5 yards.

“Fortunately for us, we capitalized on their goalie kind of fumbling the ball a few times in the first half,” Boccia said. “We were at the right place at the right time, but that’s the difference between winning and losing.”

Controlling the pace the entire first half, Grant Park eventually wound up taking a 3-1 lead into halftime after Heldt notched his second of three goals on the evening at about the 31-minute mark.

“My performance was definitely credited to my teammates,” Heldt said. “They always find a way to get the ball to me with an opportunity to score.”

Despite falling behind by two goals at the break Peotone did its best to try to recover in the second half. In the final 40 minutes of play, the Blue Devils seemed to be the more aggressive team as they outshot the Dragons 12-6, with six of them coming on goal.

“I thought the guys fought hard, and I felt like we moved the ball well,” Blue Devils head coach Justin Meyers said. “We had two bad lapses in the defensive third in the first half, which cost us two goals.

“I think we responded well at the start of the second half, and I thought we controlled the second half pretty well, granted Grant Park was playing more defensively with a two-goal lead,” he added. “Overall, it’s not our best effort, but it wasn’t as bad as the scoreboard reflected.”

Heldt scored the only goal in the second half with three minutes of play left to secure a hat trick and help the Dragons improve to 9-1 on the season.

“We didn’t think we’d be this good, but we are playing great right now,” Heldt said. “I hope we can continue to play like this the rest of the season.”

Heldt led Grant Park with a hat trick, and Delaney chipped in the other goal. Nolan Schneider totaled a team-high two assists, one more than teammate Sawyer Loitz.

Petrizzi scored the only goal to lead Peotone in its defeat. Coulter tallied three saves in the net.

Grant Park (9-1) remains at home for a game against Grace Christian at 4:30 p.m. today. Peotone (4-6) will host Kankakee for a nonconference game at the same time.