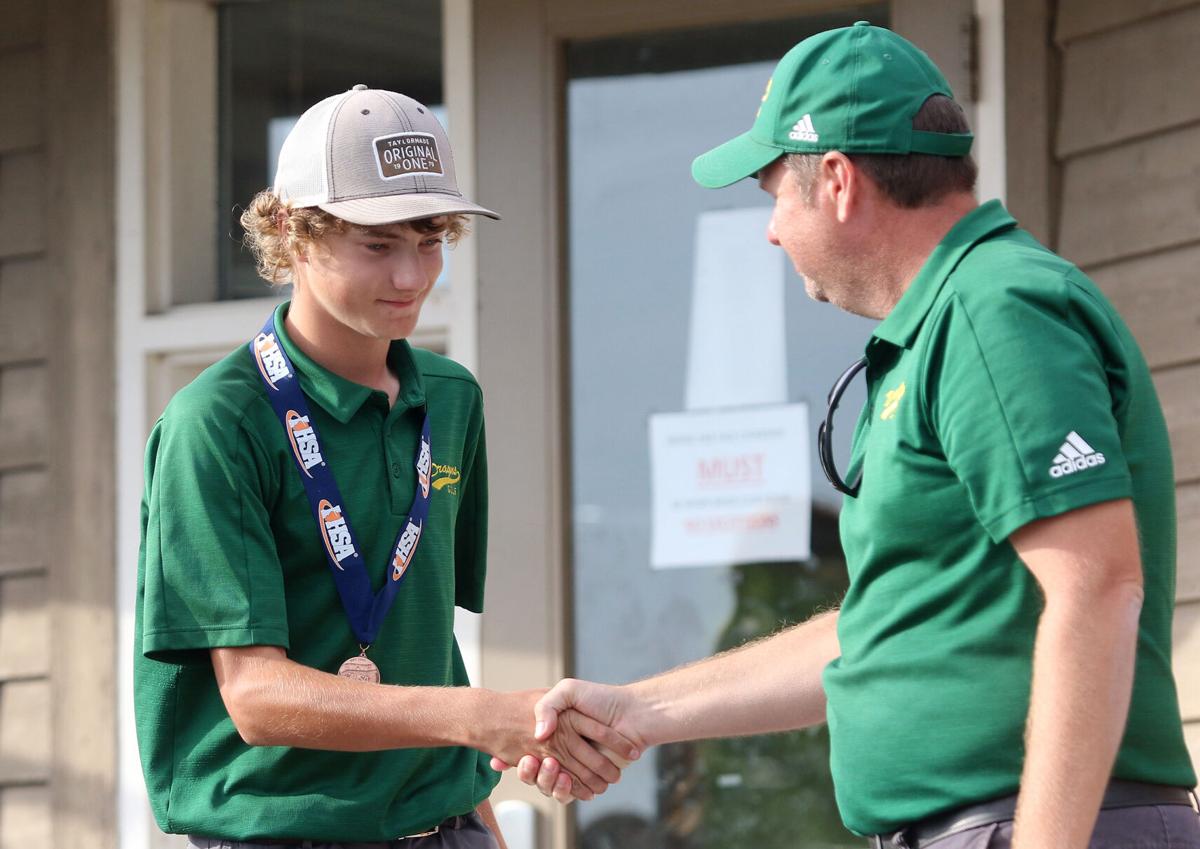 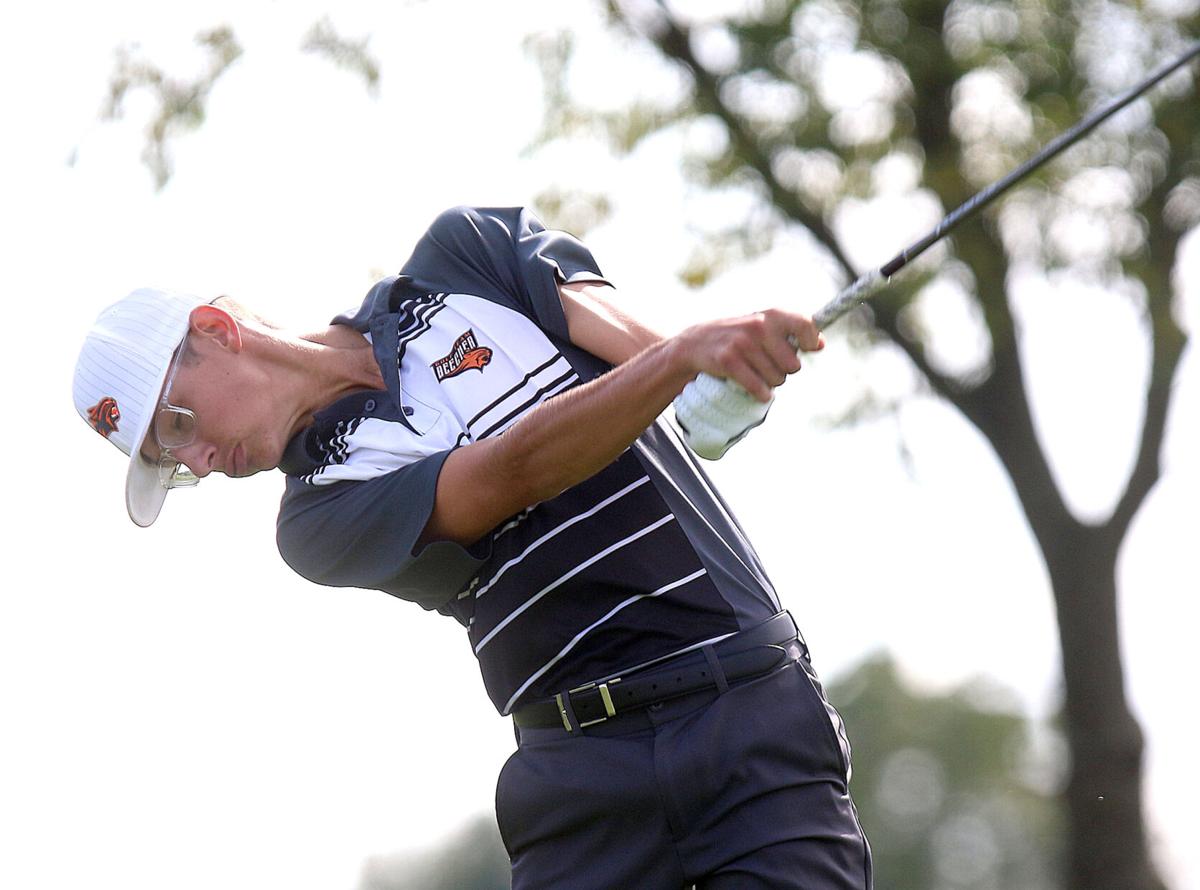 Beecher's Jack Hayhurst hits a tee shot down the second fairway at the IHSA Class 1A State Golf Finals.

Beecher's Jack Hayhurst hits a tee shot down the second fairway at the IHSA Class 1A State Golf Finals.

In his first state tournament as just a sophomore, Grant Park’s Trey Boecker went into this weekend’s IHSA Class 1A State Finals hoping to have a decent weekend.

The Dragons golfer exceeded his own expectations and set a new school record in the process.

Boecker’s 148 card for the two-day tournament at Prairie Vista Golf Course in Bloomington not only was good enough to secure third overall individually, but it also was enough to set a school record for Grant Park’s best individual finish at state, besting Dennis Sullivan’s 1970 record when he finished sixth overall and tying Sullivan with that score of 148.

“I think it’s pretty cool that I hold the school record now,” Boecker said. “I have to keep playing my game, and hopefully I can beat my own record now next season.”

Despite having some first-tee jitters on the first day, Boecker managed to card a 71 for the first round of the tournament thanks to his strong drives and clutch putting, which left him only one stroke off the top of the leaderboard going into the second day.

Unfortunately on Day 2, the wind picked up a bit, which left Boecker to notch a 77 for the final round to card a two-day total of 148, which was just four strokes off IHSA Class 1A state champion Drew Hall, of Rockridge.

“I think this experience will help me a lot for high-pressure situations,” Boecker said. “That second day was a very stressful round of golf, knowing that I was only one stroke back of first place.

“It really put a lot of pressure on me.”

Being that most of his competitors were upperclassmen, Boecker’s head coach Andy Dillman noted the thing that makes the sophomore so special is his ability to keep calm while on the links.

“What makes Boecker such a good golfer is his composure,” Dillman said. “To be 15 years old and maintain that composure is a very unique thing. A lot of 15-year-olds are full of emotions, and he just keeps it even-keeled. He doesn’t let a bad shot really get to him outwardly.”

With two more seasons left of his high school golf career, both Coach Dillman and Boecker believe the best is yet to come.

“It’s an outstanding thing to have Trey for the next two seasons still,” Dillman said. “Obviously, we have goals, and we just want to build on this experience next year and then have even better performances come his senior year.”

Beecher made the trip to state as a collective team made up of four sophomores, two freshmen and a junior.

The Bobcats found themselves at the upper part of the 12-team leaderboards on Day 1 until they ran into some late-hole struggles, which forced them to miss the cutline after totaling a team score of 324. Because of pace of play, Beecher finished the day in ninth place.

“Expectations-wise, we really didn’t have any,” said Bobcats head coach David Serafin. “We just wanted to go out there and compete the best we could. My guys did that, and I think they learned a lot.”

Despite missing the cut as a squad, the Bobcats still had multiple golfers play well enough to participate on Day 2 as individuals. Five of their six team members — Jack Hayhurst, Brandon Moffitt, Andrew Hering, Vincent Messana and Jackson Reece — qualified for Day 2 after shooting 79, 82, 82, 81 and 83, respectively.

By the end of the tournament, it was Hayhurst who wound up leading the Bobcats with a 159 two-day total, which was good enough for 35th overall individually.

“I wasn’t too mad about shooting 79, 80, considering the second day featured some harder pins, which is why a lot of scores went up on that second day,” Hayhurst said. “So, I was pretty happy with how I played.”

“It’s so cool to be able to watch the young guys lead us despite the fact we were going up against mostly juniors and seniors,” Serafin said. “Just to see their composure and growth was exciting.”

Although Beecher couldn’t quite get it done this golf season, they hope to return, as all six members of the team will be back next fall.

“It’s fantastic knowing I’m going to still be able to coach these guys for two to three more years,” Serafin said. “... We are going to have a good battle for positioning next year, and I expect all these guys to come back and push even harder.”

In this week's 2-Minute Drill, Mason Schweizer looks at the history both he and Cody Smith saw made Friday, as well as the local playoff race.