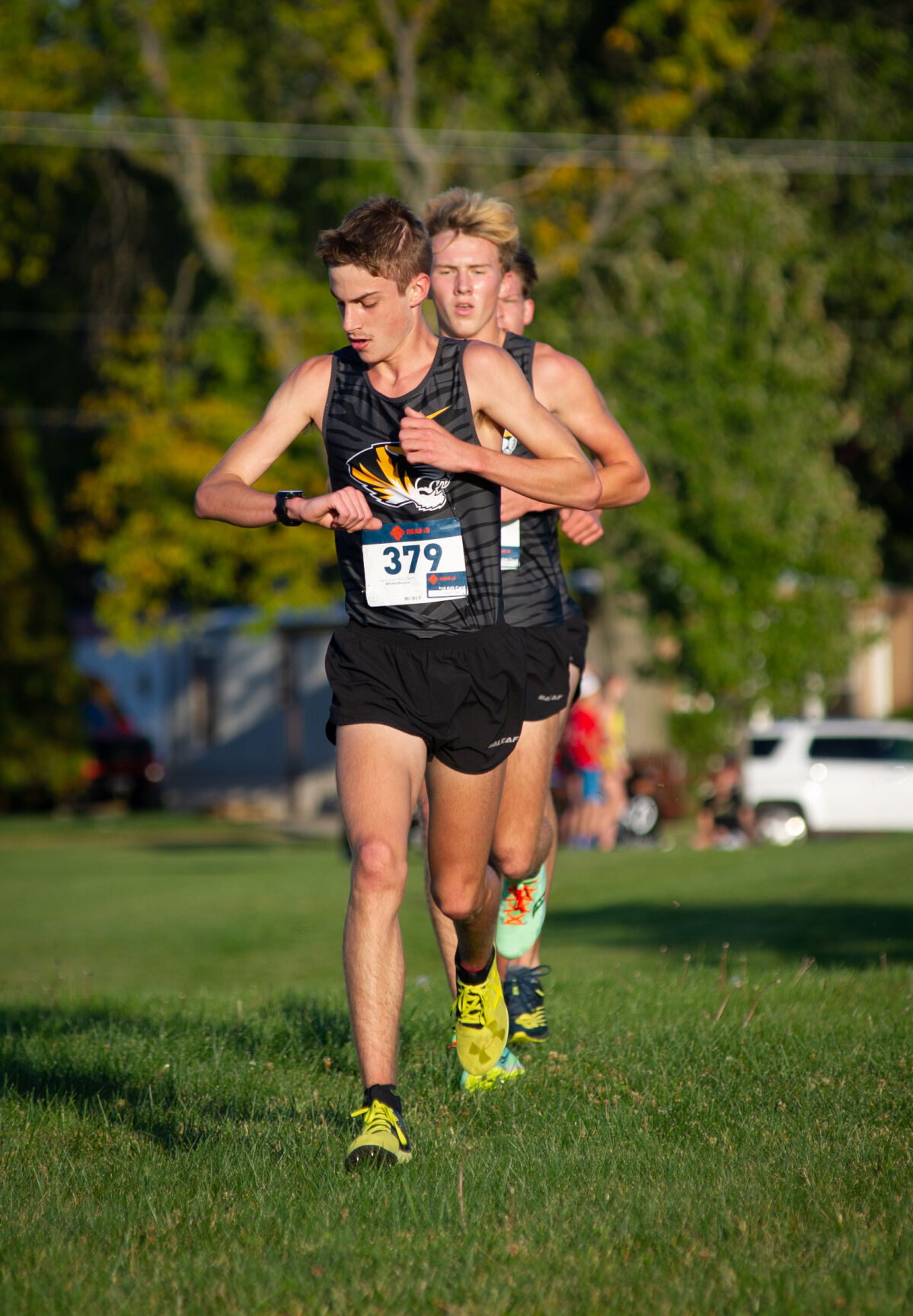 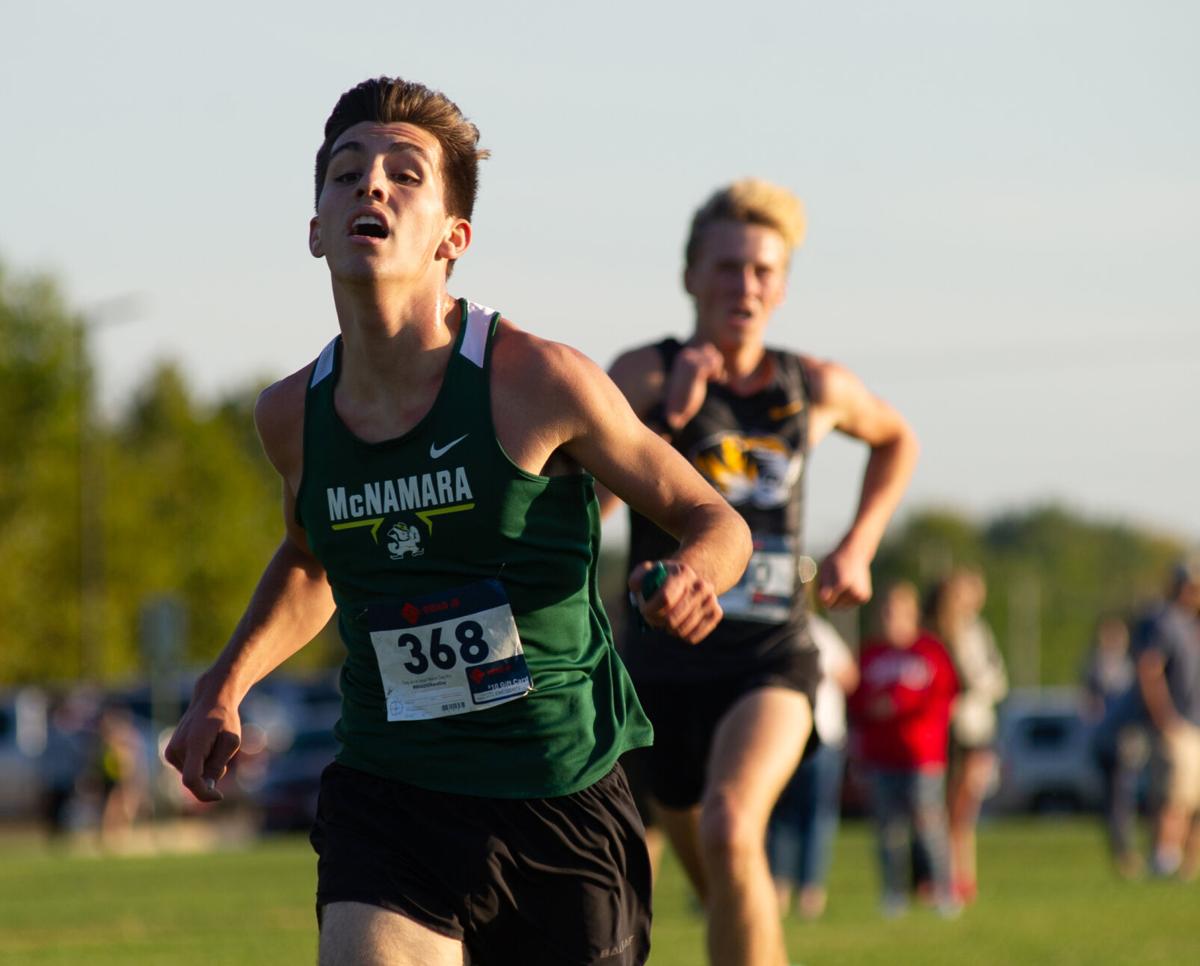 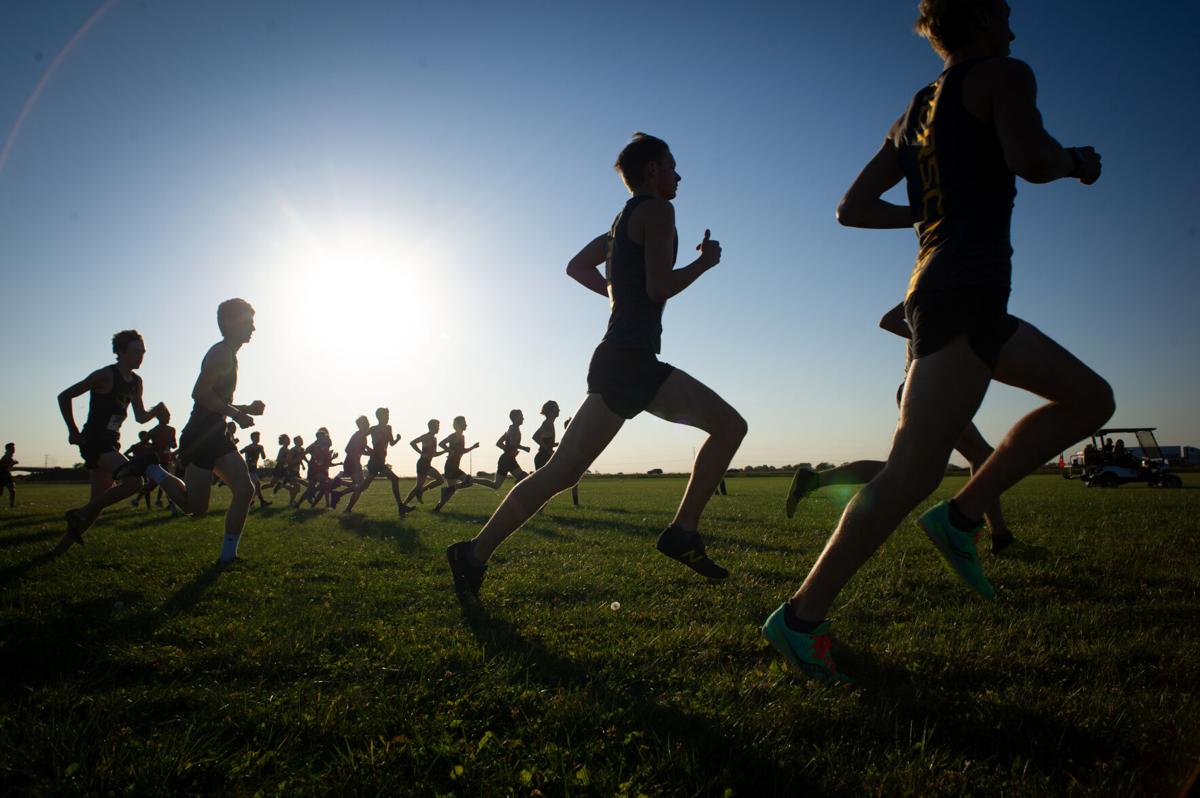 Runners are silhouetted as the boys begin their race during Thursday’s All-Area cross country meet at Legacy Park in Manteno.

Runners are silhouetted as the boys begin their race during Thursday’s All-Area cross country meet at Legacy Park in Manteno.

MANTENO — He may only be a junior, but Herscher’s Drew Rogers has already conquered nearly every obstacle and challenge that his come his way in his cross country career. But coming into Thursday’s All-Area race at Legacy Mark in Manteno, the defending individual All-Area and IHSA Class 1A State Champion was eager to check another box off — a team All-Area title.

And that’s exactly what happened Thursday, as Rogers was the lone runner to run a sub-16 minute race and saw teammates Ben Morgan and Kamden Lockwood finish closely behind in third and fourth to help Herscher top second-place Bradley-Bourbonnais by two points, giving Rogers another solo victory and the Tigers the team victory.

Through the race’s halfway point, Rogers, Morgan and Lockwood were packed together several strides ahead of the rest of the field, with Rogers dropping back a bit to form that pack with his teammates.

“I just wanted to help my teammates out today and help the two and three guys pack up a little bit,” Rogers said. “I came off a long run yesterday and my legs were a little tired, so I just took it as a workout and helped out my teammates.

“I think it’s big, especially going into the postseason. It will give us confidence that we can pack up, run pretty quick and be up there with the top guys.”

But by the time Rogers came around to take the finish first, he was well ahead of the pack, with his 15 minute, 43 second time besting the second-place finisher, Bishop McNamara’s Chase Provost, by 26 seconds, with Morgan coming in third an additional second behind Provost. Lockwood finished fourth and Bradley-Bourbonnais’ Josiah Jones came in fifth, leading a pack of Boilermakers that included Brendan DelCanton and Jeremiah Lanum. Trevor Stutz took 11th and Finley Cracco finished 16th to give the Tigers their winning score of 15 points.

Herscher coach Rob Grosso said that while Rogers has earned his rightful reputation on his prowess in distance running, it was his leadership both during and after the race, when he stood at the finish line cheering all of his teammates until they finished, that make him who he is.

“Of all the success Drew has ever had, it’s what he does outside the numbers that show what he’s really about,” Grosso said. “And that was the plan; we wanted to get the rest of the guys to the level we want them to get to rolling into the postseason.”

For Boilermakers coach Tony Swafford, taking a close second-place finish behind a team who would have surely been a legitimate threat at the IHSA State Finals this year had it not been canceled due to COVID-19 is a pretty impressive feat.

“Herscher’s a really strong team and those boys have worked really hard together,” Swafford said. “Obviously Drew is phenomenal and hats off to him on the progress he continues to make.

“If we beat them, great, but losing to them is nothing to be ashamed of ...” he added. “I know our boys, and I’m not gonna say we couldn’t have run better, but we had a pretty phenomenal day and did what we needed to do.”

What the Boilers did was similar to Herscher’s gameplan of keeping their packs of runners ahead of the field. After the cluster of Jones, DelCanton and Lanum, Ebenezer Gideon and Matthew Anderson weren’t far behind to take the final two spots of the top 10, resulting in their final tally of 37 points.

“My message to [the team] was simple; when you have a tough time in life you lean on people for support and that translates to running,” Swafford said. “When you’re out there and it’s a struggle, you rely on others to pick you up.

“They did that and ran in packs in a couple places and gave us a chance to win.”

Bishop McNamara took third on the evening, led by Provost’s second-place finish and an eighth-place finish from his younger brother, Christian Provost to give the Irish a pair of Provosts in the top 10.

Irish coach Preston Provost said that Chase approached Thursday’s race a little differently than the All-City race he won earlier this year, and although Rogers stood between him and a first-place finish this time, Chase ran a more complete race Thursday, and so did his brother

“At All-City [Chase] was just gonna outrun everyone and today he raced,” Preston Provost said.

“We were in control his first mile and a little after that second mile we set up for that finish and he did what we wanted him to do. Him and Christian ran the races they’re supposed to run.”

Sam Munsterman (15th), Carter Heinrich (21st) and Gavin Phillips (27th) rounded out the Irish’s scorecard, a trio of runners coach Provost was impressed with on a day where several teams saw multiple runners have their best times of the year.

“I think the excitement of getting [local] teams together and it being an area thing, the adrenaline kicks in and everyone wants to do well when you’re against people you know and have ran against,” Preston Provost said. “All-Area is a big deal — it was a big deal back when I was in high school and it still is.”

Beecher finished fourth with 98 points, a full 30 points behind the Irish, while all five of Manteno’s finishers set new personal records on the way to a fifth-place Panthers finish, with their 163 points edging out Kankakee by six points.