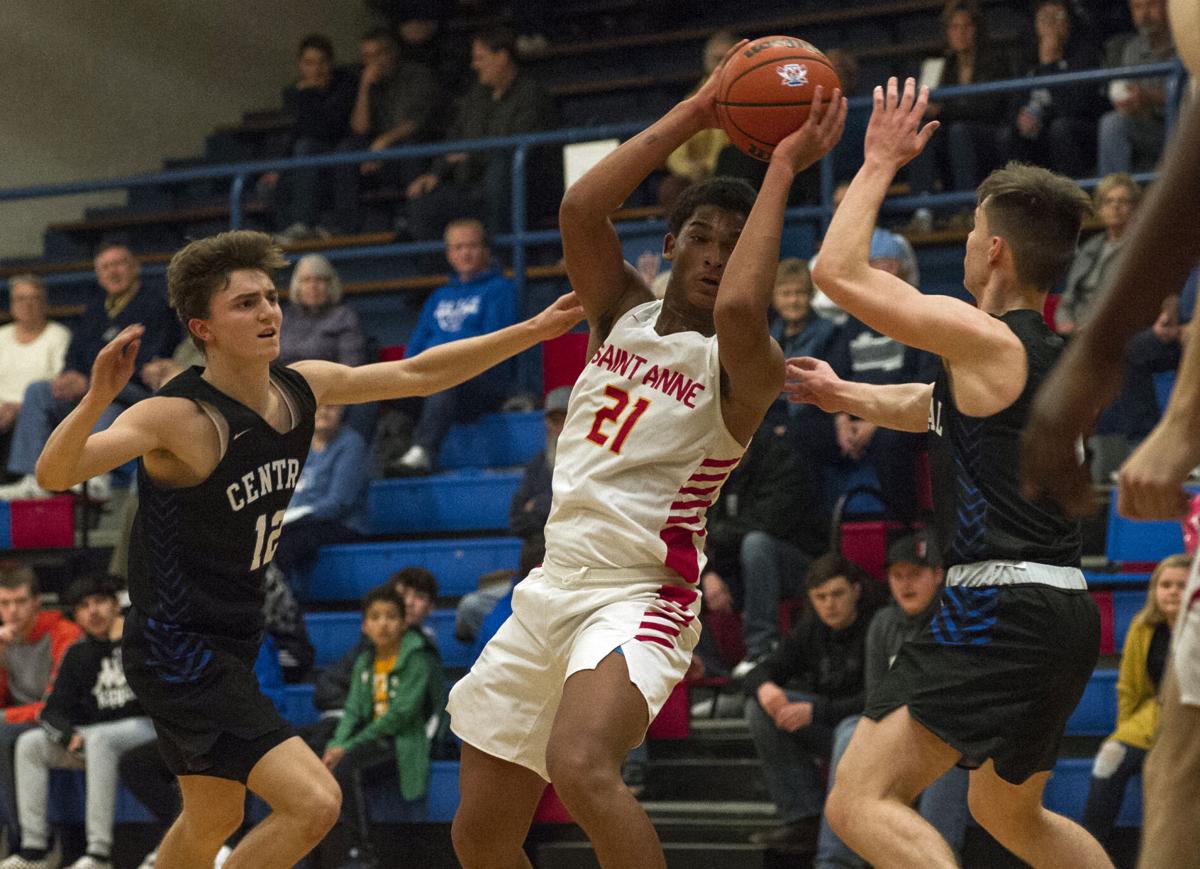 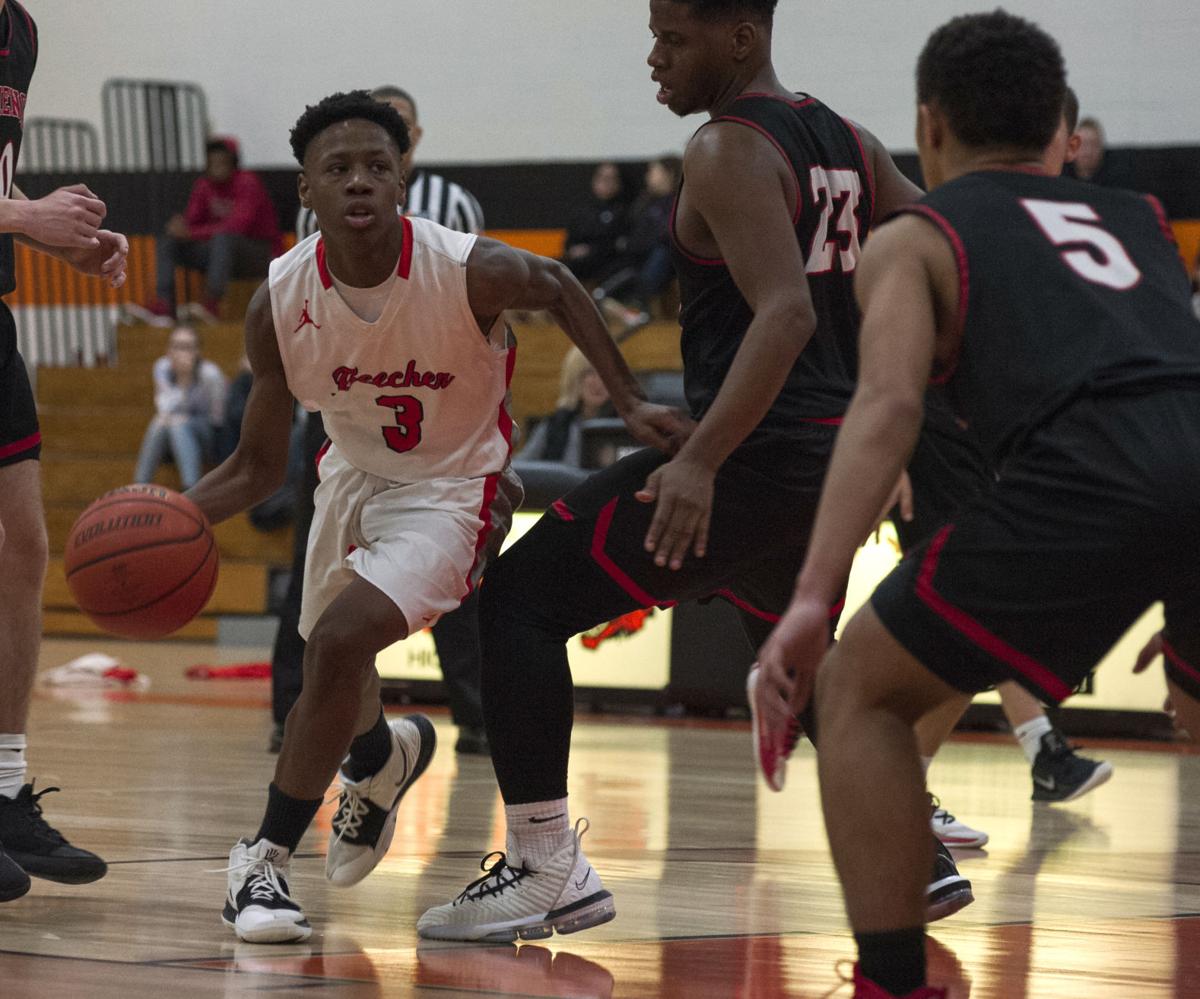 Beecher's Duane Doss looks for an open teammate as he moves the ball past Momence's Jasper Jones during a game last season.

Beecher's Duane Doss looks for an open teammate as he moves the ball past Momence's Jasper Jones during a game last season.

During the past handful of years, the River Valley Conference has provided the area with some of its most thrilling games, from overtime nailbiters to buzzer-beating theatrics.

St. Anne ran the conference table last year, but with every other team in the conference returning multiple-year starters and key pieces at several positions, as well as the addition of Grace Christian, expect more classic matchups from the area’s smallest schools.

St. Anne coach Rick Schoon was part of this year’s Illinois Basketball Coaches Association Hall of Fame class, and in his 22nd season, he will have to figure out how to replace two three-year players who have helped keep the tradition strong in St. Anne.

A trio of skilled seniors — EJ Hayes, Kemell Bender and Cortez Baines — give the Cardinals a great foundation in their quest to defend the conference crown, but the rest of the rotation has yet to fall into place for a largely inexperienced St. Anne squad in a strange season.

“We’re an unknown at this time,” Rick Schoon said. “We haven’t been able to get our entire team to a practice yet. We’re going to have to develop team chemistry as we progress during the season.”

Gardner-South Wilmington patiently waiting to get to full strength

Few teams entered the shortened season with as much excitement as the Panthers, who have a deep group of five seniors back from last year’s squad that was tied for second in the conference.

But some close-contact COVID-19 cases have held some of those players out for the start of the season, namely guard Chris Bexson, the Panthers’ leading returning scorer (15 points per game) and an all-conference and Daily Journal All-Area returner.

Once Bexson rejoins classmates Connor Steichen, Nate Wise, Caydan Landry and Brandon States, the Panthers could pick up where they left off last year.

“With five of our top players returning, we’re all looking forward to this season,” Panthers coach Alan Wills said. “It’s unfortunate that it was cut short, and we’ve had a few close-contact COVID cases, but we’re excited to get as many games in this season as possible.”

Doss is the boss for Beecher

The Bobcats’ 17-15 record from a year ago might not stand out, but the team went 8-4 in the RVC and finished tied for second, showing progression from younger players as the season went on.

One of those younger players is junior Duane Doss, who is back for his third year as a starting guard after leading the area in scoring one year ago at 20 points per game. The all-conference and Daily Journal All-Area choice will be joined by two more three-year starters in seniors Ryan Leblanc and Sebastian Linan, as well as a deep junior class coach Tyler Shireman said he is excited about.

“I’m really excited to get another season with these players, albeit short,” Shireman said. “Our lineup contains a lot of experience and a solid mix of new players ready to contribute immediately.”

Grant Park followed up its best season in school history two years ago with another respectable performance last season but fell a game short of back-to-back regional titles.

There is no postseason this year, but with starters Ryan Dulin, Clayton McKinstry, Troy Reynolds and Travis Fick back to blend with fresh faces Sawyer Loitz, Wesley Schneider and John Kvek, Dragons coach Bryce LaMore will have the depth he likes for his relentless style.

“The RVC should be very competitive — from top to bottom, it will be a very challenging but fun schedule for us,” LaMore said. “Returning four starters and 90 percent of our offense, we’re hoping to use our experience to our advantage.”

Few teams have been snake bitten as the Chargers when it comes to injury luck lately, including the loss of prolific scorer Chace Cathcart to a torn ACL five games into last season’s fifth-place conference finish.

Cathcart is back and healthy and has another tremendous scorer to share the backcourt with in junior Connor Cardenas. With athletic forwards such as Tyler Platz and Bobby Mogged back as well, coach Justin Cox will have a fun season of hoops if his team can stay healthy.

“With losing one very important senior, Brian Curling, it will now be up to two seniors — Platz and Cathcart — to lead this team,” Cox said. “The junior crew, led by Cardenas and Mogged, look to make their mark in a shortened season and prepare for a big senior year in 2022.”

Wildcats coach Mason Parks has the luxury every coach would love to have each season in returning all five of his starters, led by second-team all-conference selection Andy Onnen.

Onnen and fellow seniors Brodi Winge, Darrien Pocius, Caleb Klecan and Tate Caposieno are back to reclaim their starting spots and juniors Dalton Anderson and Weston Lareau will see more run in their second season on varsity.

“Although we only won three games last year, we feel we’re ready to compete against anyone we play against,” Parks said. “The key for our season will be how well can we play defense and rebound the ball. If we can consistently hold teams to just one shot, I know it will give us a chance to compete in every game.”

As the Crusaders have started their first season as an IHSA-member school and a part of the RVC, coach Alan McGuirt will be tasked with replacing production from six seniors, including Daily Journal All-Area honorable mention MJ Lonergan.

Luckily, all-area choice Zach McGuirt is back in the fold, and he could be called upon to increase his production after averaging a hair less than 20 points per game last season.

“I’m really excited to see what steps forward this team will make, even in a short season,” Alan McGuirt said. “We’ve had a lot of turnover, graduating six seniors from our program from last year, and we’re pretty young. There’s a lot of potential here, though, and I’m looking forward to seeing it play out.”

Beecher will figure to face some tough competition in its quest for a third-straight RVC title.

Reed-Custer's swarming defense and a 24-point output from Lucas Foote gave the Comets their first win of the season.