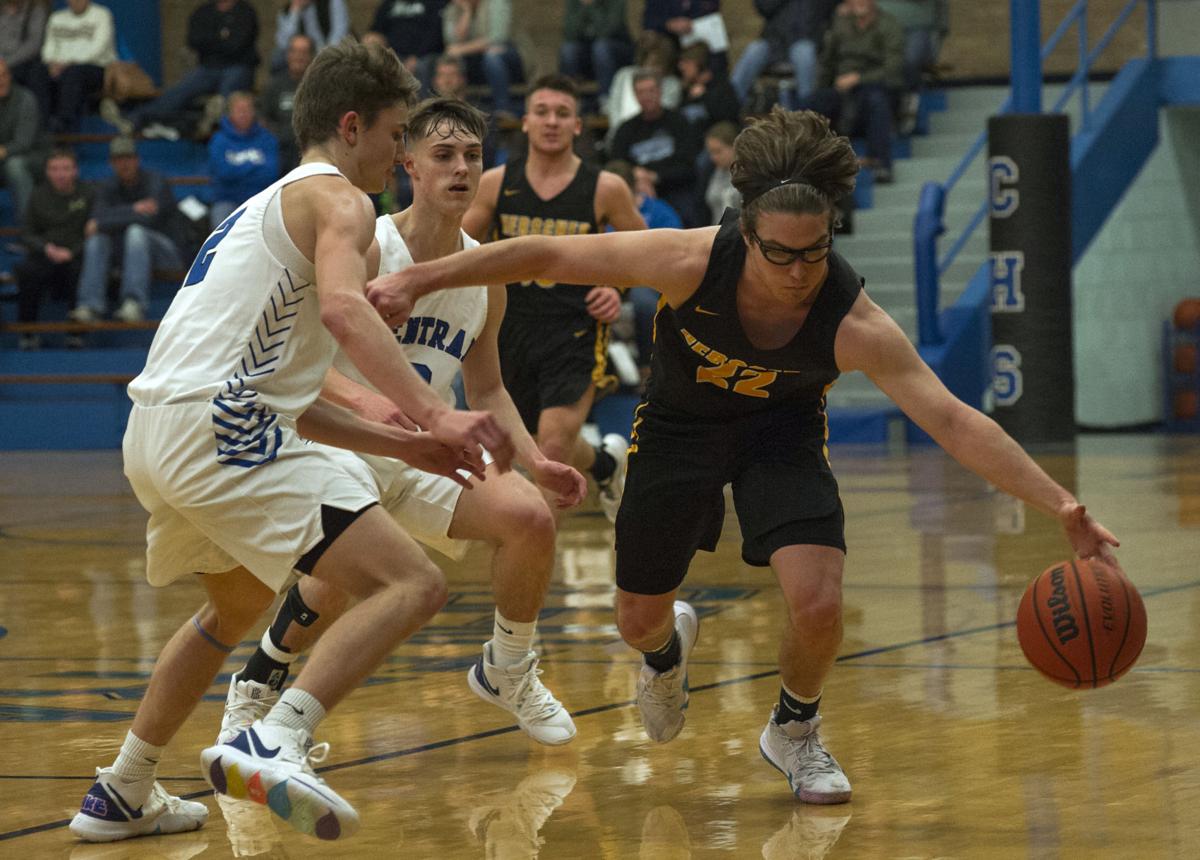 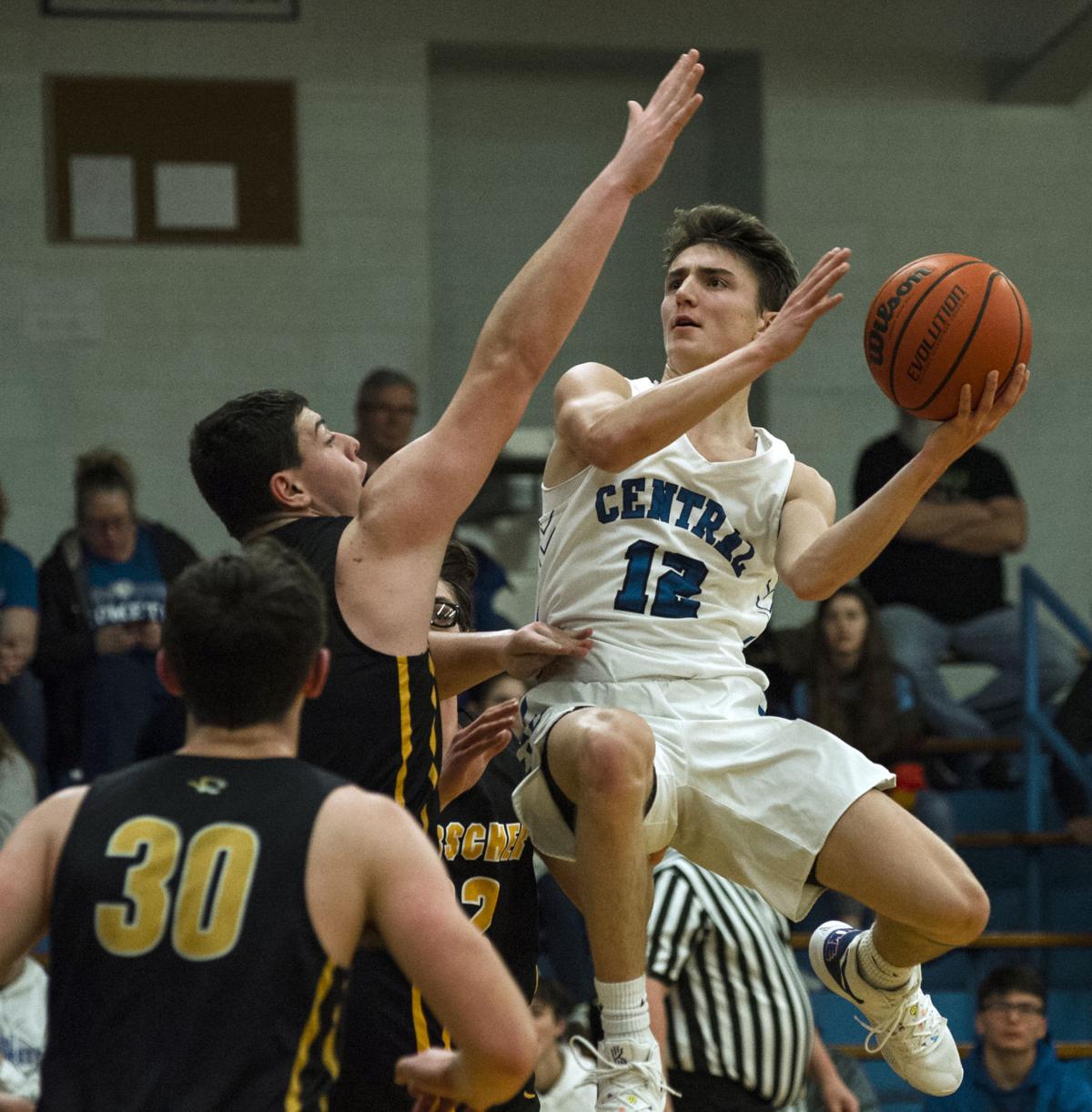 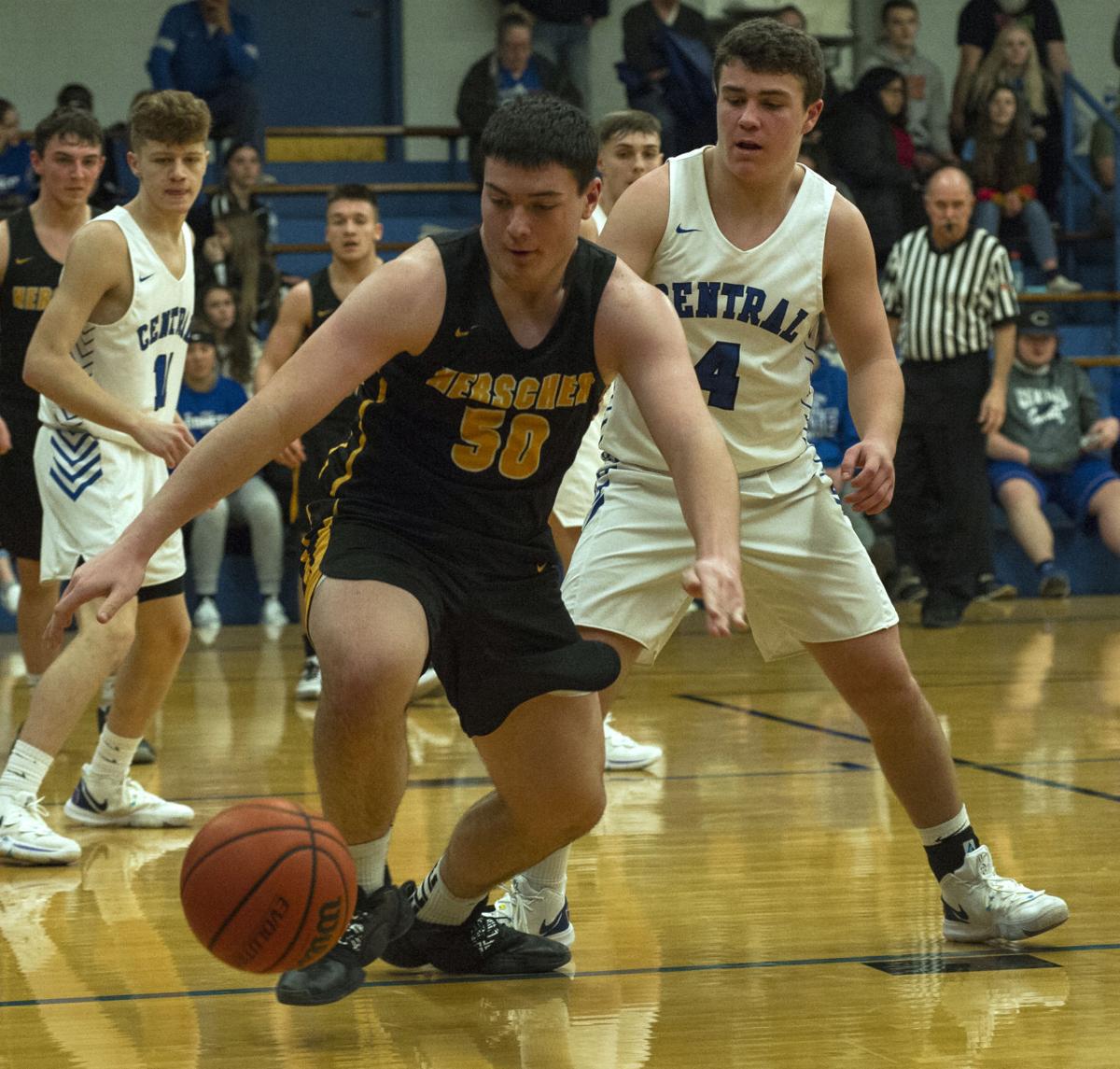 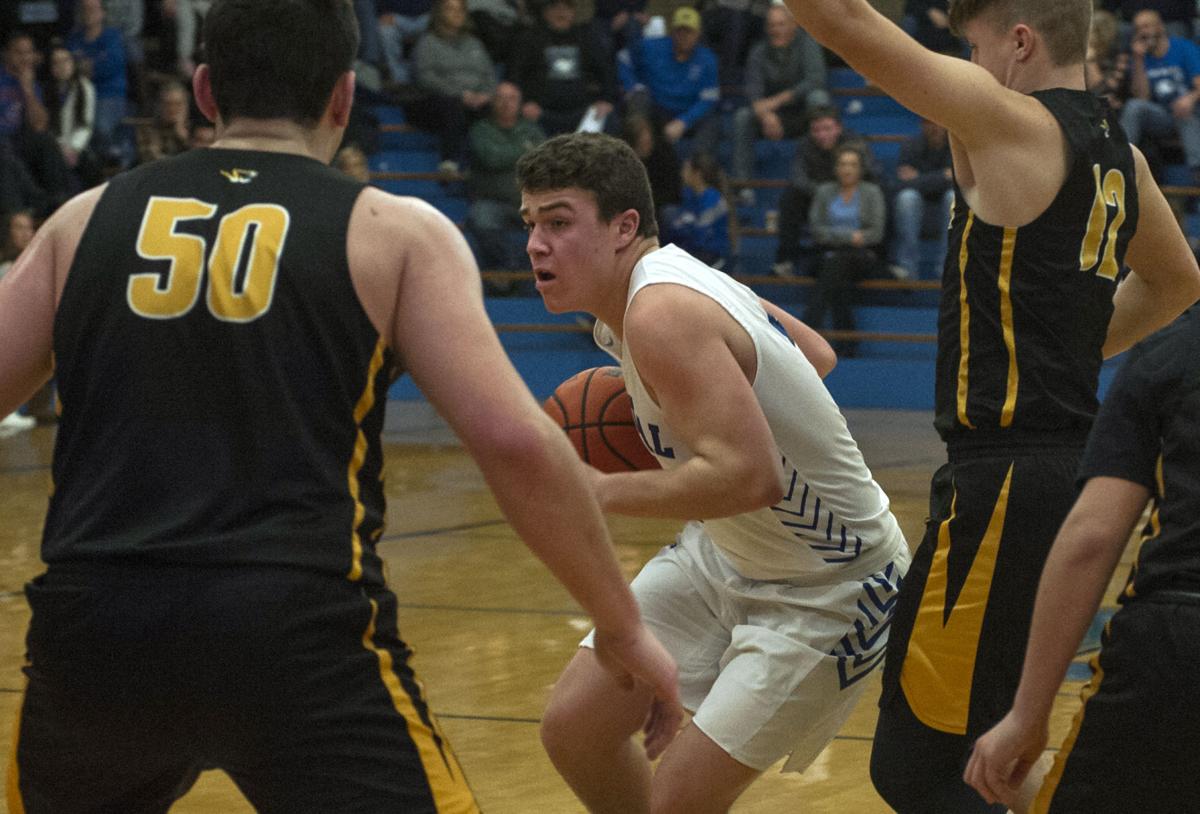 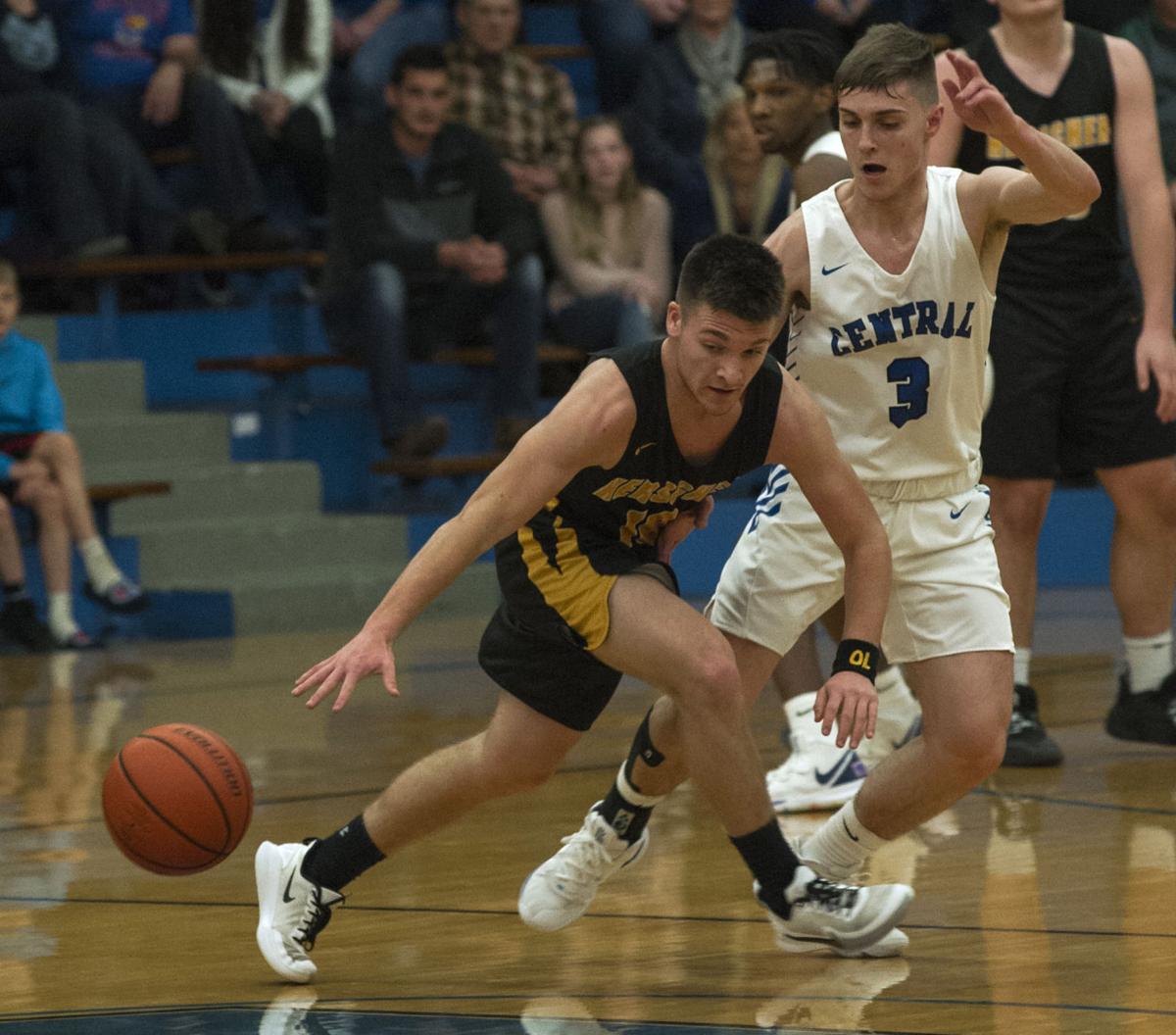 Herscher High School's Camden Berns looses control of the ball as he tries to work his way around Central High School's Kyle Peters during Friday night's game in Clifton. 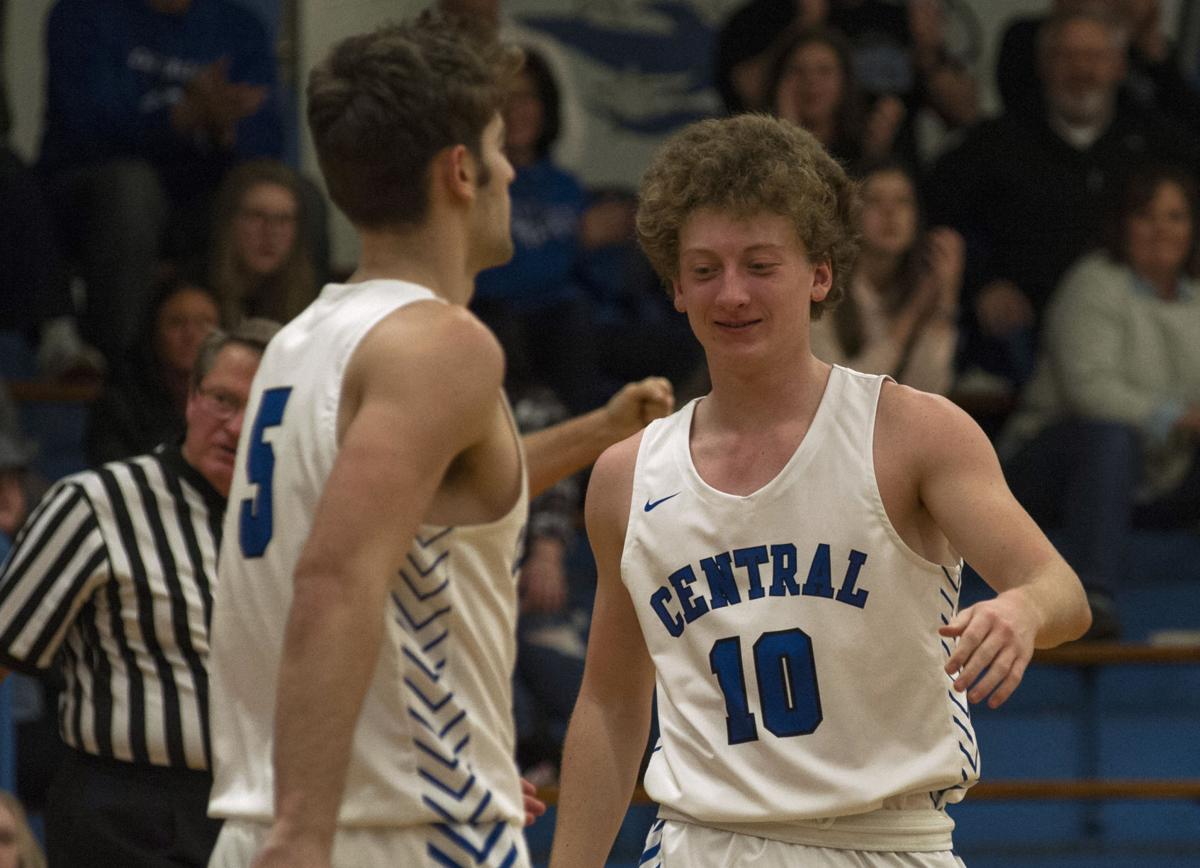 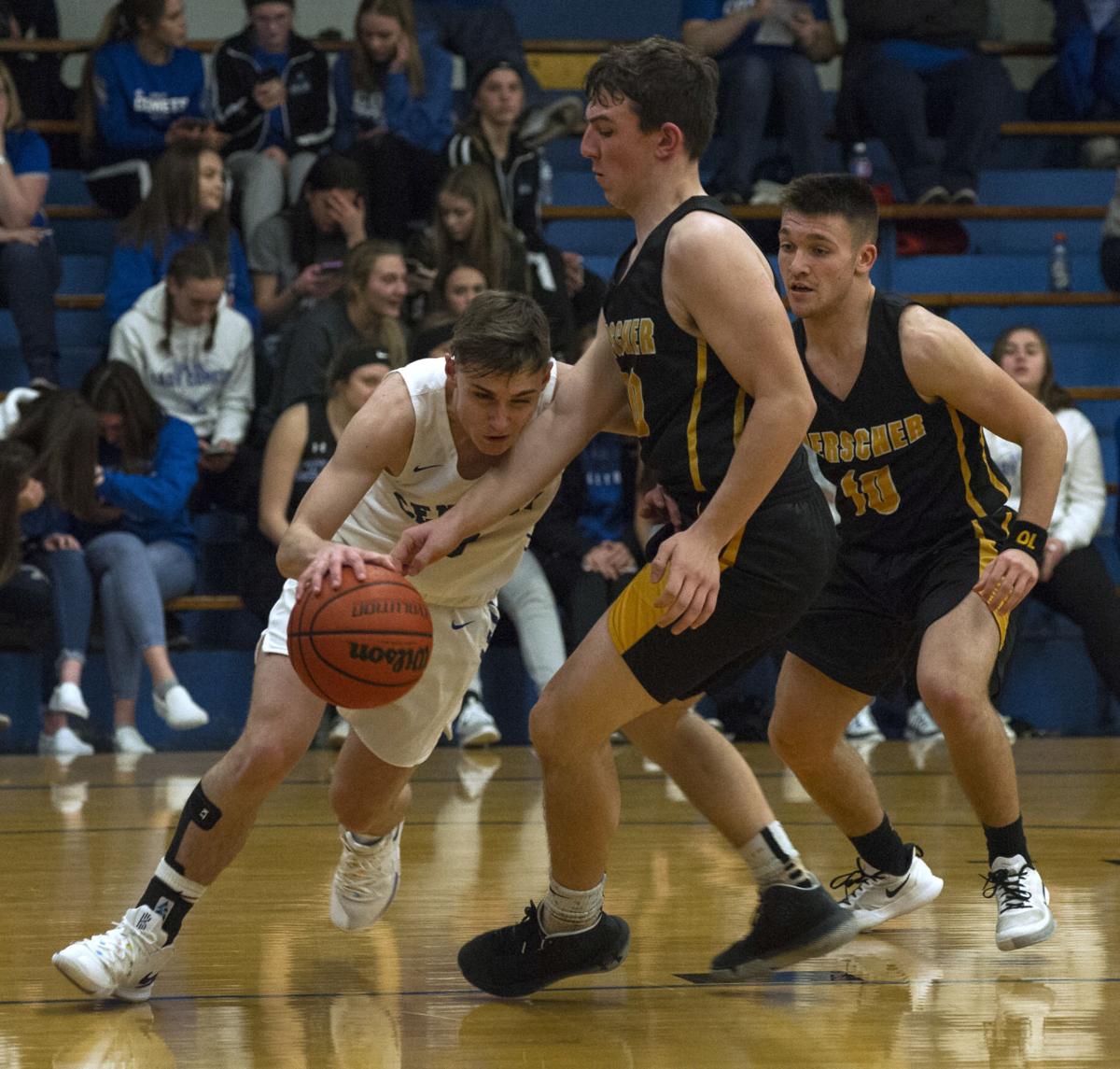 Herscher High School's Camden Berns looses control of the ball as he tries to work his way around Central High School's Kyle Peters during Friday night's game in Clifton.

CLIFTON — Friday’s nonconference boys basketball matchup between Herscher and Central doubled as a display of two of the area’s premier scorers, the Tigers’ Jack Holohan and the Comets’ Jacob Shoven, strutting their stuff, but when the game was on the line late, it was neither scoring machine that took the game-winning shot.

The Tigers’ Logan Lunsford, a hard-nosed guard that secured five offensive rebounds in the second half, made the most of the open look that the Comets’ Holohan-focused defense gave him by sinking a short jumper with 16 seconds left, the 11th lead change of the night, to give Herscher a 49-47 win.

“In that moment, it was just a good feeling,” Lunsford said. “I was able to get it in and get it done, but it was a team effort all around.”

The Tigers were the victors by game’s end, but there wasn’t much to be thrilled with early on for the road team Friday. Their first and only basket of the first quarter — a Trey Schwarzkopf 3-pointer — came four minutes into the game as Central emerged with an early 8-3 lead, struggling from the field themselves.

“We told them to keep plugging away and being patient,” Central coach Brent Offil said. “We missed some open looks, but all you can do is get open looks and take open shots.”

The Tigers got another 3 from Schwarzkopf and one from Bascom Jackson to crawl back in the game in the second quarter, but overall, the offenses still were largely stuck in neutral, with Shoven drilling a 3-pointer of his own just before the buzzer to give the Comets a 17-15 lead at the half.

Both offenses were able to find a little more operating room in the second half, and as a result, the tempo and scoring in the game increased. Shoven and Holohan each found their respective rhythms and by the time the Comets took a 35-30 lead to the fourth, the stage was set for the two prolific players to lead their teams to a tight fourth frame.

Holohan said that the Comets made an effort to pack the paint on him, taking away his ability to drive to the basket, but as his teammates hit open jumpers, it allowed Holohan, and the Tigers in general, to get in more of a rhythm.

“It made the other team spread out and really helped my driving,” Holohan said. “And we kept hitting open shots later in the game.”

Holhan was primarily the one hitting those shots, scoring 18 of his game-high 22 points in the second half and taking almost total control of the game, specifically on the Tigers’ offensive end of the floor.

“(Central) made it a point to shut him down and he got a little impatient in the first half,” Tigers coach Ron Oloffson said of his senior stalwart. “The second half, we hit a couple, the lane opened and he’s a force inside there.”

Over the five minutes of the game, the teams traded four leads and three ties, starting when a Shoven 3-pointer with 5:29 left brieflt put the Comets in front.

But that was the last field goal Shoven scored as the Tigers’ defense hunkered down on one of the most polished scorers in the Sangamon Valley Conference.

In his place, Nathan Gray took advantage of a little extra space and hit a pair of layups with 90 and 57 seconds left, respectively, each tying the game after Holohan had put the Tigers ahead.

That set the stage for Lunsford to make the game-winning shot. With three Comets focused on Holohan at the right elbow, Jackson found a wide-open Lunsford a few feet outside of the left block, where he caught the ball, turned and delivered a perfect jumper for the go-ahead bucket.

“He’s a competitor, he plays hard — he hardly ever comes out of the game he competes so hard,” Oloffson said. “I’m just really proud of Logan.”

The Comets got one last look, as the Tigers paid just as much attention to Shoven as they did to Holohan, which left Jay Lemenager with an open look from beyond the arc, one that sharply fell off the rim and harmlessly to the ground as time expired.

“We were gonna make the other guys beat us ... “ Oloffson said. “It never works out perfect, but we didn’t let their best player beat us.”

Holohan added nine rebounds, three assists, two steals and a block to his game-high 22 points. Lunsford had 11 points, eight rebounds and a steal. Jackson and Schwarzkopf had six points apiece.

Both teams will hit the court again Tuesday at 7 p.m. The Tigers host Dwight and Central will travel to Grant Park.