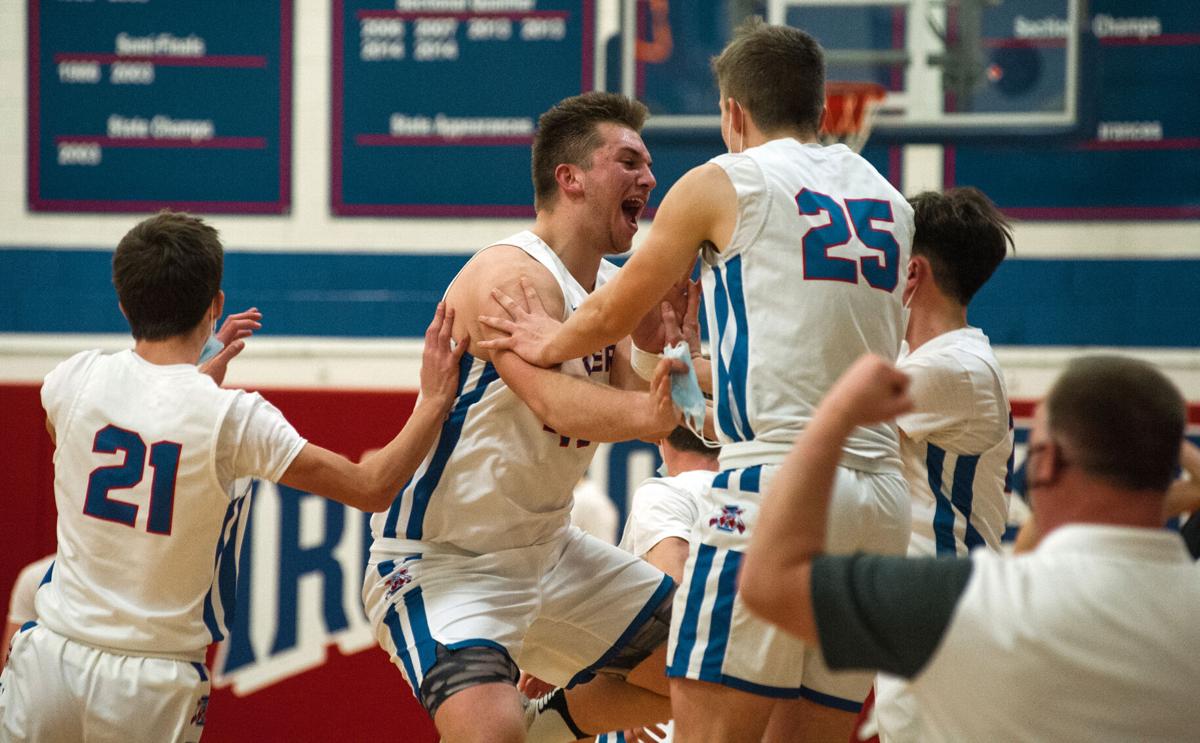 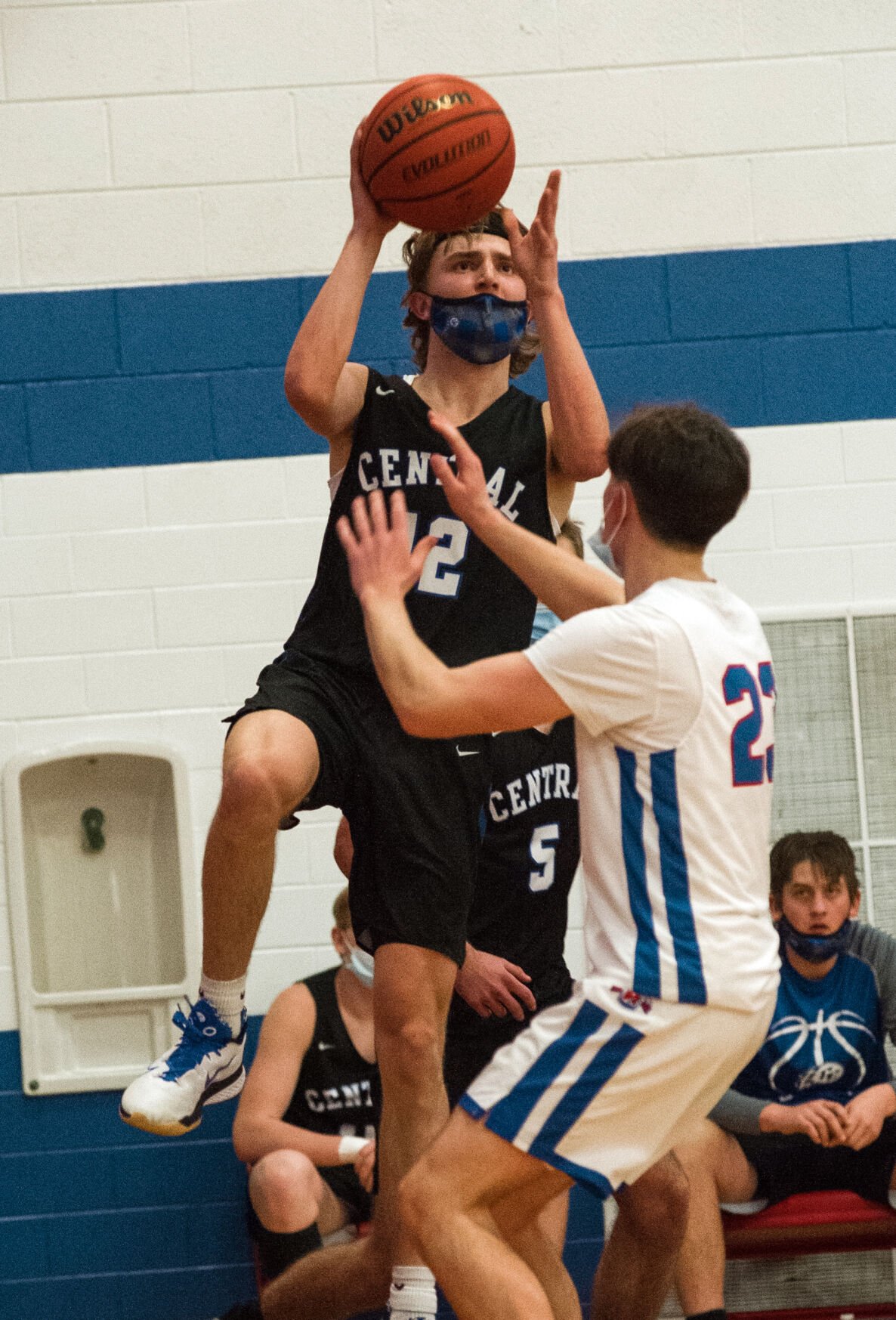 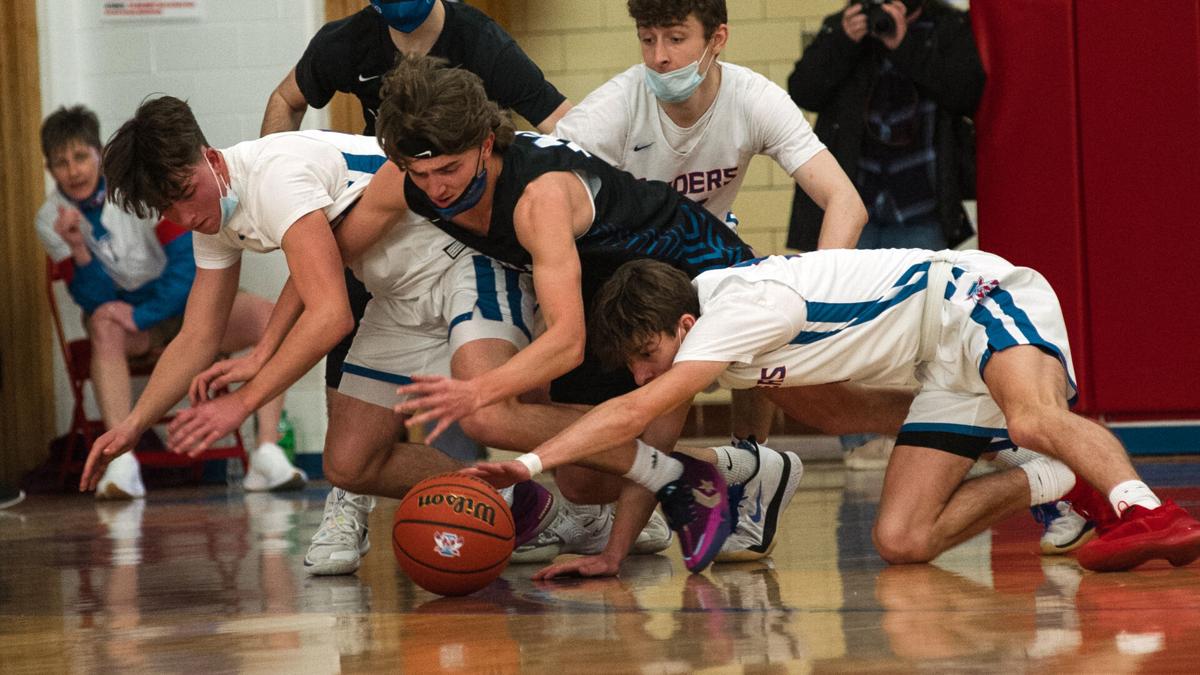 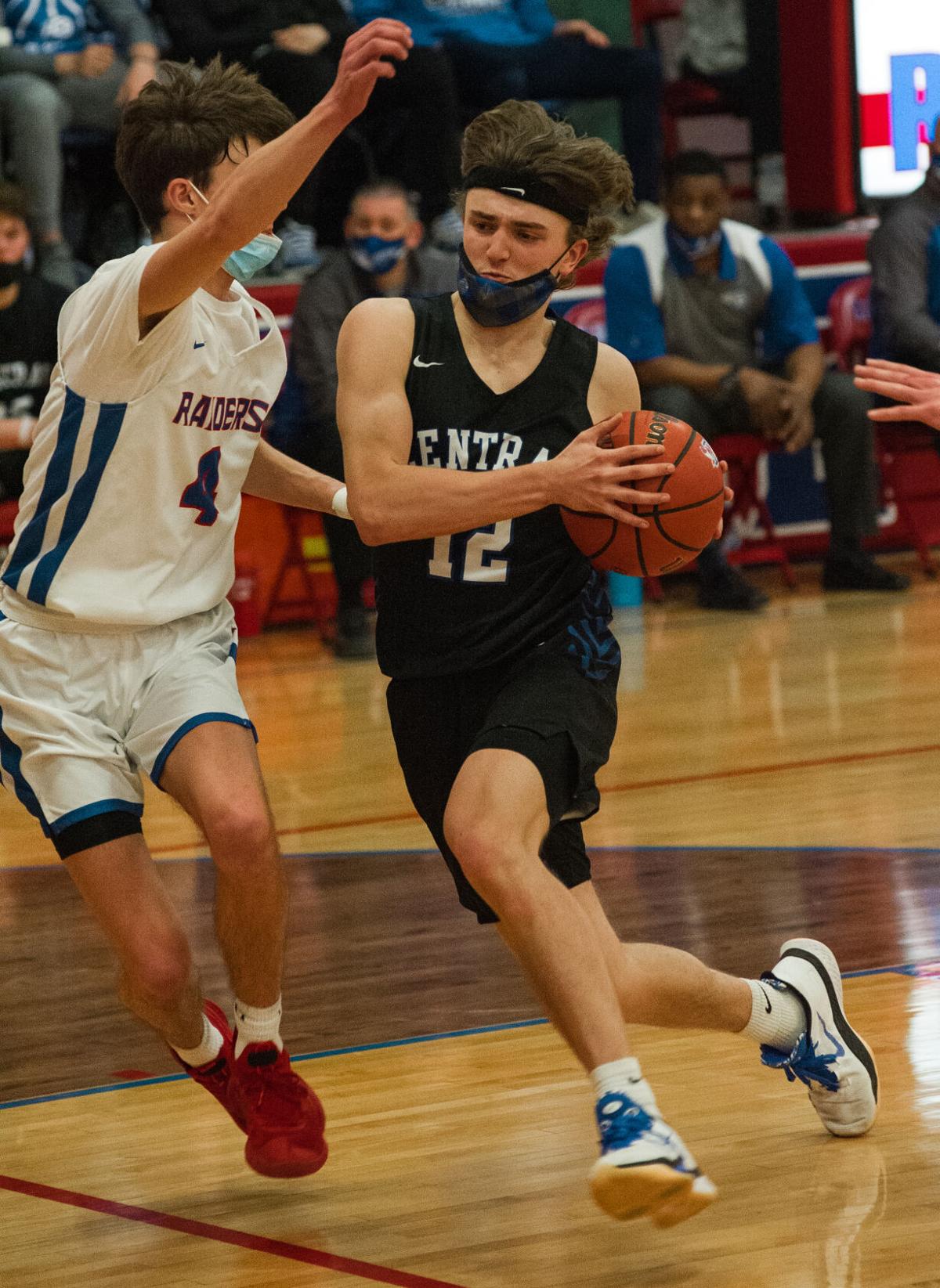 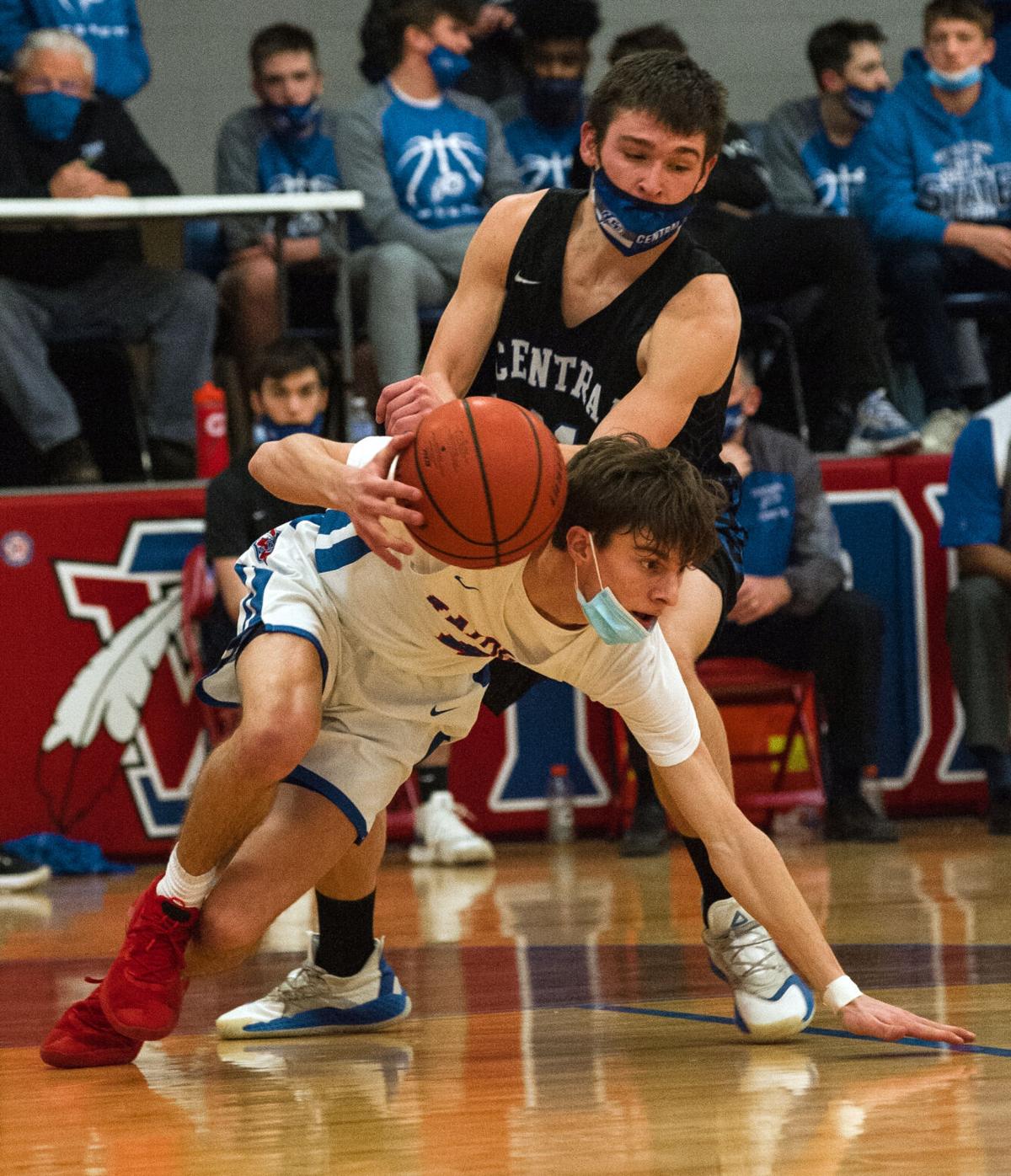 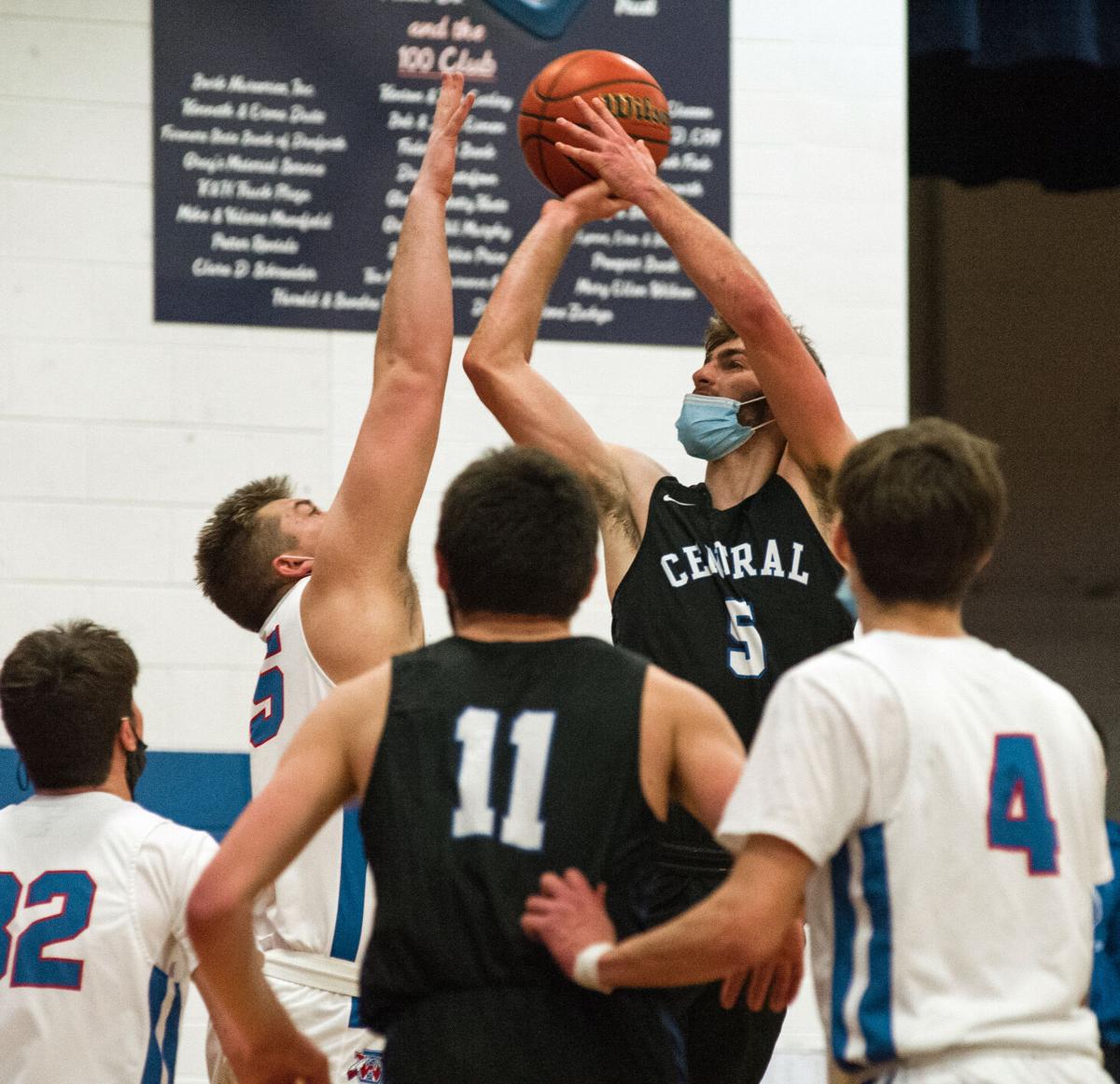 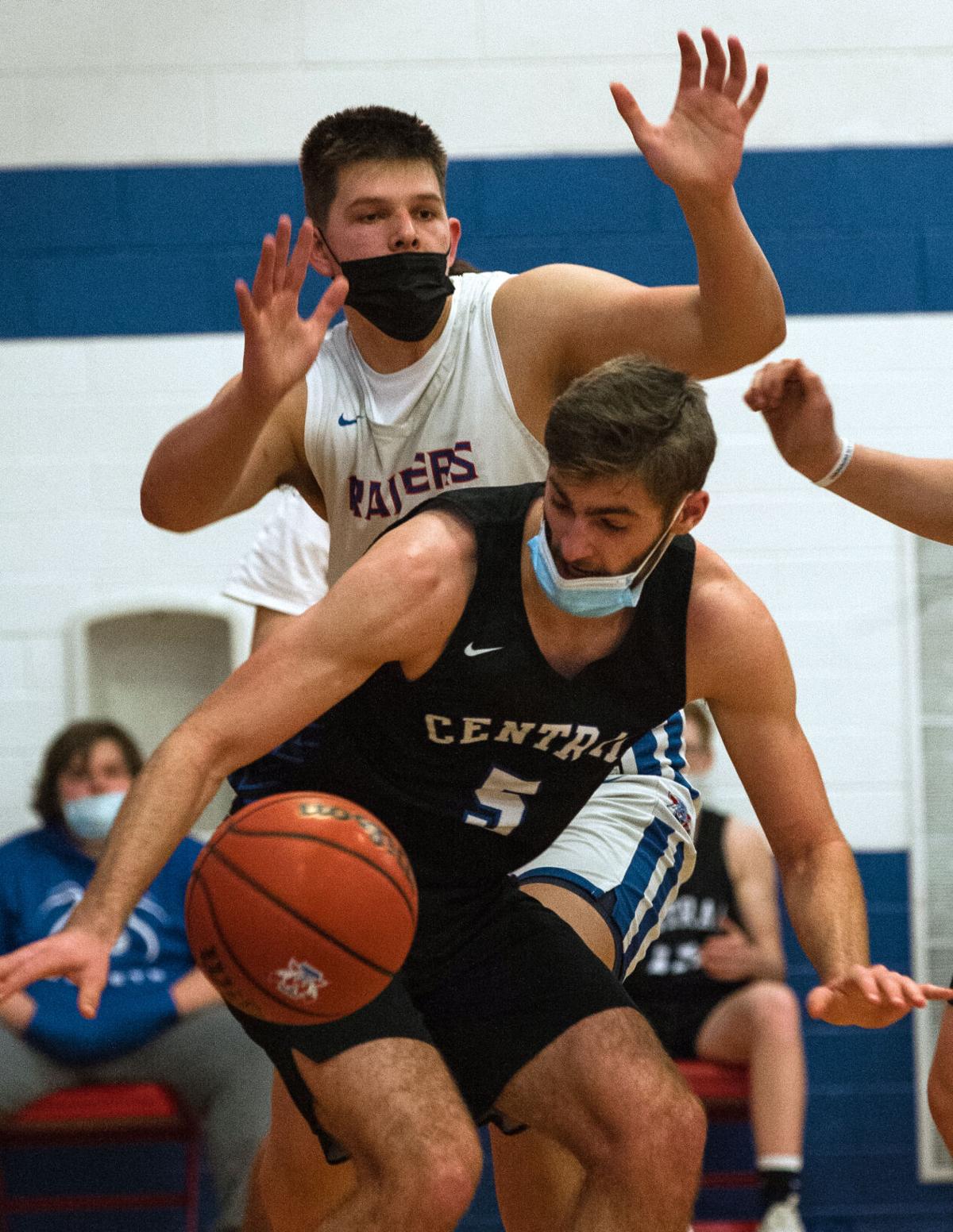 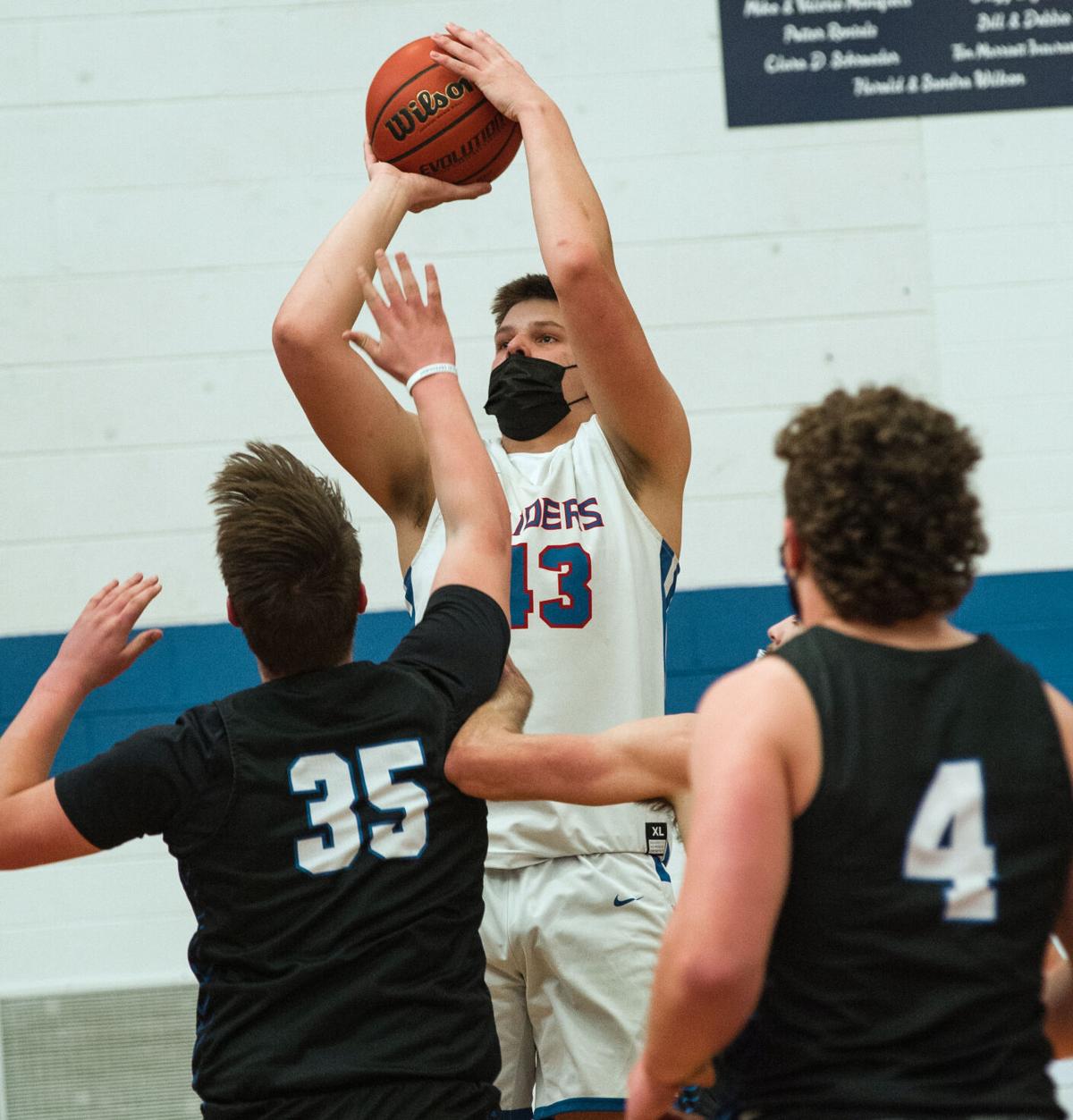 Iroquois West High School’s Cannon Leonard elevates for a shot as Central High School’s Ryan Kohler tries to get a hand in his face to defend during Saturday night’s conference tournament championship game in Gilman. 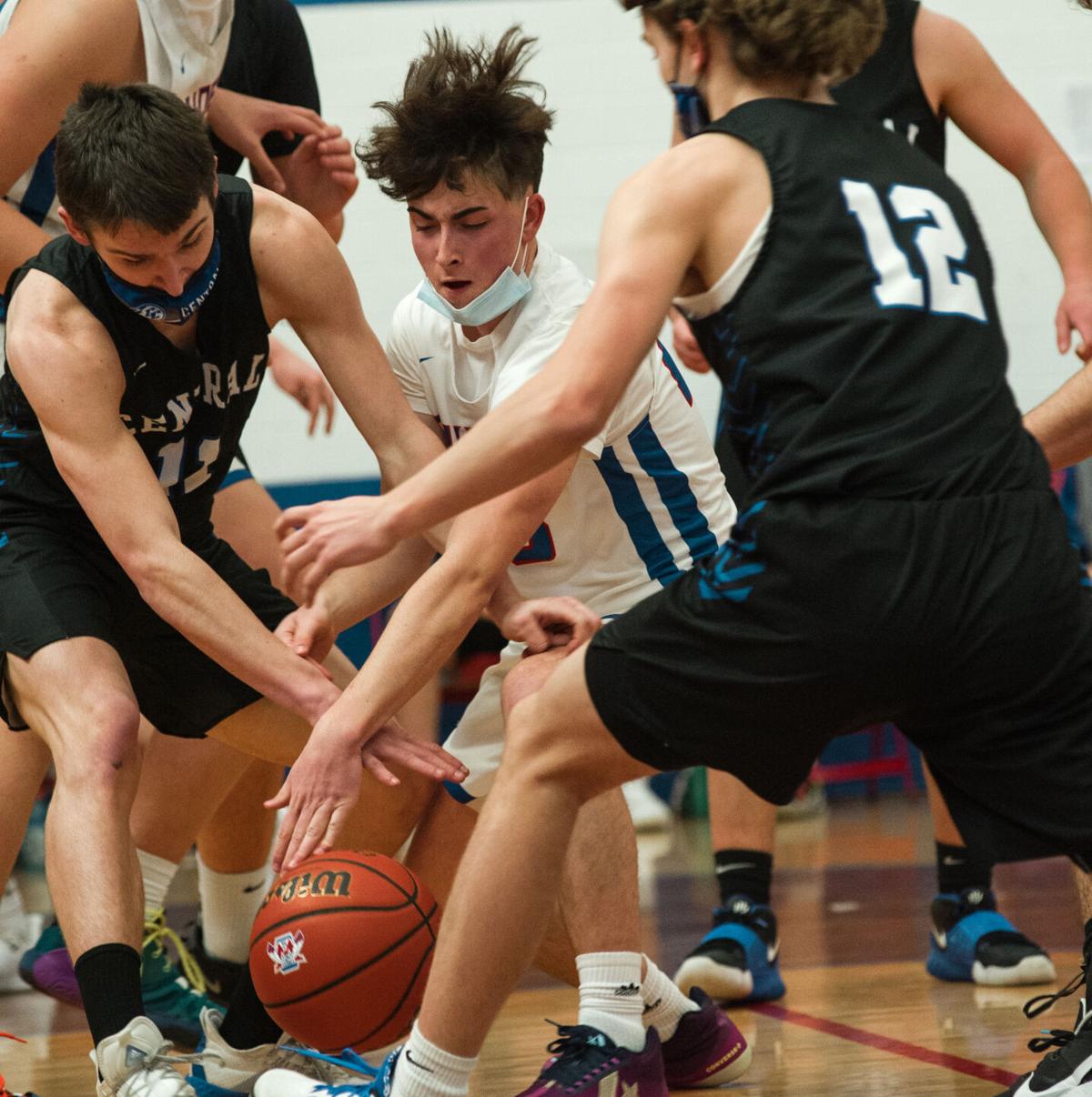 Iroquois West High School’s Cannon Leonard elevates for a shot as Central High School’s Ryan Kohler tries to get a hand in his face to defend during Saturday night’s conference tournament championship game in Gilman.

GILMAN — Heading into Saturday night's Sangamon Valley Tournament Conference Tournament championship game on its home floor against Central, the Iroquois West boys basketball team knew it would have to fend off one of sports' oldest cliches to lay claim to the final SVC Tournament trophy.

After defeating the Comets in both regular season matchups, the Raiders proved while beating the same team a third time is the toughest feat in sports, it is possible, as they held off Central for a 51-50 victory to hoist the SVC trophy in the conference's final season.

“We knew it wasn’t going to be like the second time we played them,” said senior Raiders guard Jack McMillan, referring to the 47-30 win Iroquois West earned March 5. “We knew Central was going to come out with everything they had. They've got some good players in [Jacob] Shoven and [Jay] Lemenager, and they went on some big runs, but we knew we had to battle back and keep our composure.”

The game was a contest of runs with the most important proving to be one that ended early. Down 51-46 with 2:28 left in the game, the Comets went on to outscore the Raiders 4-0 with two chances to win it in the final seconds.

Shoven, who led the Comets with 20 points, missed a solid look from mid-range with about five seconds left that would have put the Comets up by a point. Shortly after, the Raiders missed the front end of a one-and-one free throw that allowed Lemenager to get free in transition, but he fumbled the ball on his way for a buzzer-beating layup attempt to win it as time expired.

“We had [Shoven and Lemenager] on either side of the back screen in the corner, and Shoven had a good look, but it just didn’t go in,” Parnell said. “We still had our chances on the missed free throw. We pushed it, and we just didn’t get a clean catch on the fast break, and the clock ran out on us.”

Central started the contest out strong, thanks to incredible shooting by Shoven, who scored 14 points on 6-for-8 shooting in the first quarter. His efficient opening quarter, as well as the suffocating defense from the Comets' full-court press, helped Central end the quarter on a 9-0 run. When that lead hit double digits early in the second quarter, Raiders coach Zach Monk said he knew his team needed to regroup.

“I told my guys not to panic,” Monk said. “I told them we're a good defensive team and offensive team; I know 11 points seems like a big hole, but I knew the way we could shoot the ball that we weren’t out of it by any means.”

Shoven’s hot start started to slowly fizzle out about halfway through the second quarter. Iroquois West then was able to start finding its shooters in McMillan and Ryan Tilstra, who accounted for 14 of the Raiders' 20 second-quarter points. The two seniors combined for a perfect 4 for 4 from deep in the second, which helped allow the Raiders to cut into the Comets' early double-digit lead before they went on to steal a one-point lead at the break after Tilstra got a put-back layup off a McMillan miss at the buzzer.

“I thought Shoven hit a lot of tough shots in the first half, so we didn’t want to change too much,” Monk said. “We just wanted to take away some of those face cuts opportunities that he had, but the way he was shooting in the first half, I don’t think a lot of guys can continue that for 32 minutes.”

With the exception of an early third quarter tie at 33 apiece, the Raiders never looked back before going on to win it. As hairy as the finish was, Iroquois West never trailed at any point in the second half, as it leaned on its sharpshooters to carry the Raiders out with a win. McMillan scored 8 of his team-high 22 points in the second half. Tilstra scored 9 of his 16 points in the final two frames.

The victory for the Raiders allowed them to end the season on a win with the SVC Tournament crown as they concluded the season 12-4 overall.

“It’s an amazing feeling winning the SVC Tournament championship and ending the season on a win,” Monk said. “This is my fourth year here, and my first couple years here we struggled, but with this senior group, I knew what we had coming.

“This was one of our goals moving forward -- to compete for some type of hardware -- so to come home with some on our home court in the last game for these seniors is just an awesome feeling.”

In the final SVC girls basketball tournament ever, Watseka prevailed in fitting fashion to put a cap on an unblemished four-year run in conference play.

The Dragons came roaring back from a steep deficit before the Cardinals closed the door in a game that ended the careers of two strong senior classes and Dragons coach Bryce LaMore.