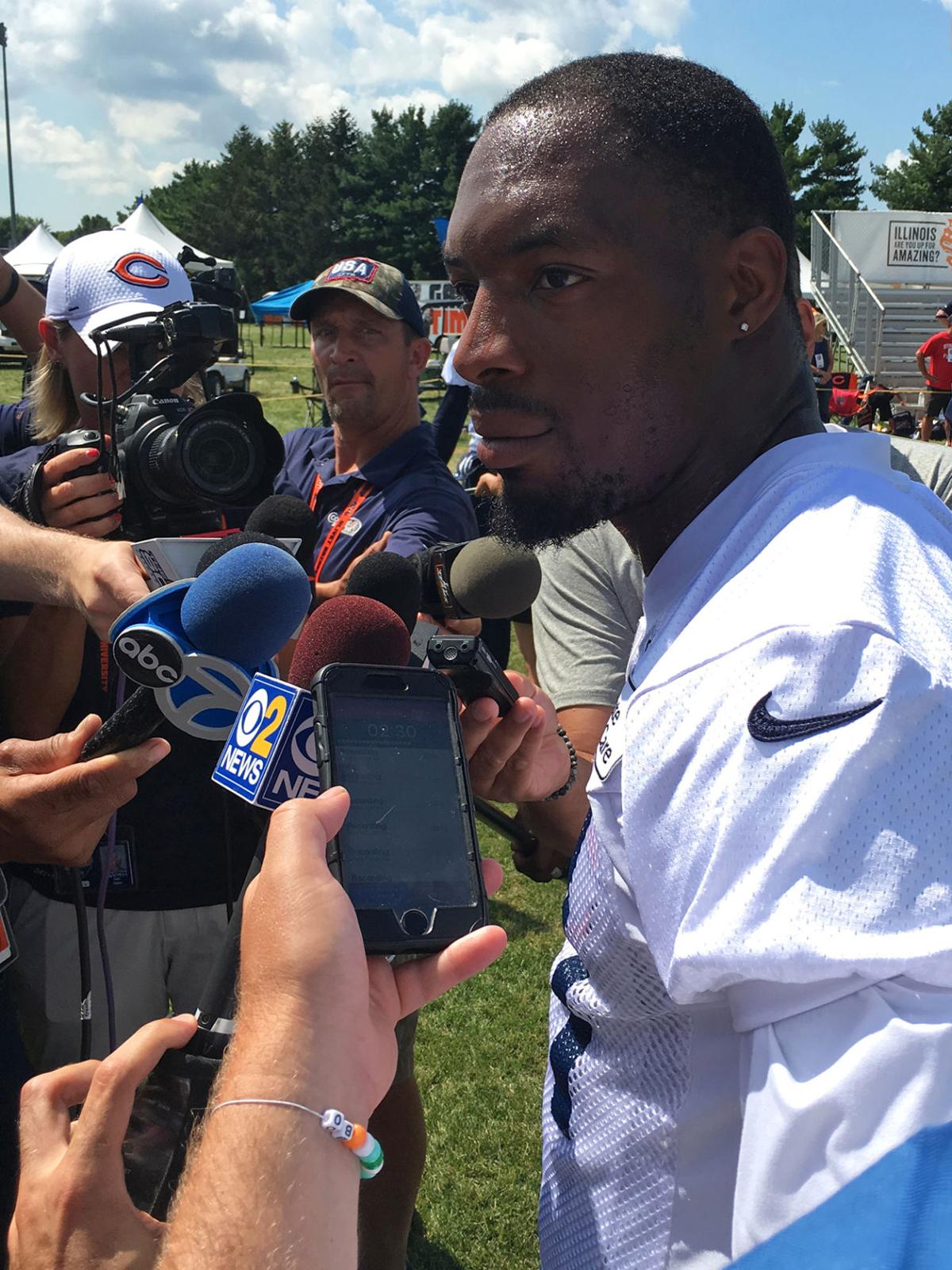 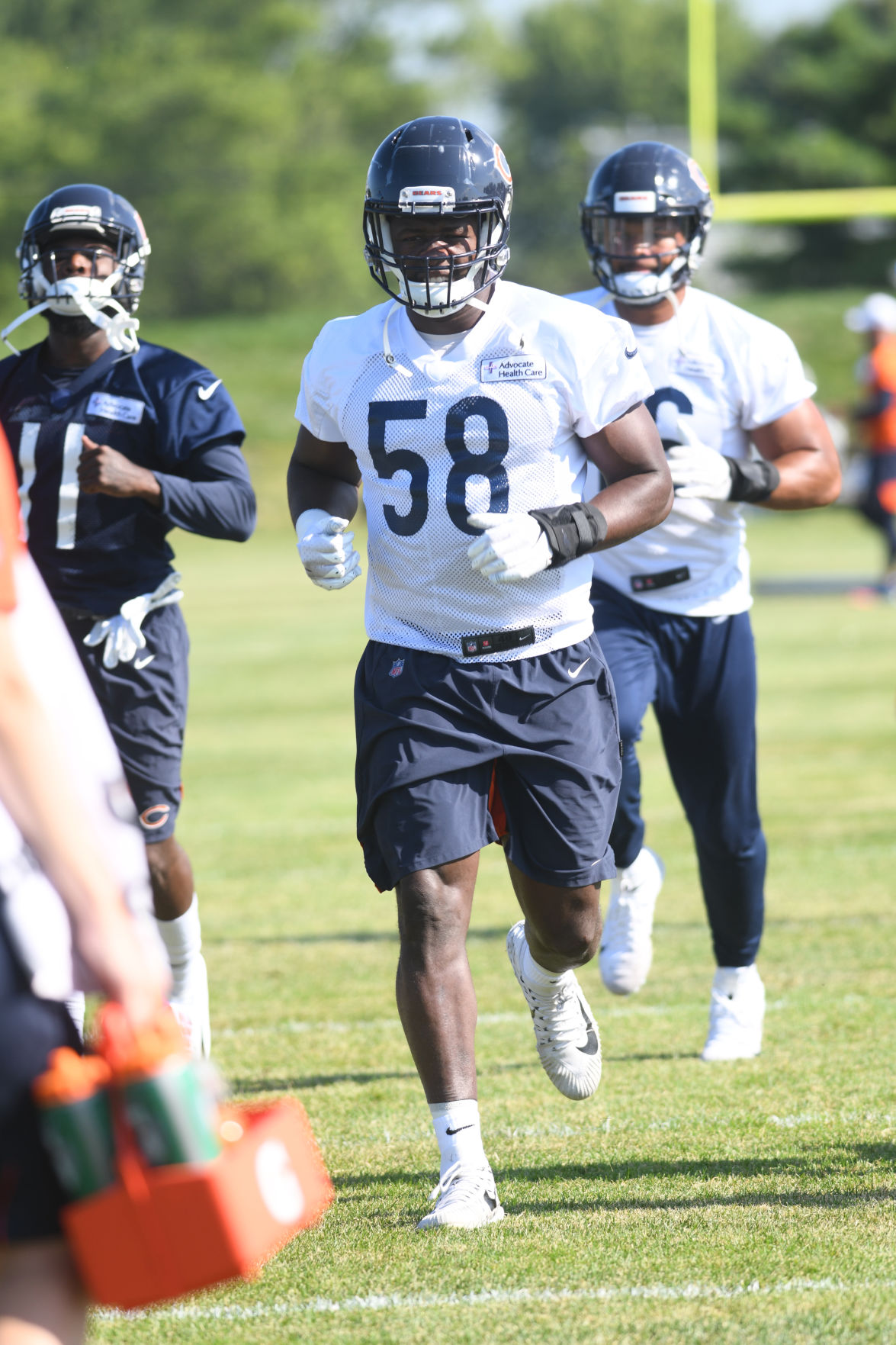 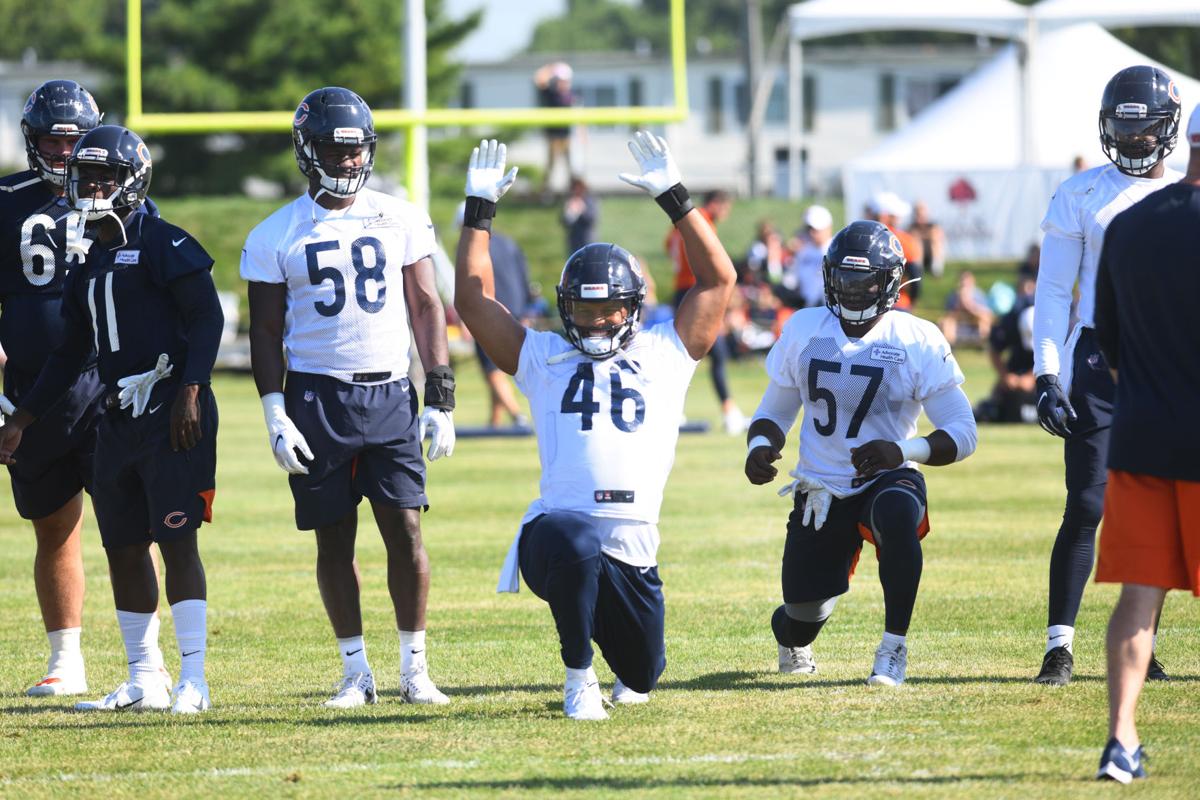 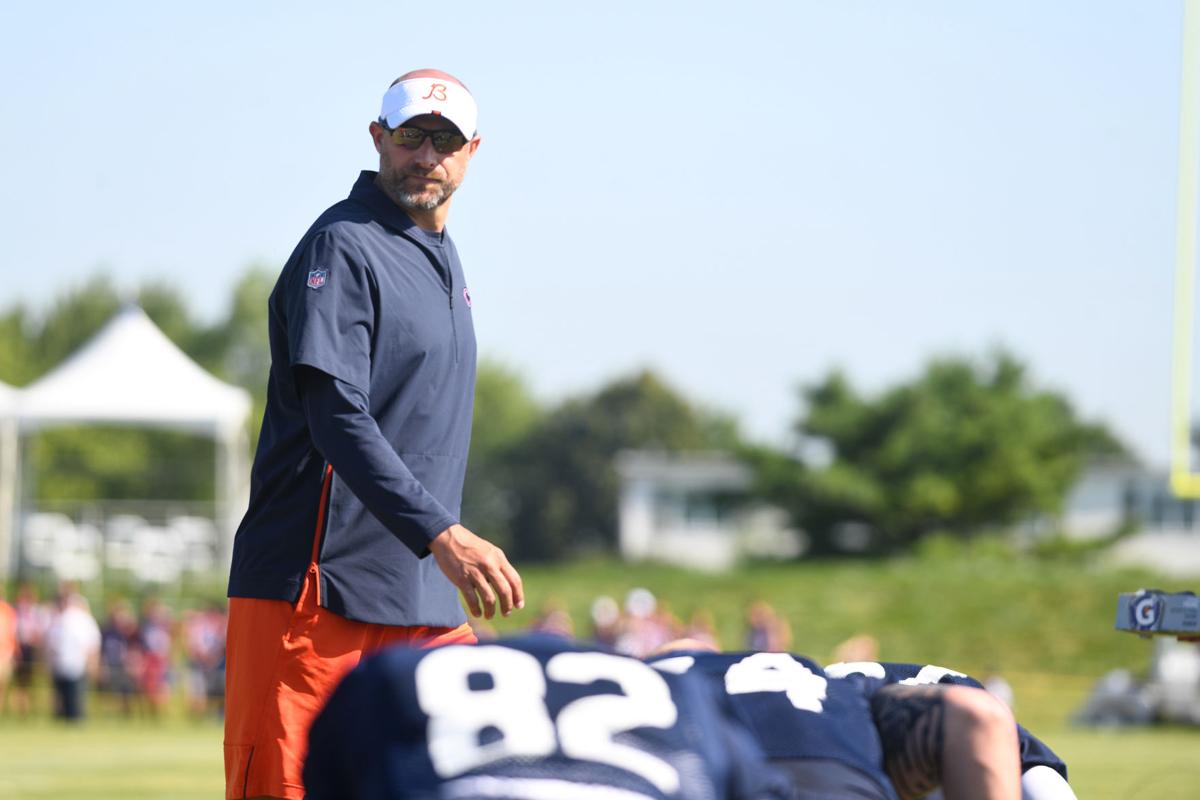 Chicago Bears head coach Matt Nagy observes players during warmups Tuesday before practice, which was closed to the public, at Olivet Nazarene University. 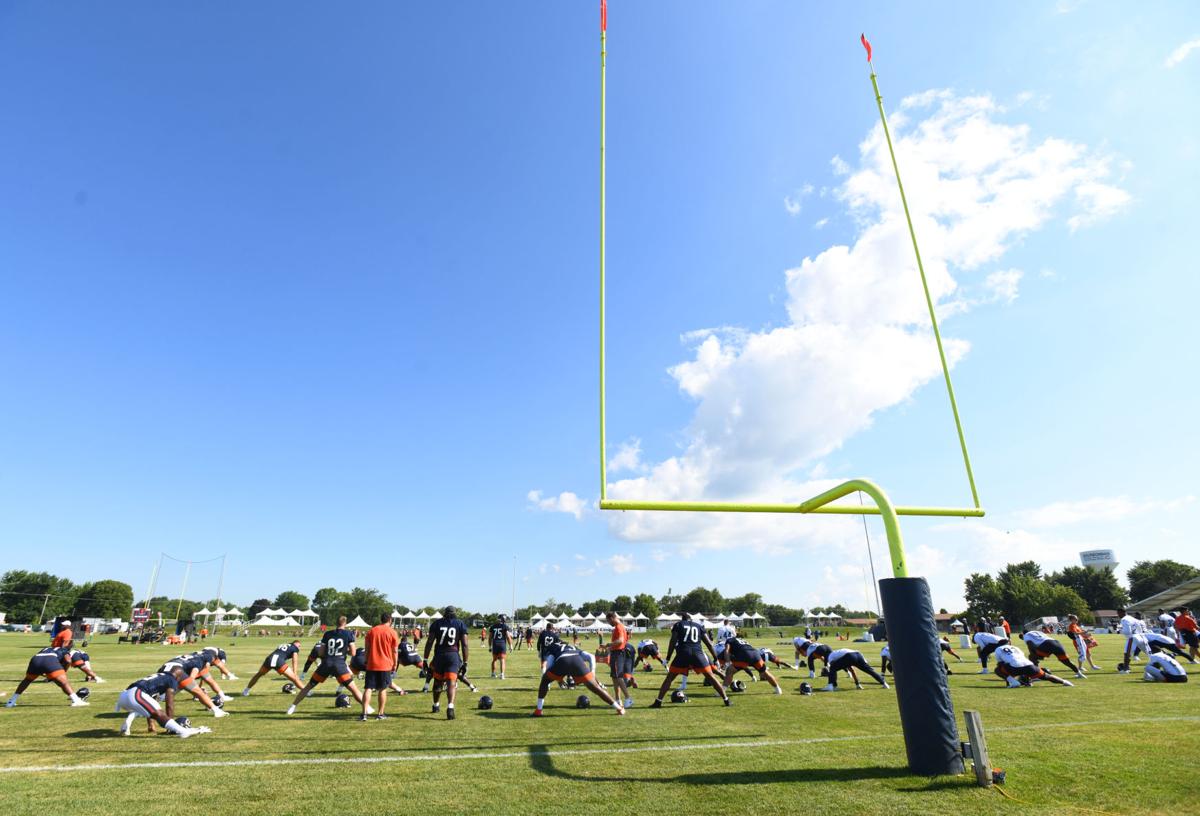 Chicago Bears players stretch Tuesday before practice, which was closed to the public, at Olivet Nazarene University.

Chicago Bears head coach Matt Nagy observes players during warmups Tuesday before practice, which was closed to the public, at Olivet Nazarene University.

Chicago Bears players stretch Tuesday before practice, which was closed to the public, at Olivet Nazarene University.

After throwing on full pads for a couple of days, the Chicago Bears took Tuesday morning’s practice as a chance to lay off the gas a little bit and held a light, abbreviated practice with just helmets.

With a day off Wednesday, the Bears also used Tuesday to give some veteran players, most notable defensive lineman Akiem Hicks and linebacker Khalil Mack, an extra day off to recover from the past few days, off days referred to as veteran days.

“We had a couple guys, we gave them some vet days, so that was good for them,” coach Matt Nagy said. “I think for some of our younger guys to get some reps during this day is also good.”

While some key pieces of the Bears’ defense had the day off, Tuesday also marked the return for one of the newest pieces of the unit, safety Ha Ha Clinton-Dix.

Clinton-Dix suffered a lower body injury during the last session of the last day of offseason training activities (OTAs) and was on the physically unable to perform list for the first few days of training camp, but the sixth-year safety was ready to get back in the fold Tuesday.

“I know (the team) wanted to be careful with me and take it slow,” Clinton-Dix said. “We don’t play until September, so they wanted to just be careful and make sure I was ready to go.

“They gave me a couple more days and I’m excited to get back out here with these guys.”

Clinton-Dix’s official return in the defensive backfield at the strong safety spot has reunited him with free safety Eddie Jackson. The duo were teammates in college at Alabama in 2013, familiarity that will help Clinton-Dix as he learns a new team and new scheme.

“Being back with Eddie, it’s about trust and I trust him with my daughter,” Clinton-Dix said. “These guys have done everything in their power to make me feel comfortable.

“No big egos, everybody loves the game of football and it’s a special group.”

Mack, who was last season’s prized defensive pickup, was ecstatic to see this year’s big acquisition back in the fold, even if he himself had the day off.

“It’s gonna be fun,” Mack said. “I was talking to him today and I’m excited to get him out there.”

And Mack wasn’t the only one enthused about Clinton-Dix’s return. Nagy was also ready to see his new strong safety on the field and said that Clinton-Dix seemed to pick right back up from where he left off in the offseason.

“He had a great OTAs with us mentally, running around physically and he just had that little deal there at the end,” Nagy said. “I like where he’s at and it’s good for him to get out there.”

Clinton-Dix is just one of two newcomers to the Bears’ starting defense, joined by Nickel cornerback Buster Skrine. With so much talent returning to last year’s top-ranked defense in the NFL, the competitive environment Clinton-Dix has come into is something that he isn’t taking for granted.

“I’m so motivated,” Clinton-Dix said. “The guys around me make the game so much fun and when you’re passionate about something, when it means so much to you, not just one person or two (people), everybody, it’s a special unit here.

“Everybody wants to win and compete.”

The Bears will start the regular season against division rivals, the Green Bay Packers, in September. The Packers’ first round draft pick in 2014, Clinton-Dix spent four-and-a-half seasons in Green Bay before a midseason trade to Washington last year.

But for Clinton-Dix, there’s no added motivation by playing his former team week one, as the opportunity to play for a Super Bowl with the Bears is inspiration enough on its own.

“It’s not about competing against Green Bay, it’s about winning here — creating that culture that’s already started last year,” Clinton-Dix said. “Once I got the chance to come here and play with the Chicago Bears, coach Nagy and this defense, I had to take that offer.

“It’s another game and I plan on going out there and giving it my all.”