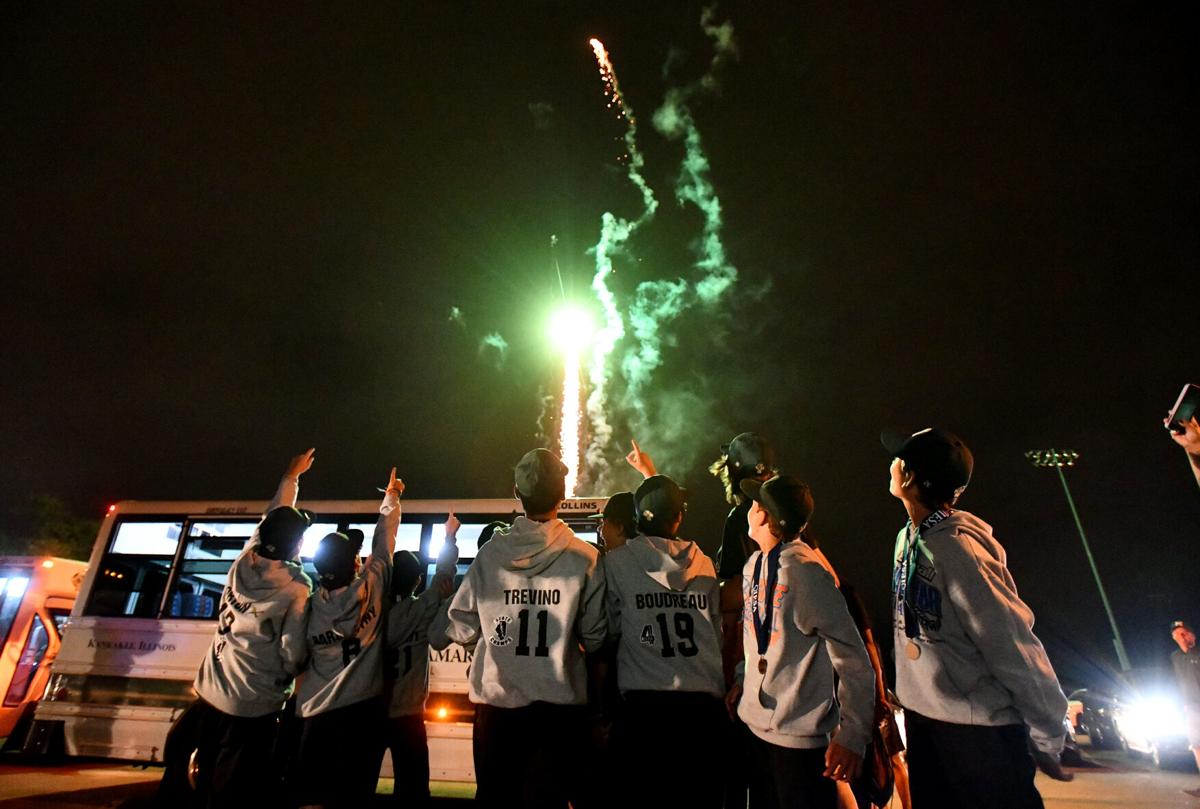 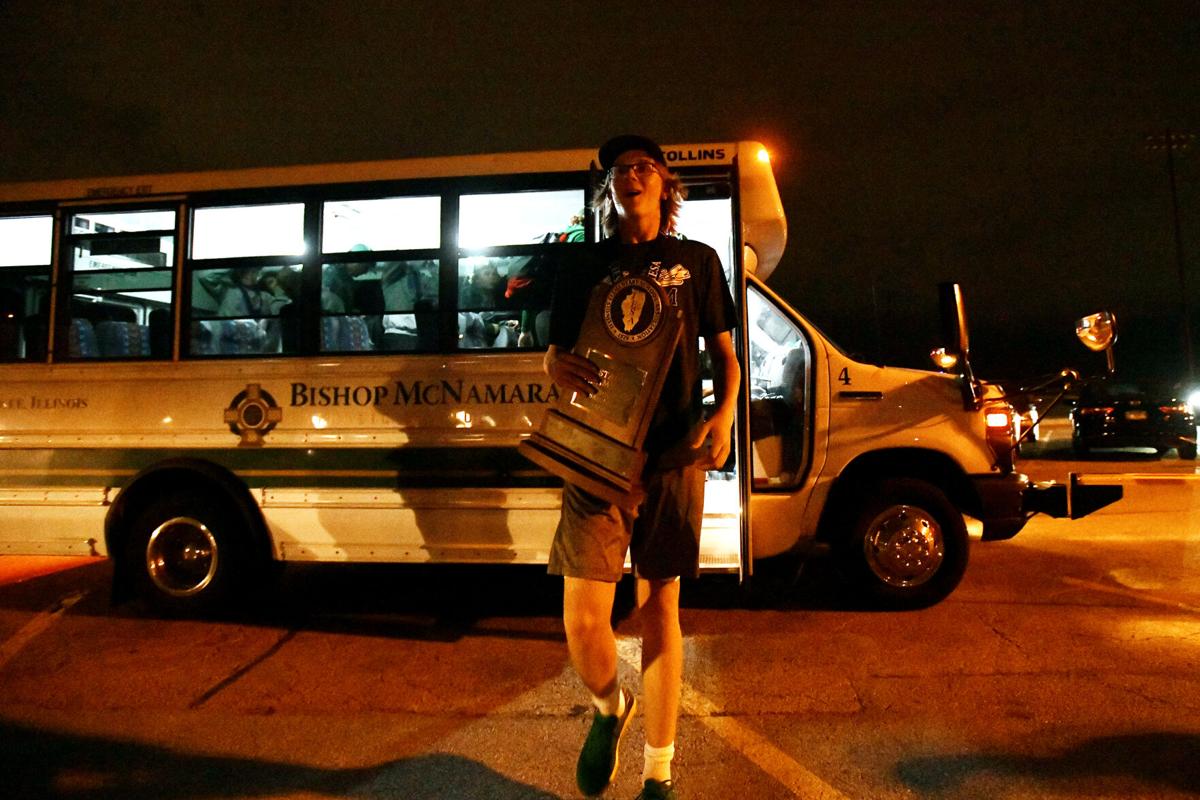 Callaghan O'Connor carries the IESA State championship trophy off the bus Monday night as the team returned to a cheering crowd at the school. O'Connor contributed two home runs toward the team's victory. 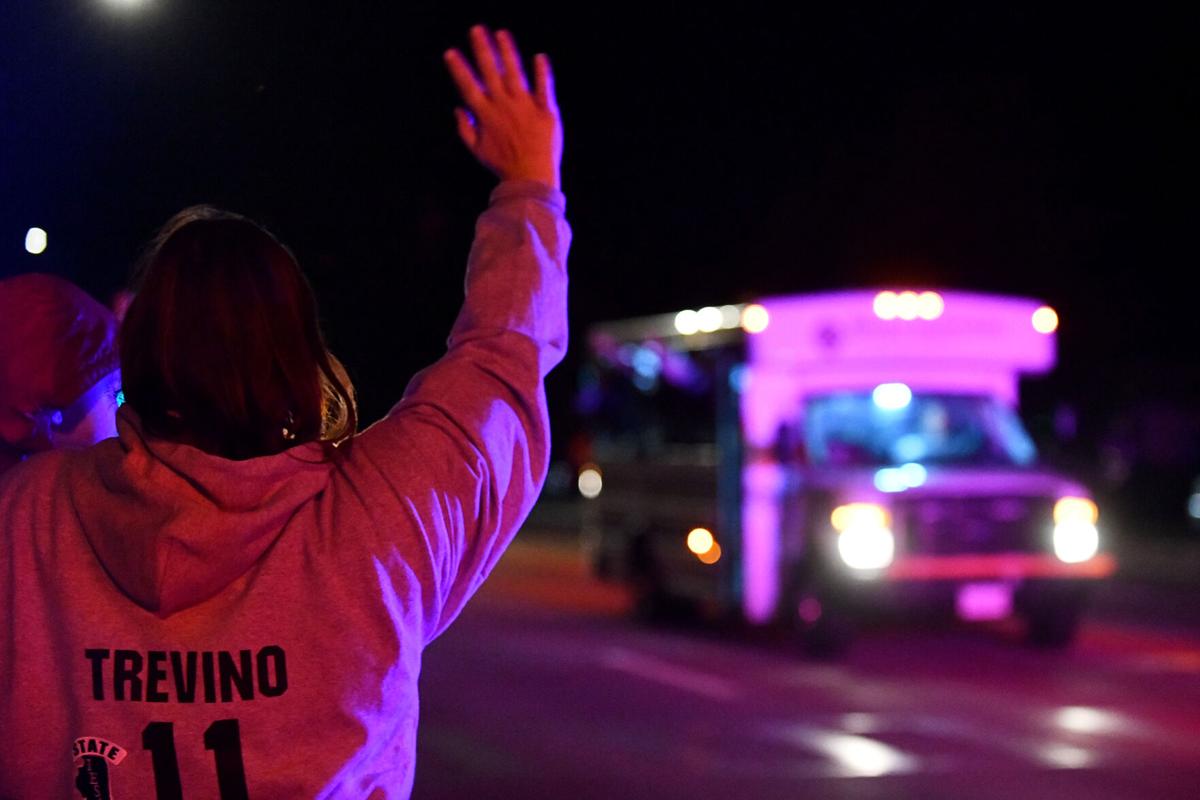 Callaghan O'Connor carries the IESA State championship trophy off the bus Monday night as the team returned to a cheering crowd at the school. O'Connor contributed two home runs toward the team's victory.

When the Bishop McNamara Catholic School junior high baseball team opened up its season this fall, it did so with one goal in mind. And when an impromptu parade — complete with an escort from Kankakee police and fire — brought the Fightin’ Irish back to town with the 2021 Illinois Elementary School Association State championship plaque, they checked that goal off the to-do list.

After rain delayed Saturday’s state semifinal and championship rounds to Monday, the Irish learned it was worth the wait and topped St. Joseph 4-2 in the semifinals Monday afternoon before outlasting Maroa-Forsyth 7-6 in Monday night’s championship game at Eastside Centre in East Peoria.

“I’m so proud of them. This group had in their minds from Day 1 they wanted to win state. They thought they were capable of it and talented enough, and [assistant coach Kurt] Quick and I thought the same thing. They did everything we asked every day, stayed invested, and it paid off.”

Callaghan O’Connor, who fanned 11 batters in 6 1/3 no-hit innings in Friday’s 6-0 quarterfinal win against Teutopolis (who knocked the Irish out in the 2018 quarters), was the offensive hero of the title game. After he socked a two-run home run to give the Irish a 4-0 lead in the second inning and then was intentionally walked in his second-at bat, Maroa-Forsyth once again decided to pitch to the lanky slugger in the top of the sixth in a 6-5 game.

O’Connor returned the offering straight up the middle for a laser beam of a homer over the center-field fence, making it a 7-5 game in what proved to be a pivotal insurance run, as the Trojans answered with a run of their own in the bottom of the sixth.

In the play before O’Connor’s second home run, Ian Irps was thrown out at second base after trying to leg out a double. O’Connor knew had things gone differently, he would have never had the chance to hit what became the game-winning homer.

“The play before me, Ian got out at second, but to be honest, that would have changed the whole inning,” O’Connor said. “If he would have gotten on second I would have been walked.”

He admitted to a little rust after a long layoff but was able to buckle down and get the job done.

“It’s been three weeks, so I didn’t have my best outing, but I came back today with a better mindset, and I ended up doing well,” Rainbolt said. “I was just focused on getting the batter, not focused on attitudes or other things going on in the game.”

After his four innings on the mound, he handed things over to Jace Boudreau, who allowed four earned runs on six hits during the final four innings, including a three-run fifth that saw the Trojans cut the deficit to 6-5 before O’Connor’s second blast.

When Boudreau was on the mound to record the final out, he was well aware he had just helped make school history, as the state championship is the first for the grade school at Bishop McNamara, which was formed in 2016 as a merger between Maternity, St. Joseph’s and Aquinas.

“I was excited because we’re the first state champs ...” Boudreau said. “It was exciting, nerve-wracking, intense. I knew there were a lot of people watching, and it was just great to win.”

“We’ve always been successful in sports, and now that the grade schools came together, it’s important to get that going,” Quick said. “The kids get more involved, and I think we’ve been able to implement across all the sports what it’s like coming into high school.

The win Monday night not only put a bow on a state title but also a perfect 17-0 season. Whether it’s moments such as Irps throwing a complete game in Monday’s semifinal game or Cooper Austiff starting a rally from the nine-hole in the sectional finals, Provost knows now that the season is over, there are plenty of moments he’ll look back on in much more detail than he was able to in the heat of the moment.

“There are so many moments that happen in a deep run like this where kids step up and things happen, and you look back and realize we wouldn’t be here if something like that didn’t happen three games ago ...” Provost said. “You know how baseball is; it just takes one play to happen, and that play never happened for us — the kids always made plays, and our pitchers pitched gems.”