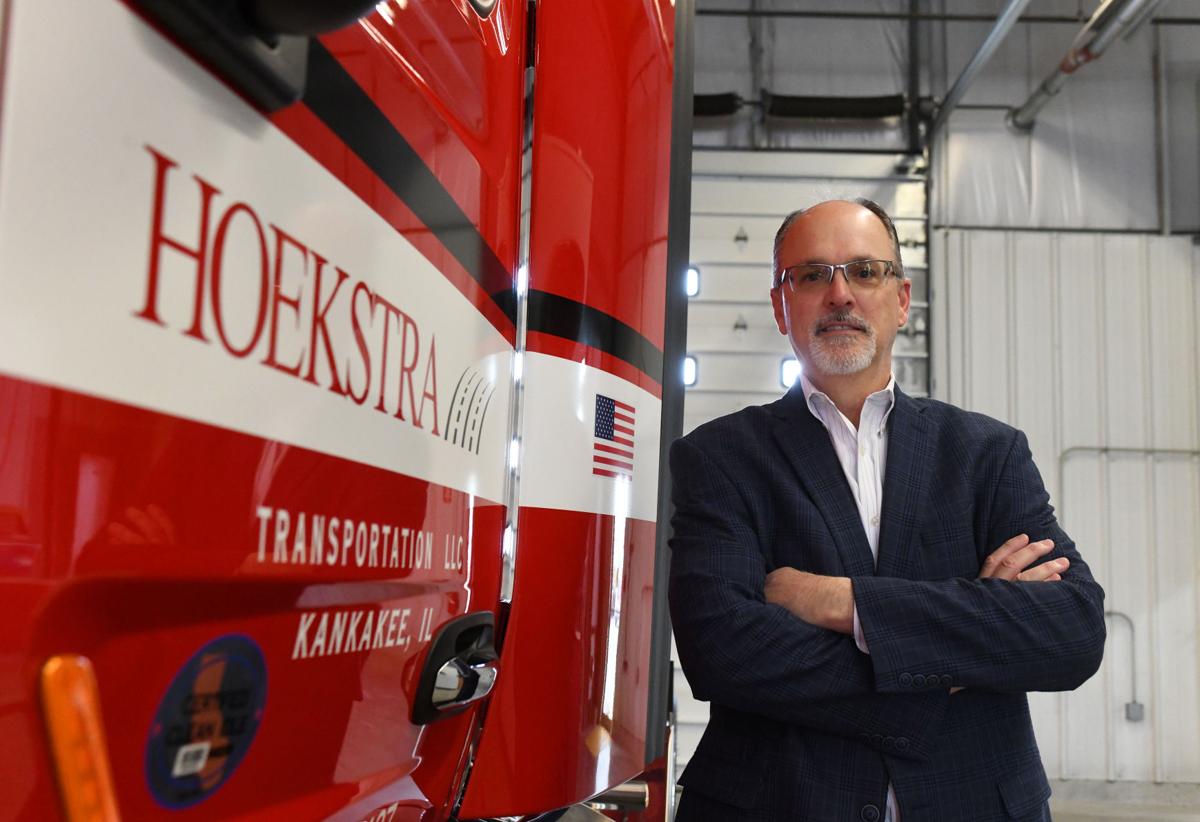 Steve Hoekstra, president of Hoekstra Transportation, stands next to a new truck at the Kankakee location. The company has 700 trailers to go with 90 trucks to serve the Great Lakes states. 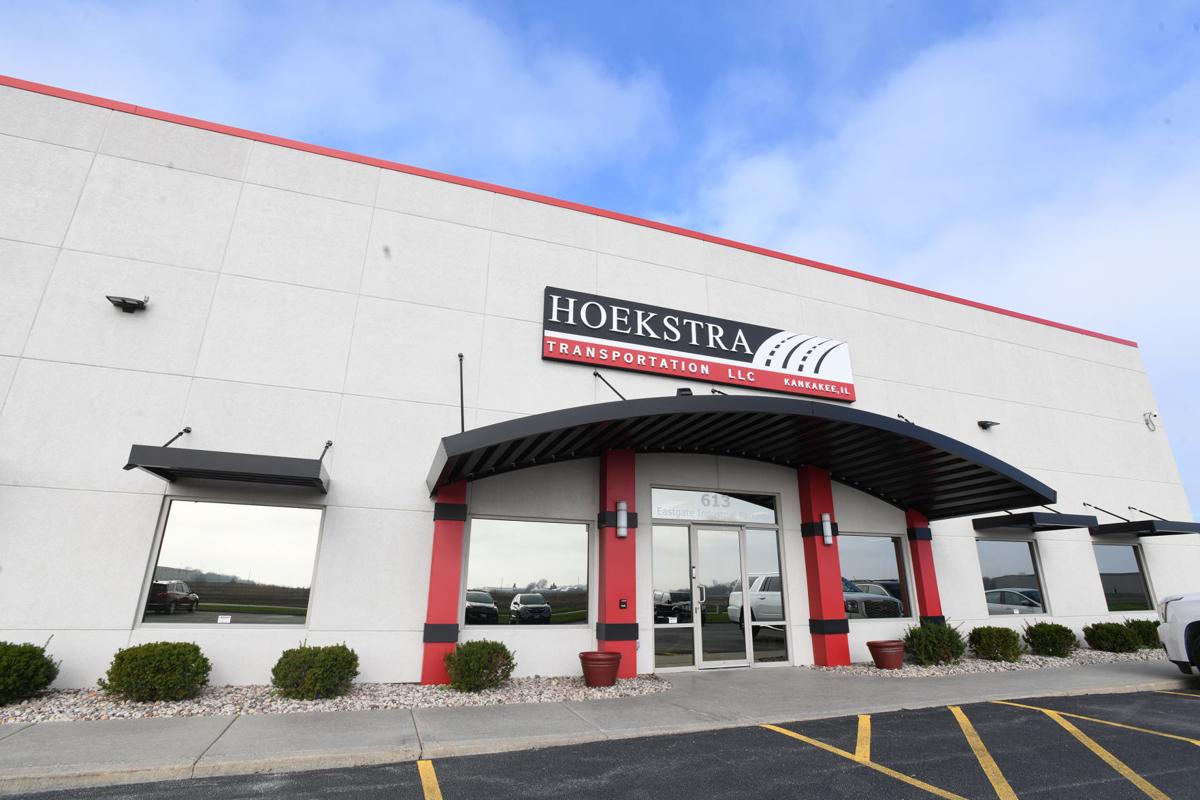 In 2017, Hoekstra Transportation moved from its longtime home in Saint Anne to the Eastgate Industrial Parkway in Kankakee. The new building has allowed for better amenities for drivers, technicians and office personnel. 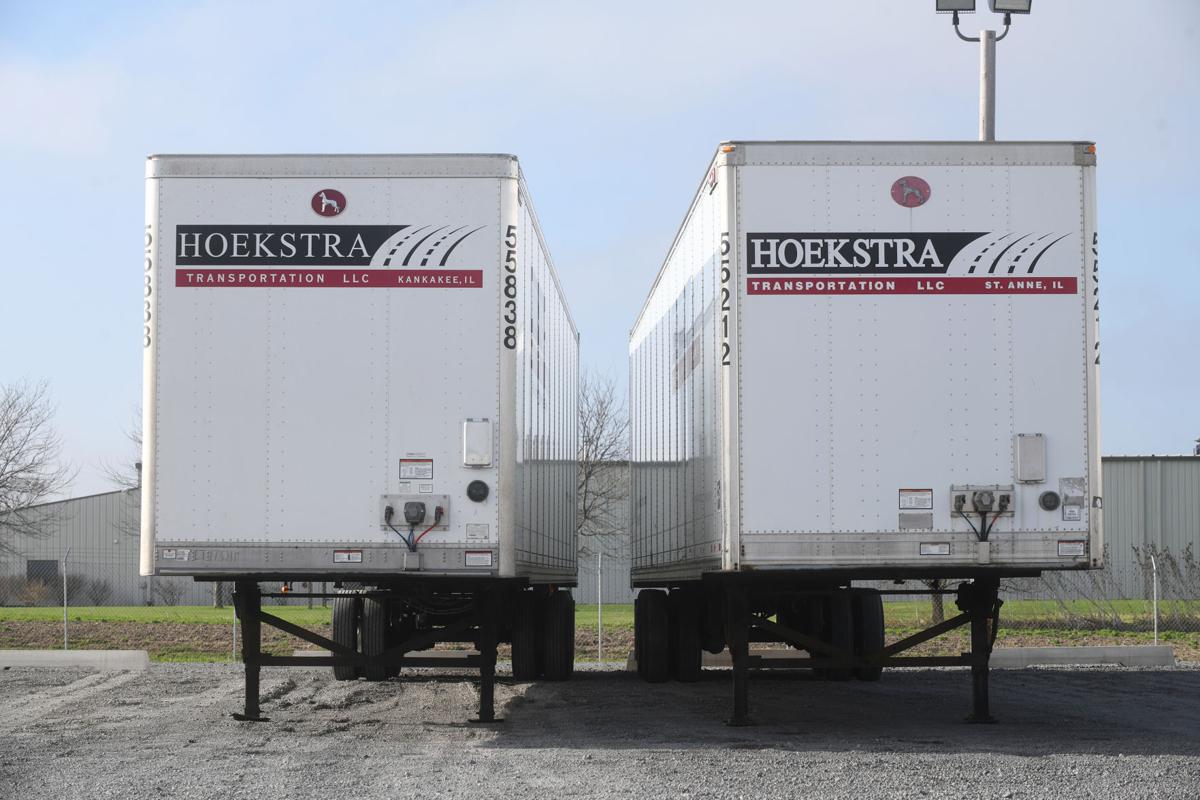 Steve Hoekstra, president of Hoekstra Transportation, stands next to a new truck at the Kankakee location. The company has 700 trailers to go with 90 trucks to serve the Great Lakes states.

In 2017, Hoekstra Transportation moved from its longtime home in Saint Anne to the Eastgate Industrial Parkway in Kankakee. The new building has allowed for better amenities for drivers, technicians and office personnel.

At Hoekstra Transportation in Kankakee, it’s one big happy family. Although that might sound cliched, company president Steve Hoekstra says the company wouldn’t be as successful as it is without the dedication of its team.

“It’s a team effort, it really is,” he said. “The last few weeks with what’s going on in the world, it’s amazing to see how this team has come together.”

Employees have worked flexible hours to ensure the company continues to provide service to its customers, he said.

“Everybody here has done so much,” he said. “That’s an example of the team that we’ve got. It exemplifies our core values. People are stepping up. They’re changing shifts, they’re working longer hours.”

Hoekstra Transportation has been in business for 25 years and has been named Mid-Sized Business of the Year as part of the Daily Journal’s 2020 Progress Awards.

In 2017, Hoekstra Transportation moved from its longtime home in Saint Anne to the Eastgate Industrial Parkway in Kankakee. It’s worked out really well for the company. The new building has allowed for better amenities for drivers, technicians and office personnel.

“We wanted to put an emphasis on making this feel like home with the kitchen and the bathrooms and the showers,” Hoekstra said. “Sometimes the facilities that the drivers have access to are probably not what they have at home. We wanted to make sure that when they were here, it felt like home. That was important to us.

“Our core values are family, safety, integrity and teamwork. When family is one of your core values, you want it to feel like home and that’s one of the things we really focused on and made that a concentration of ours when we moved into the facility, for all the employees not just the drivers.

“The shop is a better facility, the work areas. The layout is similar to what we had but it was all done with a focus, not just the efficiency but also comfort.”

Hoekstra Transportation is remaining busy with grocery store shipments as the nation struggles with disruptions from efforts to curb the spread of COVID-19.

“That’s primarily what we do,” Hoekstra said. “I would say 75 percent of our business is food-related. That would be anything from the finished product to the packaging material. Anywhere along the supply chain of the food product, you’re likely to see one of our trucks.

“Locally, we work with other shippers as well that are not in the food industry, but that’s primarily our market.”

There are 90 people employed at Hoekstra Transportation, which began from a small offshoot operation about 30 years ago.

“We started as part of William Hoekstra and Sons,” Steve said. “That was my grandfather, dad and uncle. I always had an interest in trucks. I’ve been driving a semi since I was 16 and continue to drive today.”

William Hoekstra and Sons, which goes back four generations, bought a paper-hauling business out of Watseka, and Steve Hoekstra was given the responsibility of ensuring it ran smoothly. It coincided with deregulation in the trucking industry.

“That’s when Quaker Oats had their pet food plant here in town,” Hoekstra said. “[We] knocked on a door there and that really opened up the door for us to find our niche — the short haul, regional grocery business. It kind of just evolved from that start. ... We’ve been focused on transportation, doing what we’re doing for 25 years.”

Hoekstra Transportation also has 700 trailers to go with the 90 trucks to serve the Great Lakes states.

“In the industry it’s a high trailer-to-tractor ratio, but we do that because of the nature of our business,” Hoekstra said. “We’re a short haul, regional carrier, and that allows our drivers to do a lot of drop-and-hooks so they don’t have to spend a lot of time waiting on docks.”

The company is also proud of being a vocal part of the community, especially sponsoring the traveling Vietnam Veterans Memorial monument, The Wall That Heals, that was brought to Perry Farm in 2019.

“We were proud to be chosen,” Hoeksra said. “By the time it was all said and done, I was proud of the community and humbled by the experience.”

Lori Teders, director of administration at Hoekstra, said the company is very loyal to its employees.

“They’re always looking out to do what’s best for us, and that flows to all the community efforts that we’ve had, too,” she said. “Steve has a business to run, but he also cares deeply about contributing to the community. Not just a sponsorship here or there, but also hosting these events. The wall was a big deal.

“… It’s things that go outside of the actual work day that I think are special about Hoekstra Transportation.”

Hoekstra said he’s glad the company is a fixture in Eastgate Industrial Park and a good neighbor. The company is entrenched in Kankakee.

“Our business benefited by being here even in the early days with the opportunities that presented themselves with the companies that were in the area,” he said. “Unfortunately, not all of them are still around, but they gave us an opportunity to get started and some of them had a lot of patience with us and I appreciated that.

“From where we were located, I think that’s what helped us grow the business the way we did. We appreciate the community for that, and we also appreciate the employees that are here. I couldn’t imagine having it any better.”

WHAT IT HAULS: Approximately 75% of its business is food-related, from the finished product to packaging.

"Our core values are family, safety, integrity and teamwork."