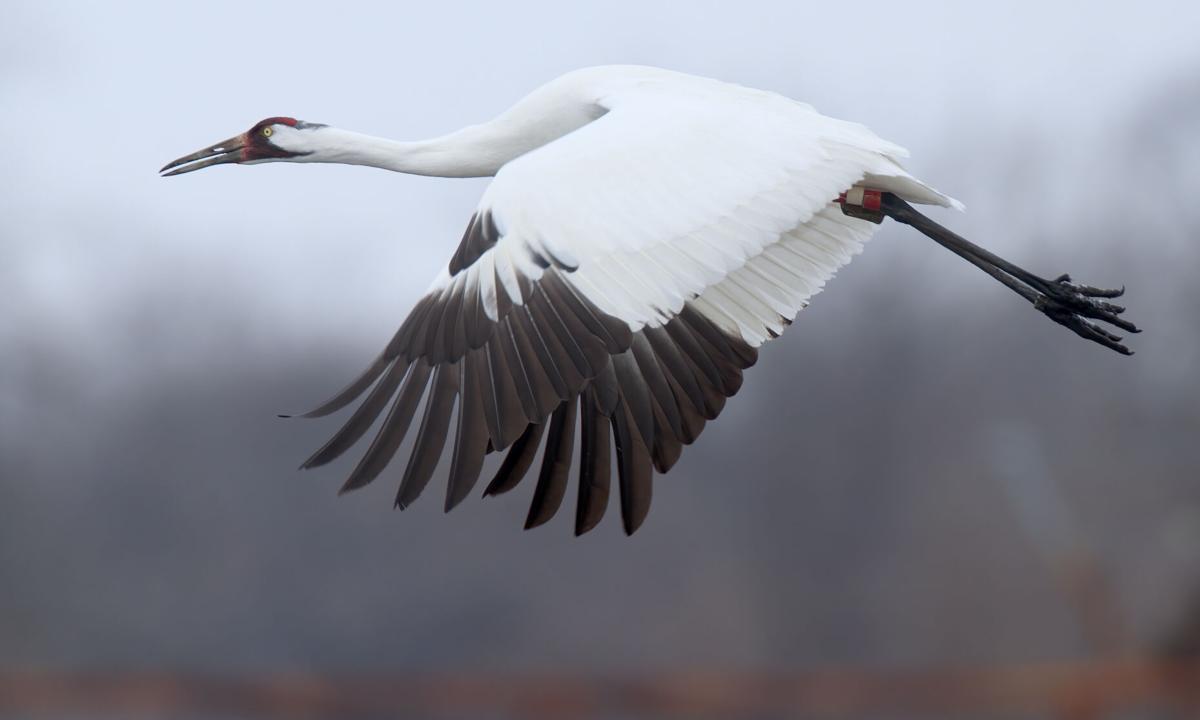 A beautiful rare whooping crane with leg bands visible, flies to another field to feed.

The bright-white whooping crane stands out among the gray sandhill cranes crowded together in the corn stubble.

A beautiful rare whooping crane with leg bands visible, flies to another field to feed.

The bright-white whooping crane stands out among the gray sandhill cranes crowded together in the corn stubble.

Nearing the end of January on a cold and cloudy morning a ghostly white figure stood out among a large number of wintering sandhill cranes.

The cranes were socializing and feeding in some corn stubble a few miles south of the Kankakee River.

Large and small flocks of sandhill cranes were flying across the sky in all directions and many hundreds were crowded together in the surrounding fields. At times, a sandhill crane would seem to challenge the larger white crane that appeared to be minding its own business only to be pushed back by the larger bird and disappear into the crowd of gray.

Soon, another white figure began to come in view as it slowly emerged from the deep drainage ditch that cut through the agricultural fields. A large, beautiful, white crane was feeding with the sandhill cranes that were foraging along the weedy banks and in the shallow icy waters of the ditch.

I always have somewhat of a mixed feeling of joy and sadness to see those glorious, but rare, endangered whooping cranes.

Understanding their struggles and knowing how few there really are can certainly occupy the emotional part of your brain after the experience.

Larger than the sandhill crane, the whooping crane is the tallest bird in North America and also one of the rarest.

Currently, the International Crane Foundation puts the numbers of whooping cranes in the world at 826. The Eastern migratory population nest in Necedah National Wildlife Refuge in Wisconsin, and are the whooping cranes we see here in the Midwest and are estimated at 80 birds as of January 2021. Out of that estimated number in the Eastern population, 17 were wild-hatched, and the rest are captive-reared.

There are 159 whooping cranes in captivity.