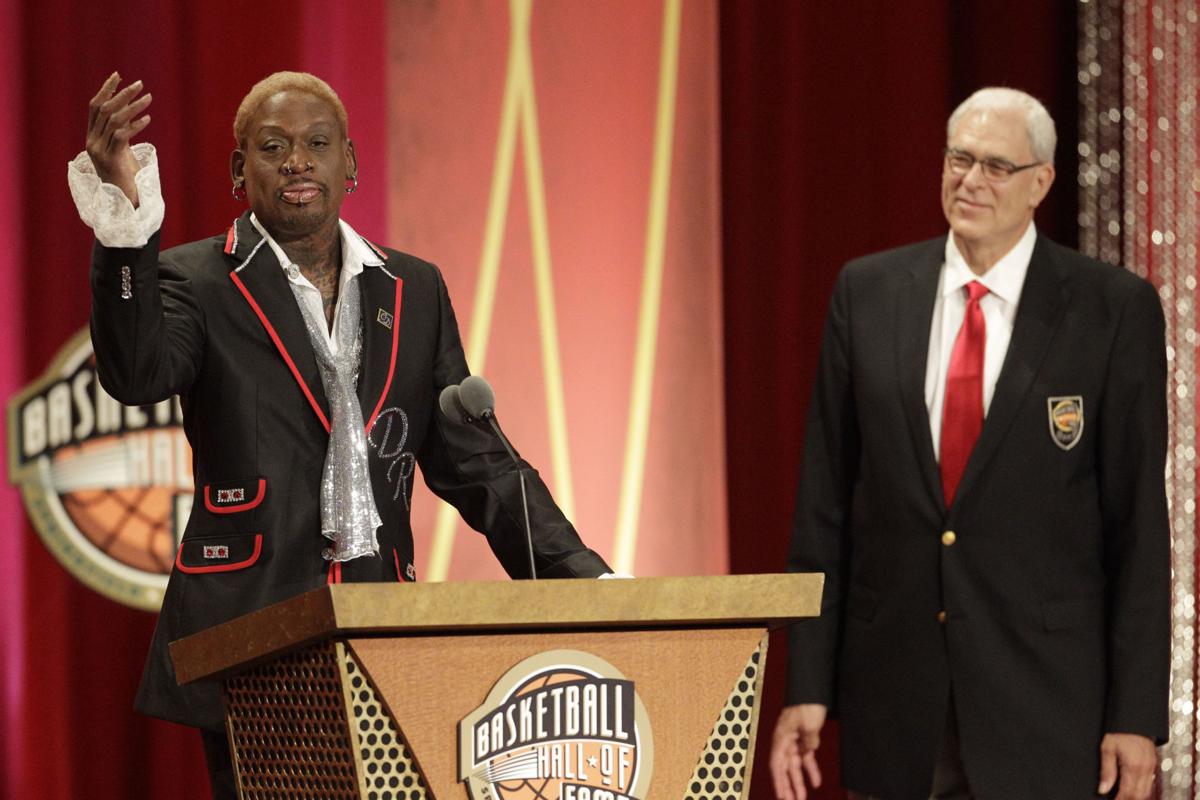 Dennis Rodman, left, is watched by coach Phil Jackson at Rodman's Basketball Hall of Fame enshrinement during a ceremony in Springfield, Mass., on Aug. 12, 2011. Jackson and Chuck Daly, two hall-of-famers themselves, were instrumental in shaping Rodman as a player and person. 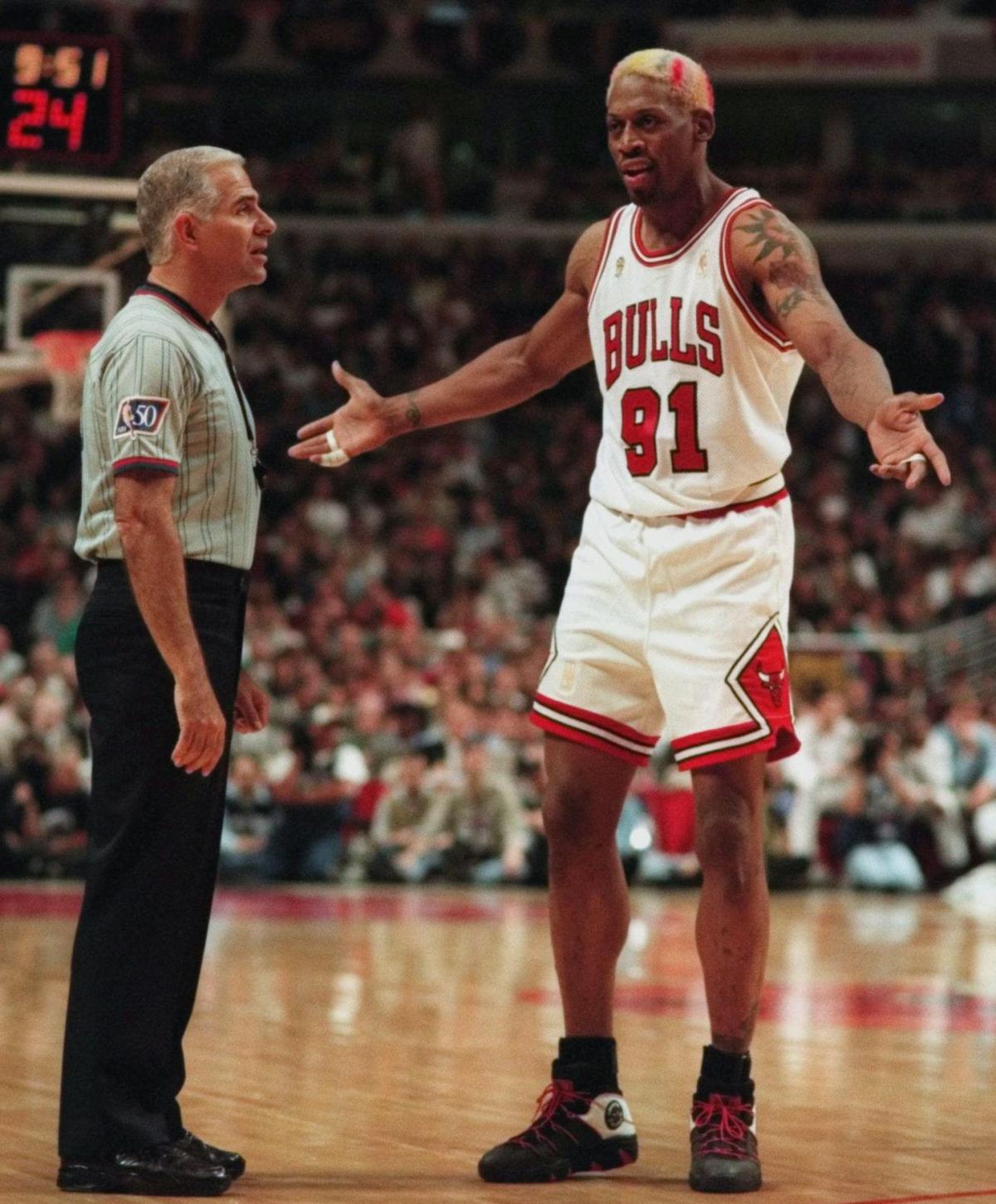 Chicago Bulls forward Dennis Rodman tries to get some sympathy from referee Bennett Salvatorie during the third quarter against the Utah Jazz in Game 2 of the NBA Finals on June 4, 1997, in Chicago.

Dennis Rodman, left, is watched by coach Phil Jackson at Rodman's Basketball Hall of Fame enshrinement during a ceremony in Springfield, Mass., on Aug. 12, 2011. Jackson and Chuck Daly, two hall-of-famers themselves, were instrumental in shaping Rodman as a player and person.

Chicago Bulls forward Dennis Rodman tries to get some sympathy from referee Bennett Salvatorie during the third quarter against the Utah Jazz in Game 2 of the NBA Finals on June 4, 1997, in Chicago.

The third and fourth episodes of “The Last Dance” aired Sunday night and hit streaming services Monday. They weren’t necessarily as revelatory as the series premiere, this weekend’s episodes highlighted the character who is undoubtedly the most interesting out of anyone involved in the Chicago Bulls’ dynastic era — Dennis Rodman.

There were plenty of important people of the era introduced Sunday — whether it was former coach Doug Collins or triangle offense innovator Tex Winter — and equally important moments of Jordan’s story, including the first NBA Finals championship against the Los Angeles Lakers. But Sunday’s two episodes focused on Rodman, whether it was his time with the “Bad Boy” Detroit Pistons or his time in Chicago.

Young or old, we all know Rodman — flamboyant, chaotically energetic, free-spirited and constantly toeing the line of what was and wasn’t acceptable behavior on the hardwood. But what was most interesting to me about Rodman’s profile in “The Last Dance” was the importance his coaches played in his career and how the two who could connect with him properly, Detroit’s Chuck Daly and the Bulls’ Phil Jackson, were the two who got the most out of him.

When Rodman entered the league in 1986, he was inherited by Daly, a legend of Goliath proportions in Motown. Rodman, more affectionately known as “The Worm” because of his slippery play, came from an upbringing that would be best described as difficult. He grew up in a broken home in a rough-and-tumble area of Dallas, living what was a largely loveless childhood.

Daly knew that and gave Rodman the support system he never had or knew he needed. As it was explained in Sunday’s episode, Daly knew you couldn’t “put a saddle on a mustang.” The Worm was definitely a key cog in the Pistons’ physical mentality, but Rodman himself didn’t become much of a bad boy until the end of his time in Detroit.

After a contemplated suicide attempt near the end of his Motor City timeline, Rodman developed the persona we know him best for. That transformation was covered briefly Sunday, but for those who are unfamiliar with the details, I highly recommend the “30 for 30” film “Rodman: For Better or Worse,” which details every single tidbit of one of America’s most polarizing athletes. His character took shape in San Antonio but came to fruition with the Bulls.

The Rodman who played for the Bulls was the same player he was in Detroit — actually even more refined and developed — but the person couldn’t have been more different. He changed his hair more often than his underwear, racked up more rebounds and technical fouls than anyone and, most importantly, he was unquestionably himself.

Sure, the side effects of his free-living mentality were his well-documented wild nights out on the town, his game ejections and other childish antics, but in that, he found the youthful side he never got to explore as a child. He dressed in drag; he pierced whatever he wanted and slept with whoever he felt a connection with. That really made him an early icon for a culture that has become more and more welcome to people who identify differently than the norm, for young people to have the freedom to express themselves.

As he said in the documentary, “I’m doing what I’m doing. It makes me happy.”

And he felt comfortable doing so because of Jackson. One might not think Rodman, who came from such an unstable background, and Jackson, a boy raised in the Dakotas in what can most conservatively be described as a religious-rich household, would relate so well. But they did. Jackson didn’t just allow Rodman to be himself — he encouraged it.

Jackson was a total hippie, openly admitting to his love of hallucinogens and a good time during his prime years. Similar to Rodman, he’s a free spirit who doesn’t care what anyone thinks about him. The same way Daly allowed Rodman to find himself as a player on the court, Jackson allowed him to find himself as a person off of it.

That’s why he empathized with a stressed-out Rodman during that 1997-98 season. After Scottie Pippen’s ankle surgery and subsequent trade demand, Rodman had to shoulder more of the load. Once Pippen came back and Rodman was pushed back down a spot in the pecking order, the sudden change pushed him a little to much mentally.

Jackson empathized with his hall-of-fame forward because he truly understood how he felt. As risky as it was to allow a player known for his wild ways to take a mid-season trip to Las Vegas, that’s exactly what Jackson did.

And it’s safe to say it worked out in the end.