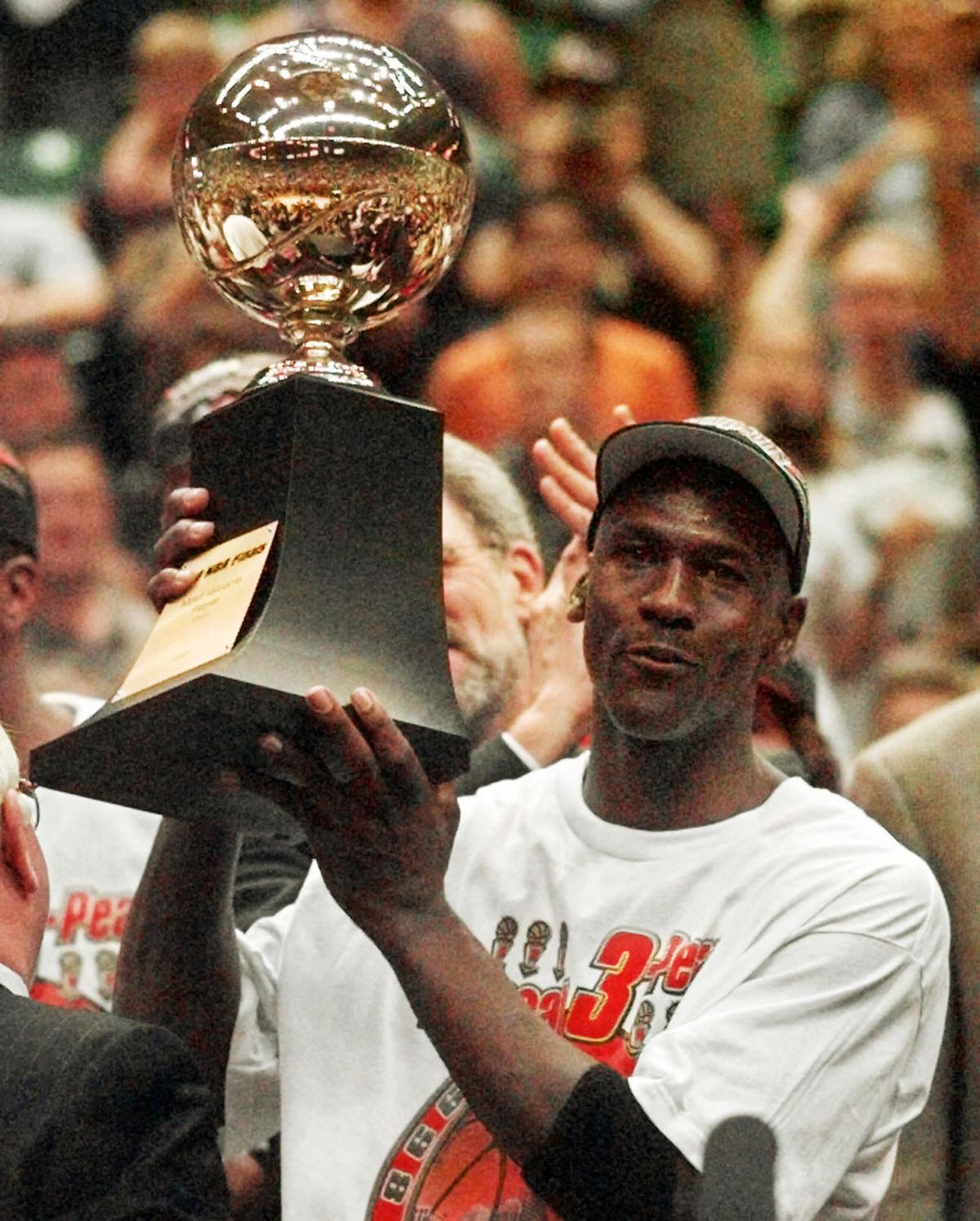 Series MVP Michael Jordan holds the MVP trophy after the Chicago Bulls defeated the Utah Jazz 87-86 in Game 6 of the NBA Finals on June 14, 1998, in Salt Lake City. It was the sixth and final championship Jordan and the Bulls won together. 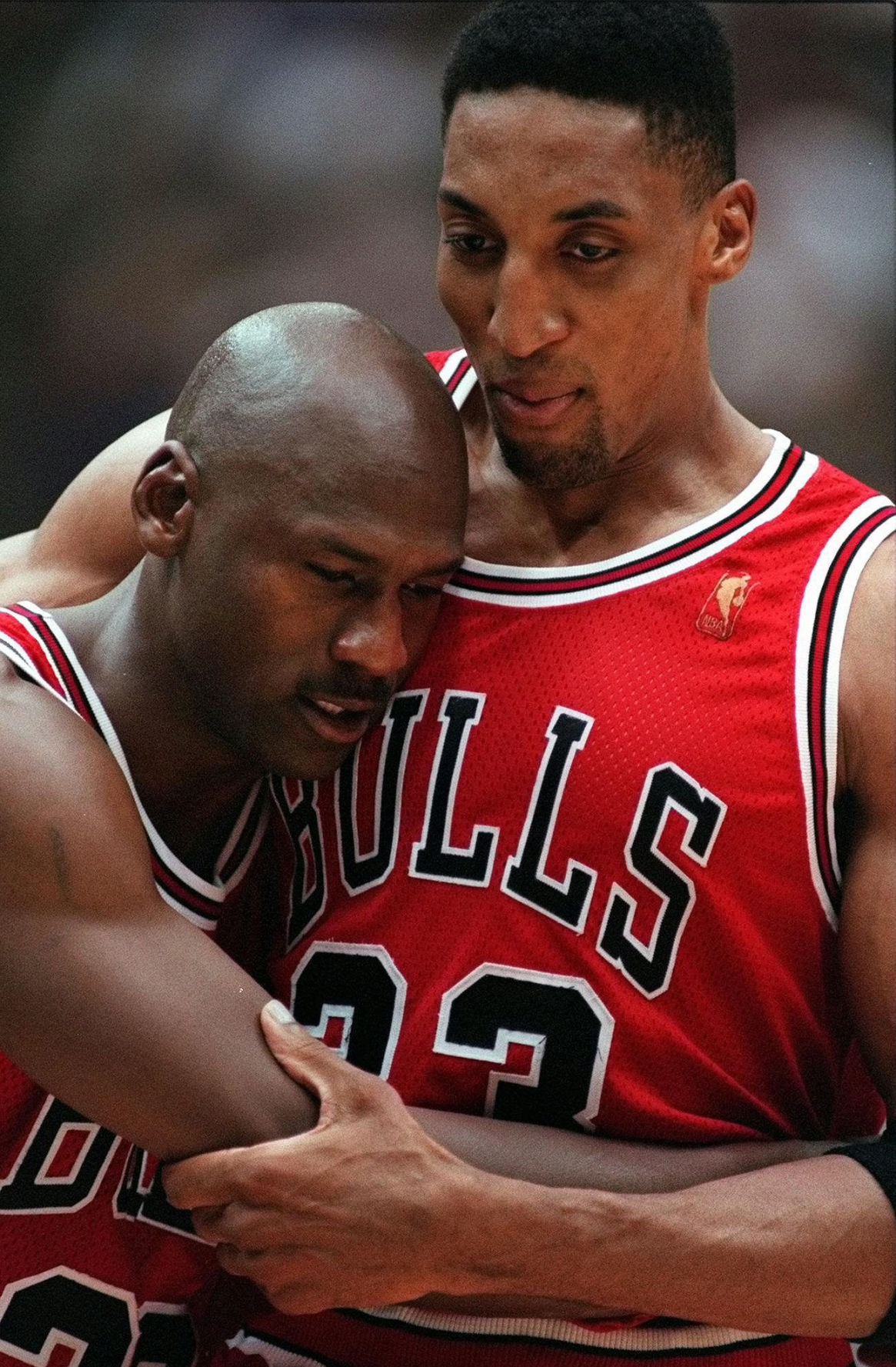 The Chicago Bulls' Scottie Pippen, right, embraces an exhausted Michael Jordan after their 90-88 win in Game 5 of the NBA Finals against the Utah Jazz on June 11, 1997, in Salt Lake City, known infamously as Jordan's "flu game." In the ninth episode of the ESPN documentary series "The Last Dance," it was revealed Jordan had food poisoning, not the flu.

Series MVP Michael Jordan holds the MVP trophy after the Chicago Bulls defeated the Utah Jazz 87-86 in Game 6 of the NBA Finals on June 14, 1998, in Salt Lake City. It was the sixth and final championship Jordan and the Bulls won together.

The Chicago Bulls' Scottie Pippen, right, embraces an exhausted Michael Jordan after their 90-88 win in Game 5 of the NBA Finals against the Utah Jazz on June 11, 1997, in Salt Lake City, known infamously as Jordan's "flu game." In the ninth episode of the ESPN documentary series "The Last Dance," it was revealed Jordan had food poisoning, not the flu.

Until last month, Michael Jordan, for as widely known as he is, was just as good at keeping a wall up as he was at breaking opposing defenses down. Twitter and Instagram didn’t exist, nor did TMZ. Technology and tabloids were really beginning to take a turn, but Jordan didn’t need more than TV and radio.

When he was playing, every TV was flipped to watch, every radio knob dialed to hear the poetic play of Jordan retold, left to their own imaginations.

As he became the first athlete to captivate the world with his basketball skills and shoes in that order of magnitude, despite the cracks and chirps about bad habits that bordered on addiction, despite the very public loss of his father, despite saving the basketball world from cartoon monsters, no one ever got a good look into Jordan, the person.

During the past five weeks, “The Last Dance” gave us, by far, the most introspective look at Jordan. What already was known was discussed with more sincerity and honesty from a wider net of people. What wasn’t known oft-times was revealed, although that was sometimes good and bad.

On a personal level, it’s not dishonest to say he’s a jerk. Steve Kerr’s face will tell you that after it met Michael’s fist. Scott Burrell’s pride and dignity will say the same thing, as would the late, frequently bullied Jerry Krause. His crass leadership abilities, full of challenges and taunts, often teetered on the brink of what is acceptable on a social level.

But by and large, it worked. John Paxson explained it perfectly when he mentioned the words of wisdom he passed down to Kerr in Paxson’s final season.

“Michael had to really trust who you were out there,” Paxson said in the ninth episode. “If he was gonna go into battle with you, he had to know you were in it and weren’t gonna back down.”

The mythical aspect to Jordan is what was cracked most in the documentary. I wrote about the conspiracies that came with Jordan losing his father to a senseless murder and his coinciding retirement — it is true more serious matters such as that should be set straight, but some of the more fun Jordan myths were explored as well — but the revelations didn’t always have the desired effect.

Labradford Smith only ever will be remembered as the guy who said “Nice game, Mike,” after dropping 37 points on Jordan and the Bulls, only to ignite Jordan into a 36-point, first-half frenzy the next night of a back-to-back series between Chicago and Washington.

It was revealed two Sundays ago, by Jordan himself, Smith never said that. Jordan just needed to give himself a little extra fuel. Learning both ruins and enhances the story. On one hand, it’s no OK to make something like that up, but on the other hand, how maniacal of a guy is Jordan to do that?

This past week, Jordan dropped details on the “flu game,” a night in the 1997 NBA Finals in which he went off for 38 points, seven rebounds and five assists in 44 minutes to give the Bulls a 3-2 series lead against the Utah Jazz, a title they clinched one game later.

In the documentary, Jordan revealed food poisoning from a bad pizza the night before was the real cause, not the flu and also not the speculated hangover. The “food poisoning game” just doesn’t have the same ring as the “flu game.” Not to mention, the way the story was told, with five delivery guys delivering one pizza to Michael Jordan, was a little strange. Again, it both negates and enhances the myth at the same time.

But as legend goes, Jordan finally opening up about some of his most pivotal moments only solidified them more. Whether it finally was conquering the Detroit Pistons and getting over the championship hump, his otherworldly performances at Madison Square Garden or his final shot as a Bull, the 1998 NBA Finals series-clincher properly nicknamed “The Shot,” all of Jordan’s legendary moments have passed the test of time.

His commentary on them not only brought back a wave of nostalgia to many older fans but also painted a proper perspective and picture for those too young to recall.

The debate on who the greatest basketball player of all time is always will be worthy of conversation. Like it or not, LeBron James forever will have the right to be compared to Jordan as a player. Many NBA stars have been better people. Other players have yet to see the magic behind some of their stories pealed back, but one thing always will ring true: There is no greater legend in basketball than that of Michael Jordan.

Every week, Mason Schweizer will discuss the most recent happenings in "The Last Dance," a 10-part documentary series airing Sunday nights on ESPN.

Dennis Rodman's coaches allowed him to grow into who he became, both on and off the court.

The Last Reaction: It's gotta be the shoes

Mason Schweizer looks at the importance of the Jordan shoe.

The Last Reaction: How Jordan was forced to grieve in front of the world

Mason Schweizer examines the public grieving Michael Jordan went through during the death of his father and the conspiracies that came with it.