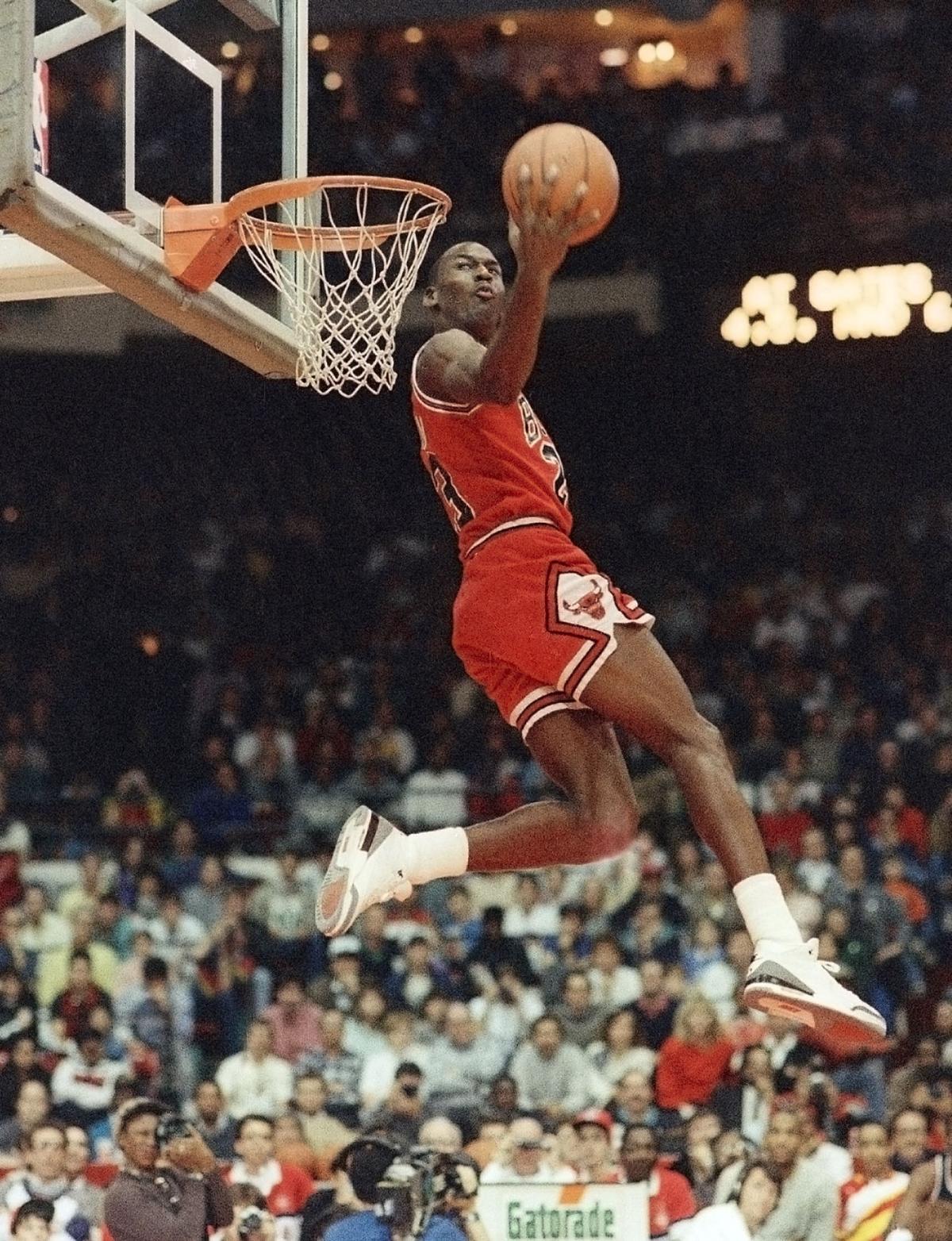 Chicago Bulls' Michael Jordan dunks the ball during the Slam-Dunk championship in Chicago as a part of the NBA All-Star weekend Feb. 6, 1988. Jordan's shoe line with Nike became just as big as Jordan himself, with the Air Jordan IIIs, pictured above, serving as one of the brand's most iconic looks. 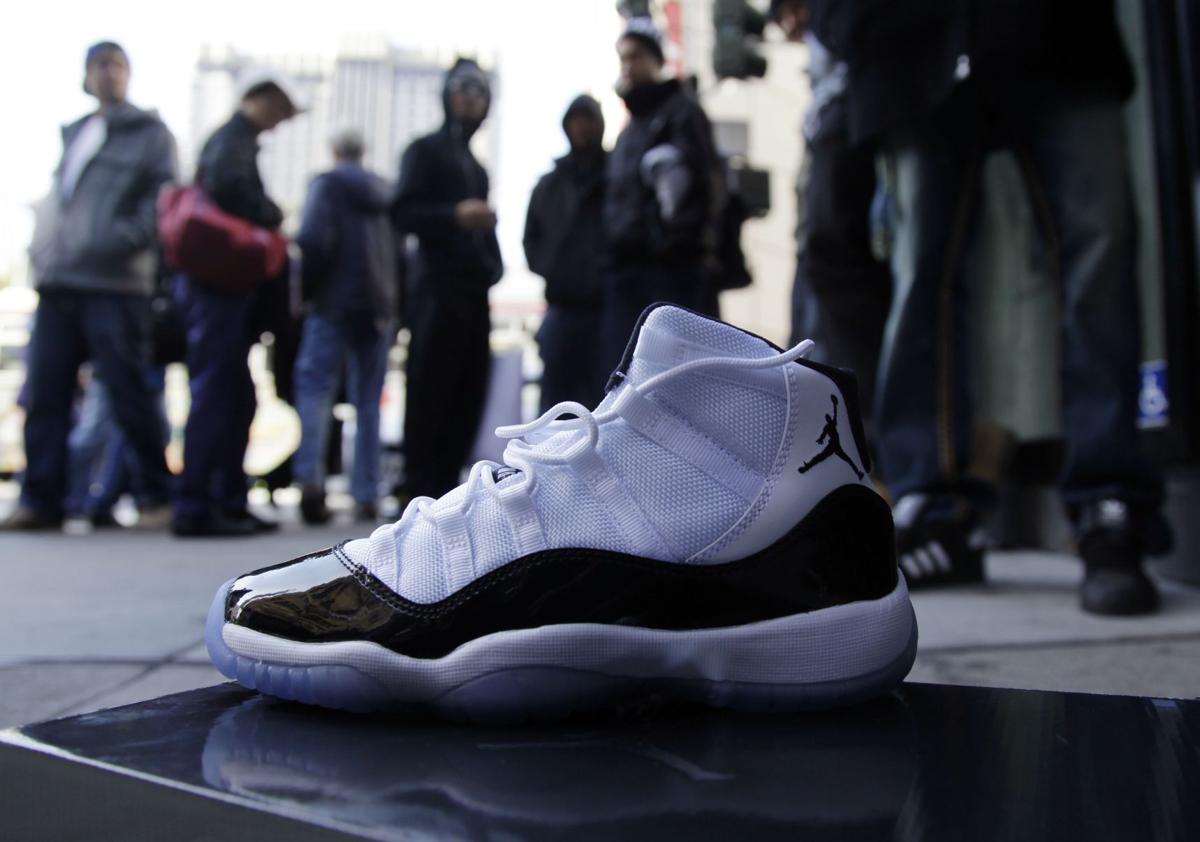 A newly purchased Air Jordan XI sneaker is shown in front of a line of customers at the Nike Store at Union Square on Dec. 23, 2011, in San Francisco. When Jordan sneakers are released, they often bring crowds of hundreds of people at thousands of locations around the world, as well as the internet.

Chicago Bulls' Michael Jordan dunks the ball during the Slam-Dunk championship in Chicago as a part of the NBA All-Star weekend Feb. 6, 1988. Jordan's shoe line with Nike became just as big as Jordan himself, with the Air Jordan IIIs, pictured above, serving as one of the brand's most iconic looks.

A newly purchased Air Jordan XI sneaker is shown in front of a line of customers at the Nike Store at Union Square on Dec. 23, 2011, in San Francisco. When Jordan sneakers are released, they often bring crowds of hundreds of people at thousands of locations around the world, as well as the internet.

This week’s installment of ESPN’s “The Last Dance” gave more options for column ideas than the first two weeks combined. The relationship Michael Jordan and Kobe Byrant built, the 1992 “Dream Team” and His Airness’ risky relationship with gambling would have made for great topics to cover this week.

But to me, nothing is more important to Jordan and his legacy than his shoes.

When a young Jordan broke into the league and became a free agent on the sneaker market in 1984, Converse was all the craze. Adidas was primarily a tennis shoe in the strictest sense of the word, and Nike was but a small, track and field brand.

As we all know by now, the Jordan and Nike marriage was mutually beneficial beyond what anyone could have imagined. The fact that stuck out to me most from the documentary this week was when Jordan’s agent, David Falk, said Nike raked in $126 million in the first year alone, just a tad higher than their initial goal of $3 million.

Today, the Converse brand now is owned by Nike. Without Jordan, that never would have happened. More than 30 years after the inception of the sneaker line, millions of Jordans are sold each year.

A vast majority of those the retro versions of the shoes Jordan made his most memorable moments in, including defeating the Monstars in “Space Jam,” birthing the iconic Space Jam XIs, arguably the most famous in a long line of coveted kicks.

The only times malls are flooded with lines of shoppers hours before opening are on Black Friday and Jordan releases. Releases also crash internet servers, as sneakerheads, casual fans and bots all scramble to snatch up pairs the second they’re released online. And if you aren’t lucky enough to win the Jordan Lottery, your next option is to buy them on the secondhand market, with some of the more reputable editions garnering four figures.

The people dropping racks on shoes that feature the jumpman logo are as diverse as the colorways of the sneakers themselves. The most infamous quote attributed to Jordan is also one of the truest — “Republicans buy shoes, too.” The prices continue to go up, as does the supply. But as more and more young people become acclimated with Jordan and the importance of his brand, the demand rises quicker than the price and supply.

Of course, Jordan’s greatness and the image he quickly built for himself are why the brand took off and never stopped, but it’s not just him. Spike Lee’s infamous Mars Blackmon commercials with Jordan are the most well-known commercials in consumerism history. The prominence of the brand in some of Lee’s biggest movies, such as “He Got Game” and “Do The Right Thing,” only added to the legend.

The debate only grows every season on who exactly is the best basketball player of all time, usually between Jordan and LeBron James. There are certainly arguments to be made for both players. I always have the internal battle of being a Bulls and Jordan fan and also realizing each generation of players is more talented than the players they replace.

But one G.O.A.T. status can’t be argued. The Jordan brand is, and always will be, the most sought-after and most important sneaker. He’s the reason basketball shoes became even more fashionable off the court than on it. He’s the reason kids and adults alike swoon after a few feet of leather. He’s the reason sports business is its own subsection of news.

Jordan won six NBA championships, changed the game of basketball and became the first athlete to turn his name into an icon. And it’s all because of the shoes.

What are your favorite Jordan brand shoes? Let Mason know on Twitter @MSchweizerTDJS.