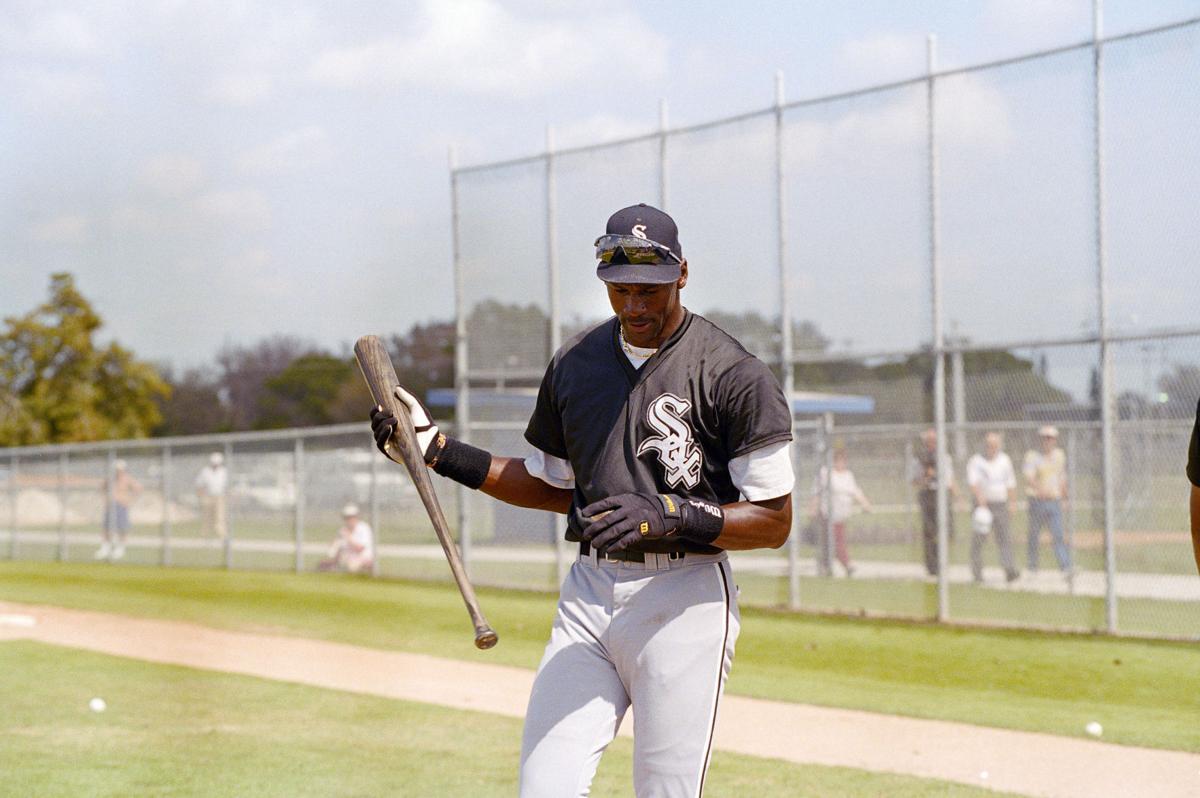 Chicago White Sox minor-leaguer Michael Jordan looks at his hand as he finishes batting practice Feb. 27, 1995, in Sarasota, Fla. Jordan retired from basketball to pursue a career in baseball after the tragic murder of his father in 1993. 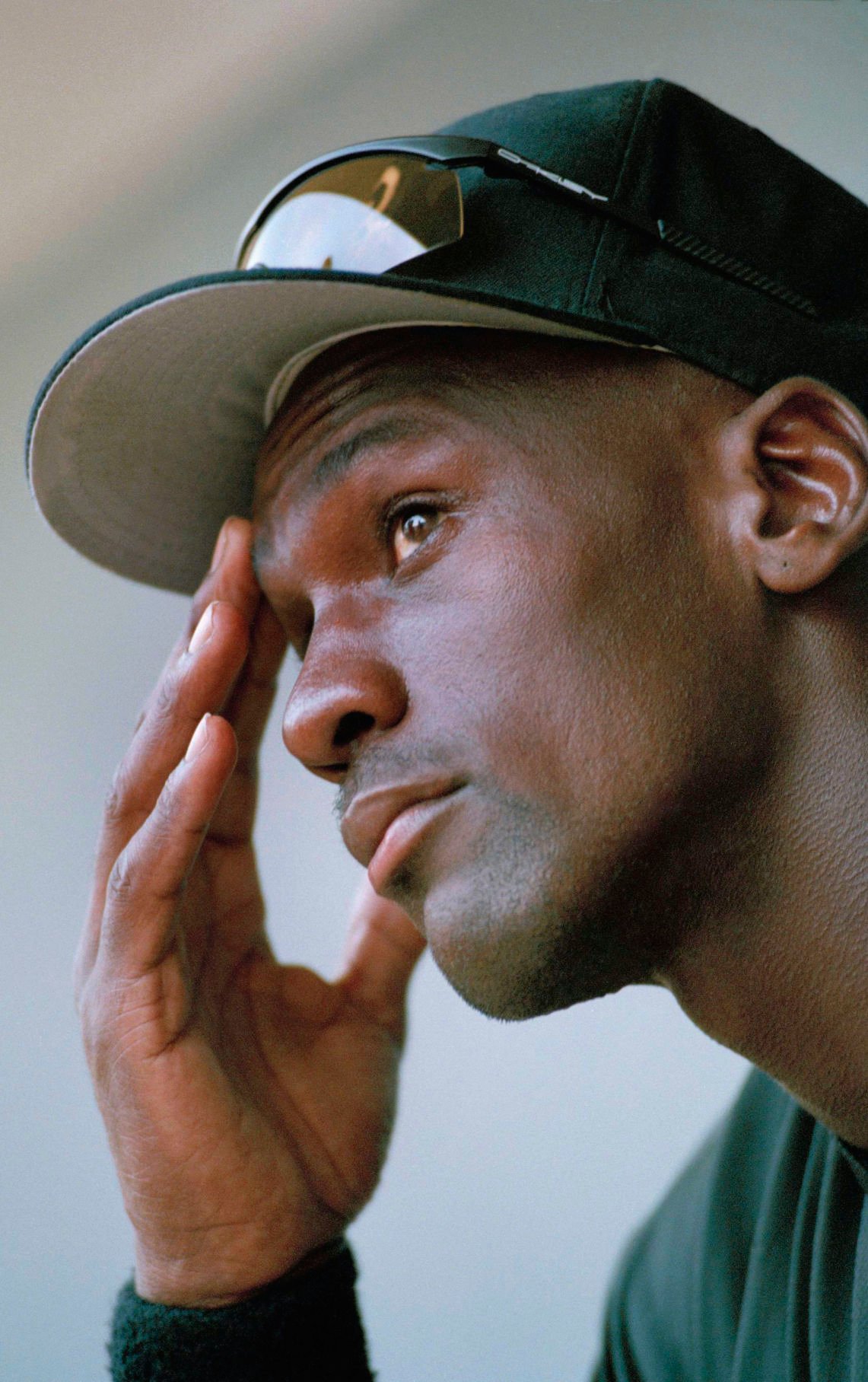 Birmingham Barons left fielder Michael Jordan talks with reporters Aug. 10, 1994, at the Hoover Metropolitan Stadium in Birmingham, Ala., before the Barons' game against the Knoxville Smokies. After his father was tragically murdered, Jordan retired from basketball in 1993 to pursue a career in baseball.

Chicago White Sox minor-leaguer Michael Jordan looks at his hand as he finishes batting practice Feb. 27, 1995, in Sarasota, Fla. Jordan retired from basketball to pursue a career in baseball after the tragic murder of his father in 1993.

Birmingham Barons left fielder Michael Jordan talks with reporters Aug. 10, 1994, at the Hoover Metropolitan Stadium in Birmingham, Ala., before the Barons' game against the Knoxville Smokies. After his father was tragically murdered, Jordan retired from basketball in 1993 to pursue a career in baseball.

Before the public release of “The Last Dance,” many media members who already had seen the first eight installments of the 10-part series hailed the seventh episode, which aired Sunday, as the best of the bunch.

It definitely contained the least amount of Jordan basketball highlights, but that’s what made it so great. We got to see Michael talk about some of the most important moments of his life, after who knows how many drinks, in the most candid way we ever have, as well as seeing him on the baseball field.

One of the most popular tropes from sports fans for generations has been that professional athletes are rewarded with fame, money, glitz and glamour, and in return, they aren’t allowed to be normal people. But no one ever saw the level of fame and popularity Jordan did as the Bulls wrapped up their third straight NBA Finals championship in 1993.

Then, his biggest nightmare became reality. A little more than a month after the Bulls were crowned with their third title, Jordan’s father went missing. A few weeks later, the remains of his murdered body were found.

The pain that comes with losing a parent is truly something that’s indescribable. For those who have had to bury their mother or father, think about what the grieving process was like. We all grieve differently, but I remember just wanting to isolate, save for my family and closest friends, when I lost my father. I certainly didn’t want the entire world watching my every moment, waiting for my every thought, while going through the most difficult life change imaginable.

By now, the details of what Jordan went through with the loss of his dad are well-documented. The two were inseparable, a textbook definition of a father and son bond. Not only did Jordan have to deal with losing his father in such a public matter, but the rumors then came that his father was somehow murdered in connection with Michael’s affection for gambling.

I must admit, in my early college days, I was all about the conspiracy life, and my favorite conspiracy was Jordan didn’t retire from basketball shortly after his father was murdered, but rather he was suspended from the NBA, and his desire to play baseball was the perfect way to cover it.

It made all the sense in the world to a young mind eager to be filled with whatever controversial or rebellious information was there to consume, and the Jordan conspiracy was a perfect storm. His gambling was well known, as was the brutality and randomness of his father’s murder. Sprinkle in the fact Bulls owner Jerry Reinsdorf also owns the White Sox, the organization Jordan added cleats to his signature shoes for, and you’ve got the conspiracy of all conspiracies.

Then, I grew up and realized things such as credible sources exist, and if something of that magnitude had happened, we would know about it by now. There are plenty of people out there right now who could use the advice that just because you see something on YouTube or Facebook doesn’t mean it’s true.

As fun as speculation can be, it’s hurtful to those involved, especially in regard to a death, and some conspiracies even can be dangerous. Jordan needed a break from basketball and everything that came with it before losing his dad. That just made the decision a no-brainer.

In the documentary Sunday, it was revealed the last conversation Jordan and his father had was about him retiring to try his hand at baseball. In basketball’s place, the competitive void in his life was filled with bumpy bus rides and room-temperature postgame buffets.

It was exceedingly more difficult than basketball was, but it was fun for Michael. So was filming “Space Jam.” He needed to escape for a bit, and that’s exactly what he did.