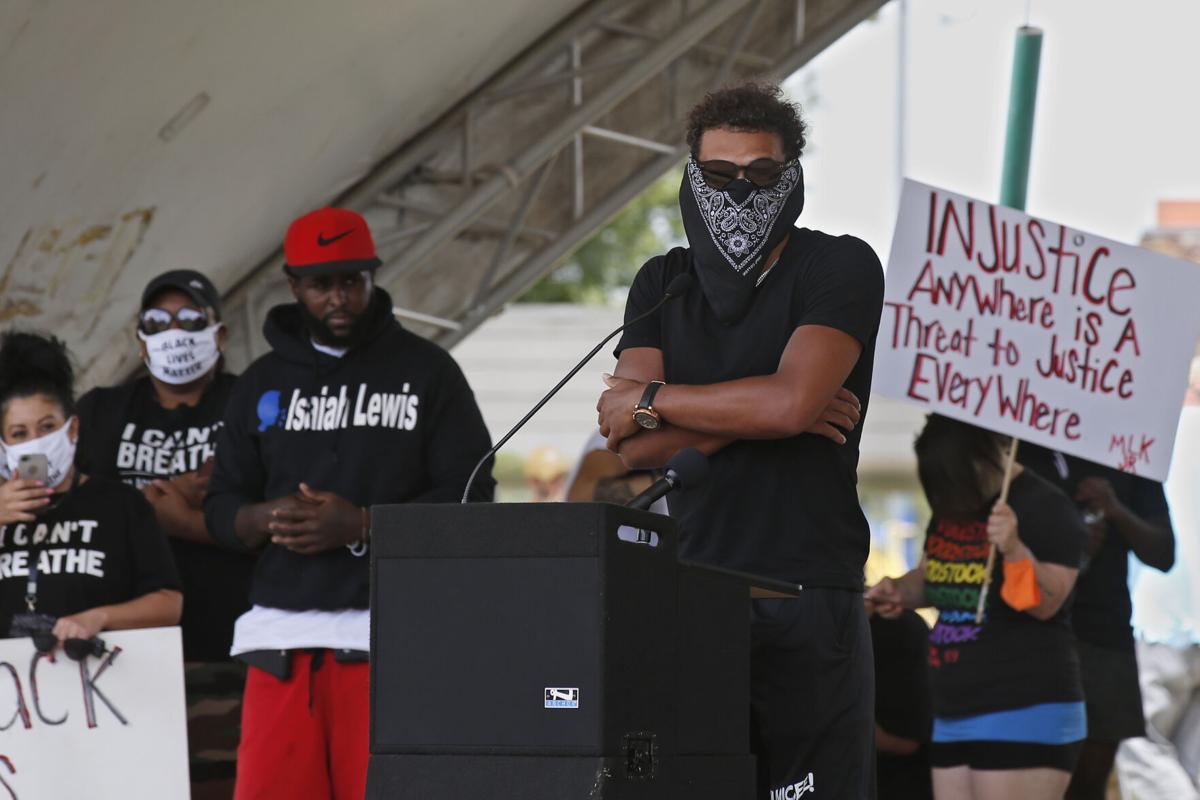 Atlanta Hawks guard Trae Young, center, speaks during a peaceful rally Monday in his hometown of Norman, Okla., calling attention to the killing of George Floyd by Minneapolis police May 25. 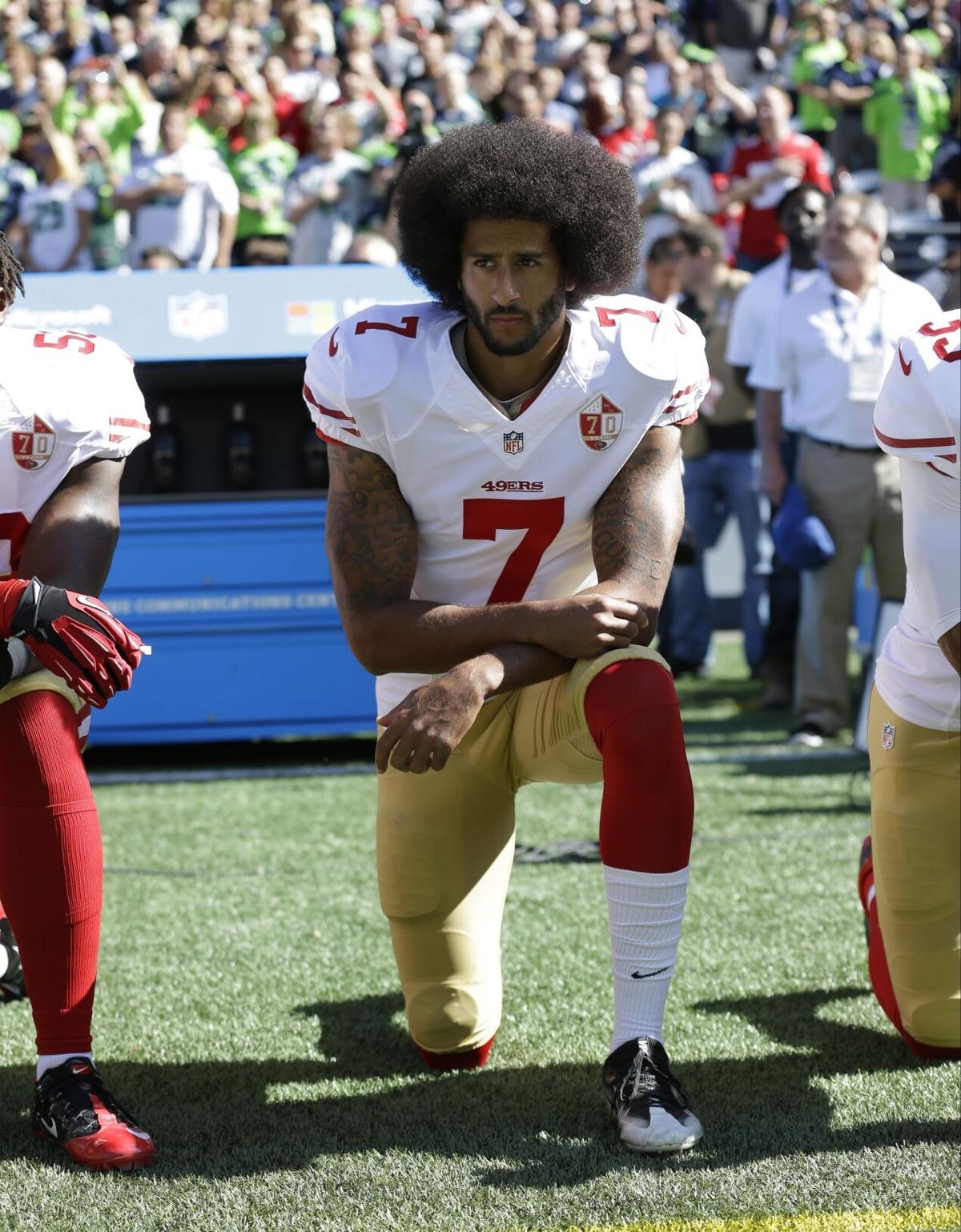 San Francisco 49ers' Colin Kaepernick kneels during the national anthem Sept. 25, 2016, before an NFL football game against the Seattle Seahawks in Seattle.

Atlanta Hawks guard Trae Young, center, speaks during a peaceful rally Monday in his hometown of Norman, Okla., calling attention to the killing of George Floyd by Minneapolis police May 25.

San Francisco 49ers' Colin Kaepernick kneels during the national anthem Sept. 25, 2016, before an NFL football game against the Seattle Seahawks in Seattle.

When sports began shutting down at the beginning of America’s battle with the COVID-19 pandemic, I wrote about how sports provide an escape for society during tough times, but the silver lining in them being absent now is we as a nation are forced to face today’s events more head-on.

And as times have gotten even tougher with the recent wave of unjust treatment of African Americans and the resulting protests, leagues, teams and players have drawn attention away from their return-to-play discussions to speak on the latest happenings.

Before I dig too deep on the grander scale of professional sports, I want readers, some of whom heavily disagreed with me the last time I wrote on this subject a few years ago, to understand why the issue is finding its way back into the sports section.

Put quite simply, it’s because it’s important. I started and stopped a sports-based column on the matter earlier this week before deciding to follow through. I might not have the biggest platform in the world, but the truth is I have one and feel the need to use it to fight the good fight. I’m a white guy who never truly will understand these issues, and I know I won’t ever be able to fully comprehend them. But that’s not an excuse to not be on the side of equality and justice.

There are several black student-athletes in the area, just like all other races. I’ve built personal relationships with many players, coaches, fans and school employees who I know are treated and looked at differently than I am, for nothing else than the pigment of their skin. And those people, the kids especially, need to know they’re supported. They need to know they matter.

Black Lives Matter doesn’t mean they matter any more than anyone else, simply that they matter. In a country built on the backs of black slaves, in a country that practiced segregation for a majority of its existence, in a country where people of their race are killed for simply existing, African Americans are often not made to feel that way. That should not be the opinion-splitting topic it’s become.

And that’s why it’s been vital to hear messages of support from some of the biggest stars in sports, comprised of all sorts of races, ethnicities and backgrounds. From black superstars such as LeBron James to marginal white talents such as Chicago Blackhawks forward Zach Smith, the sports world has seen solid unity, particularly on an individual level.

On an organizational level, most notable messages came from the National Football League, which has seen the most public scrutiny on its handling of this issue since Colin Kaepernick led the charge to kneel during the national anthem at games in 2016. A once-promising star who was seconds away from a Super Bowl title in his first season as a starter, he now is most known for his symbolic protest, which also has been his last action on an NFL field.

That’s why it was painfully ironic the San Francisco 49ers, the team Kaepernick played for before his release and subsequent blackballing, released a statement as part of #BlackoutTuesday, a social media hashtag created to draw attention to the Black Lives Matter movement and black businesses instead of any kinds of self-promotion.

But that didn’t stop the brands from branding, the Niners perhaps the most egregious of all. Their black box post, which comprised a large majority of the movement Tuesday, drew ire from all corners of society. The very same team that let go of a player for peacefully protesting black injustice is now taking a stance on the same side of the person they dropped like that?

NFL commissioner Roger Goodell released a statement last week on the matter, mentioning the league realizes there is an “urgent need for action” and other buzzword phrases. Again, this comes from a league that blackballed a black quarterback for peacefully protesting, something those who oppose recognizing today’s racial inequalities claim they wish today’s protests would be. (The ensuing riots and their causes are an entirely different discussion.)

Is it possible the league and the people who form it learned in recent years the handling of kneeling was wrong, and to start taking the matter with an intense increase of priority? Sure, and I hope that’s the case.

Before the deaths of Breonna Taylor and George Floyd, the NFL’s proposed, and quickly retracted, idea to use draft capital as incentive to hire more minority coaches was one of sports’ biggest debate points since the coronavirus hit the nation. While it was painfully offensive to compare the value of a minority coaching candidate to draft position, it also was evident the league was at least willing to listen when they quickly walked the idea back. Now, the league has to find ways to follow through with being the change it claims to aspire to be.

But New Orleans Saints quarterback Drew Brees showed there is still a disconnect. He said in an interview with Yahoo he “will never agree with anybody disrespecting the flag of the United States of America,” before explaining that the flag and anthem reminds him of his grandfathers who fought in World War II.

Drew, do you know how many black men fought beside your grandfathers and returned to a country where they lacked the same basic liberties your grandfathers did, those same liberties that hardly are afforded to all minorities today? The entire point of protesting is to draw attention to a cause and ask for help, ask for change.

When people such as Brees continue to be hung up on the kneeling issue, they show they aren’t lending an ear to what the protesting is about, whether it be the kneeling, civil rights protests of the 1960s or the protests that have spawned across the world today. To be this blind, willfully or not, is problematic. The same goes for Denver Broncos head coach Vic Fangio, who drew criticism this week for saying he doesn’t see racism in the NFL.

African Americans and all other minority groups want to be heard. They want white people to realize the privilege we have. That privilege might not be tangibly felt or noticed, but it’s there, and we can tell it’s there by not even noticing we have it. That’s how ingrained it is.

The teams and leagues that collect billions of dollars from these people need to realize that. The fact there are no black owners in the NFL is proof it exists, right in front of the people who hire PR firms to tweet out generically branded messages. Players such as Brees need to acknowledge it as well and understand they can have a positive role in making the change that is being begged for in our streets.

Black lives, particularly the young black men and women who see prejudice the most, need to know they matter. And the athletes who fill the posters on their walls and backgrounds on their phones can be the vectors to help them. They just have to be willing to listen.