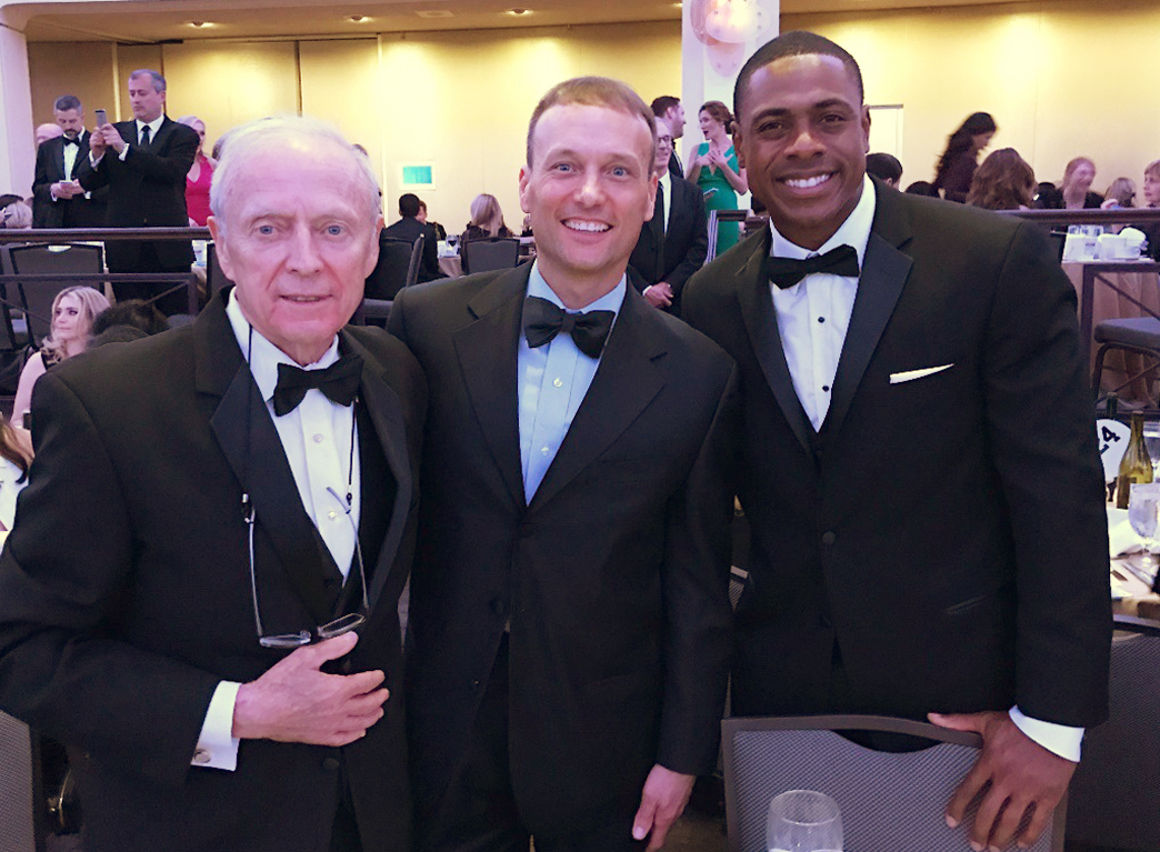 John Andrzejewsk, left, his son Adam, and New York Mets outfielder Curtis Granderson gather together at the White House Correspondents' Dinner in Washington last April. While the event drew fewer celebrities this year, Granderson did attend. He is a Blue Island native, the son of two educators and a noted children's advocate. 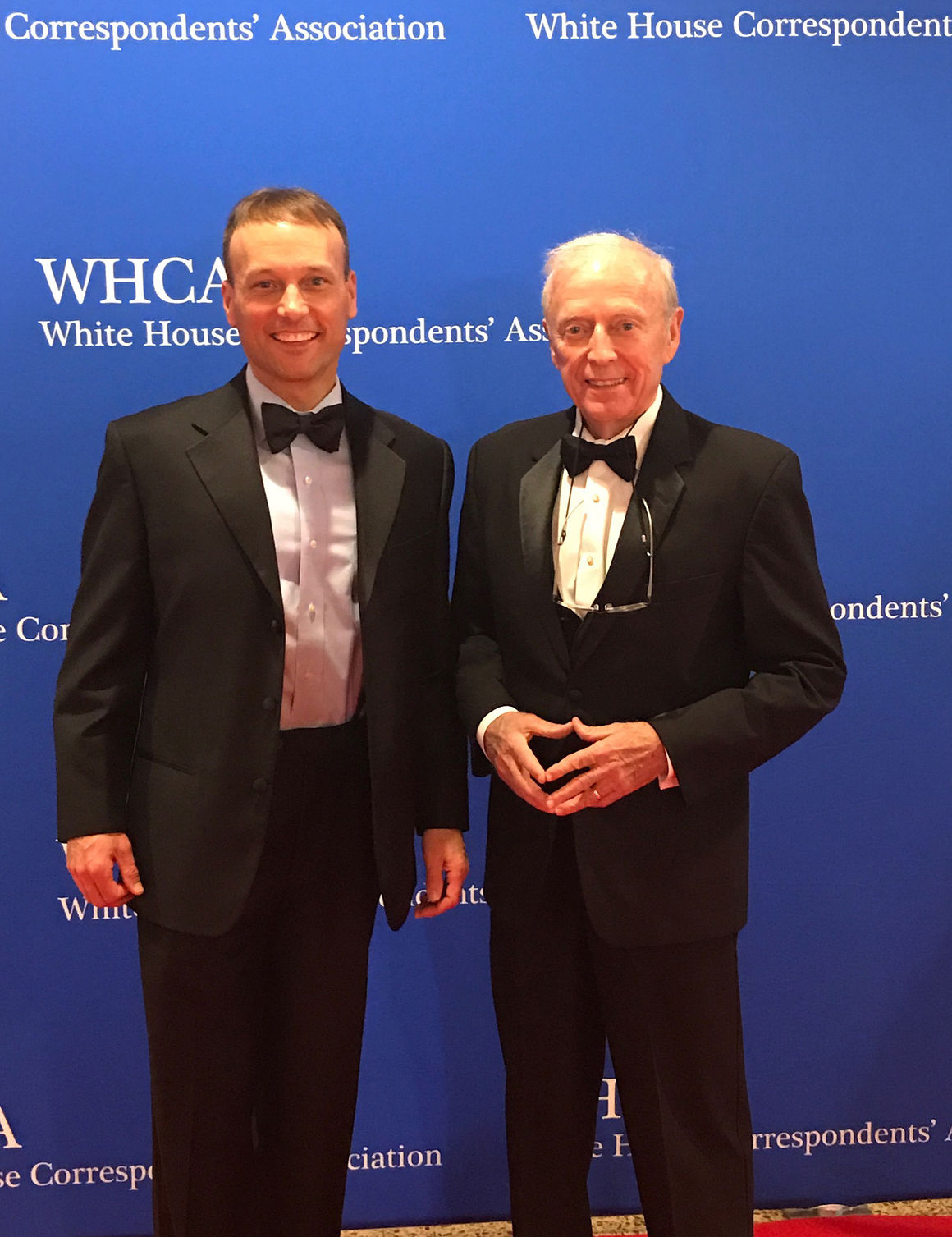 Adam Andrzejewski, left, a Herscher native and current Hinsdale resident, stands with his father, John, at the annual dinner of the White House Correspondents' Association held last April in Washington. John and his wife, Janet, raised seven children and now have 27 grandchildren.

John Andrzejewsk, left, his son Adam, and New York Mets outfielder Curtis Granderson gather together at the White House Correspondents' Dinner in Washington last April. While the event drew fewer celebrities this year, Granderson did attend. He is a Blue Island native, the son of two educators and a noted children's advocate.

Adam Andrzejewski, left, a Herscher native and current Hinsdale resident, stands with his father, John, at the annual dinner of the White House Correspondents' Association held last April in Washington. John and his wife, Janet, raised seven children and now have 27 grandchildren.

Adam Andrzejewski has a deep interest in the inner workings of government, and he knows exactly how the roots for this passion were planted.

"All politics is local, and it starts with how we treat our neighbors,'' Andrzejewski said. "My father [John Andrzejewski] treats people well. My father instilled in me the importance of moral rigor, character and toughness, while still having the capacity to extend unconditional love.''

Adam, now 47, learned those values while growing up in Herscher as the oldest of seven children of John and Janet Andrzejewski. They came in handy later, as after he graduated from Herscher High School and Northern Illinois University, he went on to co-found an independent publishing business before making an unsuccessful run for governor in the 2010 Illinois Republican Primary. After the campaign, he founded OpenTheBooks, a nonprofit organization that is devoted to transparency in government.

His father, now 79, has also led a life of distinction. He taught civics and history at Limestone Grade School for 36 years, and began a second profession as a Realtor during that time to further support his large family. He made two unsuccessful runs for state representative against George Ryan in 1976 and 1978. Adam was only in second and fourth grade during those years, but recalls the campaigns as one of his most formative experiences.

Father and son had another memorable experience on April 29, when they attended the annual White House Correspondents' Dinner in Washington. While the nation's capital seems to be surrounded by negativity these days, that word would not describe either man's take on the event.

"It was a lot of fun,'' John said. "I met a lot of people who came together. The more people join together and do the right thing, the better off we are. I feel confident about the country's future.''

Much of Adam's pleasure was linked to his father's presence.

"Dad has a tremendous capacity to appreciate people,'' Adam said. "Whether it was in his classroom, around our family's dinner table or on the plane with me to Washington, D.C., my father really cares for people and their circumstances. He learns from their experiences.''

One person who did not benefit from the correspondents' dinner is President Donald Trump. who broke a long-standing tradition by not attending the event. His absence was noticeable, and something father and son wish would have been avoided.

Adam said, "There's a time to laugh and a time to cry. Sometimes, politicians get the time confused. Having the president at the correspondents' dinner would have been a good time to share a laugh.''

But don't assume their disappointment with Trump means they are anti-Republican. John, once a John F. Kennedy-style Democrat, became a Ronald-Reagan style Republican when Reagan ran for president in 1980. Adam admits he votes in Republican primaries, but in his role as OpenTheBooks founder and CEO, he shows no bias, unless it is toward the common people.

"My role today is to hold the political class accountable for tax and spend decisions,'' Adam said. "Our team is ferociously independent and cannot be labeled. We have an iron wall between our oversight work and our politics.''

The most recent example of valuable work done by OpenTheBooks came last year, when Adam and his group exposed information which detailed how the U.S. Department of Veterans Affairs had purchased $20 million in high-end luxury art during a period when up to 1,000 sick veterans died while waiting for a delayed doctor's appointment. The revelation led to a push for reforms within the VA.

This type of work puts Adam in a role similar to what the nation's press corps does, and he rubbed elbows with some of the industry's leading figures at the correspondents' dinner. The press, particularly major media outlets, have come under harsh criticism recently, but despite its flaws, both Adam and his father believe the "fourth estate'' continues to play a crucial role in society.

"The media today is more important than ever, especially the boots-on-the-ground local reporting like the kind at the Daily Journal,'' Adam said. "Because of today's speed-to-market pace, the national media doesn't always get it right and there's a trust gap. Starting with the 2016 election cycle, institutional bias and journalist emotion replaced straightforward reporting of the news. This harmed the industry's credibility.''

Adam's views on the subject were sharpened more by the keynote speech given at the correspondents' dinner. It was delivered by Bob Woodward and Carl Bernstein, the reporters who broke the Watergate scandal while working for the Washington Post in the 1970s.

"The keynote speech was an almost workmanlike defense of First Amendment freedoms,'' he said. "All of us – citizens, watchdogs, politicians and journalists – have a stake in maintaining free and unfettered access into the highest levels of government.''