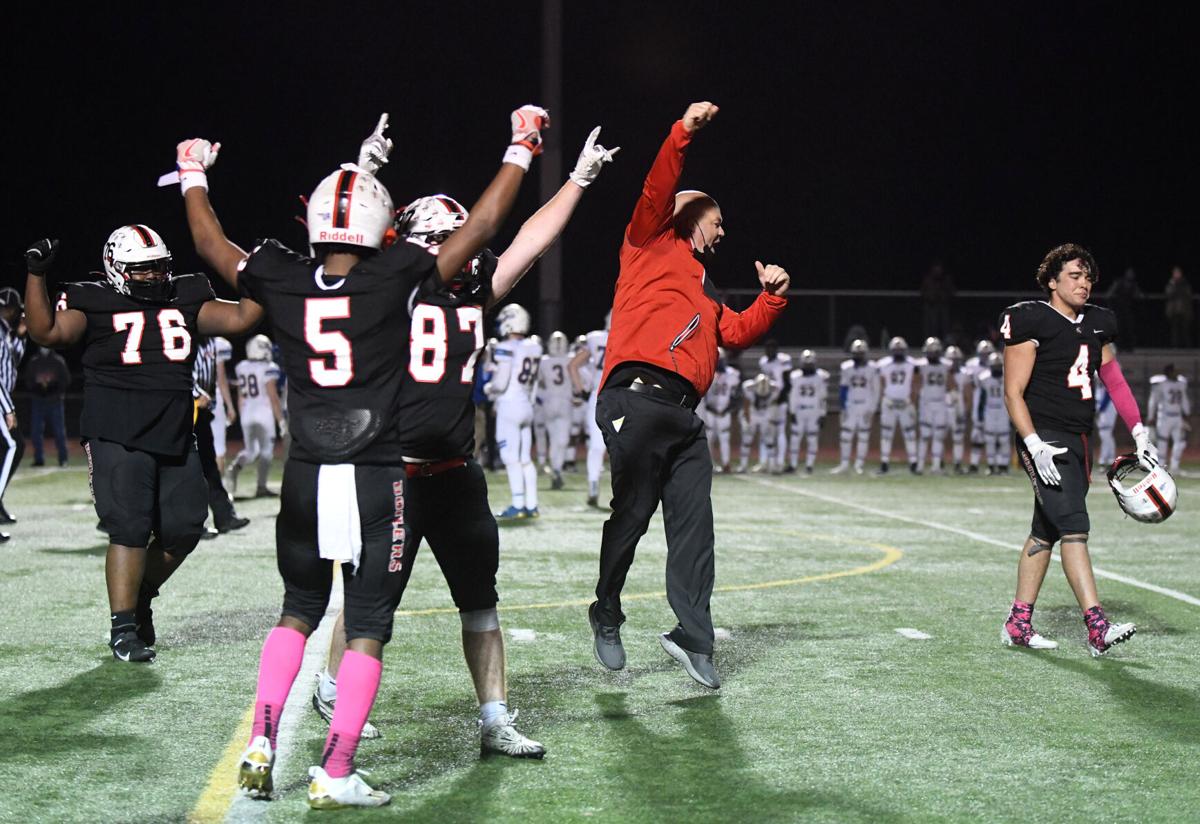 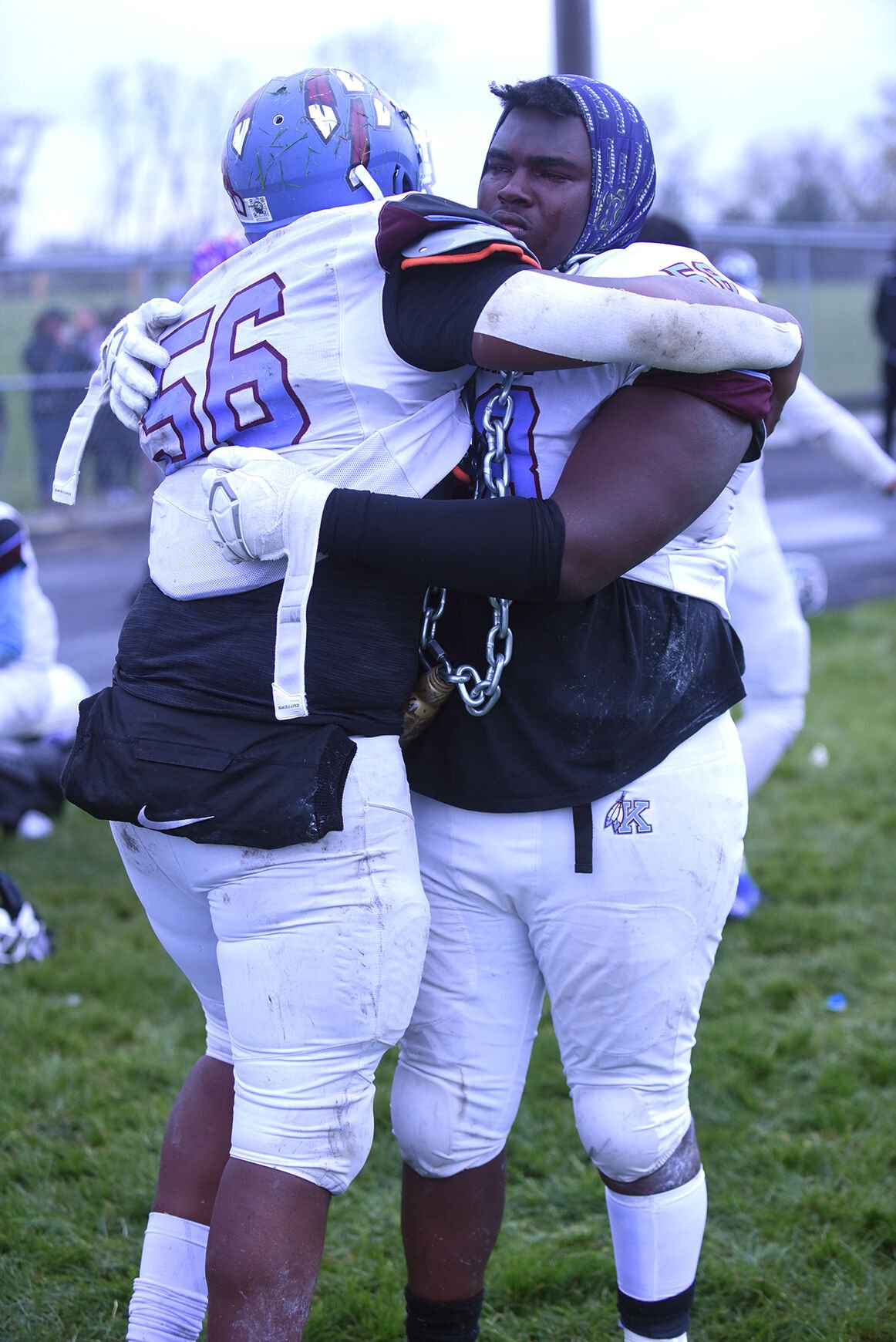 Kankakee senior Dion Dansby, right, is embraced by junior teammate Joseph Shannon after the Kays’ 37-20 loss at Crete-Monee in the final game of the season.

Kankakee senior Dion Dansby, right, is embraced by junior teammate Joseph Shannon after the Kays’ 37-20 loss at Crete-Monee in the final game of the season.

When the IHSA announced winter and spring sports would be played this school year without a postseason, some fans were skeptical on the meaning of the season without a state tournament. “What’s the point of the season if there’s no champion?” or a similar sentiment was commonplace the past few months.

Try telling that to Bradley-Bourbonnais’ kids after successfully fending off Sandburg’s 2-point conversion attempt in overtime to end its season with a 40-39 win on its home field. Or to Jay Lemenager and Caden Perry when they connected for the go-ahead touchdown in Central’s 42-35 win against Watseka. Or to Matt Sanchez and his fellow seniors when he scored a game-winner of his own two weeks ago against Coal City in the final week of Illinois Central Eight play.

Homecoming wasn’t a thing last fall. In Gilman, it was made up for with a homecoming and corresponding football game last week. Sure, the lack of playoff games this year isn’t the most ideal scenario, but I dare anyone to look in the eyes of a kid who got to play a sport this year they didn’t think they would four months ago and tell them there wasn’t a point to their season.

I sat down with half a dozen seniors on the Central football team last week, including the battery that connected for the game-winner Friday. The group was in consensus that while they love winning football games (Friday’s win gave the core senior group an undefeated football career in the Sangamon Valley Conference), it was the memories made Monday through Thursday that will stick with them.

As I talked with them, I remembered the memories of my own days in school. I couldn’t tell you who we played in the fourth game of my senior season, or if I even saw the field that night, but I do remember rocking out to Bone Crusher before practice and dancing to the “2 Fast 2 Furious” theme song after. I remember more from my Homecoming dance, and the ensuing week, than what happened on the field.

Some friends and I were joking not long ago about how grateful we were the pandemic put a pause to any 10-year high school reunion plans last year. But while we were losing out on the chance to reminisce on the old days, today’s kids were missing those days. As adults, we’ve missed opportunities to attend sporting events and concerts. The kids missed opportunities to play sports and instruments.

We’re seeing the path to normal largely speed up, and some of these opportunities are making their way back. The Boilers’ prep band on hand for the Boilermakers’ football finale last week. The usually-spring now-summer sports season that’s in its infancy has plans for those sports to hold state series. And as cool as that is and will continue to be as we hope to be back on track by the fall, as I’ve written before, it unfortunately won’t reinstall the opportunities these kids have lost at winning state titles, holding the Homecoming rally before the big game, or in other sports, playing in marquee events such as soccer’s PepsiCo Showdown.

For kids to come to terms with that, sometimes more easily than others, is really a testament to how much more than student-athletes the kids we cover are. Those Central seniors are just a microcosm of kids Cody Smith, Tiffany Blanchette and I have encountered the past couple months who, as Wilmington football coach Jeff Reents said on last week’s Daily Journal Prep Podcast, have even uplifted the spirits of the elders around them.

FOOTBALL: Central comes back, holds on for fourth-straight SVC title

In a game that came down to the final seconds, the Comets stood tall to end the SVC by winning their fourth-straight conference crown.

Kankakee fell in an early hole it never recovered from in its football season finale at Crete-Monee Saturday.

Bishop McNamara fell to St. Francis in a battle of Top 10 Class 4A teams.

FOOTBALL: Boilermakers outlast Sandburg by one in overtime thriller

In a game that saw more than 50 combined points in the fourth quarter and overtime, the Boilermakers stopped a Sandburg 2-point conversion in overtime to end the season with a 40-39 win.