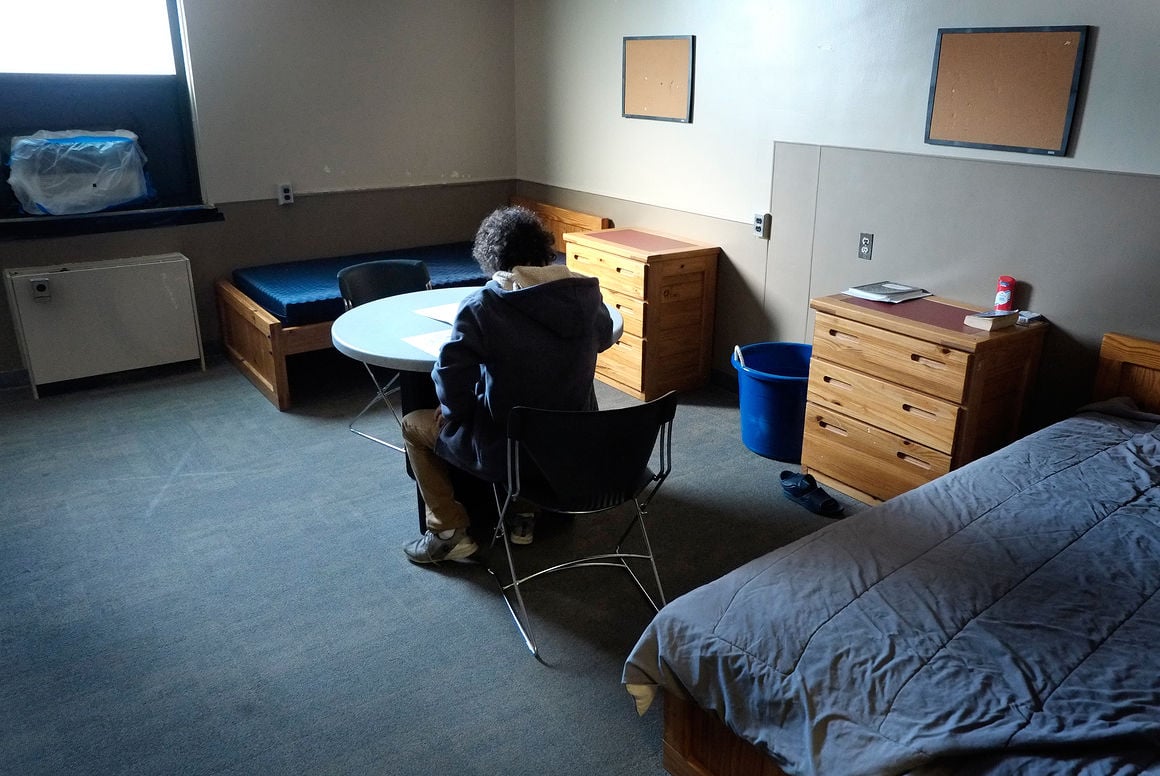 During a few minutes of free time between lunch and "group" a resident of the Resolve Center in Manteno draws for enjoyment in his room. 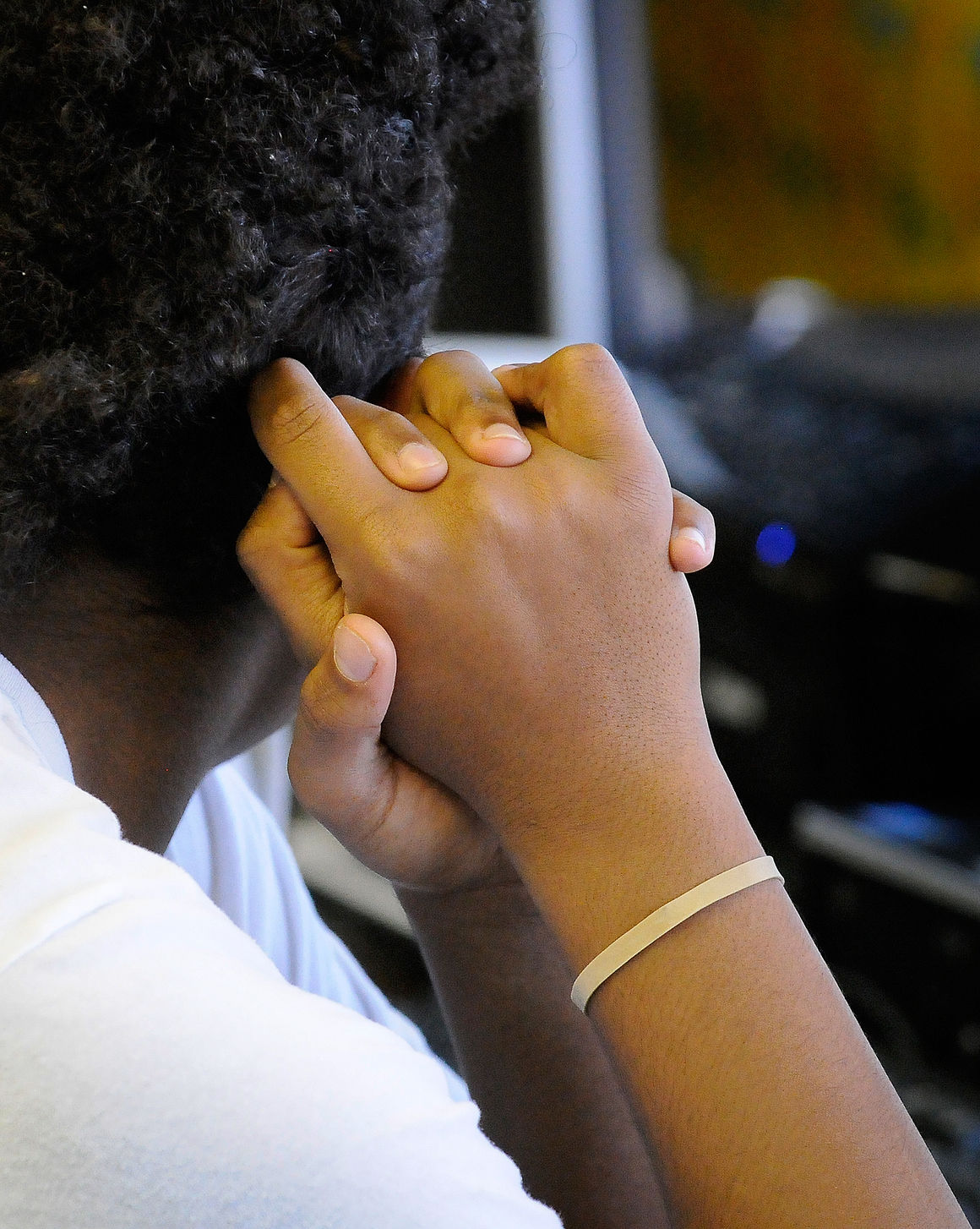 A resident of the Resolve Center in Manteno listens to teacher, Katrina Deutsche-Vaclavik during class at the center. Each resident attends daily classes as they would if they were staying at home. 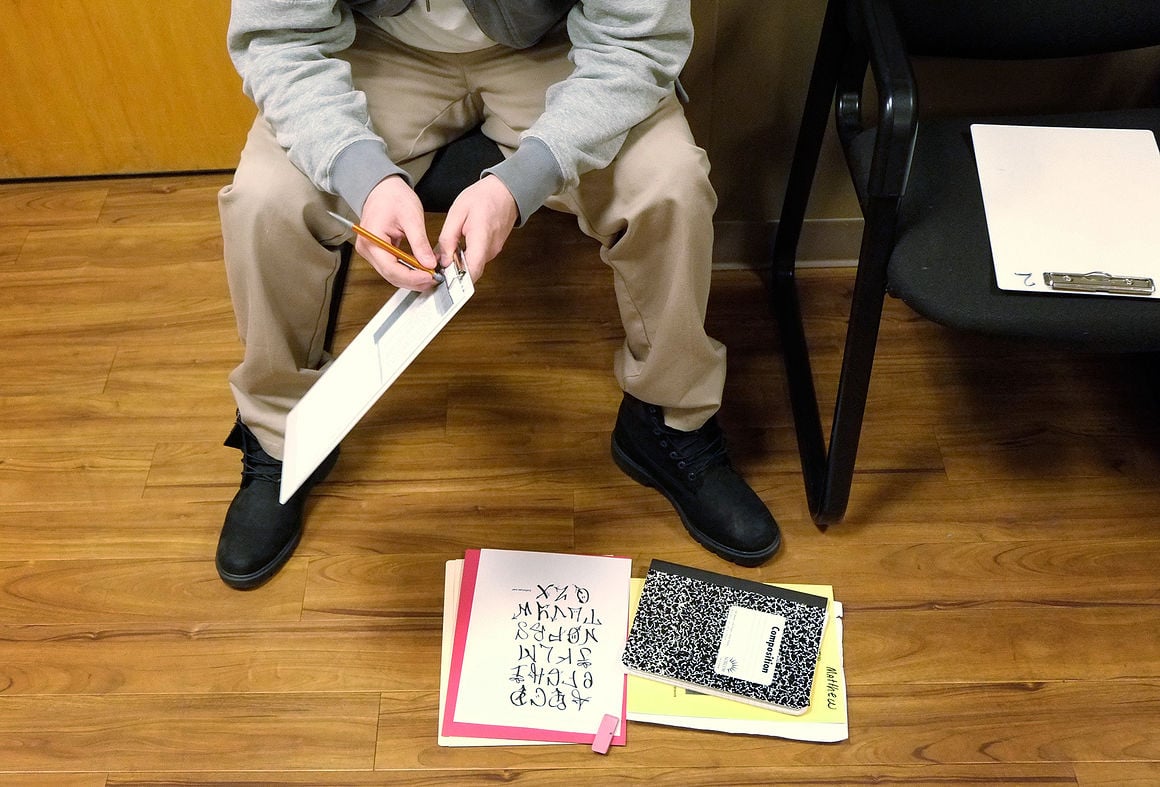 A resident of the Resolve Center in Manteno fills out paperwork during a group therapy session at the center. 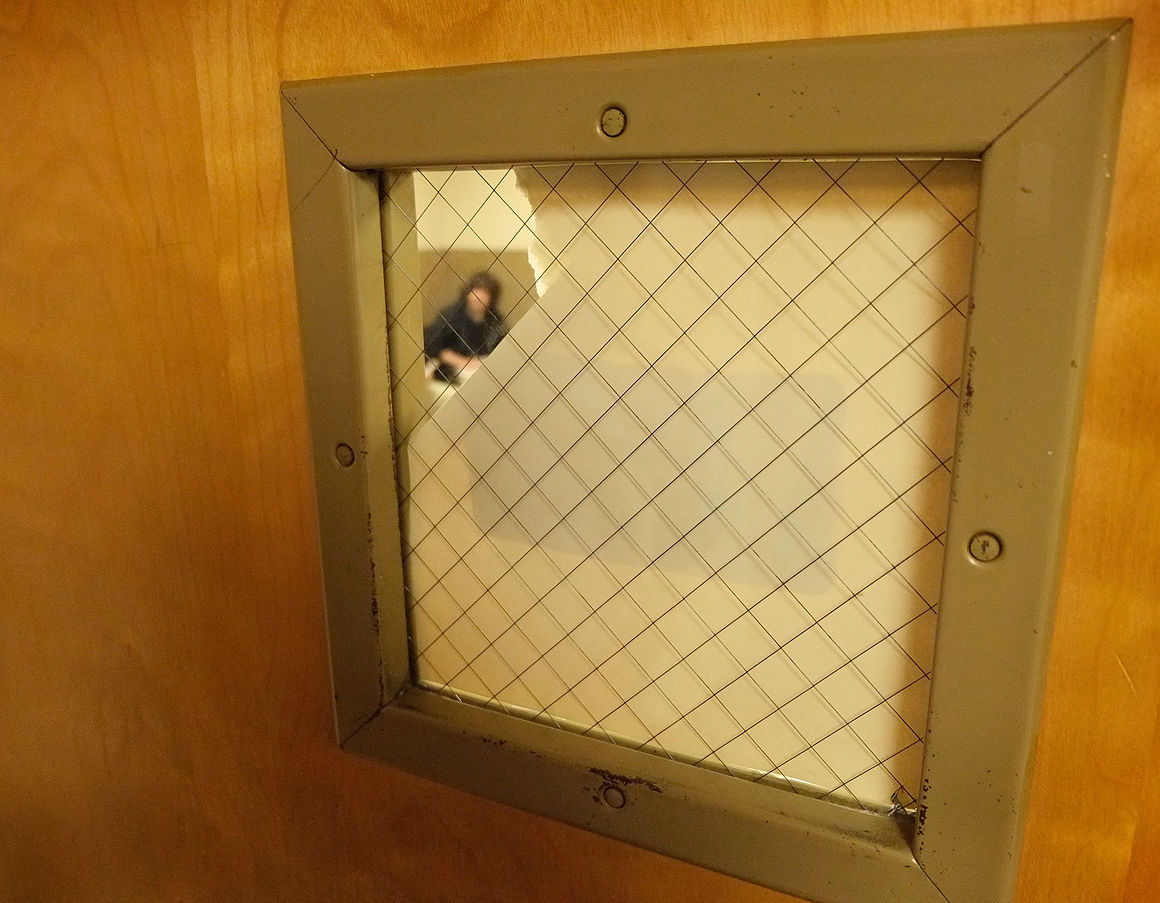 Residents of the Resolve Center in Manteno participate in a daily group therapy session at the center behind closed doors. 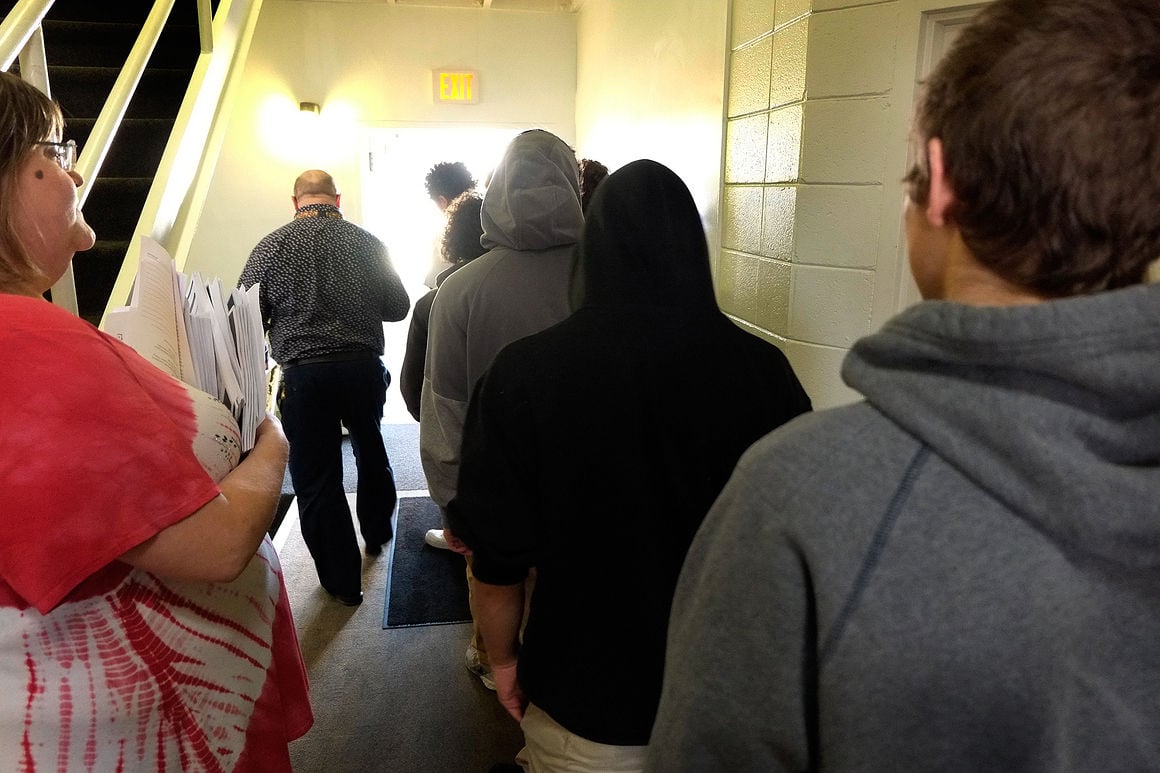 Residents of the Resolve Center in Manteno move to and from their rooms to lunch, school or group sessions in single-file, "non-verbal" lines.

During a few minutes of free time between lunch and "group" a resident of the Resolve Center in Manteno draws for enjoyment in his room.

A resident of the Resolve Center in Manteno listens to teacher, Katrina Deutsche-Vaclavik during class at the center. Each resident attends daily classes as they would if they were staying at home.

A resident of the Resolve Center in Manteno fills out paperwork during a group therapy session at the center.

Residents of the Resolve Center in Manteno participate in a daily group therapy session at the center behind closed doors.

Residents of the Resolve Center in Manteno move to and from their rooms to lunch, school or group sessions in single-file, "non-verbal" lines.

Editor's note: The Daily Journal refers to the teens in this story with initials that do not represent their actual names to conceal their identities. The teens are from communities throughout the state.

Their young, clean-shaven faces beamed as the lieutenant governor sat down with them in a group room. After explaining the cause behind her visit — the opioid crisis — she asked the boys how they ended up in rehab.

The persona of a church group disappeared. Behind those baby faces were stories often heard in courtrooms. Most were there because of probation on a variety of charges — grand theft auto, armed robbery, residential burglary.

On the surface, it appeared to be a stereotype of drug addiction. Stay in the room awhile longer, and you'll find nothing stereotypical about this opioid crisis our nation faces.

These kids are the future. They're in rehab, and how they got there often gets passed off merely as people making poor decisions. So, six of those boys took it a little further, refusing to hide behind those pure white shirts.

They talked to the Daily Journal about their battles with addiction and their goals for the future. They showed how far down the opioid crisis has reached and how they plan to overcome their demons.

Here are their stories:

P.D. overdosed on Xanax in the back of a car he broke into three months ago. The owner of the vehicle found the 16-year-old and called 911.

After being hospitalized for a few days, P.D. was admitted to rehab for the first time. His addiction started with drinking alcohol and using prescription drugs. He then started smoking marijuana. He and his friends eventually progressed to Xanax.

He also was jailed for grand theft auto, battery and striking a police officer. He and his friends once jumped someone at a bonfire.

P.D. first became interested in drugs through his father, who is in jail. However, he avoided heroin, methamphetamine and cocaine because of his father's struggles with the drugs.

"My dad would fight around me when I was really young," P.D. said. "He would shoot up around me. He would smoke weed with me. When I took my ADHD medication, he would give me a bottle of Grey Goose (a brand of vodka) to wash it down. To get me a new pair of shoes, he would take me to the mall and steal them right in front of me.

"I grew up thinking those types of things were fine. I looked up to my dad like he was a good dad and hero. I wanted to be just like him. I fell down his path."

Now, a few months into treatment, P.D. wants to assure his two younger brothers and younger sister don't make the same mistakes he did. He hopes to enlist in the Air Force when he overcomes his addiction.

"I want to set a good example for my younger siblings," he said. "I don't want them to go through the same things I went through. I wasn't fed on a silver plate, but I didn't have the worst childhood. I had to go through some things most kids haven't been through. I just want my siblings to have a normal childhood."

K.S. overdosed on Valium last month and recently was admitted to the Resolve Center for the third time in two years. He has appeared in other outpatient treatment facilities, too.

K.S. started smoking weed when he was 11 years old after stealing it from a sibling. He was 13 years old when he drunkenly burglarized a residence and landed in rehab for the first time. He got kicked out of an outpatient facility for drinking and ended up at the Resolve Center.

In addition to alcohol and weed, he has done cocaine, psychedelic mushrooms, acid, ecstasy, Xanax and hydrocodone. He got into those drugs through friendships he formed through smoking weed and drinking alcohol. He used to break into vehicles to steal money and other items for drugs.

"I wasn't thinking of the consequences," he said. "I was trying to have fun and party."

After completing his second stint at the Resolve Center, K.S. was prematurely released from another outpatient facility for drinking again.

His mother, who battled alcoholism, died last year from complications with alcohol addiction. One of his sisters also battles a heroin addiction and another used to be addicted to benzodiazepine.

Now, after his first overdose, he wants to make his third stint in rehab successful.

"I want to graduate from high school and make my family proud," he said. "I may become a roofer, too. I just want to be a family man, have a wife and kids. I know I can do it if I stick to my plan for getting clean."

M.D. and his brothers got arrested last fall after robbing someone at gunpoint for drugs and money, landing him in his first stint of rehab.

In between Xanax and marijuana, he did acid and cocaine, in addition to drinking alcohol. His mother and stepfather are recovering alcoholics. One of his brothers died, and another is a recovering cocaine addict.

Five months after his first stint in rehab, M.D. returned to the Resolve Center after a relapse. He got kicked out of his house and started running the streets.

"I was trying to escape depression and anxiety," he said. "I have a lot of grief because of my brother's death."

M.D. hopes to get off probation in May, though he recently got arrested for fleeing the Resolve Center. Once he cleans himself of drugs, he wants to get back into wrestling.

"I like it," he said. "It's something to do. Positive people around me. It kept me out of trouble for a while when I got out the first time."

T.O. was 10 years old when he started smoking weed. It became a daily habit when he was 12. At 15, he turned to Xanax, cocaine and prescription medications such a percocet and codeine.

T.O. has been at the Resolve Center the past two months after being placed on probation for burglarizing houses and cars with his friends to afford his drug addiction. He no longer speaks to his father, who was addicted to cocaine and marijuana.

"I fell into a spot I never wanted to be in," T.O. said about his addiction. "I said, 'Screw everything.' I was like a zombie 24/7. I was 17. No job. No license. No car. Pretty much nothing. I lost money. I woke up with random stuff in my pockets. I was mixing drugs. That was rock bottom."

T.O. plans to graduate from high school, get his license and go to college when he gets clean. He either wants to be a lawyer or juvenile correctional officer.

"I feel better and more clear-minded thanks to rehab," he said. "I just want to make sure kids don't do the same things I did. Drugs and addiction are nothing to mess with. They kill."

K.M. has been in rehab for a week after landing on probation for fighting. He was expelled from school for fighting with students and a teacher.

He started smoking weed when he was 10 years old and started smoking more to cope with his father's struggles. His father developed a cocaine addiction that caused him to suffer two heart attacks and a stroke.

"I was the good little kid who went to a Catholic school," K.M. said. "Then, I met this kid who was getting arrested for starting fires. He eventually asked me to smoke pot. The next thing I knew, we were smoking weed in the woods."

Because of his father's struggles, K.M. has stayed away from harder drugs. He has lost two friends to overdoses — one from a bad batch of heroin and another from fentanyl mixed with Xanax. His uncle also died from an overdose.

"Weed is just my thing," K.M. said. "I was self-medicating for anxiety and depression. It just calms me down."

Now, two weeks into rehab, K.M. has used his time from home to focus on how to overcome stress. His goal is to get a job, save money and eventually become a lawyer.

"Drug addiction isn't a joke," he said. "I've lost so many people to drugs. I just want people to not go overboard."

H.M. was in his first stint of rehab when his father died from a drug overdose. Now at the Resolve Center for the second time, he is fueled by his father's death to get clean.

"Being here makes me think my dad will be proud of me for trying to get clean," he said. "I want to be there for my mom and 10-year-old sister. I always worry about them."

H.M. was 15 when he tried cocaine for the first time. A year later, he was trying a slew of opiates.

"I was raised around drugs. They are easy to find," he said. "I saw my father use drugs. He would want me to use his death as motivation to get clean."

H.M. landed in rehab after being placed on probation for residential burglary and criminal damage to property.

He was sober for a month and a half after his first stint in rehab, before relapsing because of struggles with family issues.

Now, he wants to get clean for good, return home and get a job to help his mother and sister.

"I am changing my outlook by knowing I can stay sober if I want to," he said. "Nobody here can keep me sober. Only I can. You can sit here for years, get clean, get out and still end up back here if you don't stick to the steps. I want to do good this time."