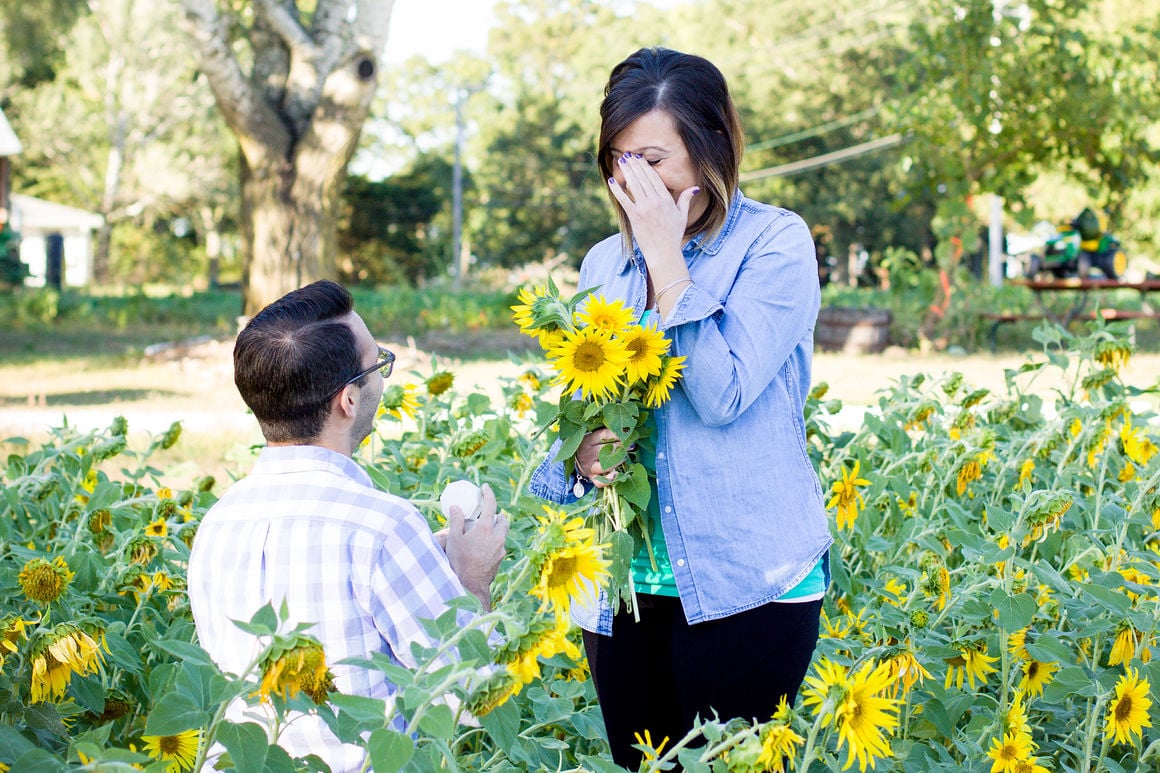 Andy Burton, 25, proposes to his fiance Joanna Montalto, 33, in the sunflower field grown by John Panozzo. Driving past the flowers, Burton realized he had to change his plans and propose there. 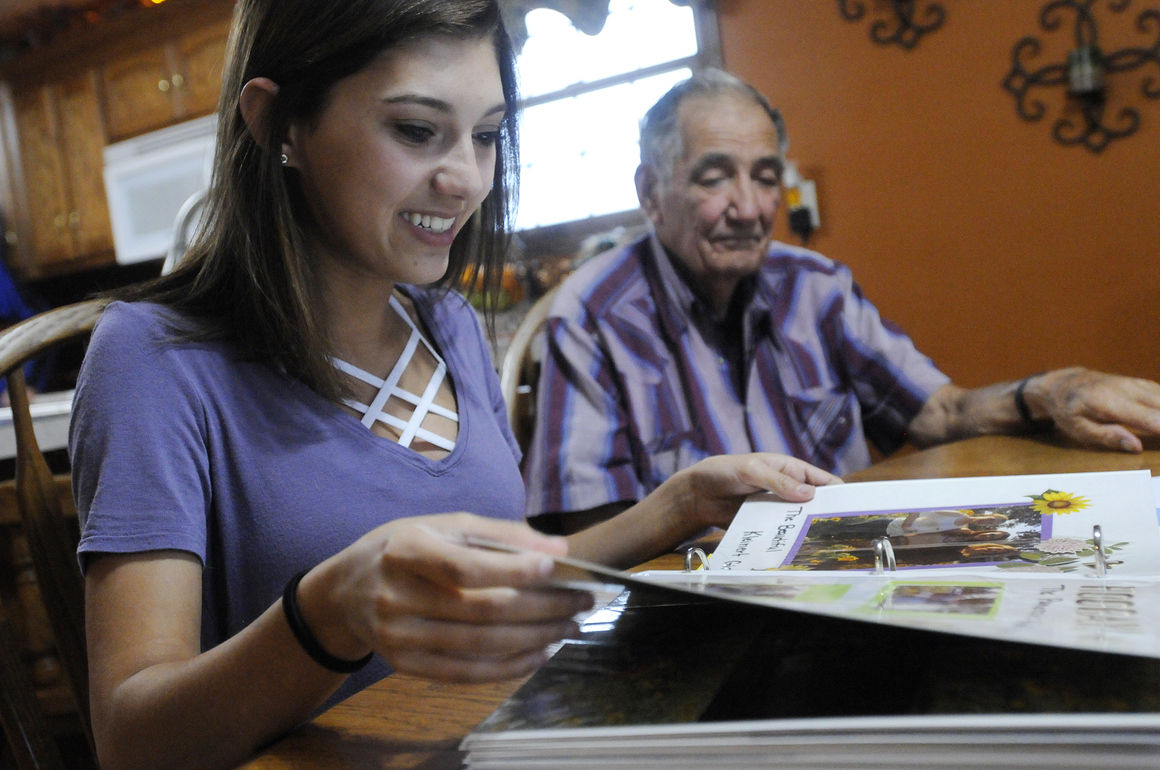 John Panozzo, right, and his granddaughter, Natalie Jordan, look through the surprise scrapbook she gifted him on his 85th birthday. The book includes more than 200 pictures of the families, couples and kids who stopped to visit Panozzo's field of free sunflowers along Illinois Route 17.

Andy Burton, 25, proposes to his fiance Joanna Montalto, 33, in the sunflower field grown by John Panozzo. Driving past the flowers, Burton realized he had to change his plans and propose there.

John Panozzo, right, and his granddaughter, Natalie Jordan, look through the surprise scrapbook she gifted him on his 85th birthday. The book includes more than 200 pictures of the families, couples and kids who stopped to visit Panozzo's field of free sunflowers along Illinois Route 17.

John Panozzo originally planted his sunflowers for the birds, but the flowers, on an empty patch right in front of Panozzo's home on Illinois Route 17 directly west of Kankakee in Limestone, began to attract visitors.

"I bought sunflower seeds for the birds and they bloomed so nice, I decided we should let people have some," Panozzo said. He put up a sign telling people they could take flowers for free, and soon, his yard had plenty of visitors.

All the while, his granddaughter, Natalie Jordan, a Herscher High School junior, was putting together a surprise. At his 85th birthday party last week, Jordan presented her grandfather with a scrapbook of more than 200 pictures of the families, couples and kids who stopped to take a flower home. She put out a call on Facebook asking people to pass along their snapshots, and about 500 responded.

"We've always been very close," Jordan said of her grandfather. "He's a person I look up to; a guy that sticks up for other people. I wanted to show him the smiles he puts on people's faces. I wanted to give back, but I knew it couldn't equal what he's given to me."

Panozzo, a retired farmer who likes to joke that he's "just tired," had no idea the impact his flowers would have on people.

"I was surprised," he said of the book. "I didn't have no idea. I'm glad people enjoyed them. I planted them for the birds, and now the people will enjoy them, too. There were bees out there and butterflies, too. Everyone enjoyed them."

One couple in particular enjoyed the flowers. Andy Burton and Joanna Montalto are both teachers at Bradley East Elementary School, who fell in love when their classrooms started a prank war with each other. Montalto's grandmother came from Kansas, where the sunflower is one of the state symbols.

"She passed her love of sunflowers to all the women in my family. I even have a sunflower tattoo on my ankle because of my grandma and my family's love of flowers," Montalto said.

When Burton drove past the field, he changed his plans to propose during Columbus Day weekend. The sunflowers were too perfect. He told Montalto they were going to take a family photo shoot with his parents, but first he wanted to pick some flowers for her mom.

"I was dropping hints for 48 hours before it," Burton said with a laugh. "Making sure she was wearing one of her favorite shirts, making sure her nails were cleaned up."

"I was totally surprised. Andy and I knew we were going to get engaged and get married, but I had absolutely no clue that he had planned it this way, so it was a shock to me," Montalto said.

Burton and Montalto plan to enjoy their engagement for a while before setting a date. Meanwhile, Panozzo already has plans to give away sunflowers next year. He's been getting plenty of calls from people who tell him how happy the flowers have made them.

"People just said thank you, and that they enjoyed themselves," he said. "Sunflowers make people smile. You ever see a yellow smiley face? It's a sunflower."