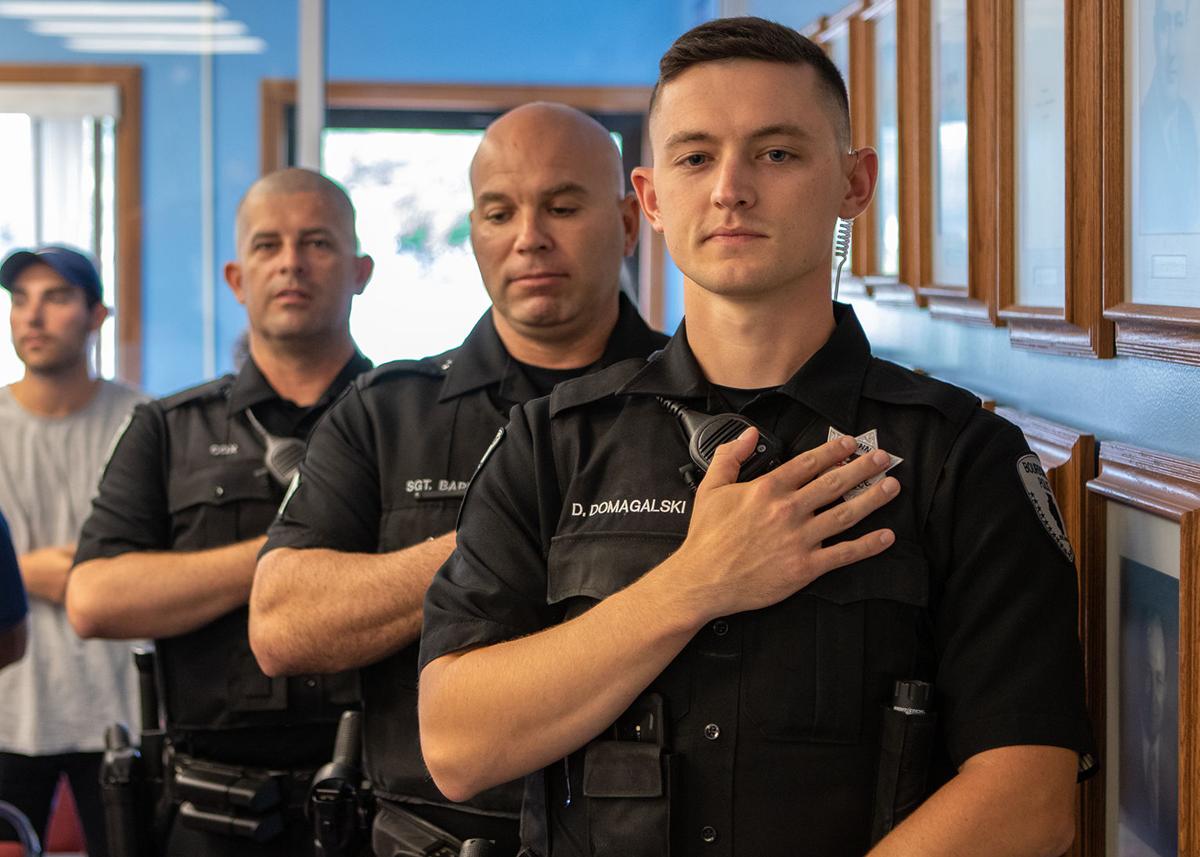 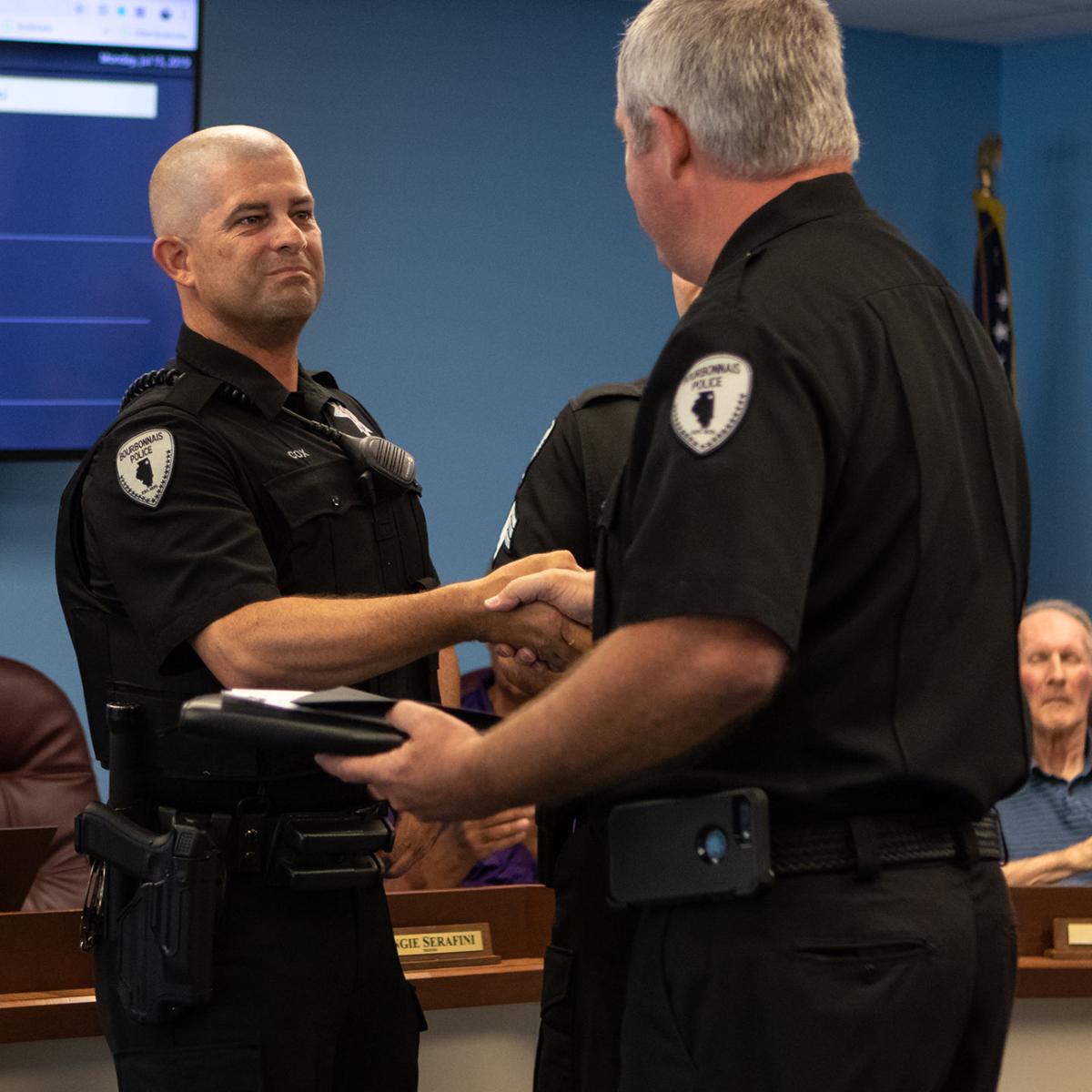 Detective Andy Cox, left, of the Bourbonnais Police Department, shakes hands with Police Chief Jim Phelps during Monday’s Bourbonnais village board meeting. Cox was honored for reviving someone who overdosed on fentanyl on June 20. 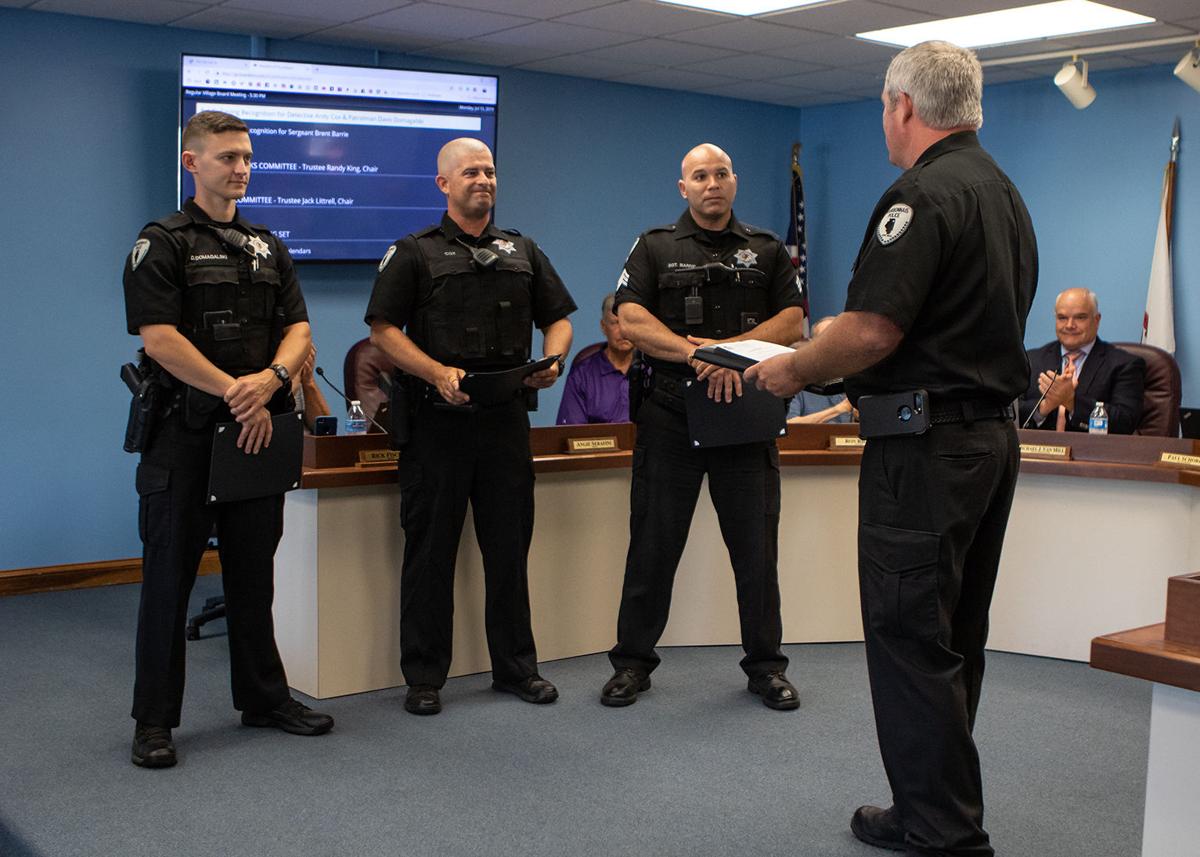 Detective Andy Cox, left, of the Bourbonnais Police Department, shakes hands with Police Chief Jim Phelps during Monday’s Bourbonnais village board meeting. Cox was honored for reviving someone who overdosed on fentanyl on June 20.

BOURBONNAIS — Over the past few decades, police have taken on more medical duties in addition to fighting crime.

The Bourbonnais Police Department has skillfully handled these expanded duties at least a couple times this year.

On Monday, the Bourbonnais village board honored Patrolman Davis Domagalski and Detective Andy Cox for saving two people from opioid overdoses at Tri-Star Estates, a mobile home community north of the village.

Domagalski was patrolling the roads on Feb. 20 when an ambulance call came through. He noticed all of the Kankakee County sheriff’s police units were occupied, so he responded to the call.

A man’s mother found him unresponsive. Domagalski administered a dose of Narcan and revived the man. The Bourbonnais Fire Protection District took over and transported the man to a local hospital.

It was Domagalski’s fourth medical save in his two years with the Bourbonnais Police Department. The 23-year-old graduated from Olivet Nazarene University in 2017.

“At the police academy, they never mentioned we would be on so many medical calls,” Domagalski said. “When I responded to my first overdose victim, I became aware of it. Other veteran guys talked about it. Andy has given me some pointers. I carry that in the back of my head for when the right situation comes.”

Bourbonnais Police Chief Jim Phelps said it is uncommon for an officer to have that many overdose saves so early in a career.

“I hope Davis is close by if I have a medical issue,” Phelps said. “That’s very unusual. He has been in the right place at the right time. He has always been on afternoons. That’s our busiest shift. He has definitely seen his fair share of activity in his two years.”

Cox, an 18-year police veteran, was on his lunch break on June 20, and the Bradley Police Department received a call at Walmart. He went to assist on the call just as Bradley completed it. On his way back, an ambulance call came in for a possible fentanyl overdose at a mobile home.

The caller led him to an unresponsive woman in a hallway. Cox administered two doses (8 milligrams) of Narcan and performed CPR until the woman started breathing again. Bourbonnais firefighters and paramedics gave the woman another dose of Narcan to complete the rescue.

“It’s always a great feeling to be in the right place at the right time,” Cox said. “That’s what we always hope for in this job. We never hope for anything bad for people, but we hope we are there when someone is in need.

“You hope that this person takes advantage of the second chance they were given and get on to a productive path to recovery.”

It was the first time Cox responded to a confirmed fentanyl overdose. However, he is used to performing medical rescues.

In addition to being a detective, Cox is an emergency medical technician for Riverside Healthcare and the Multi-Agency Emergency Response Team.

In February, the Daily Journal featured Cox and Domagalski in a story that detailed first responders’ perspective from the front lines of the opioid crisis.

The recognition from the village board and the public is uplifting to the officers, Phelps and Domagalski said.

“It motivates you,” Domagalski said. “When the chief and mayor pause the village board meeting to recognize you in front of the community and to have the Journal there, it’s a good feeling. It makes you more passionate about your job. It makes you ready to get that next call and respond to another crisis.”

In addition to recognizing Cox and Domagalski’s saves, the village board honored Sgt. Brent Barrie for completing a 400-hour course on police administration leadership at Northwestern University.

It was the first time Barrie returned to school since the 42-year-old husband and father of two children graduated from Kankakee Community College in 1997.

“That’s a very big commitment as an adult, husband and father to take on that challenging and demanding course while still working,” Phelps said. “It is a great accomplishment and essential component to climb higher in the chain of command.”

The Daily Journal will have a more in-depth feature on Barrie’s return to school in the upcoming Weekend Edition.

In a news release announcing Cox and Domagalski’s heroics, Bourbonnais assured it was aware of a recent article by the Chicago Tribune that described the village as “sleepy.”

A Chicago media outlet recently called Bourbonnais "sleepy" in an article. I think the village took note of that.I'll be at tonight's village board meeting for @TDJnews. pic.twitter.com/ncQtCKfpuw

“Some may consider Bourbonnais a ‘sleepy’ village,” the news release read. “This can be attributed to the ongoing efforts of the Bourbonnais Police Department who work tirelessly to enforce the mission ‘to serve and protect all persons and property within the jurisdiction of the village of Bourbonnais.’”

On June 27, the Chicago Tribune published a preview of Bourbonnais for this year’s Chicago Bears training camp.

“Now in its 18th season in Bourbonnais and set to open to the public July 27, the camp has certainly put the sleepy village of about 18,000 people in Kankakee County on the map,” the article read.

The article was published the same week as the Bourbonnais Friendship Festival and Kankakee River Fishing Derby. The Wall That Heals, a traveling three-quarter replica of the Vietnam War Memorial, also was at Perry Farm that weekend.

Village officials acknowledged that “sleepy” was part of its recent round of news releases because of the Tribune article.

“Obviously, it’s something you’re dealing with from the Chicago media,” Mayor Paul Schore said. “I think there’s a fair amount of things going on here. We’re a little above ‘sleepy.’”

View the video at daily-journal.com