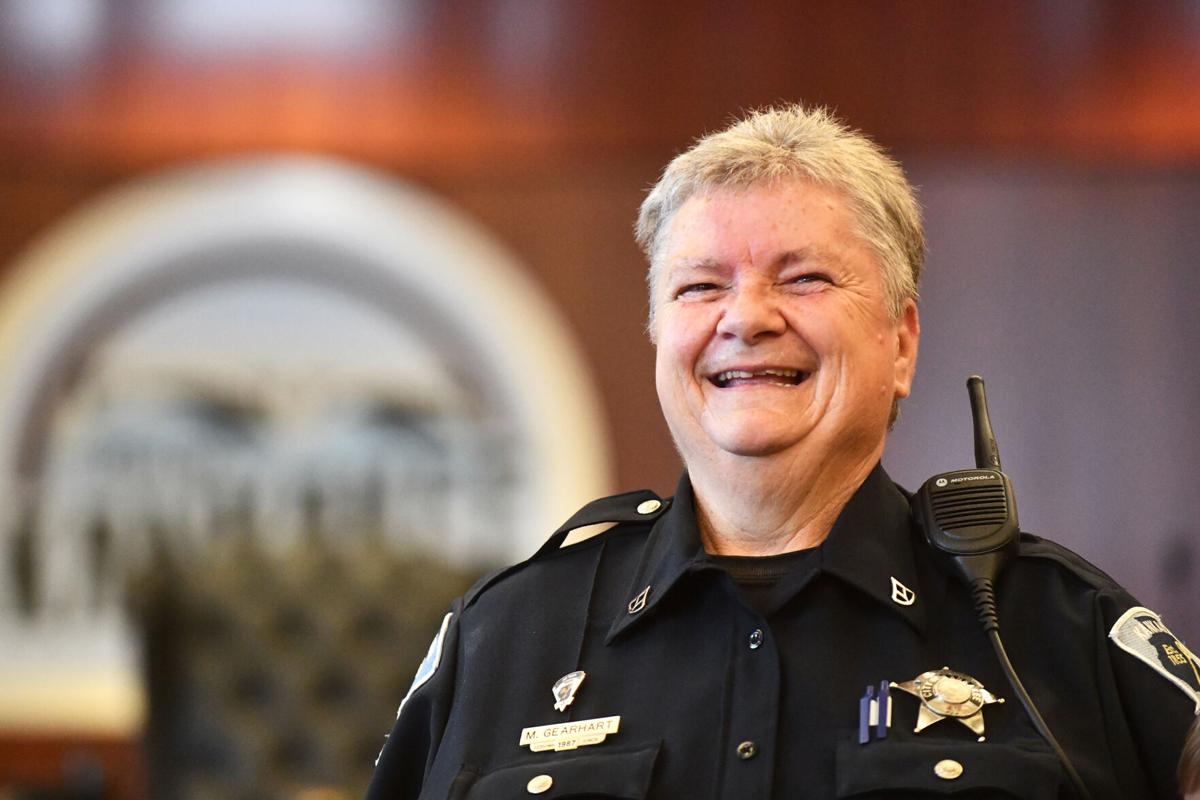 Kankakee Police officer Marci Gearhart smiles toward the large crowd that gathered for her retirement ceremony at the Kankakee City Hall chambers on Monday. Gearhart served nearly 34 years, a female officer record, and was one of only two women officers when she was hired in 1987. 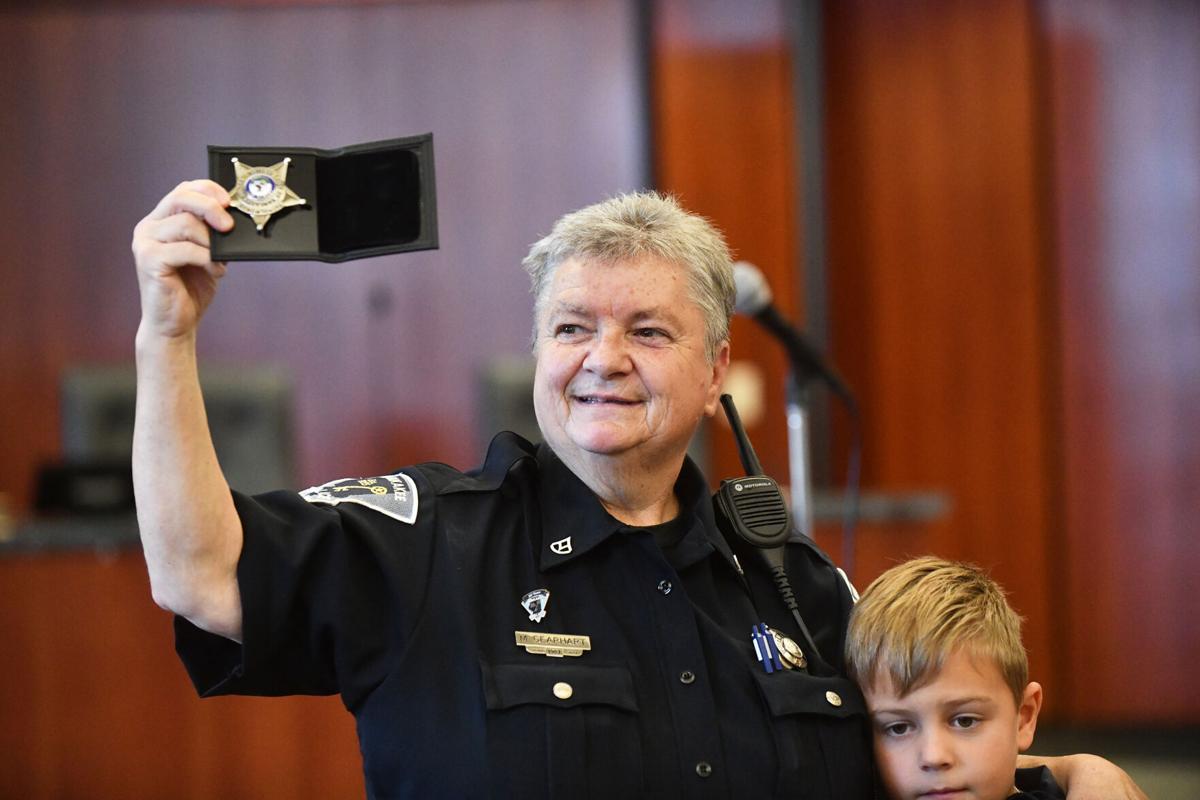 Kankakee Police officer Marci Gearhart holds up her retirement badge for the large crowd that gathered for her at the Kankakee City Hall chambers on Monday as her great nephew Kyler Dunbar, 7, stands at her side. Gearhart served nearly 34 years, a female officer record, and was one of only two women officers when she was hired in 1987. READ MORE. 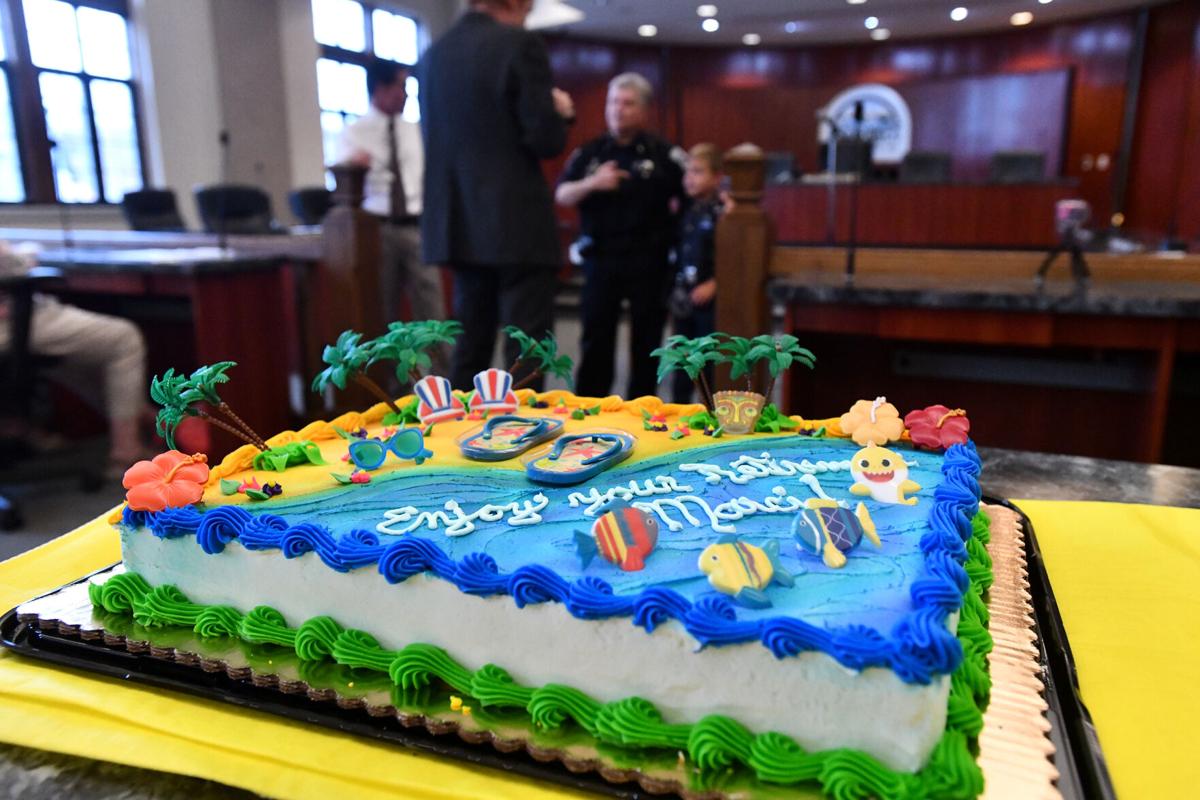 Kankakee Police officer Marci Gearhart smiles toward the large crowd that gathered for her retirement ceremony at the Kankakee City Hall chambers on Monday. Gearhart served nearly 34 years, a female officer record, and was one of only two women officers when she was hired in 1987.

Kankakee Police officer Marci Gearhart holds up her retirement badge for the large crowd that gathered for her at the Kankakee City Hall chambers on Monday as her great nephew Kyler Dunbar, 7, stands at her side. Gearhart served nearly 34 years, a female officer record, and was one of only two women officers when she was hired in 1987. READ MORE.

KANKAKEE — After signing off her shift for the final time in her nearly 34 years as an officer in the Kankakee Police Department, Marci Gearhart was overwhelmed by the number of people who gathered for her retirement ceremony.

More than 75 people attended the celebration in the city council chambers at the Donald E. Green Public Safety Center, which also houses the police department.

“She has a bigger fan base than I have ever seen for anybody. I don’t know if we have enough cake for everyone,” Police Chief Robin Passwater said before awarding Gearhart her retirement police badge. Her 7-year-old great-nephew, Kyler Dunbar, stood next to her in the police outfit she bought for him a few years ago.

After the pomp and circumstance was completed, the 64-year-old Gearhart spent the next 90 minutes greeting well wishers, taking pictures, stopping the line to tell a story about that person and for giving each one of them a big hug.

They were her co-workers, elected officials, family, longtime friends, residents she met during her daily patrols and two of her high school English teachers.

“Police officers don’t get personal because it is a business, it is a job,” Gearhart said. “Fortunately I have been able to take that a step further and I have taken it and intertwined with people’s lives.

“People have told me stories about their families. Personal things you wouldn’t normally hear because they have entrusted me and gotten that personal feeling or have personally asked for me. It makes me feel good. We have built a bond.”

Passwater said through the years the department has received many letters about Gearhart and all her good work.

“That is a Kodak moment for me,” Gearhart said. “It is very touching.”

After graduating from Dwight High School in 1975, Gearhart moved to Peoria and for the next 13 years worked as a security guard at an ice cream factory.

Gearhart got interested in becoming a police officer. She received offers from Peoria and Kankakee. Gearhart said she chose Kankakee because it was a municipality and there was always something going on.

Gearhart joined the Kankakee Police Department on Aug. 15, 1987. She was the second female officer hired by Kankakee.

Passwater said she is in the top five for service by all members of the force.

After Gearhart’s retirement, there are eight female officers among the force’s 55 sworn officers. Another female officer is currently at the police training academy and two more are in the process of being hired, Passwater said.

One of the eight women on the force is Sgt. Lacie Harsy, who is the first woman to earn the sergeant rank with the department.

Harsy credited Gerhart with encouraging her to go for sergeant. Gearhart said Harsy will make lieutenant.

“Marci is hands down the most dedicated officer I know and truly knows what it means to serve her community,” Harsy said. “If I had a dollar for every time I heard a compliment from a community member for Marci, I could retire today with her.

“Marci is known for her big heart and love for animals, but for me, in many ways Marci has been a mentor and has given me motivation to rise against challenges only known to females in the field. I’m proud of Marci and I am so glad she can finally enjoy life outside of KPD.”

Gearhart said after the first female officer left, she was the lone female in the department for five years.

It was during her training through Illinois State Police school Gearhart said she was put to the test.

“My dad told me something long ago,” Gearhart said. “You do what you want to do. You look straight ahead. You put your foot down and be what you want to be. That has stayed with me all these years.

“When I graduated [from police training], my instructors said they were tough on me because they wanted me to be able to handle what was going to be tough in many ways,” she continued. “I have had many, many challenges and stood there through it.”

Passwater, who has been on the force since 1989, said Gearhart was always early for work and willing to work overtime.

“Even on her last day, she did as much as she did on a regular work day,” he said.

One thing that is not work is Gearhart’s love for animals. She has owned several rescue dogs and cats.

“We would have a call for an animal, and Marci was always there to take care of the animal,” Passwater said.

Animals are one of Gearhart’s three passions, with the other two being children and senior citizens.

She will continue her rescue work in Florida, where she is moving.

“She’s off to Florida and she will be missed by many,” Passwater said.

Former Kankakee Deputy Chief John Gerard, a 34-year member of the Kankakee Police Department, who also served for about one year as its acting police chief in the early 1990s, died Tuesday.

In the continued restructuring of the Kankakee police and fire departments now under new leadership, several recent promotions have been made.