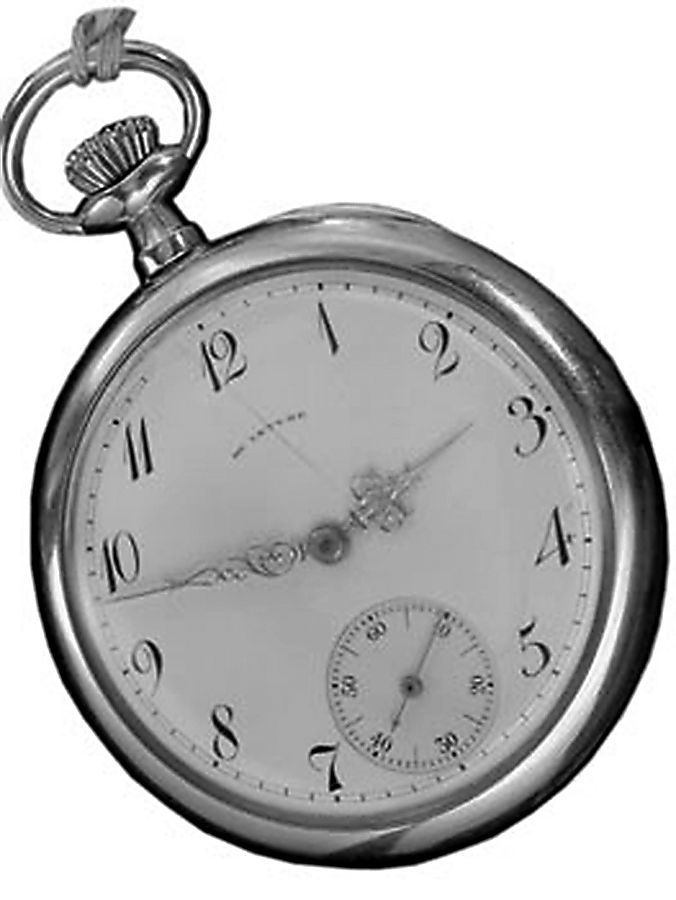 One of the eight pocket watches produced by the McIntyre Watch Company of Kankakee. It is a Size 12 watch, approximately 1½ inches in diameter. 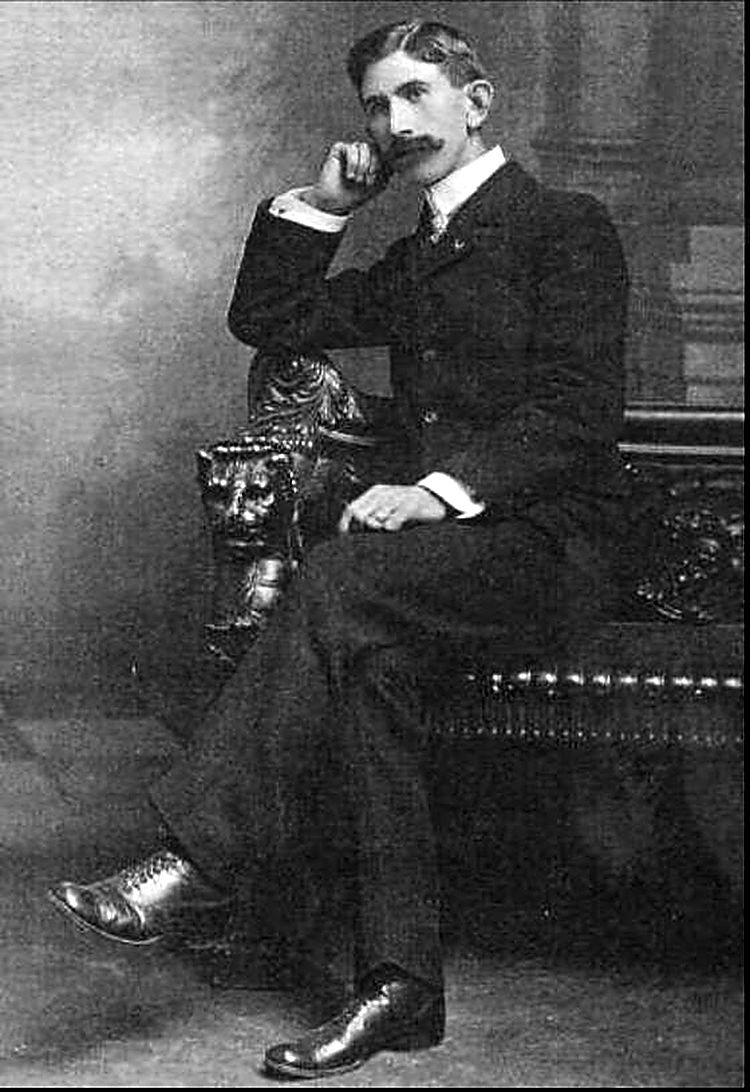 Fred McIntyre, a native of Pennsylvania, came to Kankakee in 1908 to open the McIntyre Watch Company. Although it announced plans to build a large factory, the company failed before it could be built. 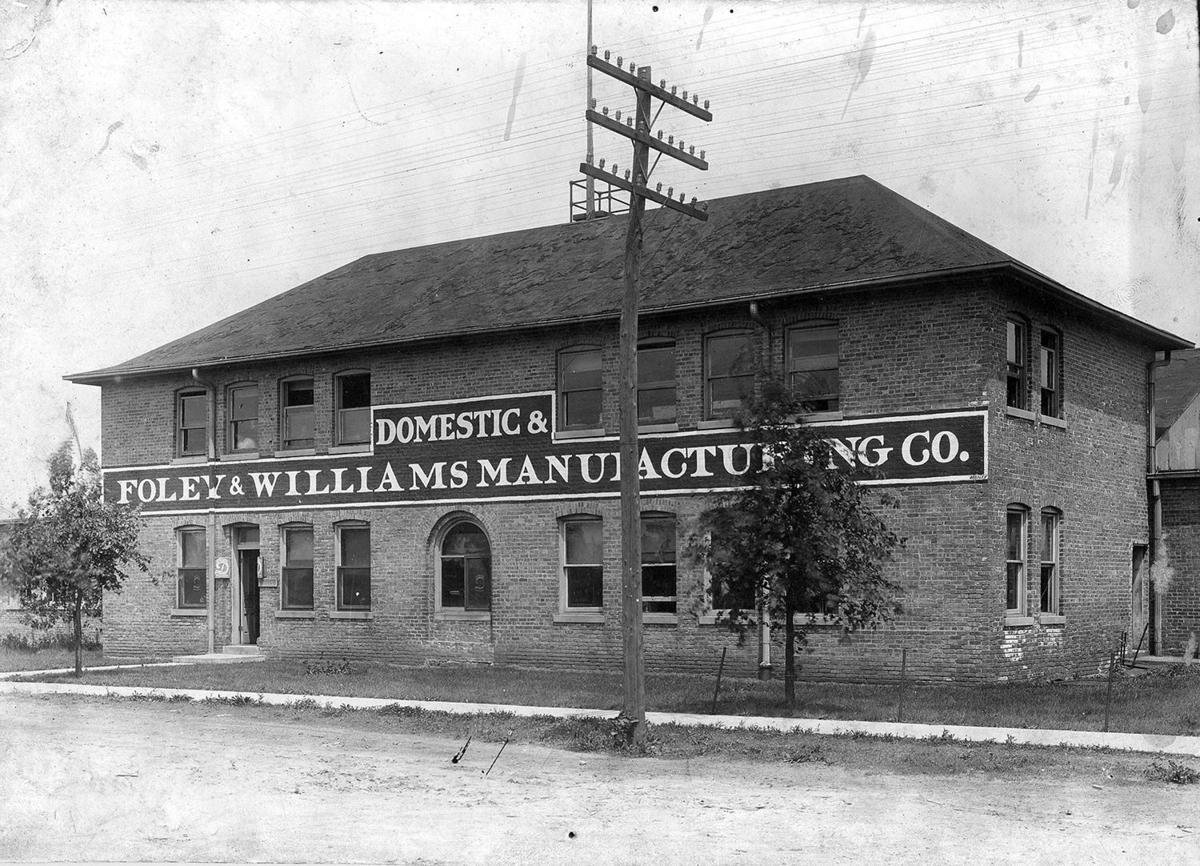 The Foley & Williams Manufacturing Company erected this building in 1902 to produce sewing machines. From 1908 to 1911, the McIntyre Watch Company rented space in the building. INSET: Fred McIntyre, a native of Pennsylvania, came to Kankakee in 1908 to open the McIntyre Watch Company. Although it announced plans to build a large factory, the company failed before it could be built.

One of the eight pocket watches produced by the McIntyre Watch Company of Kankakee. It is a Size 12 watch, approximately 1½ inches in diameter.

Fred McIntyre, a native of Pennsylvania, came to Kankakee in 1908 to open the McIntyre Watch Company. Although it announced plans to build a large factory, the company failed before it could be built.

The Foley & Williams Manufacturing Company erected this building in 1902 to produce sewing machines. From 1908 to 1911, the McIntyre Watch Company rented space in the building. INSET: Fred McIntyre, a native of Pennsylvania, came to Kankakee in 1908 to open the McIntyre Watch Company. Although it announced plans to build a large factory, the company failed before it could be built.

If you were in John G. Knecht’s clothing store in downtown Kankakee in the early 1900s and needed to know the time of day, you could have asked one of the well-dressed salesmen. He would promptly grasp a small gold chain to pull a large watch out of his vest pocket, click open its protective lid, and tell you the correct time.

Until wristwatches became popular in the 1920s, timepieces for both men and women were, literally, “pocket watches.” For men, the most popular-sized timepieces were about 1½ inches to 1¾ inches in diameter; women’s watches were smaller, typically between 1 inch and 1½ inches.

Watch manufacturing in the United States was a thriving industry, mass-producing timepieces by the millions each year. In Illinois, there were large watch factories at Rockford, Elgin, and Springfield. On June 13, 1910, Kankakee Daily Republican readers learned that their city was about to gain its own large watch factory.

The newspaper article featured portraits of two key figures in the watch company, President Fred McIntyre and Master Watchmaker Charles E. DeLong. The two men most likely met in 1895 at the Bradley Polytechnic Institute in Peoria, Illinois. DeLong was a watchmaking instructor at the Peoria school; McIntyre, who owned a jewelry store in McAlester, Indian Territory (now Oklahoma), enrolled in the school to learn watchmaking.

In 1901, the two men began working together in McAlester. Thomas W. McIntyre, a prominent watch collector who maintains a website devoted to the watch company’s history, notes that “Charles...joined forces with Fred in Fred’s jewelry business and began developing designs for the McIntyre Watch. ... Charles and Fred worked together for 4 years ... developing patents and watch models.”

In 1905, Fred closed his store, and the two men moved in different directions: Charles relocated to Dallas, Texas, to open a watchmaking school, while Fred went “Back East” to find a site where he could set up the McIntyre Watch Company.

McIntyre found what he was seeking in 1908: a substantial stone building on the western edge of Kankakee, Illinois, where he could rent space. The building was owned by the Foley & Williams Manufacturing Company, which made sewing machines.

By August, 1908, McIntyre had rounded up a group of investors and began the process of incorporating the McIntyre Watch Company with a capital stock of $200,000. Among the investors in the corporation were a number of prominent Kankakee men: Len Small, former Illinois State Treasurer and future Governor; hardware merchant Lawrence Babst; druggist J. J. Schubert; brewer W.H. Radeke, and attorney William J. Brock. Those men, along with four other investors and McIntyre, were elected to the company’s board of directors. William Brock was chosen as company president; McIntyre’s title was General Manager.

The company’s stockholders met in June 1909, and voted to increase the capital stock of the corporation from $200,000 to $500,000. At some point between that meeting and the factory announcement a year later, McIntyre replaced Brock as company president.

Master watchmaker Charles DeLong came to Kankakee in 1908 to resume his design work and hand-build sample watches. He presumably was in charge of setting up the factory for production, while McIntyre was “on the road” recruiting dealers to sell the company’s products.

In his sales diary, McIntyre recorded the results of his selling efforts during early 1910. “Met buyer…practical man. Evidently much pleased with watch. … Said our prices were not too high and that they would sell,” he wrote after one sales call. Following another call, he recorded that the jeweler showed his sample to the store’s watchmakers and “told them to look at the first fine American watch ever made.”

McIntyre’s sales efforts were apparently successful, since the newspaper announcement of plans for the factory had noted that the company’s “Output sold a year ahead.” Despite that, the McIntyre Watch Company never really began production. Plans for erecting the factory fell through, and in 1911, the company was evicted from its rented space in the Foley & Williams building. The company was forced into receivership; it finally went out of existence in 1913.

In its lifetime, the McIntyre Watch Company produced only eight hand-made timepieces, including the “first fine American watch ever made” that had been created by Charles DeLong. That watch and three others are in private collections; the whereabouts of the remaining four are unknown.

After the company failed, DeLong remained in the watchmaking industry, while McIntyre developed companies manufacturing automobile accessories and industrial pumps. DeLong died in 1942; McIntyre in 1954.

“Fred and Charlie were very close friends throughout their lives,” noted watch collector and historian Thomas W. McIntyre, “and the failure of the McIntyre Watch Company was just a bump on the journey.”

The Foley & Williams factory building where the watch company rented space was the first building on what would become one of Kankakee County’s major industrial sites. What manufacturing plants were later located there?

Answer: Foley & Williams went bankrupt in 1914; the property was bought by Sears, Roebuck and Company, which moved its EZ-Est Way stove plant there from Chicago Heights. In 1929, the plant became the Florence Stove Company and then, in 1958, the Geo. D. Roper Corp. After almost 70 years of producing cooking equipment, the huge plant on Kankakee’s west side along Illinois 17 closed its doors in 1982. The last buildings on the site were demolished in August 2016.