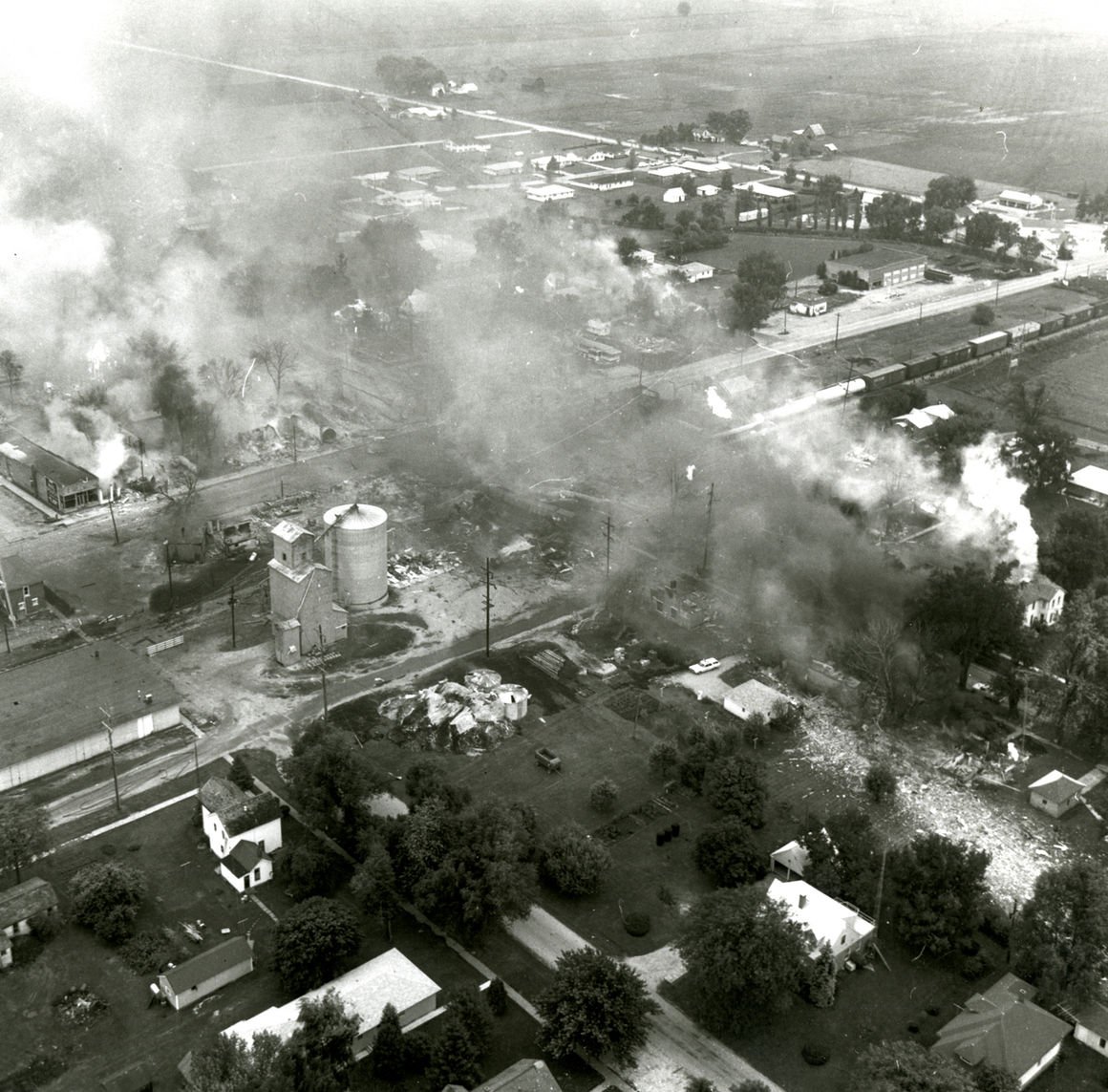 Four hours after the derailment, thick smoke shrouded the center of Crescent City. The town’s main business street, U.S. Route 24, runs diagonally across the center of the photo. One of the still-standing store buildings can be seen burning at far left. 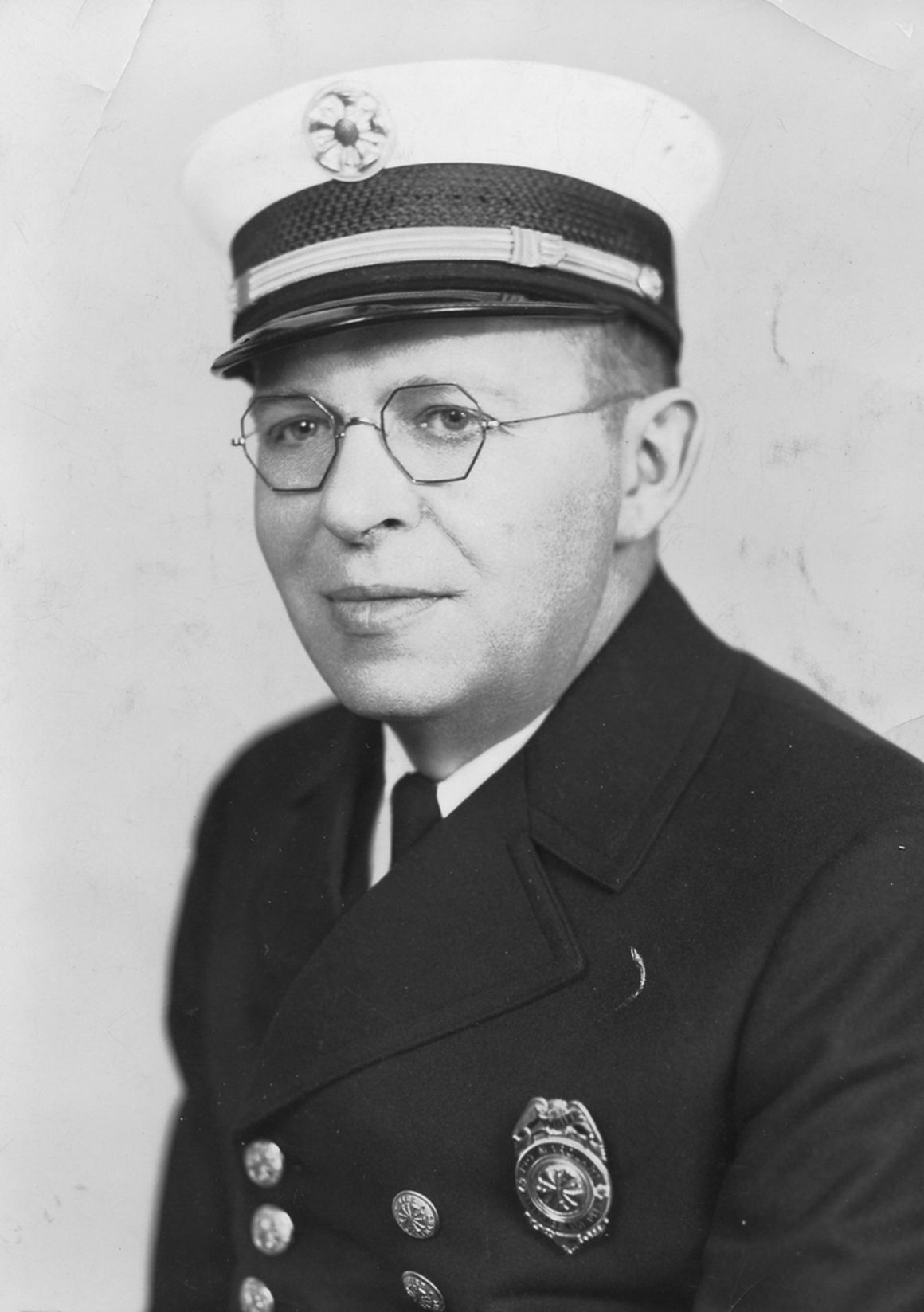 Tom McVey, a retired Kankakee fireman who was at the Crescent City disaster.

Four hours after the derailment, thick smoke shrouded the center of Crescent City. The town’s main business street, U.S. Route 24, runs diagonally across the center of the photo. One of the still-standing store buildings can be seen burning at far left.

Tom McVey, a retired Kankakee fireman who was at the Crescent City disaster.

Father's Day usually is a time for quiet family celebrations.

But June 21, 1970, was a very different Father's Day in the Iroquois County community of Crescent City. It was — and always will be — "the day the town blew up."

Shortly before 7 a.m. that Sunday, an eastbound 113-car freight train was rolling through Crescent City on the Toledo, Peoria and Western Railroad tracks. The tracks ran parallel to and just north of Main Street (U.S. Route 24).

Suddenly, one of the cars derailed as it passed through the business district. Behind it, a string of tank cars filled with compressed propane gas left the tracks and overturned. Debris from the derailment caught fire, and at about 7:30 a.m., one of the propane tanks exploded in a huge fireball. Throughout the next several hours, five more of the 30,000-gallon tank cars would explode and burn, totally destroying 11 business buildings and 15 homes, damaging at least 50 other buildings, and injuring an estimated 70 people. Amazingly, no one was killed.

The devastation was incredible, forming a landscape of loose bricks, splintered wood, broken glass, blown-down and blackened trees, burned-out automobiles and huge pieces of steel from ruptured tank cars. Gov. Richard Ogilvie toured the wrecked town the day after the explosions. A World War II veteran, he said the scene reminded him of "towns I saw in France in 1944 and 1945 — it looks like a bomb hit the town."

The first person injured that morning was Cheryl McGill, age 11, who was delivering newspapers on Main Street directly across from the derailed cars. Heat from the burning wreckage caused burns on her hands and melted a nylon scarf she was wearing. She was taken to Iroquois Memorial Hospital in Watseka, where she became the first of more than 60 victims the hospital would treat that day.

At least 25 towns sent firefighters and equipment to help in Crescent City, and almost every one of the responding fire departments counted at least one of their members among the injured. Crescent City Fire Chief Orval Carlson suffered painful burns on his hands, but returned to duty, explaining, "My city, my job." Similar to Carlson, many of the firefighters went back to work after medical treatment, but others were serious enough to require hospital care.

Some of those most badly injured were victims of the second tank car explosion. Kankakee Fire Chief John Marquart, Kankakee Fire Lt. James West and Armand Korstick, chief photographer for the Daily Journal, all were less than a block away from the tank car when it exploded. They were thrown to the ground by the force of the blast and later hospitalized for treatment of burns, cuts and bruises.

Korstick, who was closest to the explosion, initially was believed to have been killed. He survived, however, by crawling into the shell of the tank car that had exploded right after the derailment. "I crawled in behind the tank, and it gave me protection," he later recalled. "I could feel fire — the fire was just like a blowtorch going right by me and over my head and I was being protected by this tank."

While being driven to Watseka for medical treatment, he remembered looking back toward Crescent City just as another of the tank cars exploded.

"It actually looked like an atomic bomb," Korstick told a reporter. "This thing mushroomed. This was black as can be, but the whole center was red as it could be. It went up 10, 12 stories in the air."

The derailment and explosions left a significant number of Crescent City's 600 citizens homeless; more than 50 buildings in the town were declared "uninhabitable." By late Sunday, the debris was being cleared away, and relief efforts were underway to feed and house the victims.

Jack Klasey came to Kankakee County as a young Journal reporter in 1963, and quickly became hooked on local history. In 1968, he co-authored “Of the People: A Popular History of Kankakee County.” Now retired from a career in the publishing industry, he remains active in the history field as a volunteer and board member at the Kankakee County Museum. He can be contacted at jwklasey@comcast.net.