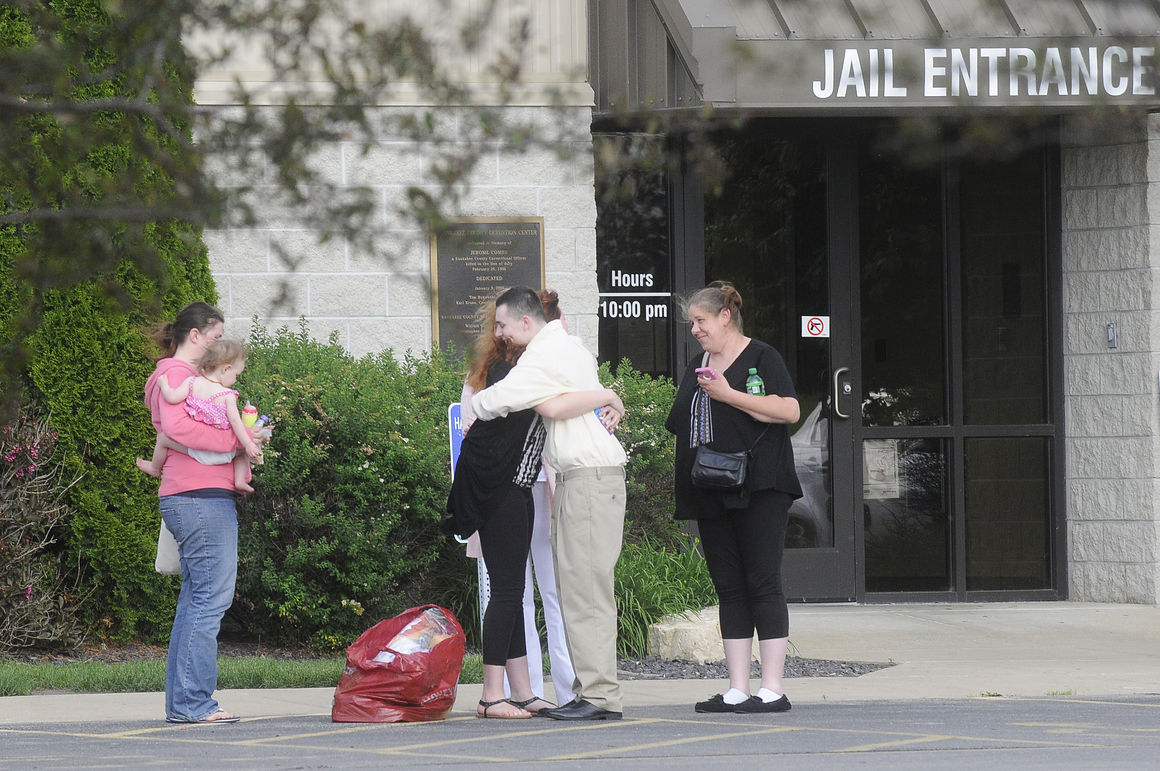 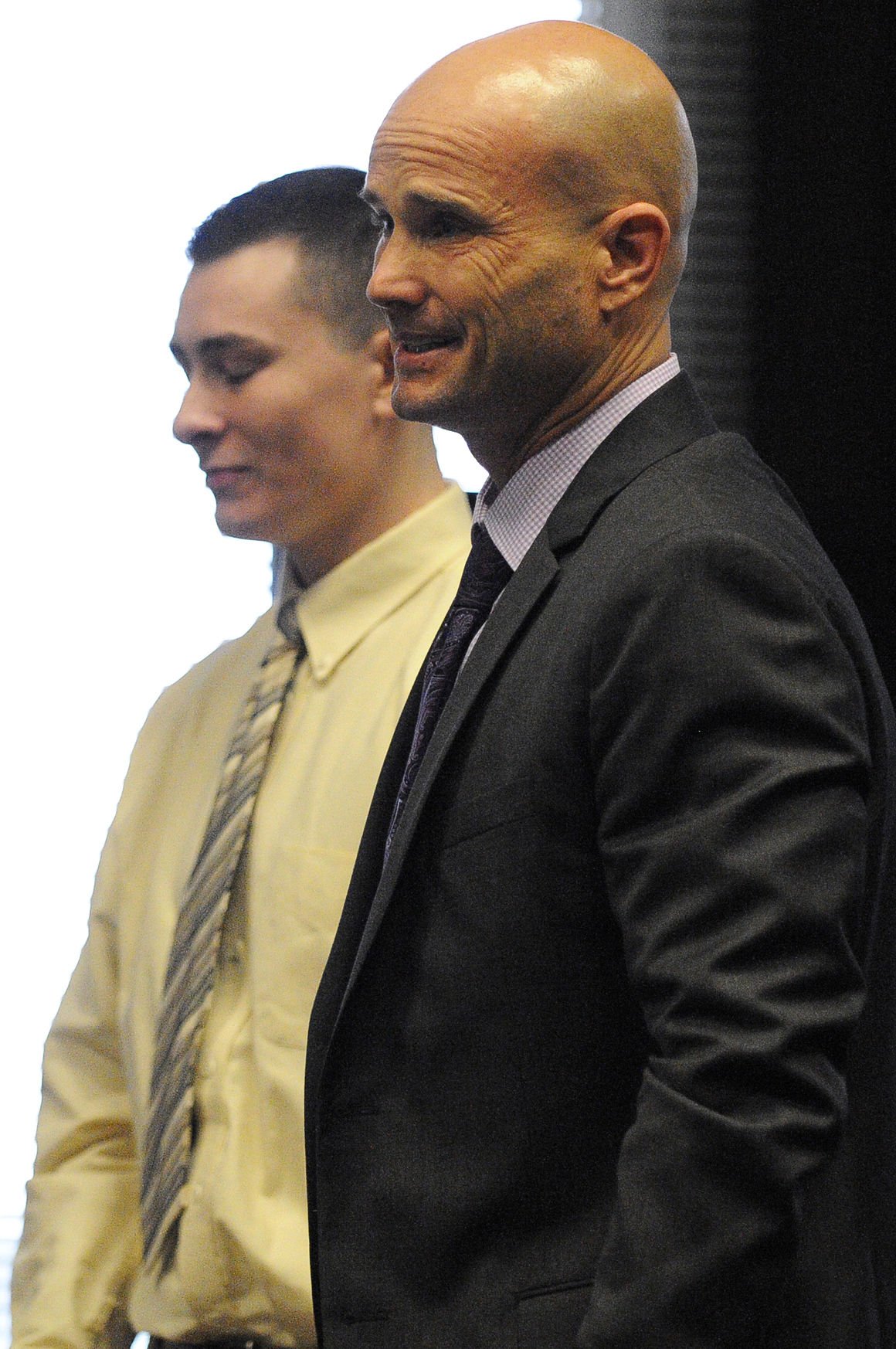 Attorney Robert J. Callahan, right, and his client Cody Stilwell, on trial for first-degree murder, react after a not-guilty verdict was read Friday in the Kankakee County Courthouse. 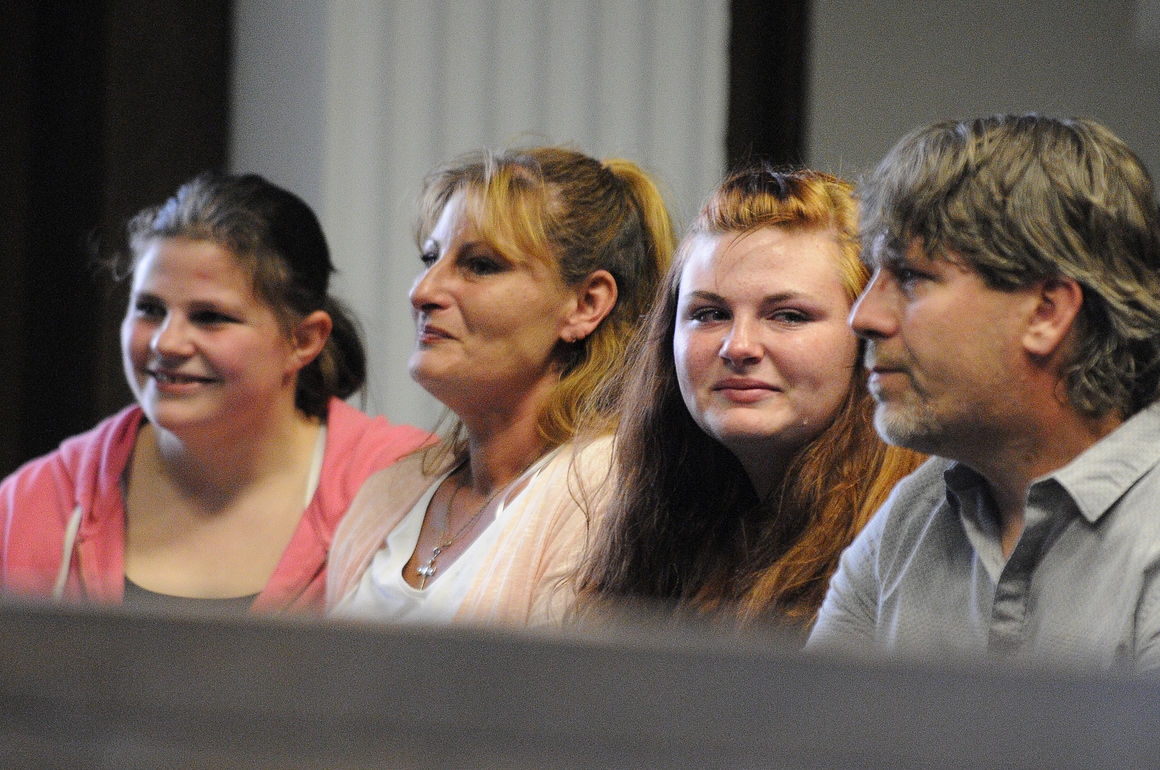 Sitting among family, Sandra Martin, second from left, reacts after a not-guilty verdict was read for her son Cody Stilwell, on trial for first degree murder, Friday in the Kankakee County Courthouse.

Attorney Robert J. Callahan, right, and his client Cody Stilwell, on trial for first-degree murder, react after a not-guilty verdict was read Friday in the Kankakee County Courthouse.

Sitting among family, Sandra Martin, second from left, reacts after a not-guilty verdict was read for her son Cody Stilwell, on trial for first degree murder, Friday in the Kankakee County Courthouse.

Cody Stilwell, the 21-year-old man accused of stabbing his ex-girlfriend's stepfather in 2014, was acquitted on Friday almost 25 months to the day after he was first arrested. The jury took less than three hours to come back with the not guilty verdict.

Stilwell was shackled and led out of the courtroom, showing little emotion as if in disbelief that he was going to spend the Memorial Day weekend at home with his family.

A family member of David Kennett II, whom Stilwell stabbed — he said it was in self-defense — began sobbing and needed help out of the courtroom. Tears were also shed on Stillwell's behalf.

The prosecution spent most of the week trying to convince the jury that Stilwell went to the home of his ex-girlfriend, Anna Senesac, in the Burch's Mobile Home Community looking for a fight. He was angry at Senesac and her new boyfriend, they contended.

According to video of the police interrogation, which was played in court this week, Stilwell told police that the knife he used to stab Kennett belonged to Stilwell's stepfather and was inside the car he used to drive to the mobile home park.

"I didn't kill him. Her father is not dead. That didn't happen. There is no way he is dead. I was just getting punched and getting kicked."

What sunk the prosecutor's case was what several jurors called inconsistencies in the witness testimony. It wasn't clear, for example, whether Senesac was even a witness to the fight that occurred between Stilwell and Senesac's boyfriend, Montell Billips, and his brother, Marshall.

Kennett, his wife, Deborah, said on the stand, was only trying to break up the fight. But no one actually saw Stilwell stab Kennett.

"We didn't know who to believe," one juror said.

Another juror said many of the witnesses didn't seem credible.

"Good facts make a good lawyer, and we had the facts," said Robert J. Callahan, Stilwell's attorney. "(Prosecuting attorneys) Bill (Dickenson) and Ed (Pentuic) did an excellent job with what they had to work with."

More hazy was the status of Stilwell's relationship with Senesac at the time of the stabbing. Text messages between the two show that they may have been on the mend.

But on the stand as a witness for the state, Senesac at times became combative with Callahan.

He asked about Senesac's whereabouts during the fight. She said she was coming home from visiting a friend and saw what happened.

"I was there, thank you very much," Senesac said

Callahan fired back, "You're welcome."

When he told her to take time to compose herself, Senesac replied, "I don't need time. Just get over with it."