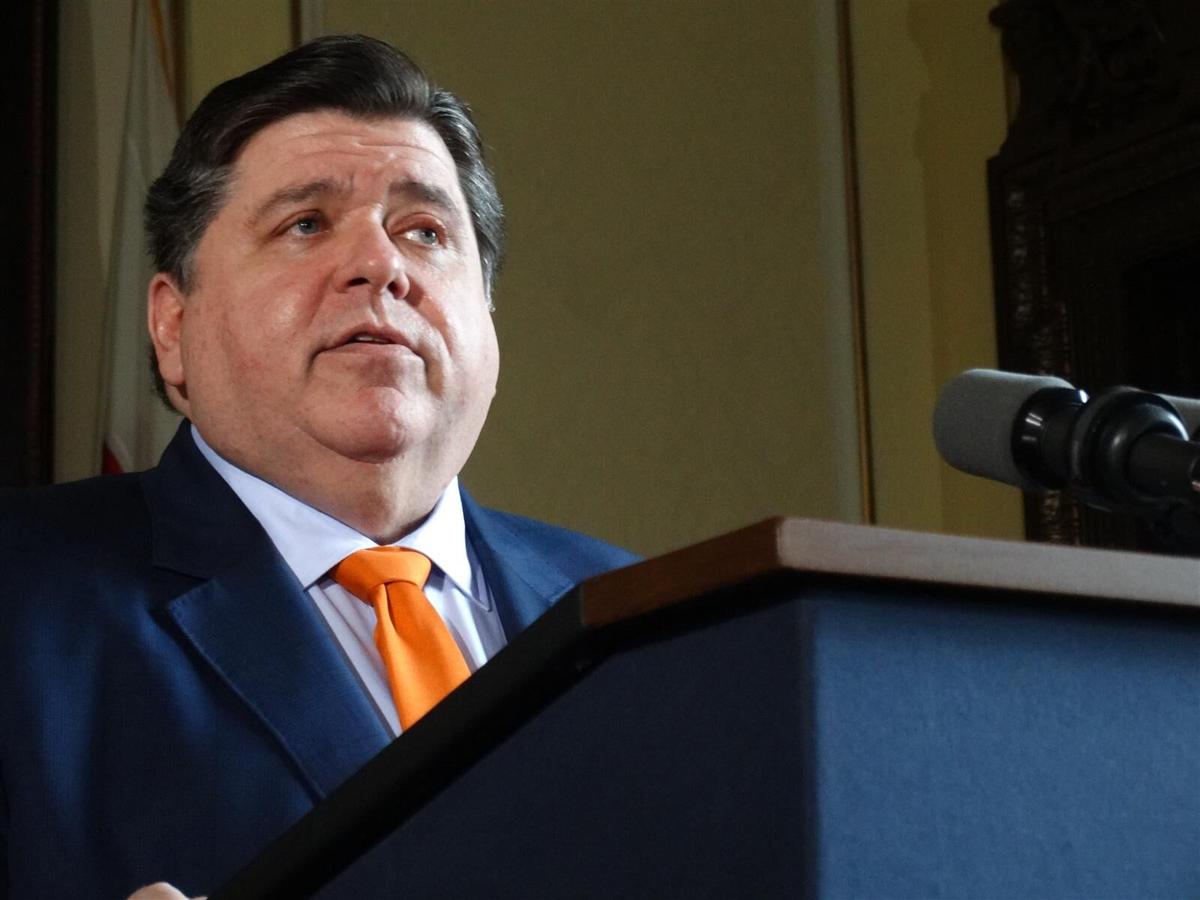 Gov. JB Pritzker and state officials are seeking ways of dealing with huge deficits to the state’s Unemployment Insurance Trust Fund as its deficit could rise to $5 billion. 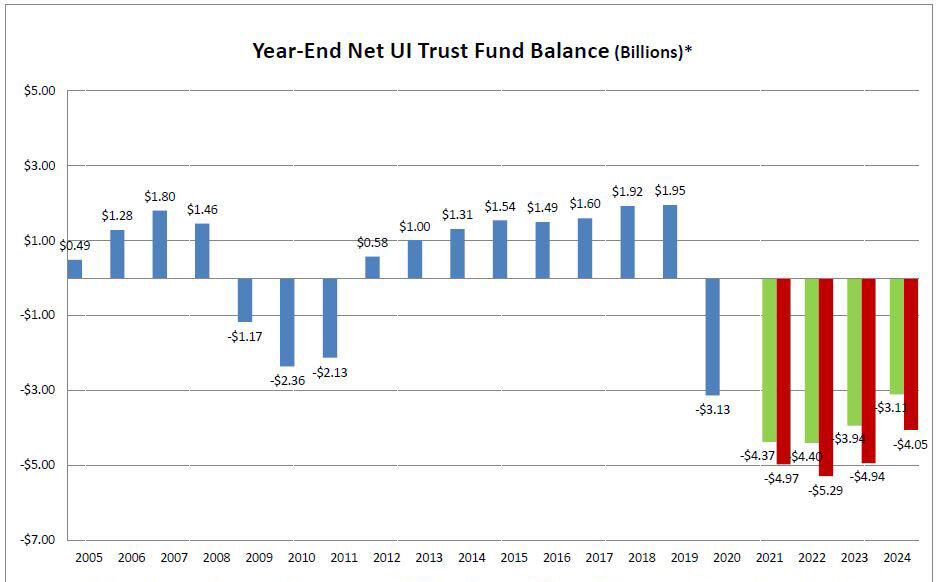 An image from the Illinois Department of Employment Security shows the anticipated fund balance of the Unemployment Insurance Trust Fund as of June 2012.

Gov. JB Pritzker and state officials are seeking ways of dealing with huge deficits to the state’s Unemployment Insurance Trust Fund as its deficit could rise to $5 billion.

An image from the Illinois Department of Employment Security shows the anticipated fund balance of the Unemployment Insurance Trust Fund as of June 2012.

In Illinois, that’s led to a deficit in the Unemployment Insurance Trust Fund — or the pool of money used to sustain the social safety net — that could rise to $5 billion.

Stakeholders from both political parties, as well as business and labor groups, are now warning of “crippling” tax increases on businesses and cuts to unemployment benefits that could result if the ongoing deficit goes unaddressed for too long.

But even as the deficit continues to grow amid still-high unemployment rates, state lawmakers have not set a clear path forward for digging out of the historic hole.

“I think a larger discussion has to begin sooner rather than later, but we’re kind of waiting on, you know, getting a total handle on the size of the problem,” Rep. Jay Hoffman, a Swansea Democrat and assistant majority leader who is a lead House negotiator on unemployment insurance issues, said in a phone interview.

Meanwhile, the state also faces looming interest payments that are likely to cost tens of millions of dollars annually on more than $4 billion of federal borrowing undertaken to pay out benefits at the height of the pandemic.

Lawmakers and stakeholders reached by Capitol News Illinois said they were hopeful for another round of federal aid, this time targeted to shore up trust funds nationwide. Failing that, members of both parties believe the state should use a large portion of its remaining federal American Rescue Plan Act funds — a sum of more than $5 billion of the $8.1 billion allocated to the state — to address the deficit.

Each state has an Unemployment Insurance Trust Fund account maintained by the U.S. Treasury but funded by the state’s businesses through insurance premiums collected via payroll taxes. The rates at which businesses pay into Illinois’ fund are determined by a complex statutory formula, based on unemployment rates, the solvency of the Trust Fund, employer experience, number of employees and other factors.

Normally, the incoming funds outpace the amount of outgoing unemployment benefits, but as the state’s unemployment rate grew as high as an unprecedented 16 percent in April 2020 amid forced economic shutdowns, those trends drastically reversed.

When this happens, states can borrow from the federal government in what is called a Title XII advance to pay unemployment claims. As of July 7, Illinois’ outstanding balance for federal Title XII borrowing was $4.2 billion, according to the U.S Treasury, but that number is expected to grow this year as the unemployment rate remains high, most recently measuring at 7.1 percent in May 2021.

By the end of 2021, according to the Illinois Department of Employment Security, the deficit is expected to grow to somewhere between $4.37 billion in an expected trajectory to $4.97 billion in a pessimistic scenario. At its current pace, the department projects the deficit would continue to grow into 2022, increasing to somewhere between $4.4 billion and $5.29 billion before it begins to slowly taper off.

As of July 7, Illinois was one of 17 states with a trust fund deficit, and the collective national deficit exceeded $54 billion. California had the largest hole at more than $22 billion, followed by New York at more than $9.8 billion, Texas at $6.9 billion, Massachusetts at more than $2.2 billion, four states over $1 billion and the rest below that amount.

While federal lawmakers passed a moratorium on Title XII interest payments in previous COVID-19 relief packages, it is scheduled to expire on Sept. 6, at which point interest will begin to accrue at a rate of 2.27 percent. According to IDES, the state has allocated $10 million for interest payments in the current fiscal year, the first of which will be due Sept. 30.

Business groups have projected the interest payment could be as high as $14 million for the four-month period in 2021 after the moratorium ends, and about $50 to $60 million annually thereafter while the deficit remains.

When deficits reach such a mass, options for paring them down include an increase to the tax rate for employers, a reduction in unemployment benefits, an addition of other state, federal or private sector funds, or some combination of those efforts.

If any state maintains an outstanding balance of federal borrowing for too long, federal law stipulates that Federal Unemployment Tax Act credits for businesses would decrease incrementally, eventually increasing an employer’s tax burden from about 0.6 percent to 6 percent. But no states are in danger of a reduction to that credit in 2021.

Illinois law, however, builds “speed bumps” into the repayment process which encourage labor and business interests to come to the negotiating table to address deficits in a timely manner. Those “speed bumps” initiate penalties that, beginning in 2022, would include shortening the benefit period from 26 to 24 weeks, lowering wage repayment for claimants from 47 percent to 42.4 percent, and an increase to the formulaic employer tax rates, according to IDES.

Rob Karr, CEO and president of the Illinois Retail Merchants Association, estimated that the “speed bumps” would essentially raise taxes by $500 million on employers and cut $500 million in unemployment benefits.

Karr said IRMA joined other business and labor organizations in submitting a letter to Illinois’ congressional delegation to encourage further federal aid, but there’s no timeline yet as to when, or if, such aid would be coming.

But the simplest solution to avoid those penalties, Karr said, is to dedicate a large portion of the state’s remaining $5-plus billion in American Rescue Plan Act funding – a measure signed into law by President Joe Biden earlier this year to stimulate state economies amid the pandemic’s toll – to paying down the deficit.

State Sen. Chapin Rose, a Mahomet Republican who spoke against this fiscal year’s budget at the end of May due in large part to its failure to address the Trust Fund deficit, warned of drastic economic repercussions if the “speed bumps” take effect.

“If you’re a restaurant trying to reopen after COVID and you’ve been closed, and you’re just now getting your feet back under you and suddenly you get hit with this smack-down penalty, well, you know, that’s less employees you can rehire, it’s less new employees that you could hire, or maybe you just don’t reopen at all,” he said. “Or that cost gets passed along to the consumer.”

Labor interests will be in on negotiations to address the deficit as well. Pat Devaney, secretary treasurer at the Illinois AFL-CIO federation of labor unions, said unions will work to limit the burden on those claiming benefits, but he also noted some other form of state or federal funding would be needed to shore up the Trust Fund.

“I think everybody agrees, whether you’re on the employer side or the employee side, that given the current deficit, it’s going to be near impossible to cut your way or to raise employer taxes to resolve the existing level of deficit,” he said.