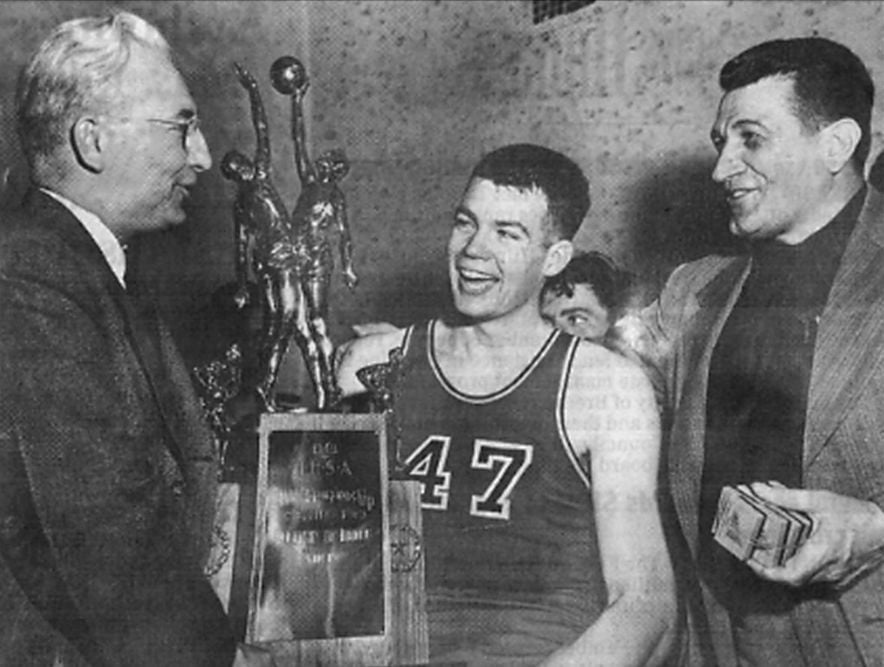 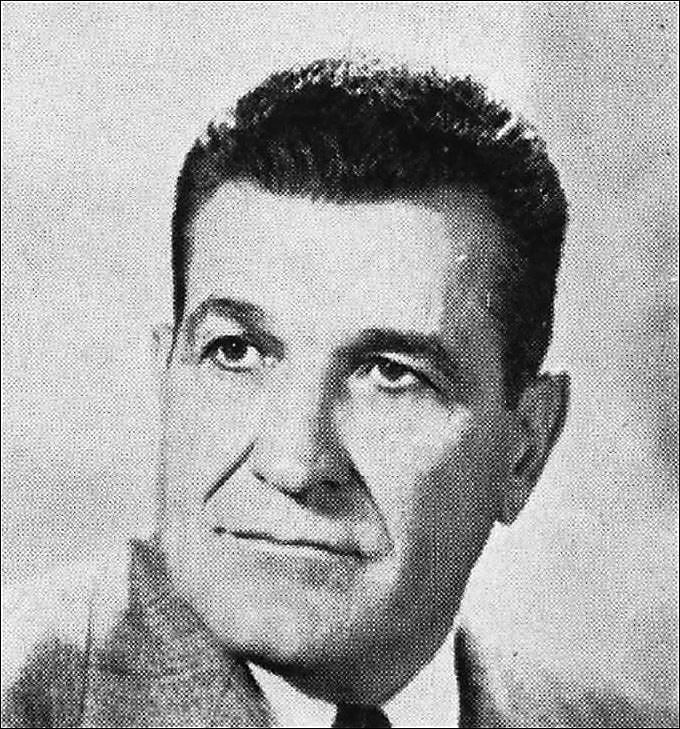 Stanley A. Changnon, born in St. Anne, became one of the state’s most successful high school basketball coaches in the 1940s and 1950s. 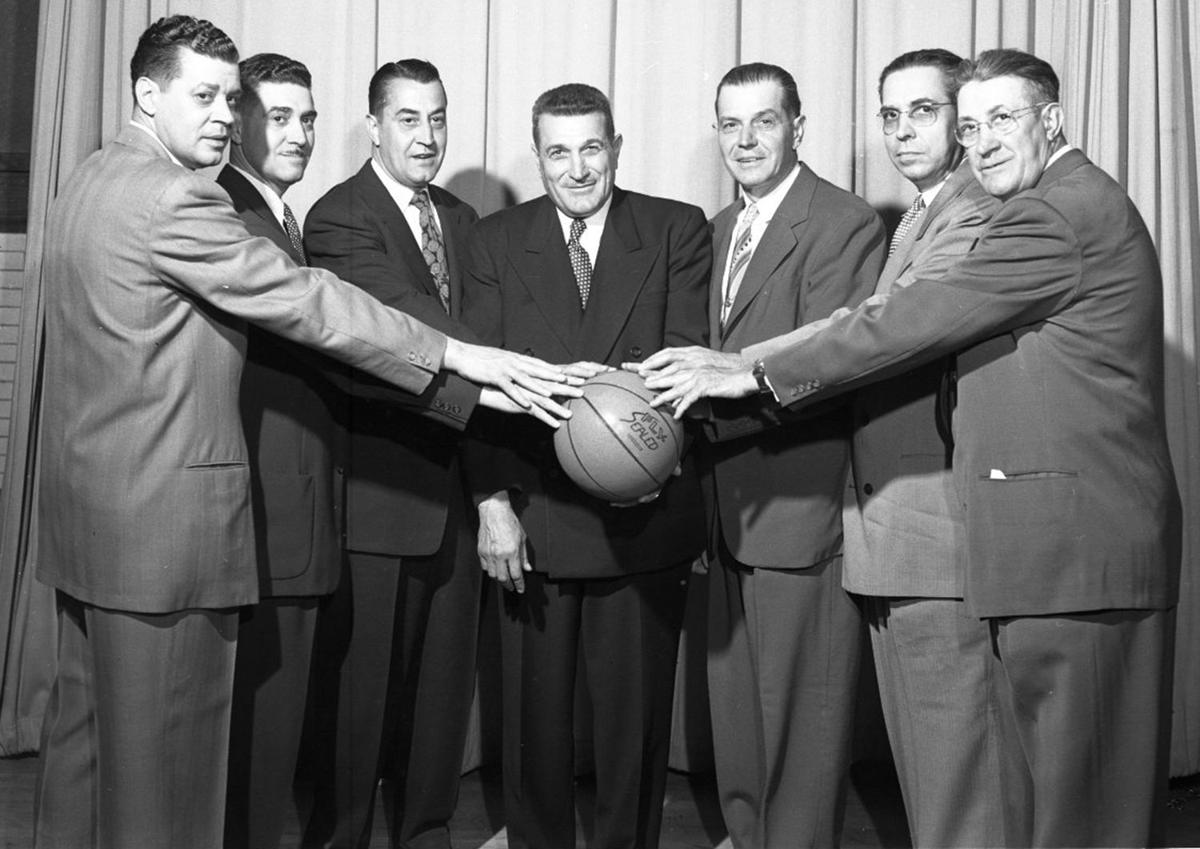 The seven Changnon brothers, photographed at a reunion in 1952, formed a basketball team in 1920 and competed against other “brothers” teams in the Midwest until 1933. Stanley Changnon (in dark suit at center), played basketball and football at Illinois State University. He went on to coach basketball at four different high schools in a career spanning more than a quarter century.

Stanley A. Changnon, born in St. Anne, became one of the state’s most successful high school basketball coaches in the 1940s and 1950s.

The seven Changnon brothers, photographed at a reunion in 1952, formed a basketball team in 1920 and competed against other “brothers” teams in the Midwest until 1933. Stanley Changnon (in dark suit at center), played basketball and football at Illinois State University. He went on to coach basketball at four different high schools in a career spanning more than a quarter century.

“We went up there to bring home the bacon, and we brought the whole hog back,” coach Stanley Changnon told a jubilant overflow crowd in the Mount Vernon Township High School gymnasium following the March 1950, Illinois High School Association State Basketball Championship game.

Changnon’s Mount Vernon Rams had just capped an undefeated season with an 85-61 blowout of Danville, the state’s second-ranked team. Mount Vernon also had captured the state title in 1949, making Changnon the first coach in Illinois high school basketball history to win back-to-back state titles (Elgin High School had won in 1924 and 1925, but under two different coaches).

After graduating in 1926 from Illinois State University — where he lettered in five varsity sports (football, basketball, baseball, tennis and track and field) in a single year — he took a teaching and coaching position in the tiny Iroquois County town of Donovan.

One advantage of the Donovan job was that it was only 11 miles (as the crow flies) southeast of Changnon’s home town of St. Anne, in Kankakee County.

The future Illinois Basketball Association Hall of Fame coach was born there on Sept. 10, 1895. He was one of 12 children — seven sons and five daughters — of St. Anne Village Marshal Alcide Changnon.

For the next 13 years, the team would dominate play against other “brothers” teams across the Midwest. According to local lore, the Changnon team never lost a game.

After a half-dozen years at Donovan, Stanley relocated to southern Illinois to coach at Johnston City, a coal-mining town in Williamson County.

He would spend the rest of his coaching career in Southern Illinois. Following a two-year stint at Johnston City, Changnon made a short journey northward to adjoining Franklin County, where he became head basketball and football coach at West Frankfort High School.

In 1943, Changnon moved northward again, this time a 33-mile trek to Mount Vernon High School in Jefferson County. Once again, he coached both basketball and football, although his greatest triumphs would come on the court rather than the field. Between 1943 and his 1953 retirement as basketball coach at Mount Vernon, his teams compiled a 230-59 record — an average of 26 wins per season.

After the team’s 1949 tournament victory over Hillsboro, coach Changnon sought a way to motivate the squad to repeat.

He booked Chicago Daily News Sports Editor John Carmichael as the speaker for the team’s sports banquet, and asked him to issue a challenge. Carmichael did so, telling the young players, “A real champion is not a champion unless they repeat. That is the test of a real champion, if you can come back and win again.”

The boys took up the challenge, “spending the summer of 1949 in the gym pushing themselves, preparing for the next season,” the Mount Vernon newspaper reported. They roared into the 1950 season, setting a 33-0 record, scoring a historic 293 points in the state finals, and registering the most points (85) scored in a title game up to that time.

Changnon was noted for his low-key coaching style.

“You didn’t see him showing a lot of emotions, jumping up and hollering,” recalled retired West Frankfort School Superintendent Goebel Patton. “I asked him one time about his coaching style and he said, ‘If I teach them all week and they don’t know what they’re supposed to do when the game starts, I can’t change things then.’”

After retiring from coaching, Changnon continued as the school’s athletic director for another decade. When he died in 1981, his body was cremated and the ashes scattered (at his request) on the Mount Vernon and West Frankfort football fields.

His grandson, Marc, who helped to scatter the ashes, said Changnon “loved high school sports so much that he wanted a football field to be his eternal resting place … it was … where he had some of the greatest joys in his life.”

Another member of the Changnon family achieved fame in a field far different from sports. Who was he, and what was his field?

Answer: Stanley Changnon Jr., the coach’s elder son, was an internationally renowned scientist in the field of climatology. When an asthmatic condition prevented him from participating in athletics as a young man, he turned to science. He was head of the Illinois State Water Survey for many years, and was a professor at the University of Illinois. Changnon authored eight scientific books and more than 400 scientific papers on climate change and related topics. He died in 2012.