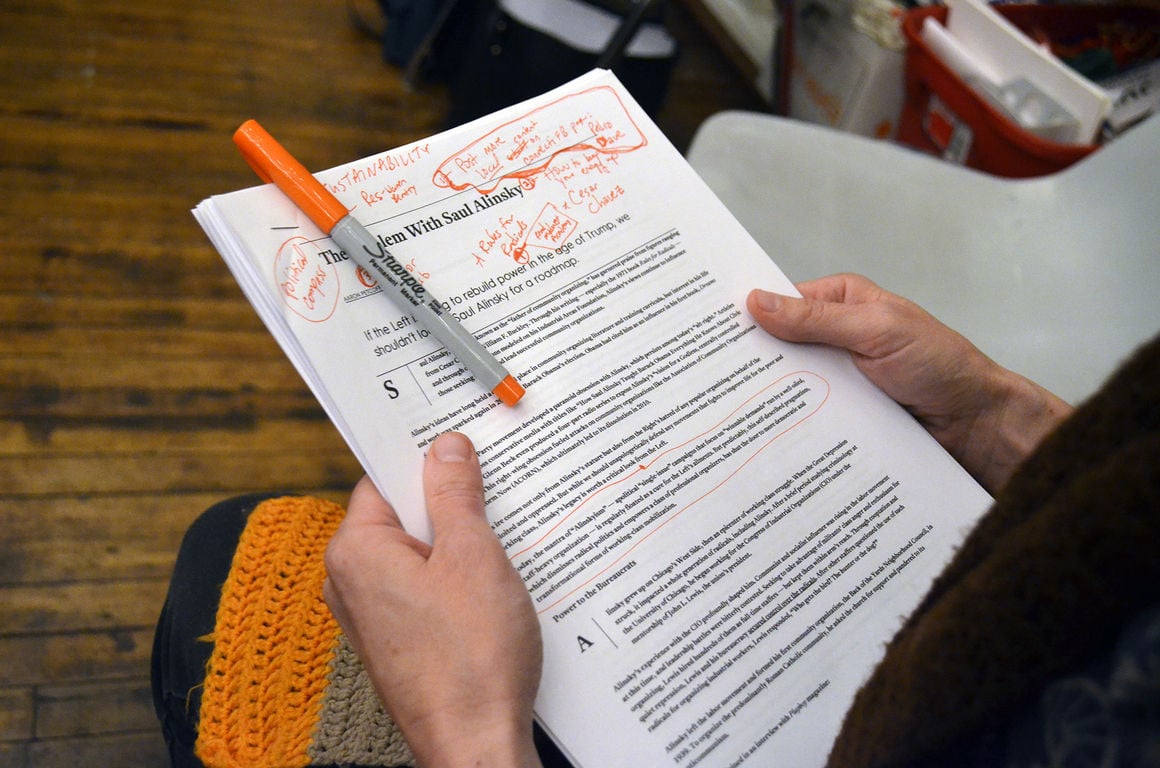 One of the members reviews her notes during a recent meeting of the Jacobin Reading Group for the South Suburbs. The group meets monthly at Feed Arts & Cultural Center in downtown Kankakee reads and discusses four or five articles each month, selected from Jacobin Magazine. The next meeting will be from 7 to 8 p.m. Nov. 15. 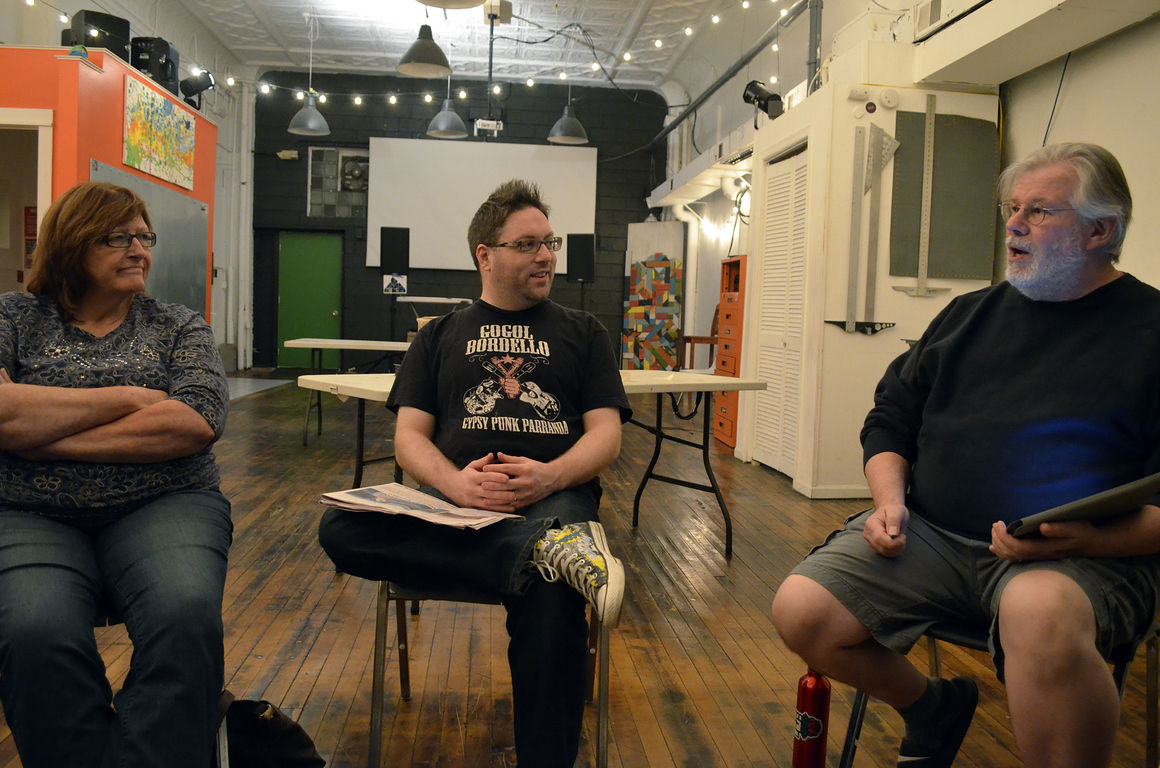 Debbie Blomer and Daniel Aumiller listen as Brian Noe opens the discussion. True to the political spirit of the group, Noe facilitates meetings, but topics are chosen by everyone.

One of the members reviews her notes during a recent meeting of the Jacobin Reading Group for the South Suburbs. The group meets monthly at Feed Arts & Cultural Center in downtown Kankakee reads and discusses four or five articles each month, selected from Jacobin Magazine. The next meeting will be from 7 to 8 p.m. Nov. 15.

Debbie Blomer and Daniel Aumiller listen as Brian Noe opens the discussion. True to the political spirit of the group, Noe facilitates meetings, but topics are chosen by everyone.

Whether it left you thrilled or heartbroken, most of us agree the 2016 presidential election had a profound effect on our political landscape.

Among those effects? The Democratic Socialists of America, the largest socialist organization in the U.S., has grown exponentially since the election of Donald Trump and now has about 30,000 members nationwide. Here, in Kankakee County, Jacobin Reading Group for the South Suburbs meets to discuss articles from Jacobin, the leading magazine of the far left, and to talk about what comes next.

While the county went solidly in favor of Trump, there's a core group of six or seven people at all the meetings, with another dozen who drop in occasionally. Many of the reading group members also belong to Connect Kankakee, an organizing group that aims "to promote, nurture and defend cultural and ethnic diversity in the Kankakee area." Events put on by Connect, such as this August's National Weekend of Solidarity against Hate, have had more than 70 attendees.

"I want to push back on the notion that Kankakee County is a conservative county," said Brian Noe, who started the reading group. "It seems like a no-brainer; and if you look at election results or letters to the editor, I understand that somebody would be given to think that. If you look deeper, even at the election results, about one in five Kankakee residents voted for Donald Trump. It's true he got 53 percent of the vote here, but that was of the people who bothered to turn out to vote."

When Noe started the group two years ago, he had three goals in mind. First, he wanted to give people a chance to explore socialist ideas without having to commit themselves to anything; second, help people deepen their understanding of current events; and finally, to understand the history of collective organization.

While we might picture Soviet Russia or the Red Scare of the 1950s, the dictionary definition of socialism is "any of various economic and political theories advocating collective or governmental ownership and administration of the means of production and distribution of goods." It's a compelling idea for many, as recent college graduates leave school with an average of $37,172 in debt, national campaigns continue to push for increased minimum wage and a third of Americans support universal health care.

"Nowadays, people are questioning capitalism," said Julia McDonald, who joined the reading group a few months ago to explore her political options. "There's a big chunk of millennials who are looking at their lives and the way their lives are unfolding in today's climate. Bernie Sanders came in and talked about socialism, and just opened that conversation up again, and people are listening again, because they recognize there's something wrong with what's happening now."

Perhaps even more than Trump, the Sanders presidential campaign serves as the backdrop for many of the conversations in the reading group. His grassroots style of campaign, focusing on popular support and small donations from a wider crowd of supporters, showed that a ground-up socialist movement stood a chance.

"I don't think the national political parties are doing very much to help us right now. I believe this is something; if we want to change America, we need to do it from the ground up. That's something the Republicans have been working on since the tea party movement in 2010. We have to get on board with that," said Daniel Aumiller, one of the reading group members, who considers himself more a Democrat than a socialist.

Sanders also raised the question of whether it was worthwhile to push for change through elections, especially as people on both sides of the political divide believe he was pushed out of the primary by more traditional Democrats. There's a divide in the Jacobin Reading Group, between those who still believe in the power of their votes and those with less faith in the political system. One thing they can all agree on though: the importance of reaching out to people and having difficult conversations.

"I find that if you talk issues with people they – Republican, Democrat, whatever – so many of the issues I believe in, they believe in. We get caught up in labels and these things prevent people from coming together to talk about the things that matter to us," said Debbie Blomer, one of the group's members.

The statistics back up Blomer's theory. An increasing number of studies find that, when partisan language is removed from a survey question, we tend to agree with each other more than we think. In one example, a recent poll series by the University of Massachusetts-Lowell's Center for Public Opinion asked the same question three ways. First, they asked participants if a controversial group that held a rally where members chanted derogatory terms should be allowed to hold more events in the future. Seventy-three percent of Democrats and 54 percent of the Republicans surveyed in the control group said yes.

Whether the solution comes through grassroots campaigns or the electoral process, outreach is the first step toward realizing what we have in common; for that reason, the Jacobin reading group has an open door policy for anyone with a willingness to learn.

"People are trying to find some sense of comfort and belonging and know that they're not alone," Noe said. "It's easy to feel very isolated even though that shouldn't be the case."

The Jacobin Reading Group for the South Suburbs meets on the third Wednesday of each month at 7 p.m. at 259 S. Schuyler Ave., home of the Feed Arts Center, which isn't associated with the group but allows members to use the space. Everyone who wants to learn and discuss is welcome, regardless of political affiliation. Learn more at southlandreading.wordpress.com or in the Facebook group "Jacobin Reading Group Chicago Southland."