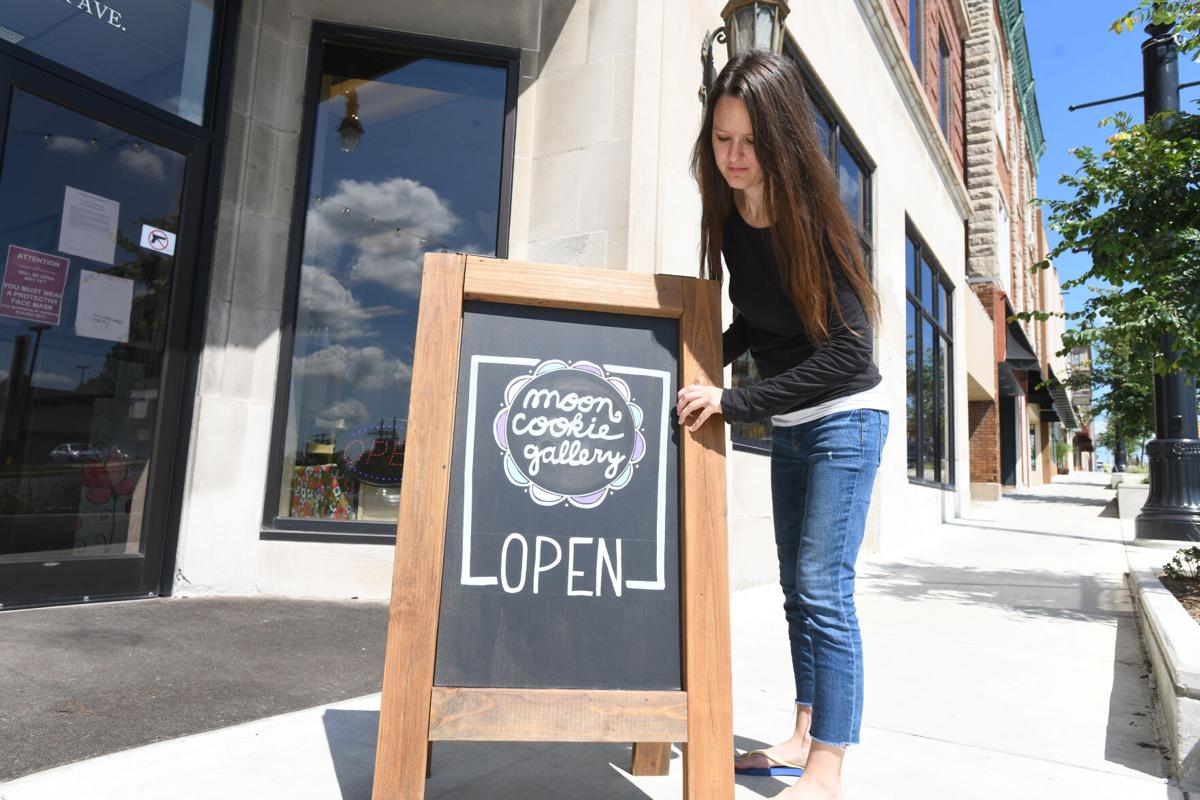 Moon Cookie Gallery owner Natalie Seaton sets up a handmade open sign outside her downtown business at 187 S. Schuyler Ave. in Kankakee last August. Seaton had to close for about two and a half months last spring, but her shop was able to survive, she said. 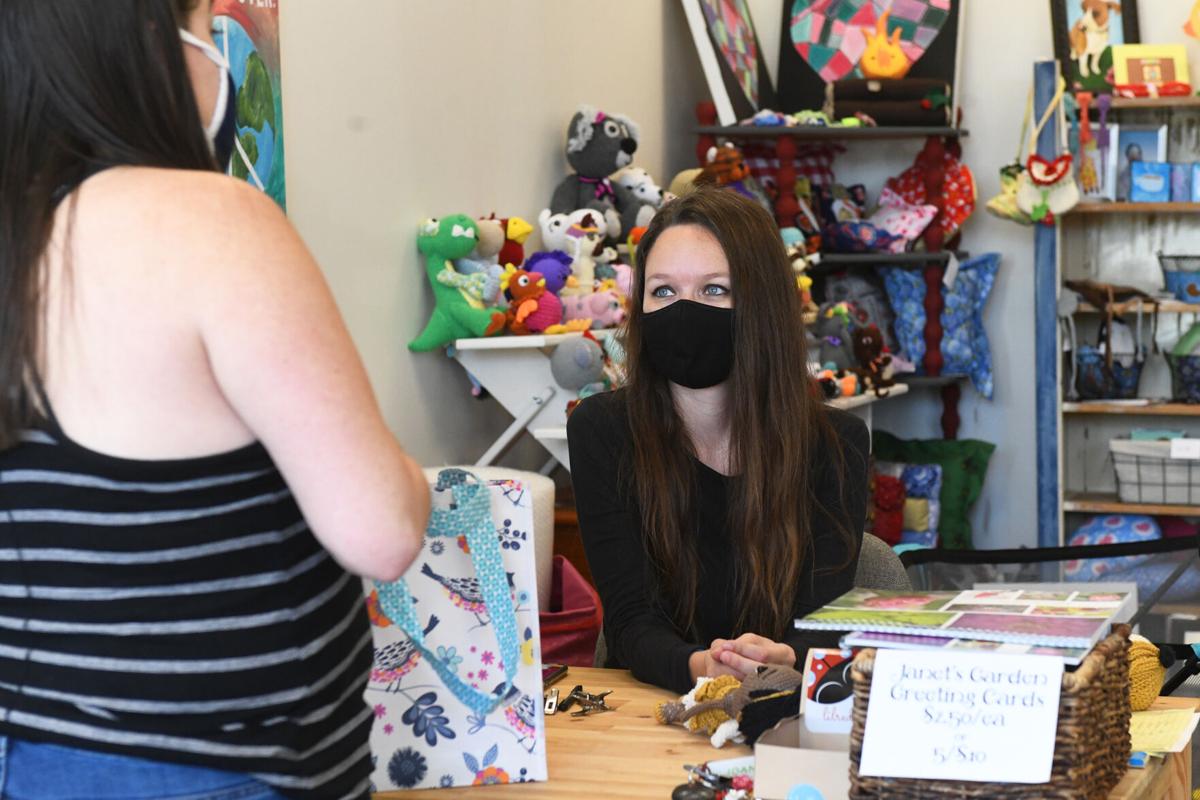 Natalie Seaton, owner of Moon Cookie Gallery in Kankakee, helps a customer last August at her downtown Kankakee business. Seaton said she had to close for about two and a half months last spring, but her resale shop was able to survive.

Moon Cookie Gallery owner Natalie Seaton sets up a handmade open sign outside her downtown business at 187 S. Schuyler Ave. in Kankakee last August. Seaton had to close for about two and a half months last spring, but her shop was able to survive, she said.

Natalie Seaton, owner of Moon Cookie Gallery in Kankakee, helps a customer last August at her downtown Kankakee business. Seaton said she had to close for about two and a half months last spring, but her resale shop was able to survive.

For the past year, small businesses have been faced with so many obstacles as the entire country has dealt with the COVID-19 pandemic and its mitigations.

That’s been the case with local small businesses as well. Some had to close for two to three months while finding creative ways to stay afloat. As the business climate is slowly trending in the positive direction, local establishments are hopeful for the future.

One business that remained open but still felt the brunt of the downturn was Roy Brothers Tire & Auto on South Schuyler Avenue in Kankakee.

“We were considered an essential business,” said owner Jim Roy, who said business was really slow a year ago.

“When they first shut down in March, there were hardly any cars going by, so if people aren’t driving their cars they sure don’t break down,” Roy said. “There was a noticeable difference. We did apply for the PPP, payroll protection program. The stipulation there was you could not lay off anybody. Whether we had business or not, we were here.”

Roy, who’s been in the auto repair business for 53 years, said activity picked up when the first round of stimulus checks were sent out by the U.S. Treasury Department.

“It sparked there, and now it’s just been kind of steady but not where it should be,” he said.

Roy is hopeful business will return to pre-pandemic levels.

“I think it’s going to come around because people are really tired of what’s going on, living the way they’re living,” he said. “Whether it’s because they got the shots or what, it’s hard to say.”

Natalie Seaton, owner of Moon Cookie Gallery in Kankakee, said she had to close for about two and a half months last spring, but her resale shop was able to survive.

“Honestly, we had real good local support so I don’t have room for complaints,” Seaton said. “I’m happy about that.”

She had to get creative as far as sales while her gallery was closed.

“We had curbside options, so I was able to take orders once a week from people who would email,” Seaton said. “Then I would bring their stuff to my house, and then they would pick it up. That seemed to work.”

Once restrictions were lifted and she was able to reopen her doors, the restlessness of customers spurred some uptick in business, she said.

“People were tired of being cooped up inside and were happy to come out and shop.”

“We were really small down there, so I struggled with other things because of parking,” she said. “We were only able to have 40 artists down there, and now we have like 60. So we have more artists here to show their stuff. In my situation, this was fine. It worked.”

She applied for a PPP loan but wasn’t approved.

“It was a little bit of a struggle,” Seaton said. “I wasn’t able to pay all my bills right away, but I think we’re on the right track now.”

Nearly all of her merchandise is sold on consignment, and she receives 25 percent of the sale. She runs the gallery by herself.

“It does take a little while to get to the point of paying my rent,” Seaton said. “It is my livelihood though, so I need to succeed.”

Moon Cookie Gallery will be celebrating its fifth anniversary in May, and Seaton is hopeful for the future.

“With the Farmers’ Market restarting at the end of April that always helps us,” she said. “We usually have workshops. … We just can’t do any of them. I don’t feel comfortable doing them until everyone is vaccinated, and we’re still really strict about masks here. I know that’s deterring some people from shopping. People don’t want to come out.”

Andaul Jewelers on William Latham Drive in Bourbonnais also withstood being closed for two months in 2020.

“That was tough, but we came through it OK,” said co-owner Paul Horstmann.

“It didn’t take off right away, but as soon as people found out we were open, they started coming in,” he said.

Horstmann said the 2020 holiday sales were down from the previous year, but it had a good February this year. Andaul saw a slight bump in sales when the first round of stimulus checks were received. He’s hopeful business could return to pre-pandemic levels.

“I think they’ll get back to normal,”Horstmann said.

Tim Nugent, president and CEO of the Economic Alliance of Kankakee County, said said some business sectors have been impacted more than others. While service industries bore the brunt, grocery and convenience stores have prospered during the pandemic.

“It seems like the hospitality industry got hurt more than some of the other industries, but it’s been a pretty trying year for everybody,” he said.

Nugent said his office is working on incentive packages that will help those businesses that have been affected the most.

“The last thing we want as a result of this is to have a bunch of empty storefronts,” he said.

Nugent is also mayor of Manteno, which has a good mixture of commercial, professional and service industries. He’d like to see that maintained.

“We’re looking at the possibility of being able to help some of those companies as we get reports of the income they’ve lost and see if there’s something we can make up,” he said. “We certainly like having our main street full.”

It has made $7.5 billion available for the program, and President Joe Biden announced changes to make access to PPP loans more equitable.

"The last thing we want as a result of this is to have a bunch of empty storefronts."

Tim Nugent, president and CEO of the Economic Alliance of Kankakee County

COVID-19 one year later: A year that changed everything

Though coronavirus came on the scene much earlier, it’s today that we mark its one-year anniversary. That’s because the first case was recorded in Kankakee County on March 19, 2020.

Admitted into Riverside Medical Center on March 30, 2020 — just shy of one year ago — Shaw spent the next 91 days there until being discharged on June 24.

COVID-19 one year later: restaurants, schools, vaccines and the future

The Daily Journal is publishing stories this weekend that look back on how Kankakee County's year of COVID-19 has changed education, dining, healthcare and more.