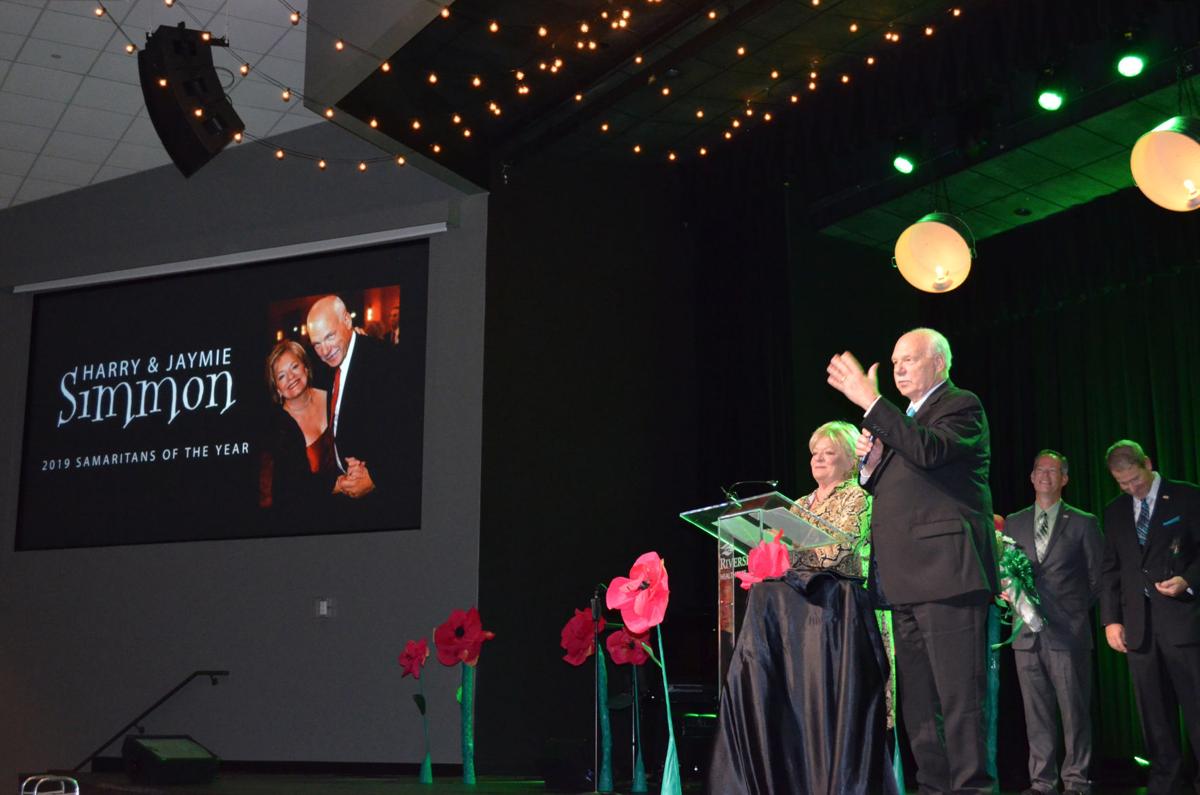 Jaymie and Harry Simmon accept the Samaritans of the Year Award presented by Riverside Healthcare Foundation. 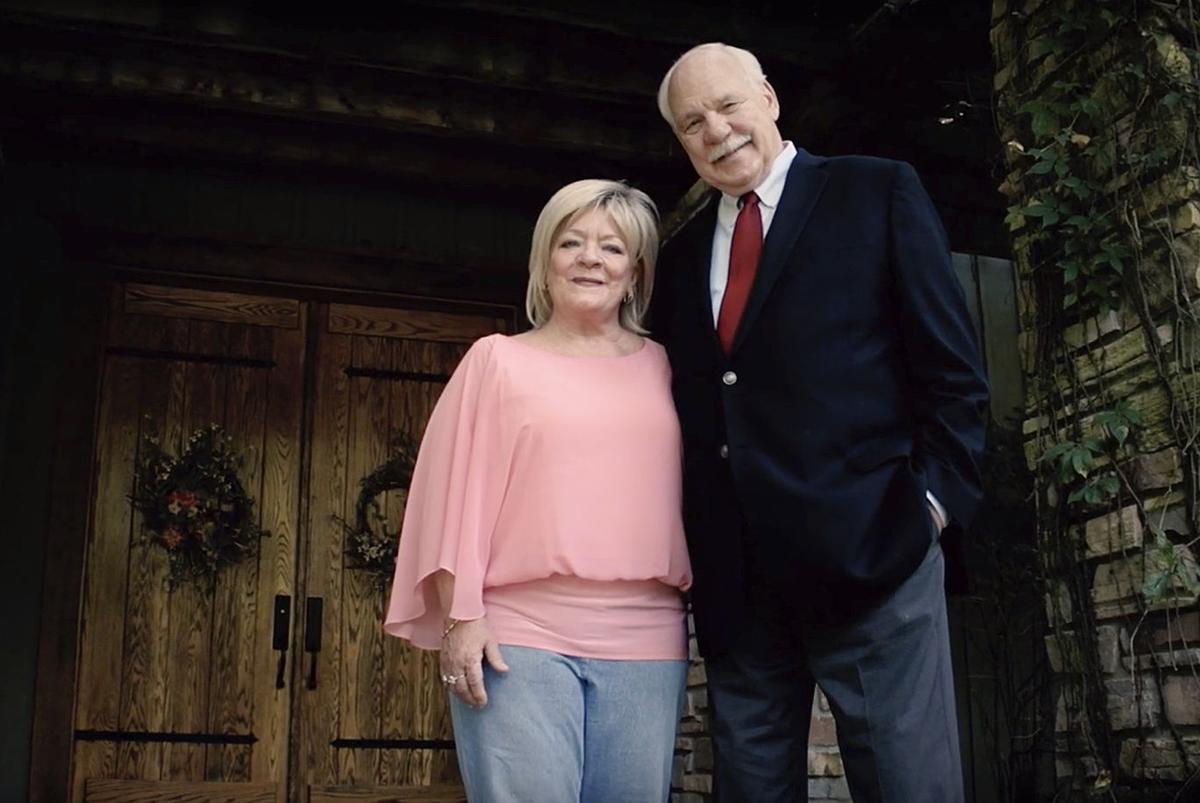 Jaymie and Harry Simmon are the latest recipients of the Samaritans of the Year Award presented by Riverside Healthcare Foundation. The couple can trace their association with Riverside back to the hospital’s earliest days. 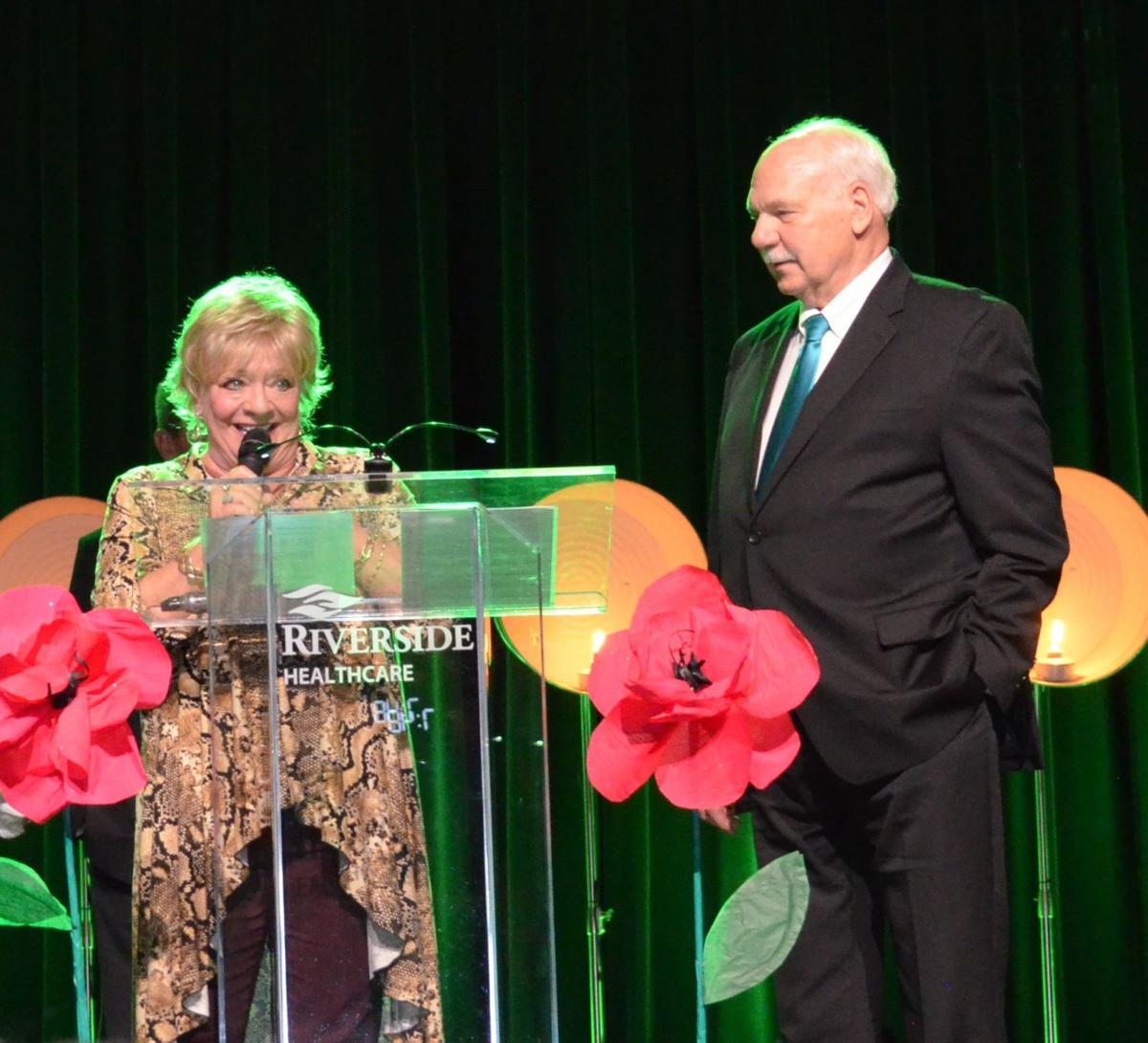 “I’m a little bit uncomfortable,” Jaymie Simmon said of being named Samaritans of the Year by Riverside Healthcare Foundation. “It’s difficult to talk about yourself, but I am grateful to be honored.” “The two ‘H’ words come to mind,” her husband, Harry, said of the achievement, “honored and humbled.” 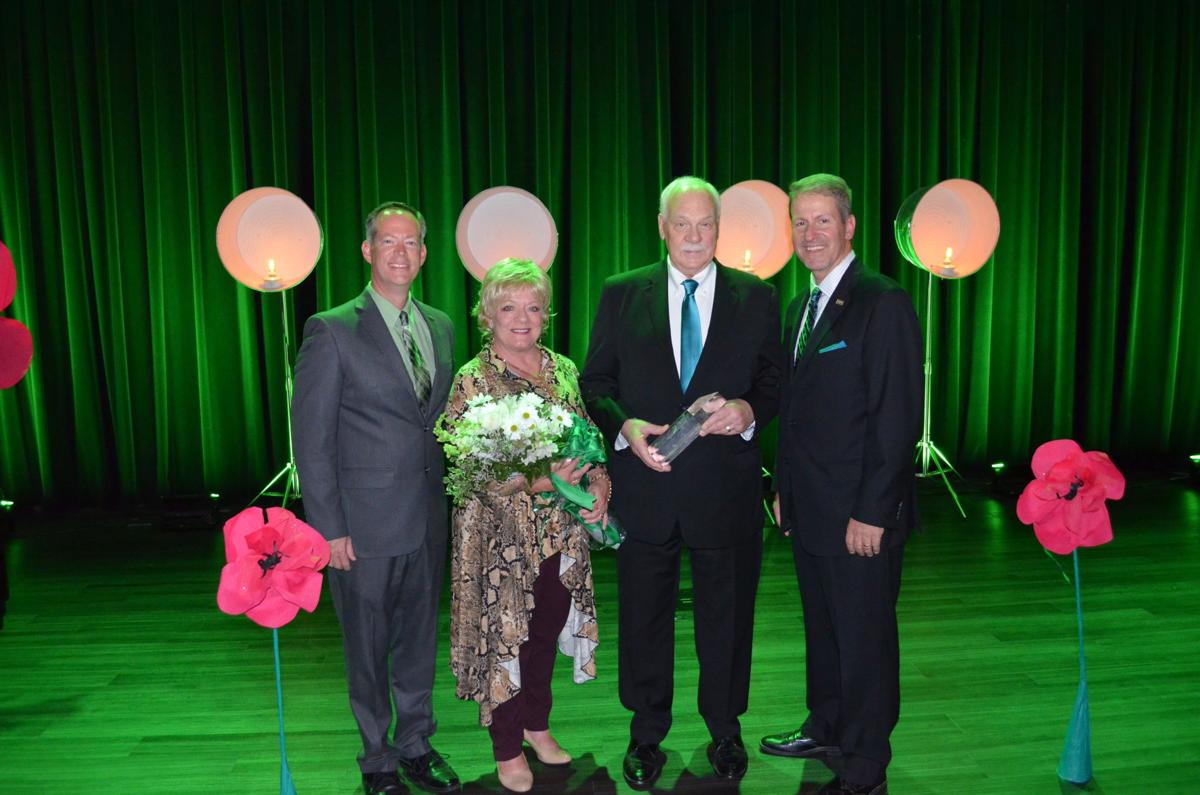 Jaymie and Harry Simmon accept the Samaritans of the Year Award presented by Riverside Healthcare Foundation.

Jaymie and Harry Simmon are the latest recipients of the Samaritans of the Year Award presented by Riverside Healthcare Foundation. The couple can trace their association with Riverside back to the hospital’s earliest days.

“I’m a little bit uncomfortable,” Jaymie Simmon said of being named Samaritans of the Year by Riverside Healthcare Foundation. “It’s difficult to talk about yourself, but I am grateful to be honored.” “The two ‘H’ words come to mind,” her husband, Harry, said of the achievement, “honored and humbled.”

The connection between the Simmon family and Riverside Medical Center starts at the beginning of the hospital.

The late Frank and Margie Strand, the parents of Jaymie Simmon, were one of the original fundraisers for Riverside in the 1960s. Riverside opened its doors Jan. 22, 1964. Years later, Jaymie would be a top employee of the hospital.

The Simmon connection continues today. Harry Simmon sits on six different Riverside committees. He chairs the Investment and Governance committees. He is the vice chair of the Medical Center Board of Directors, the Executive Committee and the Joint Conference Committee. Finally, he sits on the Finance Committee.

The Simmons have been named the Samaritans of the Year by Riverside Healthcare Foundation. The award is the highest honor the hospital gives for philanthropy. The Samaritan dinner, the 46th annual event, was recently held at Gathering Point Church in Bourbonnais.

“Harry and Jaymie Simmon have been involved with Riverside for as long as I can remember,” said Phil Kambic, Riverside’s president and CEO. “They are both key contributors, each in his and her own way. From chairing boards and committees, to fanning the flames of generosity, to establishing an endowed nursing scholarship — Harry and Jaymie have not only been generous and strategic contributors, they’ve inspired so many others to do the same.”

Both, too, were moved by the honor.

“I’ve been part of the selection process for some past recipients,” Jaymie said. “I have seen the thought that goes into this process.

“I’m a little bit uncomfortable,” she said. “It’s difficult to talk about yourself, but I am grateful to be honored.”

From 1985 to 1991, Jaymie worked at Riverside. She designed and implemented a community wellness program, served as director of health promotion and as junior vice president of marketing.

She managed the Wellness, Sports Medicine and Corporate Health departments and made frequent presentations on Riverside’s behalf at wellness events.

Beginning in 2005, she joined the Riverside Healthcare Foundation Board and served as its chair, playing a major role and speaking at Samaritan dinners, though she now is retired from all things Riverside.

In between the past of her parents and today, Harry and Jaymie Simmon have been involved in a wealth of activities, benefiting the community. The colorful careers include success in business, sailing a championship yacht, jug band musicians, an author, triathletes, overhauling the United Way and the not-to-be forgotten “Kankakee Valley Prime Time.”

The couple met on the campus of Northern Illinois University. Both were theater majors performing in Eugene Ionesco’s “Six Characters in Search of an Author.’’ Jaymie said she never understood it. On stage, they were stepfather and stepdaughter.

They wound up marrying at the end of her senior year at Northern Illinois. In their time at the university, both were named the college’s Student of the Year in successive years. Their son, Grant, would win the same award in 2000.

A graduate of Lyons Township High School, Harry was active in theater, a member of the National Honor Society and tenor sax in the band. Jaymie was the homecoming queen at Bradley-Bourbonnais Community High School. She literally founded girls tennis at the school, the first sport for girls at BBCHS.

After graduation, Harry was asked to join Stranco, where he was the seventh employee. He rose to become the CEO by 1989. As general manager, he oversaw $30 million in revenues and 125 employees.

He helped the firm make acquisitions, and also directed subsidiaries in the United Kingdom and Australia.

The firm was sold in 1997, and Harry went on to be president of Twinbrook Consulting, traveling to serve clients such as Siemens, Culligan and Honeywell.

In the 1990s, the Simmons were a force in the United Way of Kankakee County. They ran it as independent contractors, cutting costs and increasing revenues for the charities.

Harry was president when the United Way of Kankakee County had its first $1 million year. Jaymie was the first woman to be the board president of United Way. They both received the Ken Cote Lifetime Achievement award from the local United Way for their work.

From 1997 to 2000, SimmComm produced Kankakee Valley Prime Time, a send-up, but with a positive and humorous twist, of local news over cable television. Among their more memorable segments were “Hunting with the Alderman” after an alderman got into a controversy, and “Shakespearean Speakout,” poking fun at the Daily Journal’s then-groundbreaking free comment line.

“Kankakee was then in a slump,” Jaynie said.“And the only time we would make the television news was if something horrible happened.”

Prime Time brought different and positive news. They got a great reaction to the program.

Together the Simmons also had The Kankakee Jug Band from 1979 to 2004. He hooted into a jug. She ran her fingers up and down a washboard and played the banjo. They started the group as a fundraiser for the Grace Community United Methodist Church, but wound up playing almost every weekend for five years at Darling Nel’s, the establishment now known as City Tavern.

If you watch them perform, you can’t help but laugh. And Harry said that was the whole point.

They also, as a couple, appeared in the annual murder mystery, “Murder at the Grand Hotel” on Mackinac Island from 1996 to 2011.

Harry was interested in sailing, too, for 30 years. For 10 years, he raced in his boat Jug Band. The first two years out, the boat finished last in its division. Later, they would have three first and two seconds in the Cruising Division of 40 to 50 boats. The Simmons sold the boat in 2015.

Both also had educational and literary pursuits in midlife. In his 50s, Harry earned a master’s degree from the University of Chicago.

“When he’s done, I’ll sign up,” Jaymie thought. She never did sign up, but she wrote “The God Gene,” a winner of the National Indie Excellence Award for literary fiction.

They are the parents of two, Grant and Jessica, and the grandparents of five.

As you might expect, retirement has more changed, rather than slowed, the Simmons.

“We have a new hobby,” Harry said. “We attend music festivals.”

Jaymie also still is active with charity as a member of the Foundation Board of Northern Illinois University. She also is pursuing a sequel to her book.

As newlyweds, they climbed mountains. In midlife, they ran, biked and swam in triathlons. They’ve never stopped moving.