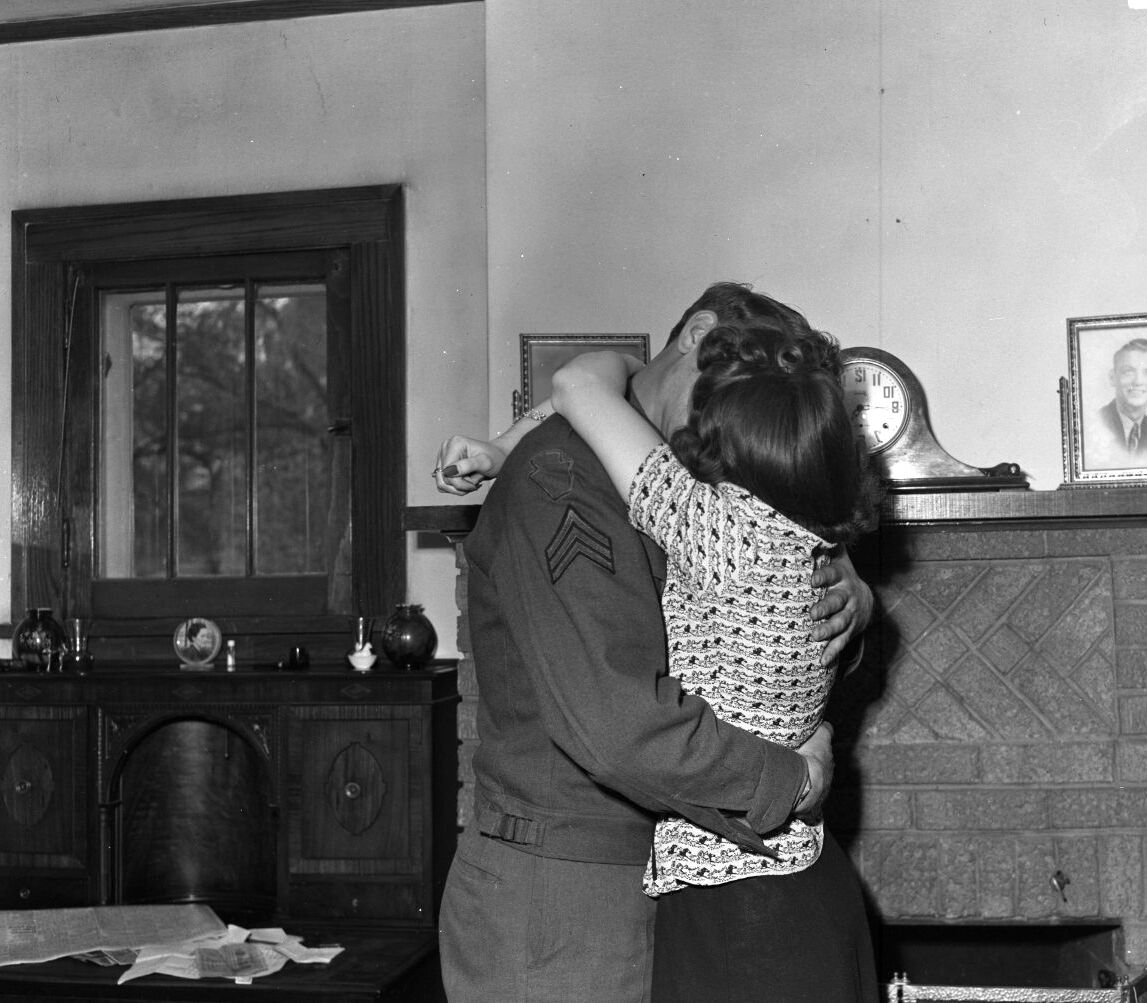 Jean Rowe greeted her husband with a hug when he arrived in Momence after hitchhiking from Fort Sheridan. They had not seen each other since July 1944, when his Army unit was sent to Europe. He spent more than four months as a German prisoner of war before being liberated on Jan. 31, 1945. 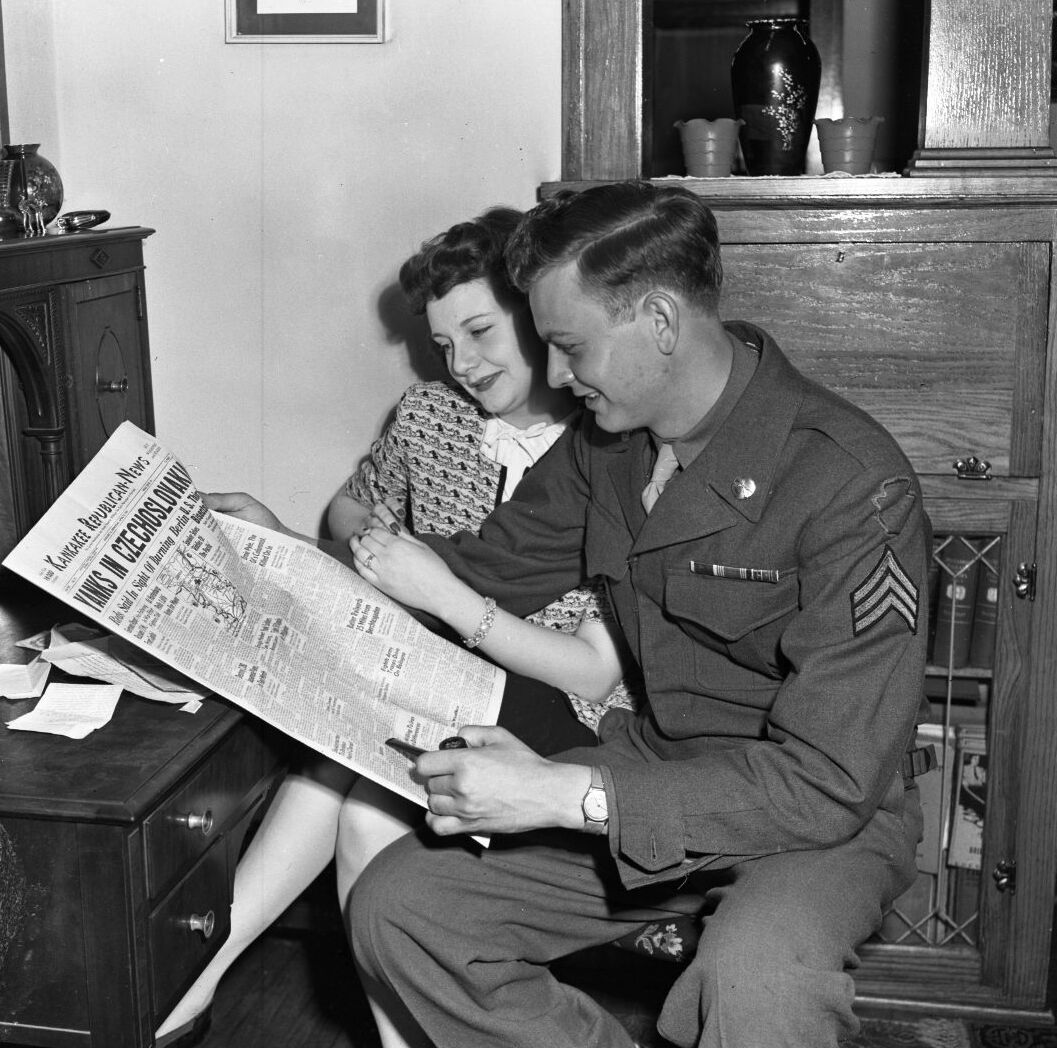 Sgt. Rex Rowe and his wife, Jean, caught up on the latest war news in the Kankakee Republican-News after he returned home to Momence in April 1945. Sgt. Rowe had been rescued from a German prison camp more than two months earlier.

Jean Rowe greeted her husband with a hug when he arrived in Momence after hitchhiking from Fort Sheridan. They had not seen each other since July 1944, when his Army unit was sent to Europe. He spent more than four months as a German prisoner of war before being liberated on Jan. 31, 1945.

Sgt. Rex Rowe and his wife, Jean, caught up on the latest war news in the Kankakee Republican-News after he returned home to Momence in April 1945. Sgt. Rowe had been rescued from a German prison camp more than two months earlier.

For 23-year-old Army Sergeant Rex Rowe, “coming home” was a long trip that took nearly three months and stretched over more than 4,000 miles from a German prison camp near Berlin to his home in Momence.

Rowe had been taken prisoner by German forces after being badly wounded in a battle on September 21, 1944. Initially, he was reported as “missing in action.” Later, his wife, Jean, was told that he was not missing after all, but was a German prisoner.

The young sergeant’s wounds were serious — he had been shot twice in the chest — and he spent time in five German hospitals before being transferred to a prison camp located about 30 miles east of Berlin. That camp was overrun and the prisoners liberated by Russian Red Army troops on January 31, 1945. The Russians had arrived just in time:

“Shortly before the liberation of the camp, the Germans had begun to move most of the prisoners back to Berlin,” noted the Kankakee Republican-News in an April 20, 1945, article on Rowe’s return home. “If the Russians had been an hour or so late, the men doubtless would not have been rescued, and would probably still be prisoners of the Nazi horde in Berlin.”

With the war in Europe nearing its end (Berlin fell on May 2; the Nazis surrendered on May 8), food and medicine were scarce in the prison camps. “The main prison food received by the prisoners,” reported the newspaper,” was a sort of soup made with rutabagas. An occasional ‘delicacy’ was a bread made from wheat bran and probably an added portion of sawdust. Six men were allotted one loaf.”

Sgt. Rowe told the newspaper reporter that the prison guards were all 60 to 75 years old. “One of the German corporals in charge of the prisoners had been in the first World War, and had been a prisoner of the American army during that conflict,” Rowe related. “The treatment he received at the hands of the Americans probably influenced his treatment of the Yanks ... the corporal never mistreated those under his care.”

Life in the camp was boring for the captives, since they were given no work to do. “Each day seemed like an eternity,” declared Rowe. It was also very uncomfortable during the cold winter months: there were no blankets available, so the prisoners were issued burlap bags stuffed with sawdust to sleep under. Several of Rowe’s fellow prisoners suffered frostbite.

Since the camp was not far from Berlin, the prison inmates witnessed the nightly Allied bombing raids on the city. “The lighting effects of the burning buildings against the sky made a dazzling sight,” Rowe told the newspaper.

By one of the strange coincidences of wartime, there were two sergeants from Momence in that German prison camp. Sgt. Rex Rowe and Staff Sgt. Burton Peterson. The two men had known each other in peacetime, and reconnected about two weeks after Rowe arrived at the camp. They were both among the group of approximately 175 prisoners liberated on January 31.

After their rescue, the former prisoners spent a number of weeks in Europe recuperating from their ordeal. They received medical treatment and were fed nutritious meals (Rowe weighed only 90 pounds when liberated). The trip home consisted of a voyage across the Atlantic Ocean and a special train from Boston to Fort Sheridan, Illinois.

When Rowe was informed at Fort Sheridan that he had a 21-day furlough, he wasted no time heading for home. Rather than take a train, he hitchhiked the approximately 90-mile distance between the military post in Chicago’s northern suburbs and Momence.

Awaiting his arrival in Momence was his wife, Jean, whom he had married on June 10, 1943, a year before “shipping out” to Europe. “The first type of food he asked for upon reaching Momence,” reported the Republican-News, “was pork chops —something hard to find these days. With a little effort, however, his mother-in-law and wife managed some of the tempting, war-scarce morsels.”

Rowe returned to Momence after his discharge, and embarked upon dual careers in business and politics. He worked for Strongheart Dog Food Company for 48 years, rising to the position of plant manager. In politics, he served as a Momence alderman for seven years, and guided the city for 24 years as its mayor. Rex Rowe died June 17, 2009, at the age of 87.

In World War I, a Momence man achieved worldwide fame after escaping from a train en route to a German prison camp. He spent 73 days traveling behind German lines before reaching freedom. Who was he?

Answer: Lieutenant Pat O'Brien, a pilot in Great Britain's Royal Flying Corps, was shot down in aerial combat on August 17, 1918. After leaping from the train, he traveled at night, covering a distance 150 miles, living on turnips and cabbage scrounged from farm fields. To finally escape into Holland, he tunneled under an electrified border fence. He died under mysterious circumstances in 1920, and is buried in Momence Cemetery.