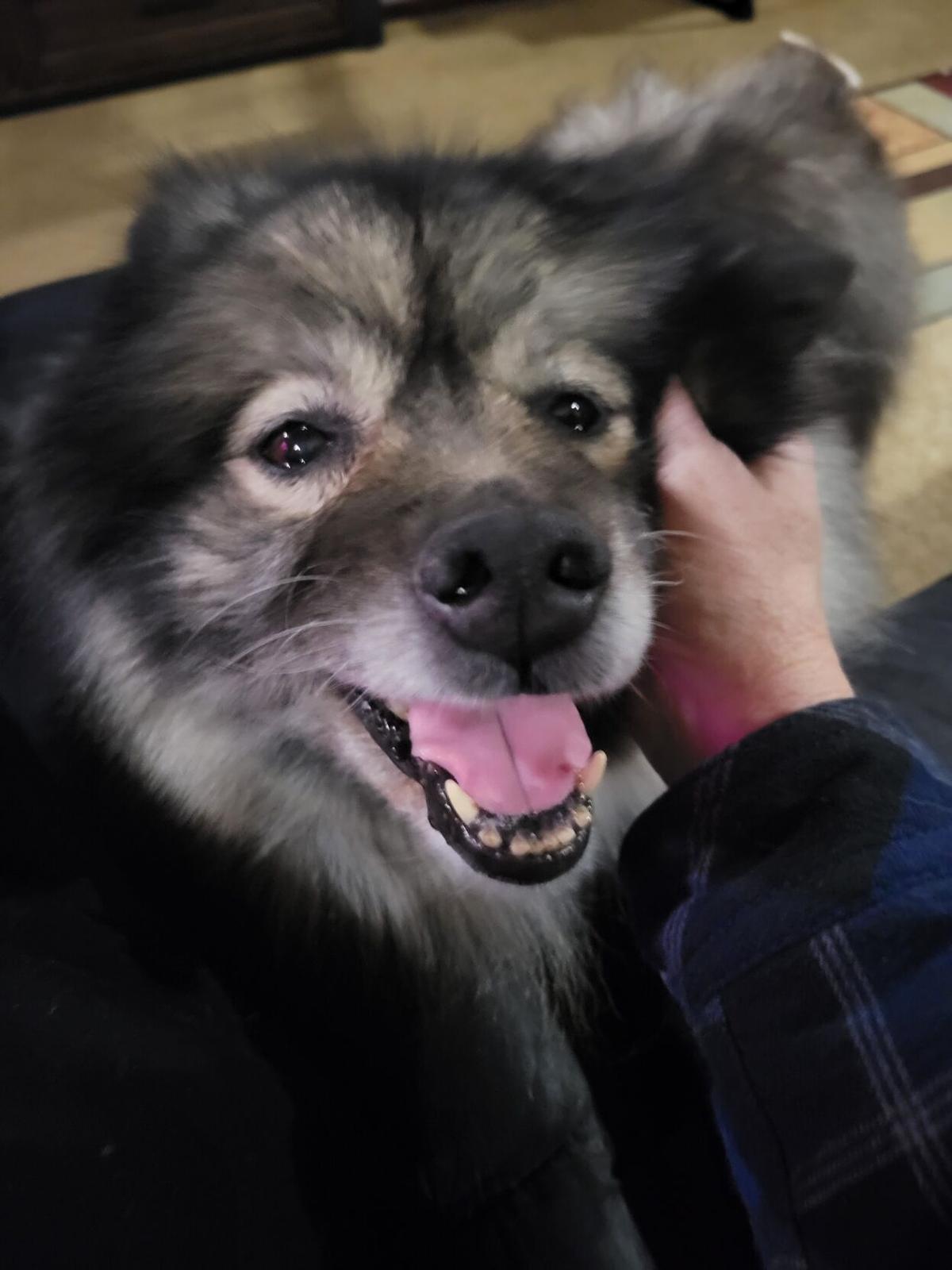 GG, a Keeshond breed dog, is recovering with a foster family in Illinois. She was found with her muzzle and legs zip-tied on Jan. 6 in a Kankakee County field. 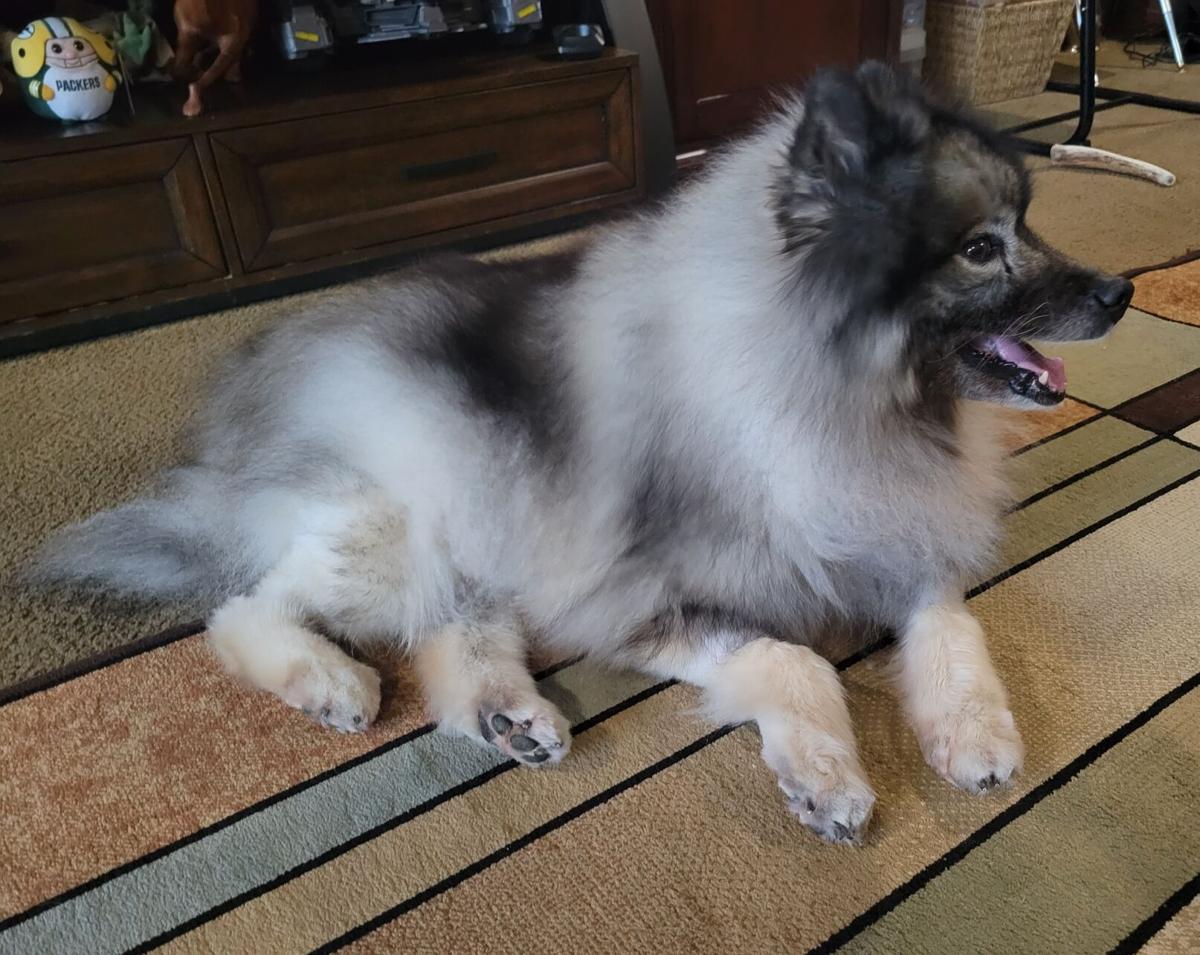 Found in a Kankakee County field with her mouth and legs zip-tied, GG is recovering at a foster home in Illinois. She is a nine-year-old Keeshond breed. She was one of three Keeshonds confiscated along with 11 cats. READ MORE.

Slowly but surely, a dog found in a field north and east of Manteno with its legs and muzzle zip-tied is recovering from her ordeal in January.

The 9-year-old female Keeshond breed now known as GG is living with an animal foster in Illinois.

“I tell her that a thousand times a day,” Benz said in a telephone interview.

”To comfort her for what happened and let her know she is alright.”

GG was found by a farmer in a Kankakee county farm field on Jan. 6.

She was one of three Keeshond owned by Linda Stam, a registered American Kennel Club breeder.

Stam is believed to have been running a puppy mill.

It is estimated that there are at least 10,000 puppy mills in the United States, fewer than 3,000 of which are regulated by the U.S. Department of Agriculture, according to the Humane Society of America.

Benz owns, shows and breeds Keeshonds. She has done so for 30-plus years. “I didn’t know a lot about (Stam),” Benz said. “I knew she had been breeding Keeshonds for two decades.”

Benz said she contacted the AKC and they have suspended Stam’s privileges as of Feb. 16.

Court records show Stam was indicted Feb. 5. She paid the required 10 percent of her $25,000 bond. Stam will be formally charged at her Feb. 23 court date. Stam agreed to permanently relinquish all the animals

“I don't know of any other charges at this time, unless new facts come out,” said Erika Hamer, the assistant state’s attorney prosecuting the case.

“I do not have any previous criminal history for her. The defendant has not even been arraigned yet or formally been to court on the charges. She only has appeared for the turnover of the animals.

On Jan. 6, a day after GG was found, Kankakee County Sheriff’s deputies and Animal Control officers had a search warrant and confiscated the Keeshonds (two females and one male) and 11 cats that Stam owned.

The other Keeshonds have been placed in foster homes. The cats were placed in two rescue shelters.

GG was found by Grant Senesac, a farmer who lives next door to Stam.

“Grant is a salt of earth guy,” Benz said. “Grant picked her up and she was grateful to be picked up.”

Senesac and Benz said officials told them Stam was in compliance with Kankakee County regulations for kennel owners.

Both said she did the bare minimum in regards to pen size, housing, and making sure they had food and water.

Benz said GG was sick and could no longer be bred.

Keeshonds are known for being affectionate.

“She is extremely affectionate. She is learning how to enjoy,” Benz said.

“They are baby steps.”

Grant Senesac noticed something in a farm field behind his house in the 5700 block of East 6000N Road on Jan. 6.

A farmer, Senesac said he came out of his shop where he had been working, looked into the field and spotted something.

Senesac said he looked through binoculars and saw the object was furry. He rode his Gator out to the site.

“I thought it was a coyote that had mange or some other disease,” he said. “I went out there. I thought I would have to put it down.”

Senesac discovered a dog that had zip ties around its muzzle and legs.

Senesac photographed the dog, a female Keeshond breed, before freeing it. He said he picked it up and cradled her near him.

He knew the dog. It belonged to his neighbor, Linda Stam. It was one of three Keeshonds that were held in a fenced-in kennel.

Senesac said they followed footsteps and paw prints in the snow back to Stam’s house.

Authorities say the 70-year-old Stam is an American Kennel Club licensed-breeder of Keeshonds. She was in compliance with Kankakee County regulations.

Ironically, a week before finding the dog, Senesac said an animal control officer stopped at his house by mistake. The officer was there in regards to renewing Stam’s kennel license.

On Jan. 7, armed with a search warrant, deputies and animal control officers confiscated the three Keeshonds as well as 11 cats found inside the residence.

The Keeshonds (2 females and a male) and five of the cats were microchipped.

“I had no idea the cats were in that house,” Senesac said when asked.

Senesac and his late wife, Michele, had reached out to authorities before, only to be told Stam was in compliance. The outdoor kennel met the minimum guidelines for the area. They had dog houses, water and food.

The dog Senesac rescued now is recovering at the home of an animal foster family located in Illinois. Senesac wonders what would have happened to the dog if he had not discovered it.

“It's weird how things happen. The right people were there at the right time.”