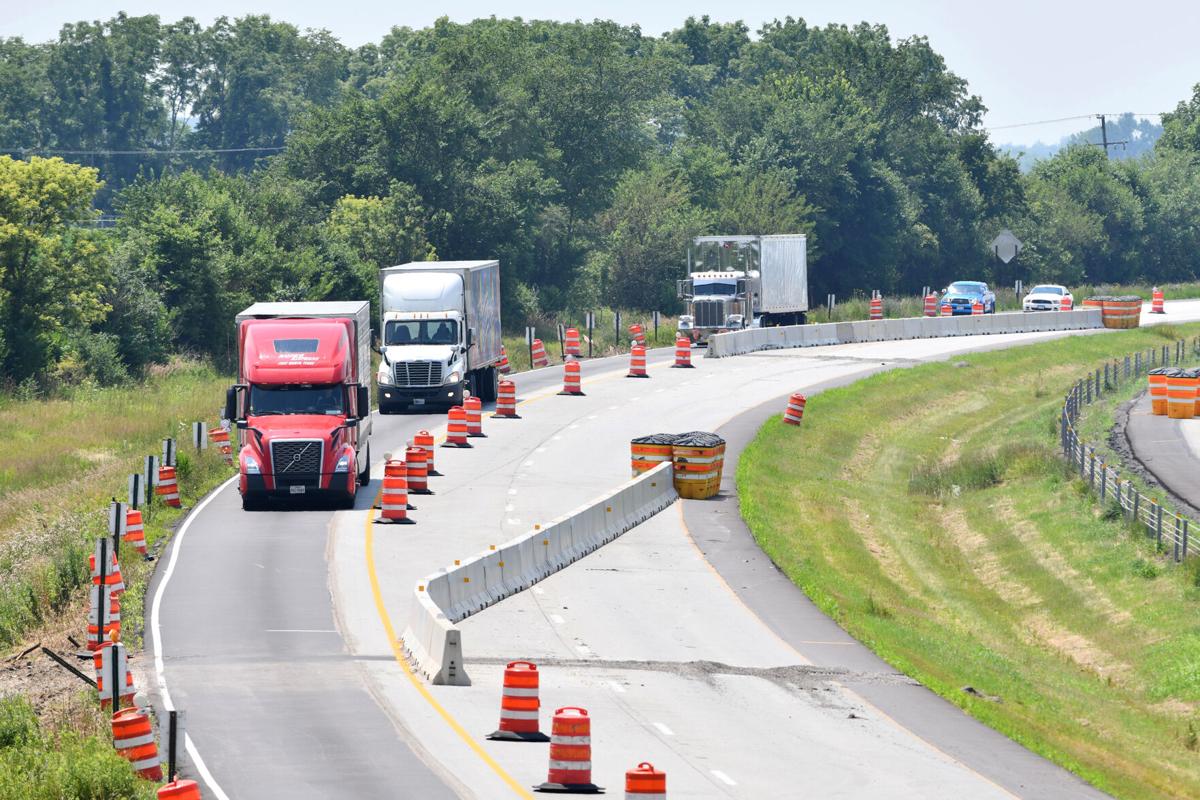 Semis travel north on Interstate 57 this week through a construction zone where five accidents involving commercial and passenger vehicles have happened since the beginning of the month. The construction zone is between mileposts 302 and 311. 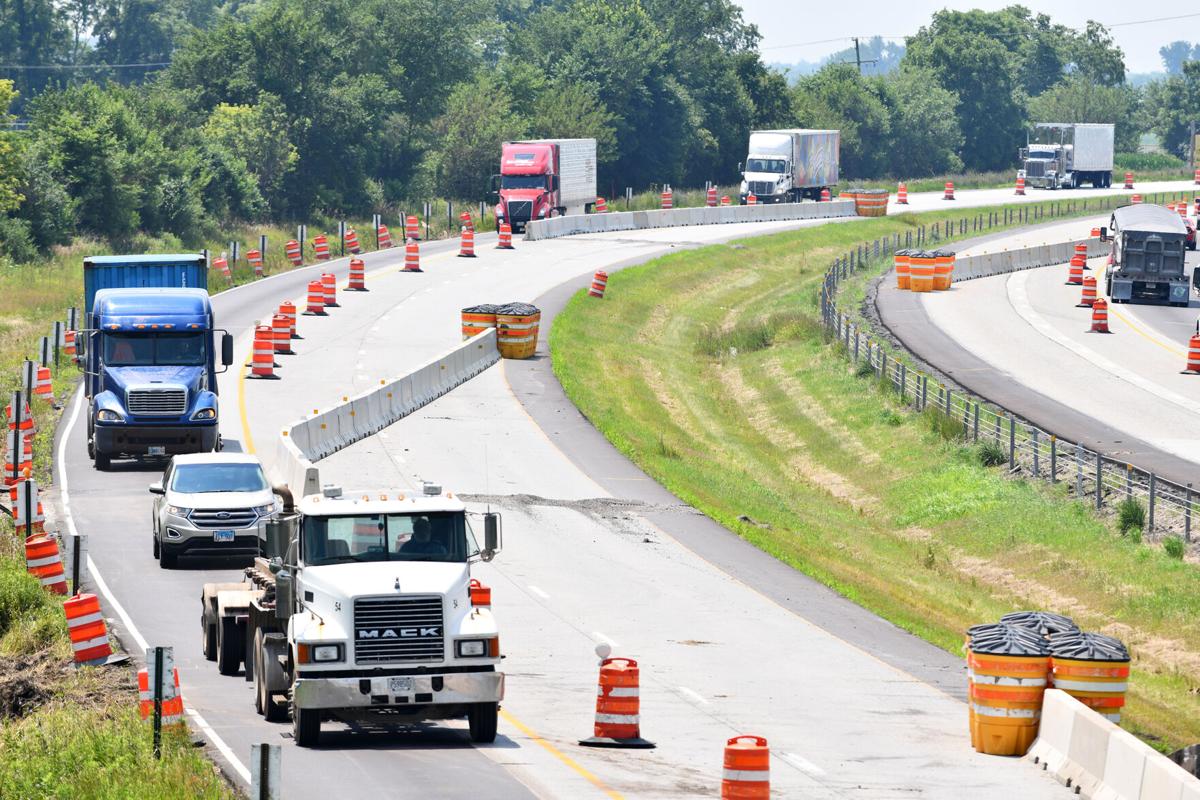 Traffic travels north on Interstate 57 on July 6 through a construction zone, where five accidents involving commercial and passenger vehicles have happened since the beginning of the month. The construction zone is between mileposts 302 and 311. READ MORE.

Semis travel north on Interstate 57 this week through a construction zone where five accidents involving commercial and passenger vehicles have happened since the beginning of the month. The construction zone is between mileposts 302 and 311.

Traffic travels north on Interstate 57 on July 6 through a construction zone, where five accidents involving commercial and passenger vehicles have happened since the beginning of the month. The construction zone is between mileposts 302 and 311. READ MORE.

KANKAKEE — Over the course of the first six days of this month, Illinois State Police investigated five crashes in a work zone on Interstate 57 in Kankakee County.

The work zone is located between the 302 and 311 mileposts in both directions.

No one has been killed or seriously injured in any of the crashes.

Four of the crashes involved semi-tractor trailers. The other was an SUV.

They occurred between the 308 and 310 mileposts.

They also occurred during a holiday weekend when traffic is heavier.

People commenting on social media said the work zone is poorly laid out.

Other commenters blame the drivers, saying motorists need to slow down and pay attention.

State police and Illinois Department of Transportation officials took notice of the accidents and additional precautions were put into place this week.

“The Illinois State Police District 21 has been in contact with IDOT in reference to recent crashes in the area, ISP Captain Don Aaron Harsy said in a statement.

“Since the incidents, the contractor has installed additional 45 mph signs, ‘Low Shoulder’ message boards and additional barrels for delineating the edge of shoulder,” IDOT official Maria Castaneda said in an email.

A Daily Journal reporter drove through the northbound and southbound work zones on Thursday afternoon. Traveling the posted work zone limit, the changes were evident.

The zone also included a state trooper parked in the southbound lanes with his emergency lights activated.

Many vehicles observed the posted 45 mph speed limit, but there were signs other drivers still wanted to zip through at a faster pace.

The same scenario occurred in the northbound zone.

“The posted speed limit in the work zone is 45 mph, however, traffic continues too far exceed those limits,” Castaneda noted.

Before entering and exiting the zones, the reporter travelled the posted 70 mph limit. Many passenger vehicles were going above the posted limit.

“IDOT is committed to making the safety of our workers and the traveling public our No. 1 priority. We want to remind the public that when driving in and around work zones to slow down, pay attention and avoid all distractions,” Castaneda said.

Being ticketed for speeding in a work zone is expensive.

“Crashes that occur in work zones are particularly disheartening because a large majority of them could be avoided if motorists were simply slowing down and paying attention,” added Harsy.

There have been 21 crashes in the work zone since the project began in April.

Work on the project started in April and is scheduled to be completed by July 1, 2022.

“Slow down and put all devices down. Do not drive distracted. Your full attention is needed. There is no margin for error,” he said.

“I tell people to drive through a work zone like a member of your family is working in it.”

Rules of the road

The following are a few commonsense rules that are meant to save lives:

Slow down. Pay attention to the posted speed limits.

Be on the lookout for slowed or stopped traffic and lane shifts — conditions change quickly.

Drop it and drive — don’t use phones and electronic devices.

Move over — give emergency and construction equipment distance.

The ongoing project on Interstate 57 between mileposts 302 and 311 will repair the following bridges: Otto Road and River Road over I-57 and the structure over Minnie Creek. The project also include culvert removal and replacement, new guardrail and resurfacing the nearly 9-miles of I-57 from the Chebanse interchange (Exit 302) to the Kankakee River.

Scott's Law, named after Lieutenant Scott Gillen of the Chicago Fire Department who was struck and killed while assisting at a crash on the Dan Ryan Expressway, requires that, when approaching any emergency vehicle stopped along the roadway (including construction vehicles and equipment), you must reduce your speed, change lanes if possible, and proceed with caution.

A person charged with this offense must appear in court. Penalties include fines for up to $10,000 and have driving privileges suspended for up to two years. In cases of death of another person, additional penalties can apply such as reckless homicide, which could result in imprisonment from 3 to 14 years if convicted.