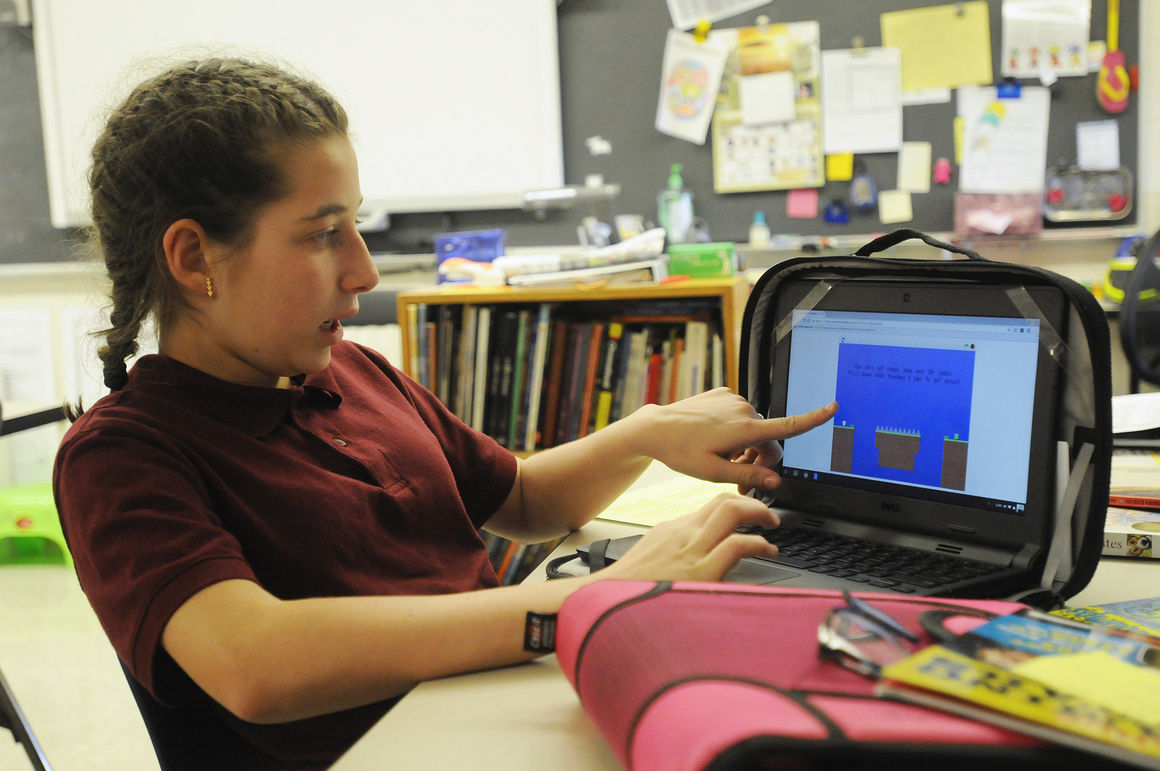 Kankakee Junior High School seventh grader Julia Cox demonstrates the video game she created in her language arts class as part of the teacher-initiated "20 Time," during which students dedicate 20 percent of their time to a project of their choosing. 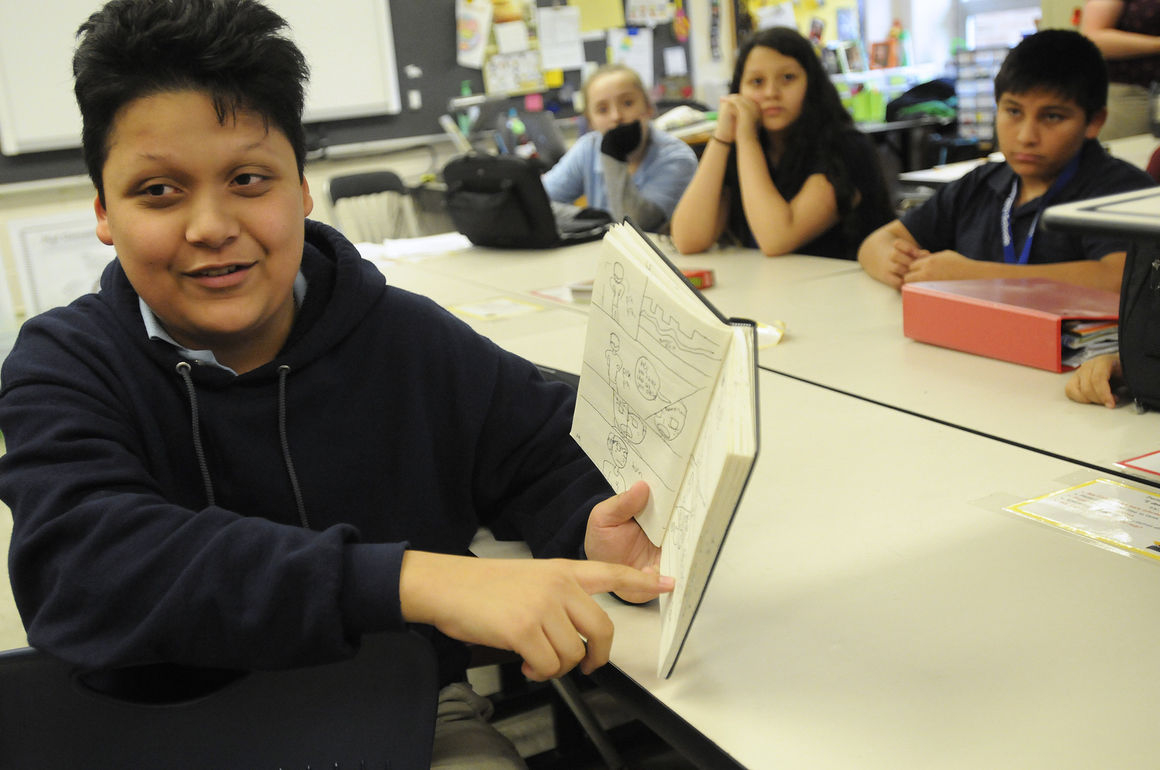 Kankakee Junior High School seventh grader Ernesto Pizano shows off the graphic novel he created in his language arts class as part of the teacher-initiated "20 Time," during which students dedicate 20 percent of their time to a project of their choosing.

Kankakee Junior High School seventh grader Julia Cox demonstrates the video game she created in her language arts class as part of the teacher-initiated "20 Time," during which students dedicate 20 percent of their time to a project of their choosing.

Kankakee Junior High School seventh grader Ernesto Pizano shows off the graphic novel he created in his language arts class as part of the teacher-initiated "20 Time," during which students dedicate 20 percent of their time to a project of their choosing.

KANKAKEE — The 20 Percent Time rule is a quirk of Silicon Valley, the kind of work schedule we associate with office nap spaces and programmers at ping-top tables.

Born in the early days of Google as a way to encourage creativity and innovation, the concept was simple: Every employee would spend 20 percent of his or her time on a private project related to the company's vision.

While 20 Time is no longer part of life at Google, some of those personal projects grew into core elements of Google, including Gmail and Google News. At Kankakee Junior High School, a group of teachers adapted the rule for their language arts classrooms after reading about a high school teacher who introduced it to her students.

"We figured to get them engaged, we would let them work on something they wanted to work on, and that would make them more interested, more willing, more engaged to produce something they were passionate about," said Lee Anne Brandt, a seventh grade language arts teacher who brought 20 Time to the classroom with her co-teacher Jennifer Berns.

For a quarter, the kids spent time every Friday working on their 20 Time goals, first presenting a 60-second elevator pitch to their peers, then checking in with teachers as the project progressed. Finally, they had a presentation in early October.

"Our focus wasn't on the product so much as the presentation at the end. The basis of the grade was the presentation, not the project," said Melinda Kimmel, the seventh grade language arts teacher who first decided to try 20 Time. "We had their clean up their grammar, but we didn't guide them too much on that.

"I know that sounds weird because we're language arts teachers," she added with a laugh.

It might have been weird, but it worked. Soon, Brandt, Berns and Kimmel were helping students with an incredible range of projects, from college research to cooking tutorials to novels in progress. Parents got involved, and students who had been reluctant to participate in class suddenly were excited.

Among the projects Nevaeh Hunt put together was a guide on cooking breakfast for a family, Ernesto Pizano created a graphic novel about a science experiment gone wrong, Crystal Zamora wrote the first chapter of a novel about the Holocaust, Abram Ramos sent care packages to troops overseas, Damien Kelly made a YouTube series about his favorite video game, Cornasia Womack learned to make fried oreos, Natalie Diard wrote a children's book and Julia Cox coded a simple computer game with more than 4,000 plays.

"The kids are capable of way more than they're letting on, and more than we've come to expect," Kimmel said.

"I was nervous because most of the time I'm the shyest girl in my class. I don't like to speak up a lot. When I was presenting my face got red," said Nadia Puebla, who worked on a family tree. "[Afterward] I felt like I didn't have to be the shy girl in the classroom anymore."

One of the students, Patricia Tymec, grew up watching horror movies and has decided to pursue a career as a special effects makeup artist. For her project, Patricia made an instructional makeup video and transformed her mom into the Batman villain the Joker.

"What was really cool is that I sometimes had to pause it to have my mom tell me how to say a word correctly. She had as much fun as I did. There were parts we had to stop because we were giggling so much," Patricia said.

Not only did parents help, but the students began to cheer each other on.

"When one of my students achieved, it lit a fire under the other students. If we had a student who hadn't tried very hard or hadn't finished, the other kids were inspiring them to go home and finish theirs. It wasn't the teachers cajoling or nagging. They inspired each other," Brandt said.

Many of the students plan to continue working on their projects, and starting new ones next quarter. For some of them, the 20 Time has made a big impact.

"It made me want to go there, learning even more," said Josiah Mason, who started researching Crimson Tide football before falling in love with the University of Alabama. "I changed my behavior around. I know if I want to go to that college, I have to do good things in my life. It really starts in ninth grade, but I want to get a head start on it."