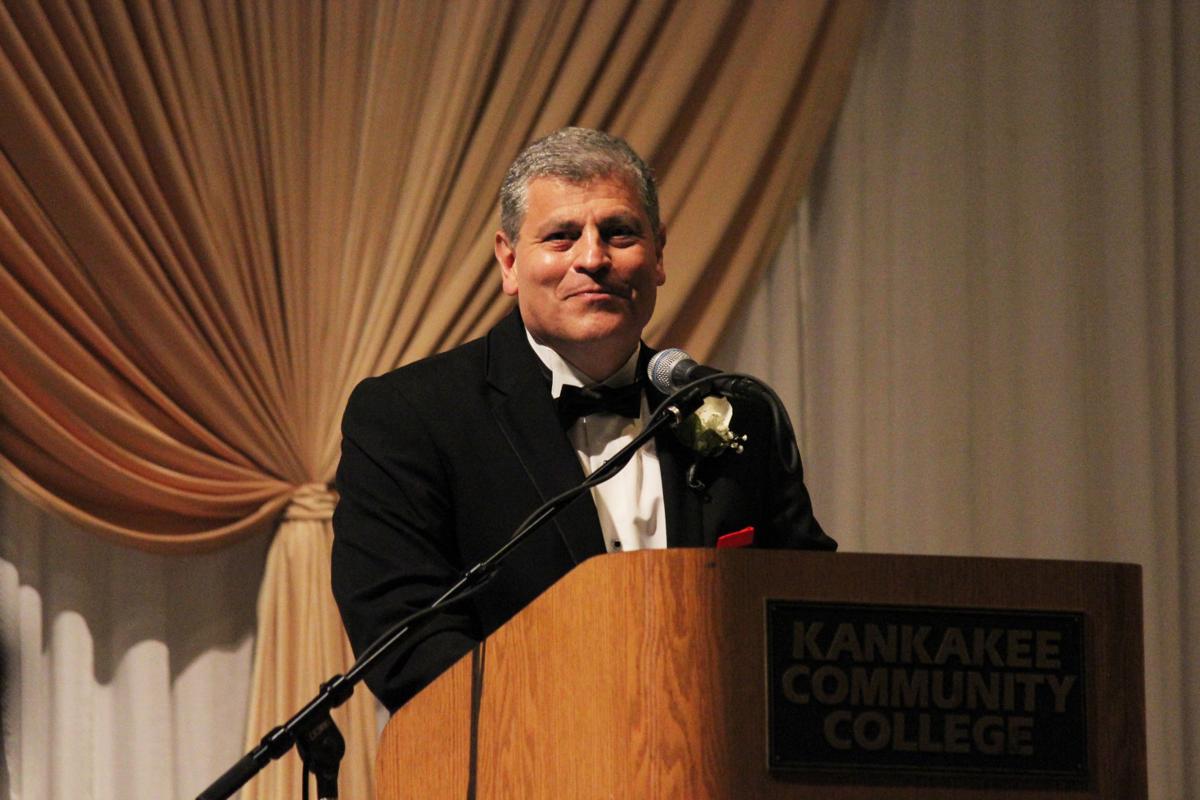 Kankakee Community College President John Avendano addresses the crowd at the school’s 50th Anniversary gala held in 2017. Avendano has said the gala stands as one of the highlights of his decade-long tenure as the college’s president. 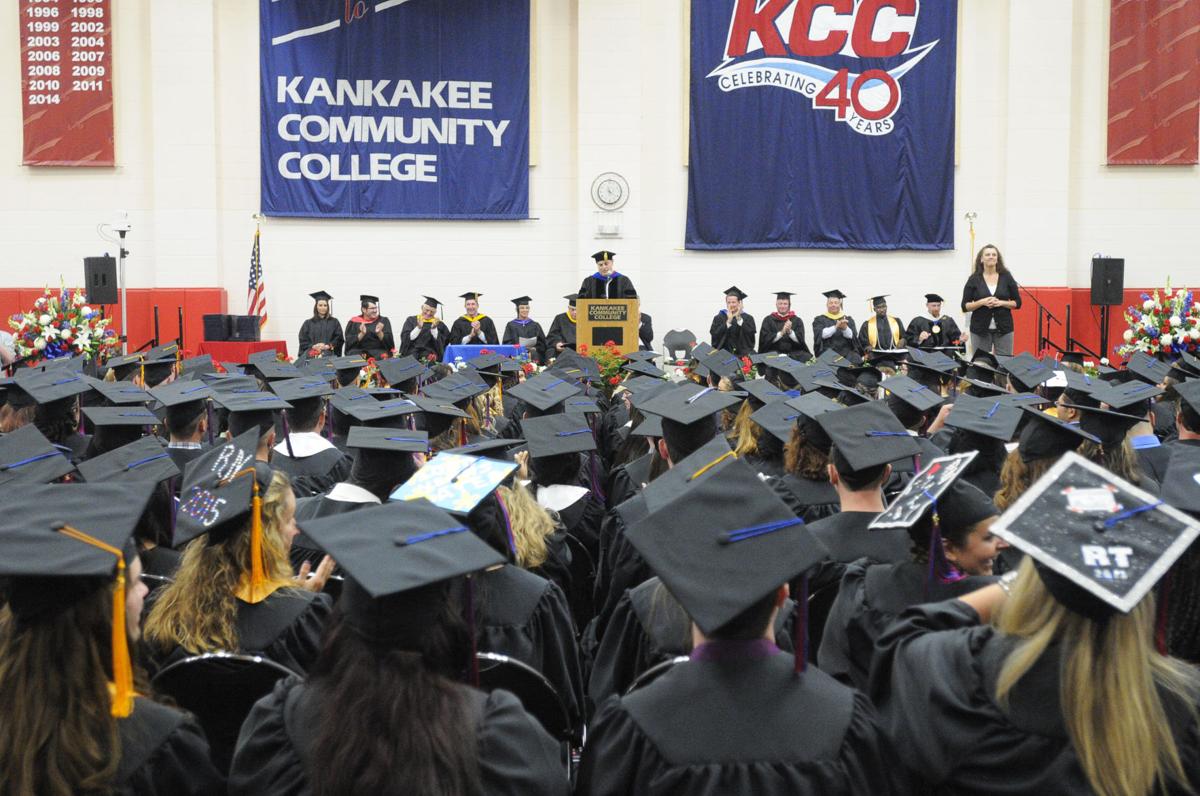 KCC president John Avendano gives the closing remarks at the 2015 college commencement ceremony. The ceremony held this coming spring will be Avendano’s last before he retires from the school.

Kankakee Community College President John Avendano addresses the crowd at the school’s 50th Anniversary gala held in 2017. Avendano has said the gala stands as one of the highlights of his decade-long tenure as the college’s president.

KCC president John Avendano gives the closing remarks at the 2015 college commencement ceremony. The ceremony held this coming spring will be Avendano’s last before he retires from the school.

As incredible as it might seem, Kankakee Community College President John Avendano had no intention of going to college after his high school graduation.

His father, Juan, who immigrated to Aurora, from Mexico in the early 1940s, had other ideas.

“I ended up at Waubonsee Community College. I played baseball. I majored in eligibility,” the 56-year-old Avendano said. “I wasn’t a serious student.”

While maintaining grades good enough to keep himself eligible for baseball, the first-generation U.S. citizen said school really was nothing more than a place to go.

That indifferent attitude changed dramatically as a complete tear of his right knee ligaments, the result of a sandlot football game injury, occurred during his sophomore year at Waubonsee.

“The doctors said I wouldn’t run again, but I do run. But that’s when I became a student. I began to focus on education, what my parents always told me,” he said.

His journey through education, all the way to a doctorate degree, eventually landed Avendano at KCC, where he has served at the school’s president since July 2009.

After a distinguished career of helping guide the college through building expansions, new academic programs and challenging state financial times, Avendano announced this past fall that he would be ending his tenure.

For the accomplishments at KCC and the vital role he’s played in the community, Avendano has been named the Journal’s 2018 Citizen of the Year.

“I’m really at a loss for words,” Avendano said when informed of his selection. “I’m truly humbled. I’m very honored.”

Avendano and his wife, Janet, have three children. In addition to his time at KCC, he has served as an associate dean at Waubonsee and as a vice president of academic affairs and student development at Illinois Central College in Peoria.

Those jobs made a high level of interaction with others a necessity. Nonetheless, Avendano calls himself an introvert.

“My position requires me to be an extrovert, but being in front of people is not something I’m comfortable doing. I do it, but I get nervous,” he said.

Avendano’s parents both were factory workers. He father ran a boxing club in Aurora. The club became so popular, the Aurora Park District eventually asked him to run it for them.

“It was a way for him to help the community. It helped take kids off the street,” Avendano said. Avendano became a boxer as well. He likely didn’t have much of a choice.

Now 87, he said his father still likely would beat him inside the ropes.

“He still works out. Perhaps not as much as he once did. I’d still be afraid to spare with him.”

Interestingly, neither parent earned a high school diploma. Times were much harder in those years.

“But they learned how to learn.”

While being at the helm of any organization, it’s sometimes hard to think others might have a better idea, a better way.

But Phil Kambic, Riverside Healthcare’s president and CEO and friend of Avendano, said listening is one of his best characteristics.

“Sometimes people want to talk rather than to listen. John will listen to all sides of an issue before coming to any decision. He’s a very thoughtful and deliberate person,” Kambic said.

The two men will stay connected, Kambic said, but not being able to meet with him at public events and organizations where they have served will be a personal loss.

Avendano does not rule out leading another community college somewhere outside of Illinois in the future. He said he is not ready to sit on a beach just yet.

Kambic said he fully expects Avendano to lead another college.

During his 10-year tenure, KCC established the Miner South Extension Center in Watseka in 2013 and the Manufacturing and Industrial Technology Center in Kankakee in 2014.

In addition to guiding KCC, he served as board chairman of the Economic Alliance of Kankakee County for the past two years. He also serves on the Grundy Livingston Kankakee Workforce Board, Riverside Medical Center board of directors and the Illinois Community College Council of Presidents.

Avendano was alliance vice chairman when Tim Nugent was hired. Nugent said the guidance he shared was indispensable.

“He helped keep the alliance viable. He helped blend a good group of business and education people. He’s such an inclusive person,” Nugent said. “He wanted people at the table, and he always looked for ways KCC could improve to help our area.

“I honestly believe the success the area has had in recent years is in part a testament to what he has done at KCC. You have to get out into the community to see what it needs, and John is out in this community,” Nugent said.

When Nugent learned Avendano was reluctant to enroll in college after his high school graduation, he said that’s not surprising.

“I expect it to be really, really difficult” to step away from the public, Avendano said. “It’s very hard to leave relationships that have been built. It’s difficult to leave these relationships.”

He said the student interaction is something he will particularly miss.

“After the interview, we shook hands and he walked out. He was staying at the Hilton. The board members got together, and we all kind of looked at one another and said ‘That’s our guy.’

“We told (former board member) Denny Marek to get over there and bring him back. After getting to know him, we knew we had someone very special,” Martin said. “If you haven’t had a chance to meet him, you’ve missed out.”

Martin said his hope is Avendano will stay in the community. He doesn’t expect that will happen, however.

“We have been very fortunate to have had him for the past 10 years.”