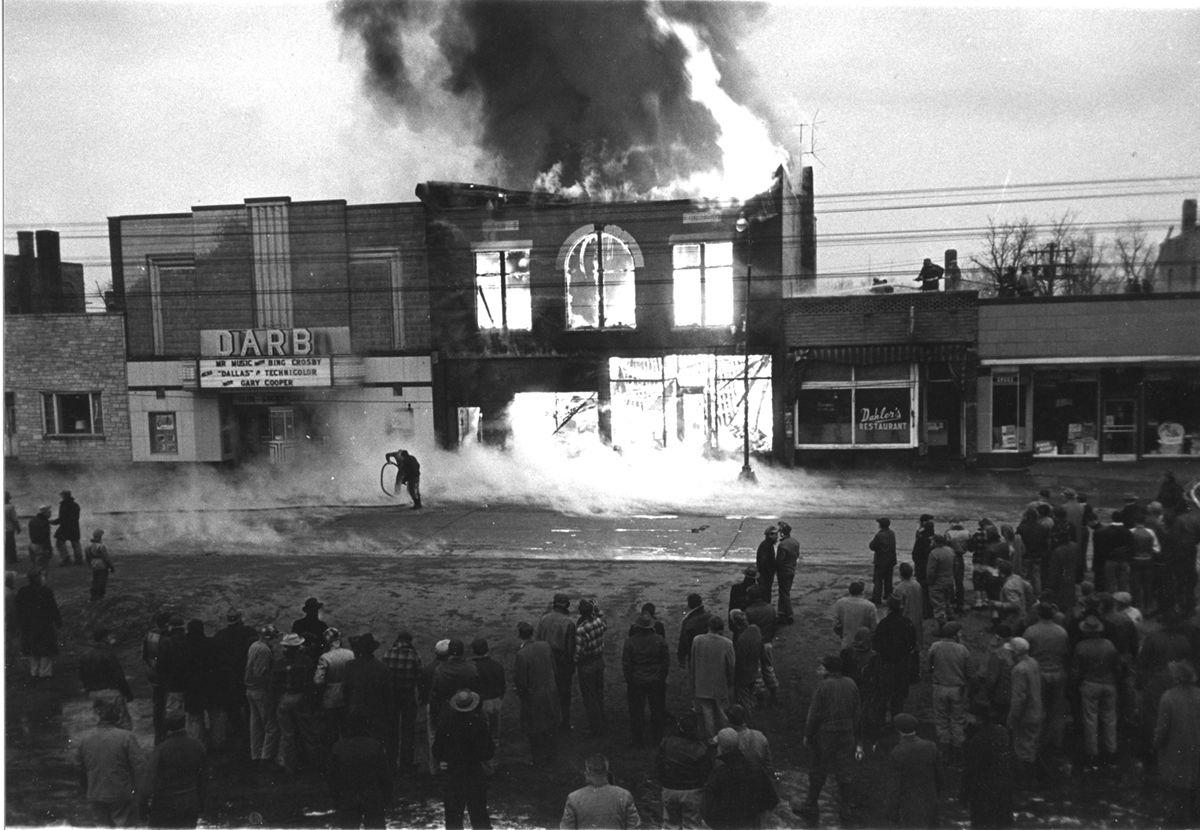 One of the most memorable events in Manteno history was the St. Aubin Hardware Store fire on Main Street in January, 1951. Firemen managed to save adjoining structures, the DARB Theater and Dahler’s Restaurant. 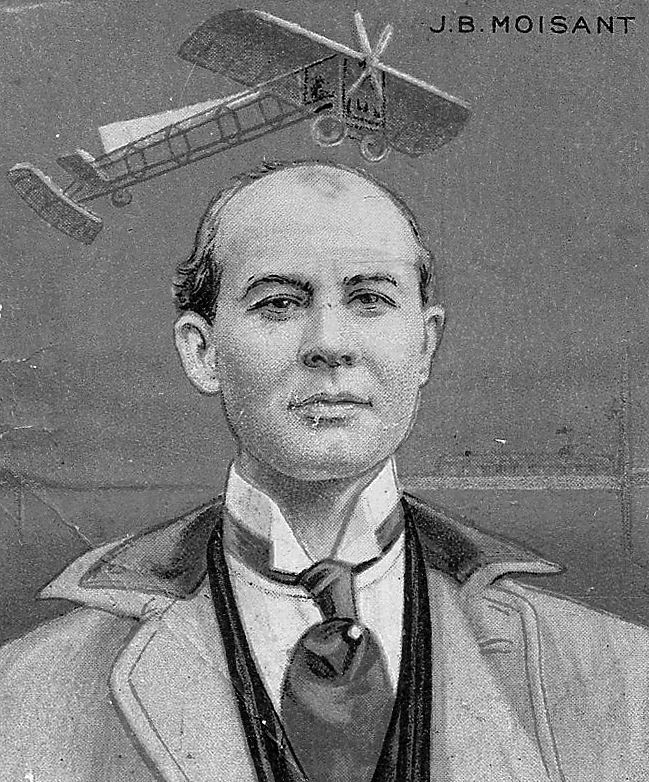 John B. Moisant, whose family lived in the Manteno area in the 1880s, was an aviation pioneer. He was the first pilot to make the trip across the English Channel in an aircraft carrying a passenger. His sister, Matilde, was the second woman in the United States to qualify for a pilot’s license. 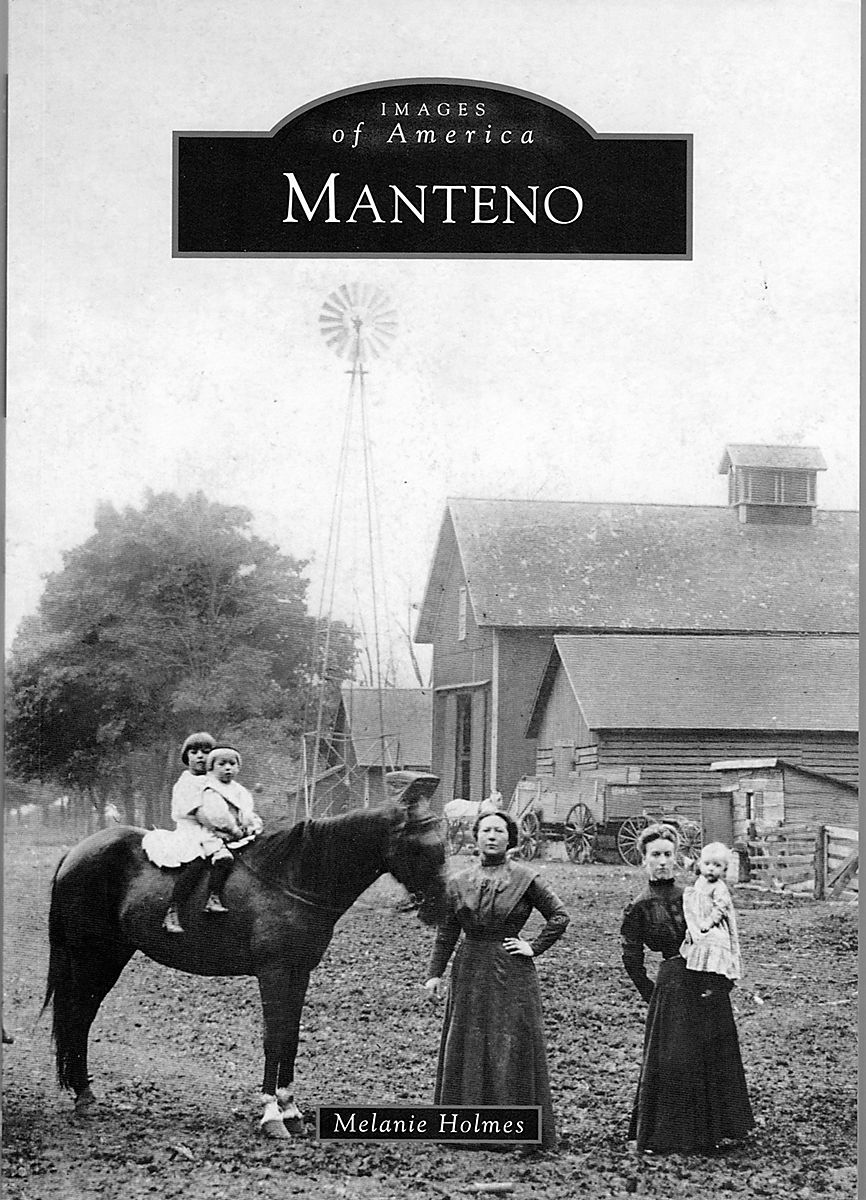 The cover of the new Manteno book features members of the Albert Stauffenberg family on their farm northwest of the village. The photo was taken in about 1913.

One of the most memorable events in Manteno history was the St. Aubin Hardware Store fire on Main Street in January, 1951. Firemen managed to save adjoining structures, the DARB Theater and Dahler’s Restaurant.

John B. Moisant, whose family lived in the Manteno area in the 1880s, was an aviation pioneer. He was the first pilot to make the trip across the English Channel in an aircraft carrying a passenger. His sister, Matilde, was the second woman in the United States to qualify for a pilot’s license.

The cover of the new Manteno book features members of the Albert Stauffenberg family on their farm northwest of the village. The photo was taken in about 1913.

For many years, the village of Manteno described itself with the slogan, “Small Town, Big Future.”

It could, just as well, have adopted an alternate version, “Small Town, Big Past”: the Kankakee County village has been the site of one of the nation’s largest mental hospitals, was recognized in the late 1800s as “the grain center of the state,” and was the home of one of America’s pioneer aviation families, the inventor of the largest camera ever built, and a woman whose crusading efforts secured important rights for mental health patients.

Stories of these places and people, and many more, are presented in a new book being published this week by Arcadia Publishing. Entitled simply “Manteno,” the 160-page volume is part of Arcadia’s pictorial “Images of America” series, featuring more than 250 photographs and drawings depicting the community.

Author Melanie Holmes, a Manteno native now living in a Chicago suburb, writes in the book’s introduction, “Sometimes one doesn’t realize just how unique Manteno is until, after leaving and dwelling elsewhere, they return with new eyes. The town, no matter how different from a decade (or five) ago, elicits a feeling of home....And for those who have moved away, they may agree that Manteno is as much a mindset as it is a place.”

The book is organized into ten chapters, each packed with photographs of people, places, and events gathered from many sources, including individuals and families long-resident in the village, local historians, and the Manteno and Kankakee County Historical societies. Like all the books of the Images of America series, each chapter opens with a short text introduction; the bulk of the information is provided by detailed captions accompanying each of the photos or drawings. The captions often include bits of information revealing aspects of everyday life in bygone days. For example, a photo showing two young workers taking a break from their labors at the Wright Creamery notes in its caption that “Both men are wearing wooden shoes (from the Sears catalog) to keep their feet dry.”

Central to Manteno, both physically and historically, was the Illinois Central Railroad which laid out the town and established a station there in 1854. “The railroad’s imprint on Manteno,” writes Holmes, “remains a century and a half later. Not just the tracks that slice through the middle of town, but the layout of the original streets mirror the track’s northeast path through town, as do nearby major highways such as US Route 45, Illinois Route 50, and Interstate 57.”

The original street plan, which the IC used for many towns along its line, was centered upon the depot. It featured numbered East-West streets (First North Street, First South street, etc.) and North-South streets with tree names: Hickory, Walnut, Chestnut, Oak, and Locust. Names of the numbered streets have changed, but the original tree names are still used, with one exception: Chestnut—the town’s traditional business thoroughfare — was renamed as Main in the 1940s.

Change also came to what was once the town’s largest employer: Manteno State Hospital. Opened in 1930 on a large tract of land east of the village, the hospital was one of the country’s largest, housing more than 8,000 patients and employing thousands of people ranging from doctors and nurses to gardeners and laundry workers. Changing state mental health policies led to its closing in 1985. Since that time, a large veterans hospital has taken over part of the campus, while a number of warehousing and manufacturing companies have been established on the former hospital site.

The book also includes interesting stories of a number of people with village roots who achieved fame in various ways. Possibly the most well-known were the Moisant family of aviation pioneers. In the early 1900s, brothers John and Alfred Moisant formed the Moisant International Aviators, which entertained large crowds at county fairs and took part in air races across the country. Their sister Matilde was the second woman in the United States to qualify for a pilot’s license.

In the late 1800s, George R. Lawrence, son of a Manteno farm family, achieved success in the relatively new field of photography. He pioneered the art of making aerial photographs using balloons and kites, and developed improved methods of flash photography. Lawrence built the world’s largest camera (it made a negative 8 feet wide and 4 1/2 feet tall) to take a photograph of a new passenger train.

Elizabeth Packard, wife of a Manteno minister, was committed to the Illinois Hospital for the Insane at Jacksonville in 1860 (at that time, a husband could simply declare his wife insane and send her away), and spent three years there. In 1864, she was declared sane following a trial in Kankakee, and spent the rest of her life campaigning for mental health reforms. Those reforms, known as “Packard Laws” were adopted in many states.

The book covers many other topics, including schools and churches, local businesses, industries such as the Manteno brickyard, farming and related businesses, and answers the question of why Manteno High School didn’t field a football team for 57 years.

Official publication date for “Manteno” is Feb. 10 and copies are expected to be available at bookstores (including the Kankakee County Museum Store) soon after that date.

Although the Manteno State Hospital was far better known, the village had its own general hospital for almost 30 years (1948-1977). Who founded that hospital, and where was it located?

Answer: Dr. Daniel Hur and his wife, Dr. Naomi Kim, came to Manteno in 1936 to work at Manteno State Hospital. In February, 1948, they opened Hillman Memorial Hospital (named for Dr. Kim’s adoptive mother, Dr. Amanda Hillman) on Division Street, near Elm. It served the medical needs of many Manteno-area individuals and families until it closed in 1977. Today, the building houses a substance abuse program operated by Kankakee's Riverside Medical Center.