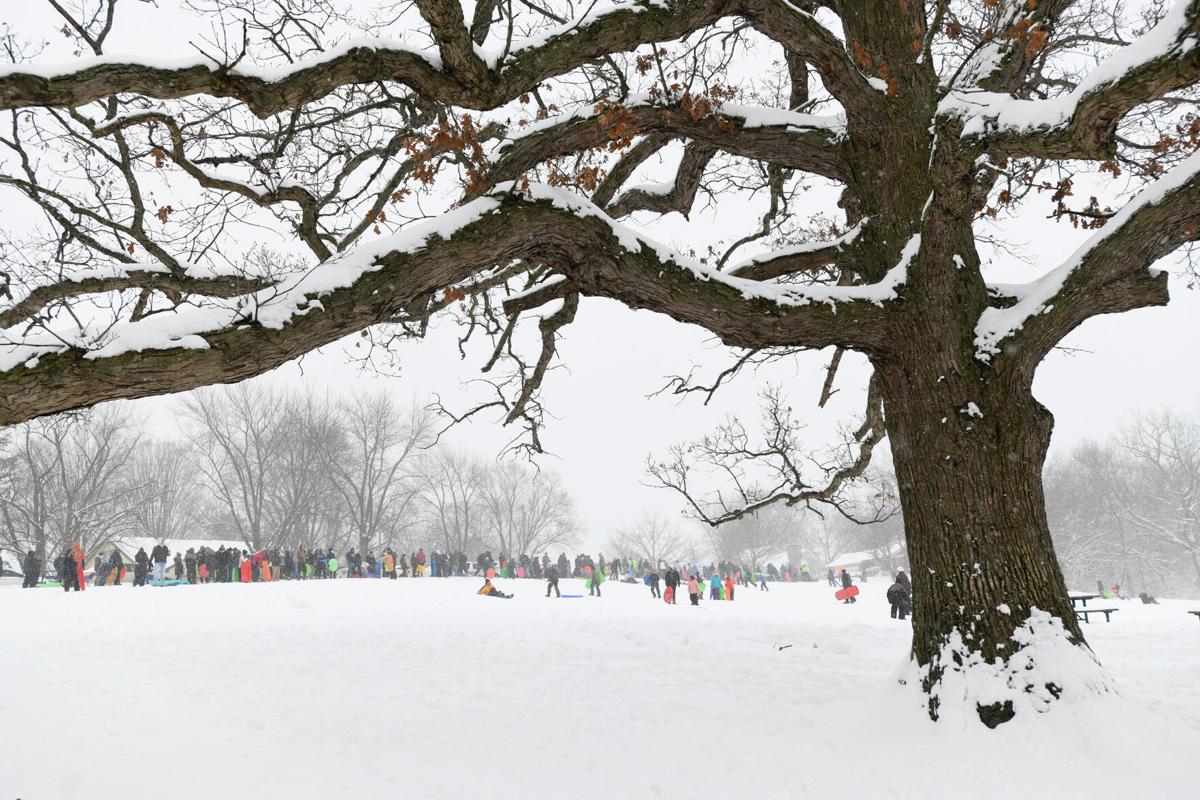 More than 100 people could be seen at Helgeson Park on Sunday afternoon enjoying the weekend’s snow accumulation on sleds, tubes and snowboards. After 7 to 12 inches fell through Saturday night, snowfall continued Sunday afternoon as 1 to 2 additional inches were predicted to fall through 6 p.m.

More than 100 people could be seen at Helgeson Park on Sunday afternoon enjoying the weekend’s snow accumulation on sleds, tubes and snowboards. After 7 to 12 inches fell through Saturday night, snowfall continued Sunday afternoon as 1 to 2 additional inches were predicted to fall through 6 p.m.

In addition, a number of streets have been designated as snow routes. Those can be found on the city’s website at citykankakee-il.gov/snow.php. Each snow route is identified by posted signs which also indicate that the route is also a tow zone.

Any person found to be in violation of this ordinance shall be subject to a fine of not less than $50 and not more than $500 for each offense, in addition to towing and storage fees.

Village ordinance says if your car is in the street and it has snow piled around it, dig it out ASAP and move it to your driveway, a cleared parking lot or a cleared area of your street for the day.

In addition, there are emergency snowfall routes described, and they can be found, along with other restrictions, on the village’s Facebook page at facebook.com/VillageofManteno.

Any person found to be in violation shall be subject to having the motor vehicle towed at owner’s expense and may be subjected to a fine not to exceed $200 for such offense.

Any motor vehicle parked or allowed to remain parked in violation of this section shall be considered a hazard to traffic and a public nuisance and may be removed by an authorized towing service designated by the police department and such towing and storage shall be at the owner’s expense.

The village’s snow ordinance is in effect. No motor vehicles may be parked or allowed to remain parked on a village street after a snowfall or 3 or more inches. It is against village ordinance to push snow onto the public roadways.

For more information, view the village Facebook page at facebook.com/villagebourbonnais.

The Kankakee County area will be under a winter storm warning from 3 p.m. today until 6 p.m. Sunday.

Be prepared for the coldest temperatures since January 2019

Forecasters say to plan for a long duration of much colder weather than we've grown accustomed to this winter.

As the sharpest cold wave holds in grips on the Kankakee River Valley region, don’t expect any dramatic relief from the cold anytime soon.

The polar vortex got in one more snow blast in the area.