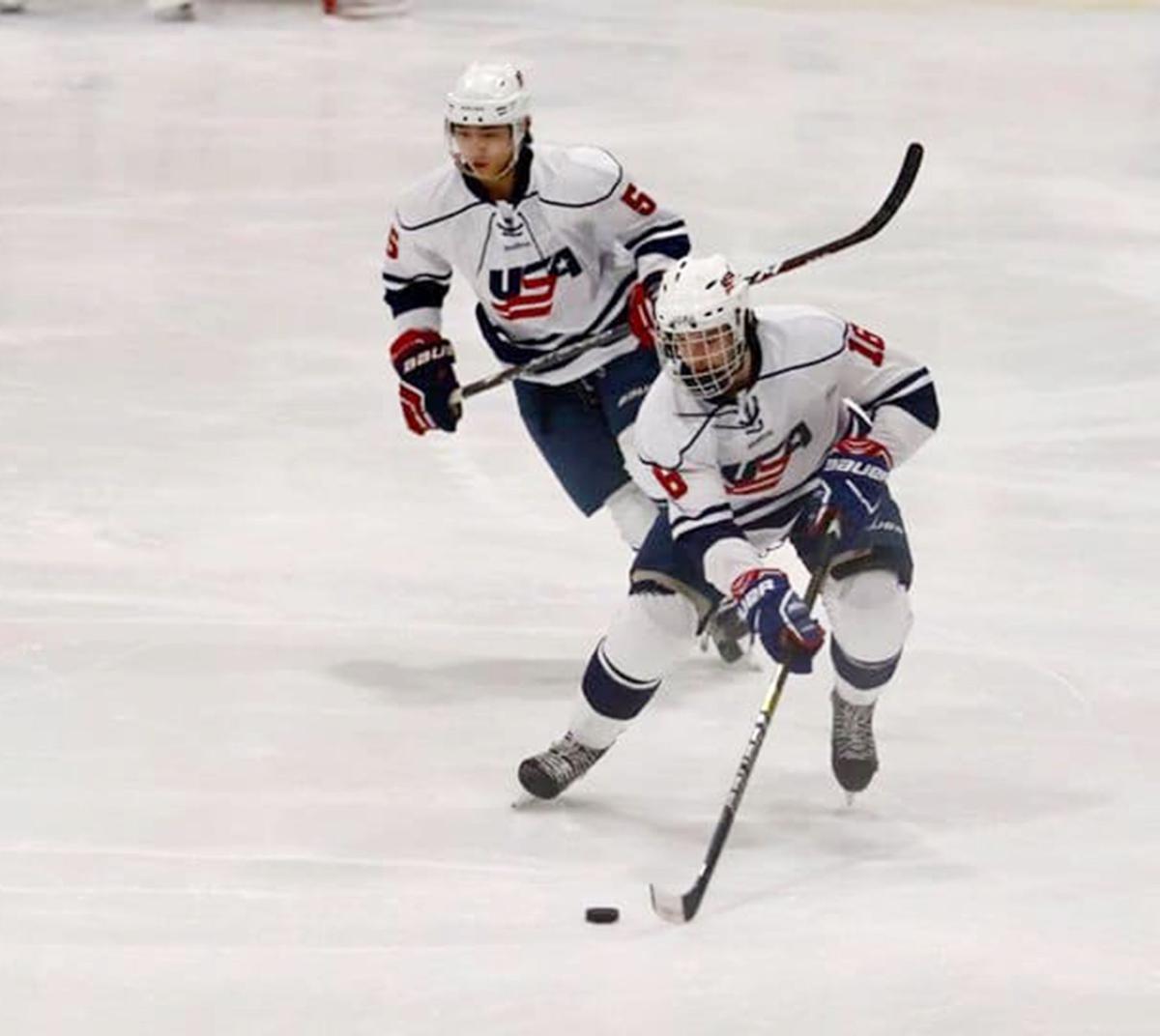 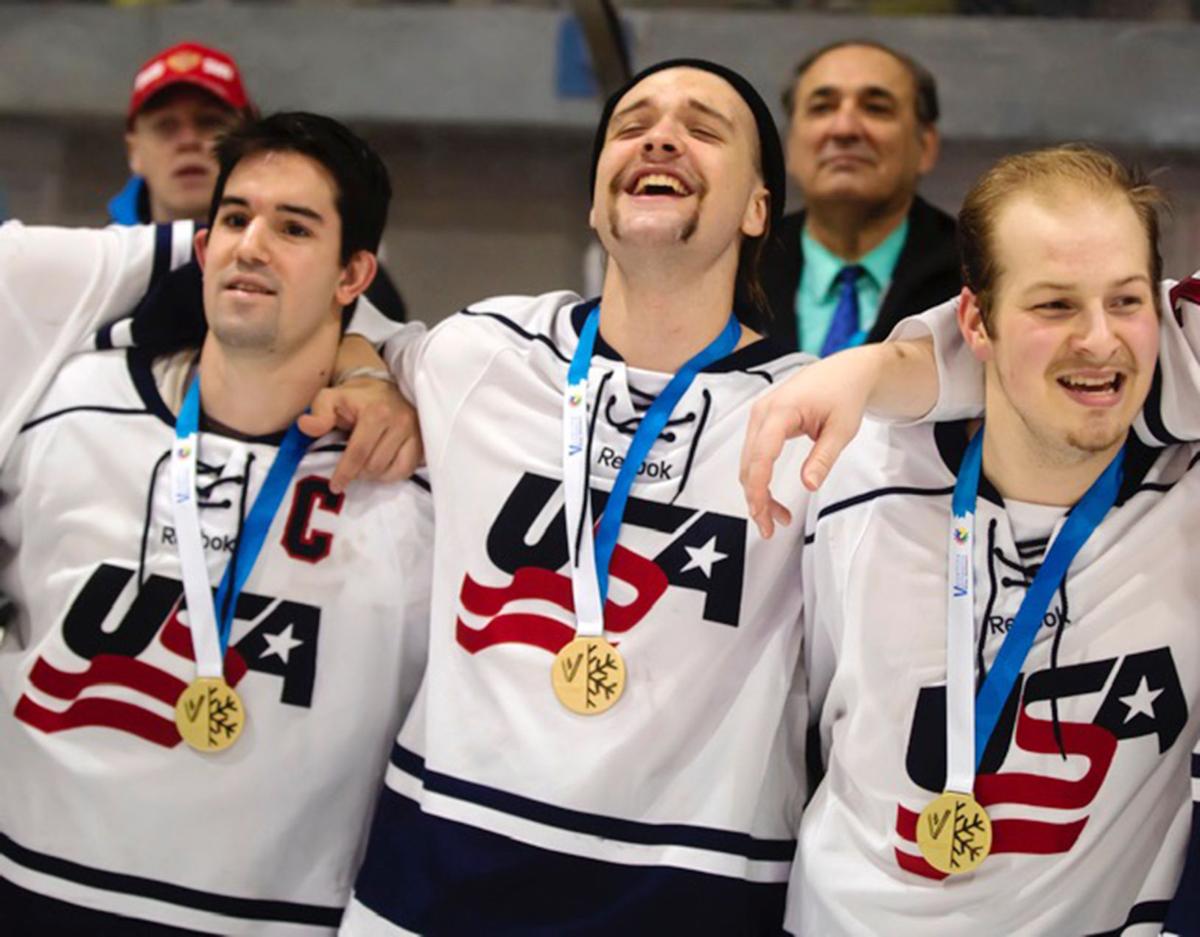 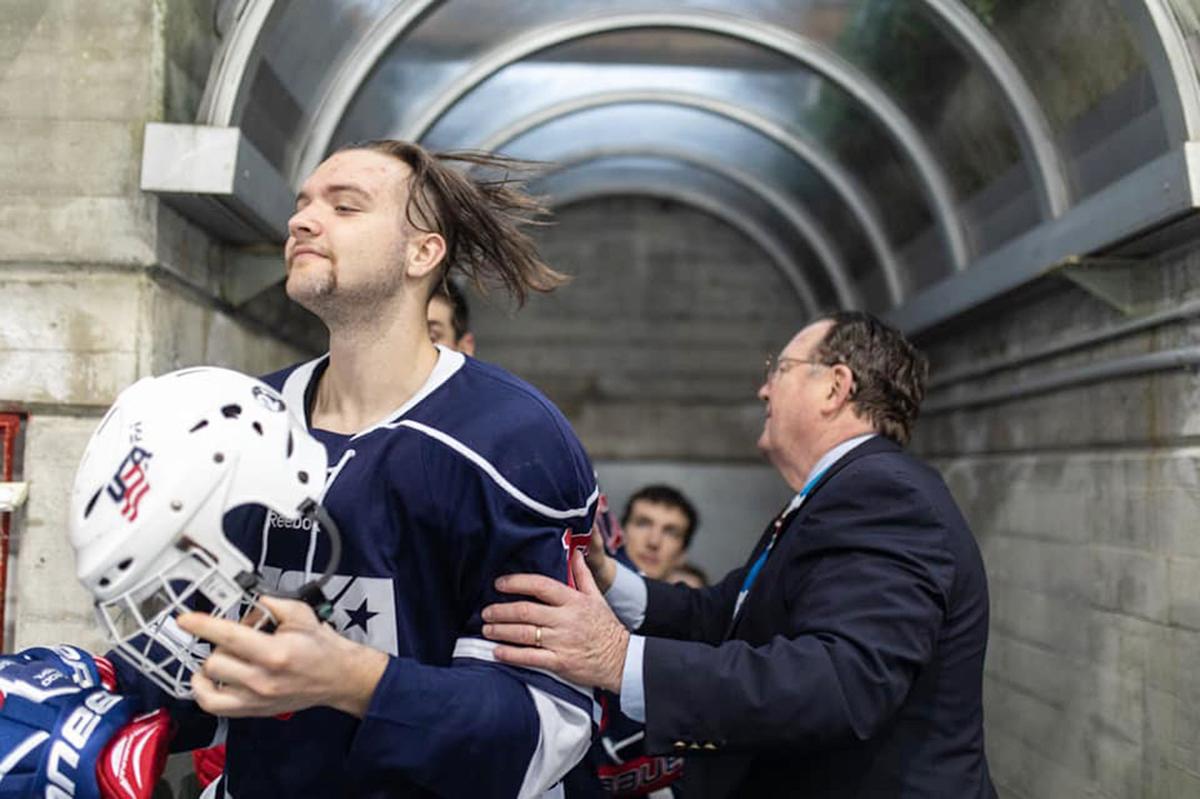 Anders Lindgren, a member of the U.S. Men’s National Deaf Ice Hockey Team, competed in and won a gold medal during the 19th annual Winter Deaflympics. To qualify for the Deaflympics, athletes must have a hearing loss of at least 55 dB in their “better ear” and are tested before hitting the ice. 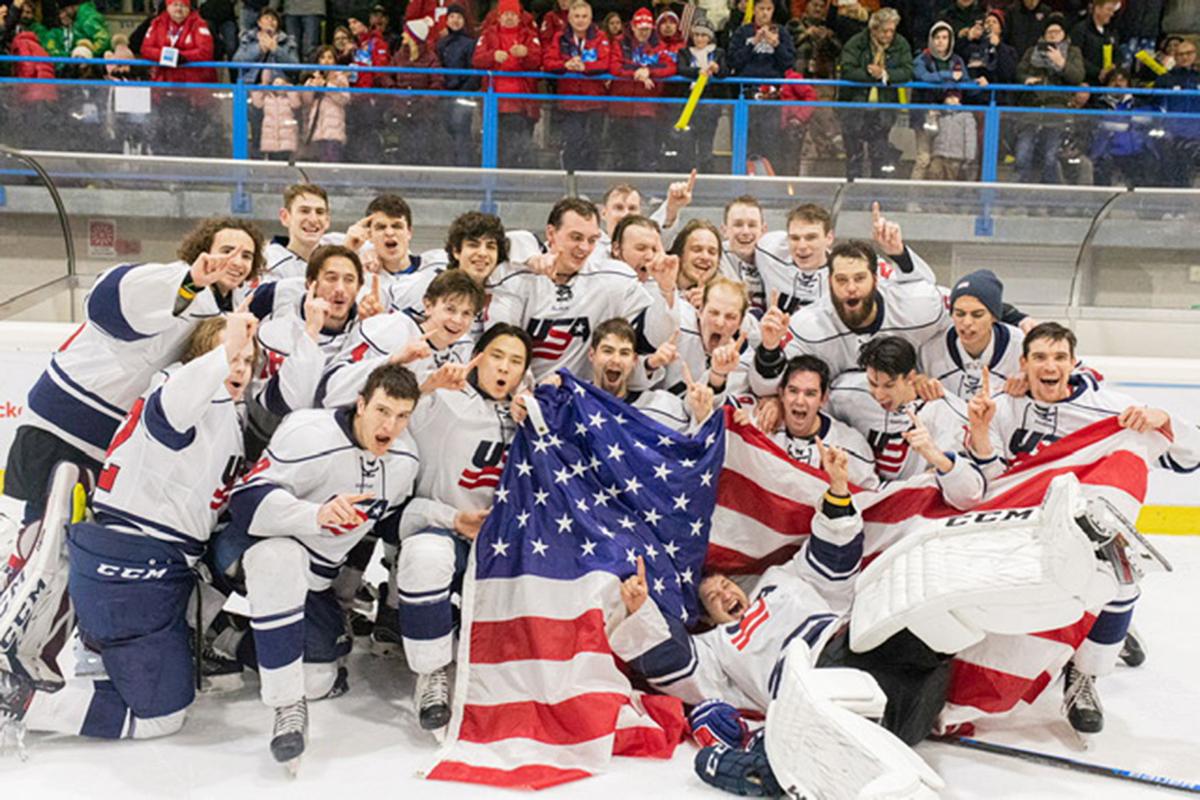 Anders Lindgren, a member of the U.S. Men’s National Deaf Ice Hockey Team, competed in and won a Gold medal during the 19th annual Winter Deaflympics.

Anders Lindgren, a member of the U.S. Men’s National Deaf Ice Hockey Team, competed in and won a gold medal during the 19th annual Winter Deaflympics. To qualify for the Deaflympics, athletes must have a hearing loss of at least 55 dB in their “better ear” and are tested before hitting the ice.

Anders Lindgren, a member of the U.S. Men’s National Deaf Ice Hockey Team, competed in and won a Gold medal during the 19th annual Winter Deaflympics.

In the gold medal game, the U.S. team beat Canada 7-3. Along the way, the team also won in round robin play over Finland, 6-2; Kazakhstan, 14-0; and Russia, 7-3. They suffered their only round robin loss to Canada 1-4, the day preceding the championship game.

In the gold medal game, the U.S. team took a decisive lead in the second period going up 4-1. Lindgren, a center, helped his team on its way to victory as he scored twice in the third.

Overall, Lindgren finished second on Team USA with four goals and four assists for a total of 8 points.

“Scoring twice in the gold medal game was one of the best experiences ever,” Lindgren said. “I’m huge into my faith, so going into this game I was trusting that God would work out my shooting because it had been inaccurate all week.

“I broke the last two sticks I brought to Italy during that game, and I had to borrow a teammate’s stick,” he said. “I went out and scored a goal using someone else’s stick. God performed a miracle on that one. The two goals I scored were the fourth and fifth goal of the game putting us up 5-1 and really separating the margin against Canada. This was such a good feeling, especially since we lost the previous game to Canada.”

Winning a gold medal seemed like “a daze” for Lindgren.

“I was so excited and on complete adrenaline that I do not remember much,” said Lindgren. “My body was shot — I took a knee-to-knee earlier against Russia, had massive bruises on my thighs from shots and everything ached.”

“But when that buzzer rang, I don’t think I have ever skated so fast to the goalie. And after that, I do not remember much except singing to ‘Party in the USA’ and ‘We are the Champions’ countless times.”

“As one of seven rookies added to Team USA, Anders had big skates to fill in with the departure of Bo Ruef from the top line,” said head coach Joe Gotfryd. “He solidified the line by playing center between the dynamic duo of Peter Gintoli and Derek Struwing.”

Lindgren credits his coaches with the team’s success as well as former Deaflympics head hockey coach Jeff Sauer, who passed away in 2017.

“[Coach Sauer] always said, and we still live by as a team, ‘You don’t have to win all the games, you just have to win the right ones.’”

Getting to the gold

Lindgren, son of Bjorn and Jodi Lindgren, was born with congenital bilateral hearing loss. He is 50 to 60 dB in each ear, meaning he’s just over half deaf in both ears.

But that never stopped him from loving and playing hockey. Anders played with the Kankakee Coyotes from fourth through eighth grade and then played for the Kankakee Irish as a high schooler, three years serving as team captain.

Today, Lindgren is a junior at Aurora University where he is studying nursing and plays on the school’s ACHA D2 hockey team.

Anders first learned of the Deaflympics team during the American Hearing Impaired Hockey Association (AHIHA) summer camp, a camp he has attended for the past 10 years.

Last year, he was invited to tryout for the team in Buffalo, New York — and made the team.

To qualify for the Deaflympics, athletes must have a hearing loss of at least 55 dB in their “better ear.” Hearing aids, cochlear implants and the like are not allowed during competition to ensure that all athletes play on the same level.

“I am roughly half deaf in both ears which means I am always between 50 and 60 decibels. The higher the decibel the worse the hearing.”

“As we were headed to get our credentials, I’m told they want to retest me with their equipment. I go in for the test and I pass it,” said Lindgren. “I need to get a 55 or better and I get a 52, three decibels off. I was told to retest the next day.”

“I needed to fail this test and I was honestly really shaken up. Was my hearing going to be the reason that I could not play in this tournament? So I struggle with the fact that all I have to do is not raise my hand when I hear the beeps, but that isn’t integrity,” said Lindgren.

“Being a Christian, I go to God and ask him for guidance. He gave me a verse “ill gotten treasure has no lasting value,” basically saying a gold medal won in a shady manner has no lasting value. I went in the next day to take the test and I feel that I can hear even more beeps from the day before. I was devastated.”

“But the beeps stop, the doctor says nothing and my stomach is twisting from the inside out. She hands me my credentials. I did not get a 55 or higher,” said Lindgren. “This was the second coolest part of my trip because it made me realize that when we live our life in integrity, in doing the right thing, doing God’s thing, he blesses us and has the best for us.”

“The rest of the trip I was so encouraged playing because I knew I wasn’t sneaking out there. I belonged. I did it the right way and it made everything so much better,” he added.

“In addition to being one of the hardest workers on the team, you never see Anders without a smile,” said Coach Gotfryd. “We look forward to having Anders as part of future international teams.”

General manager Richard Dumas added, “I can’t say enough about our players and how quickly they came together as a team. From the first game on, they played at a high level and demonstrated their will to do what it took to win. It was a tremendous honor to represent the U.S. and to return home with a gold medal.”