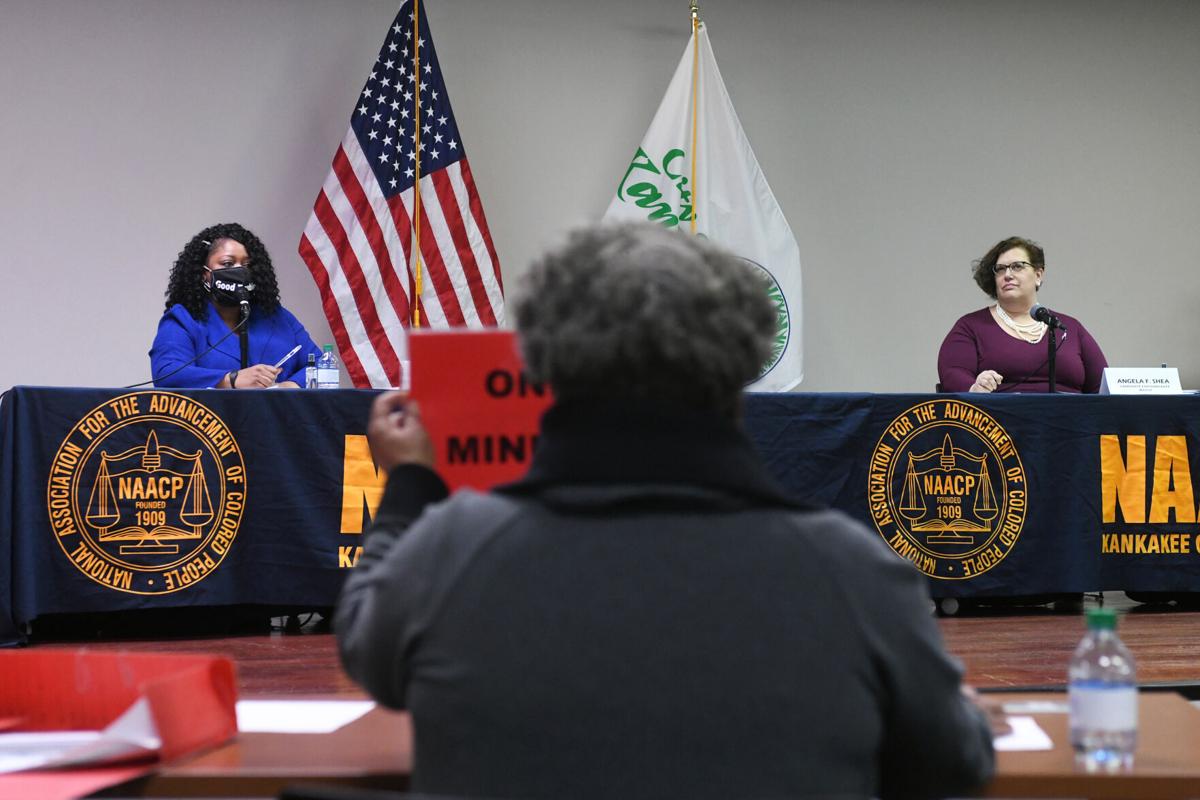 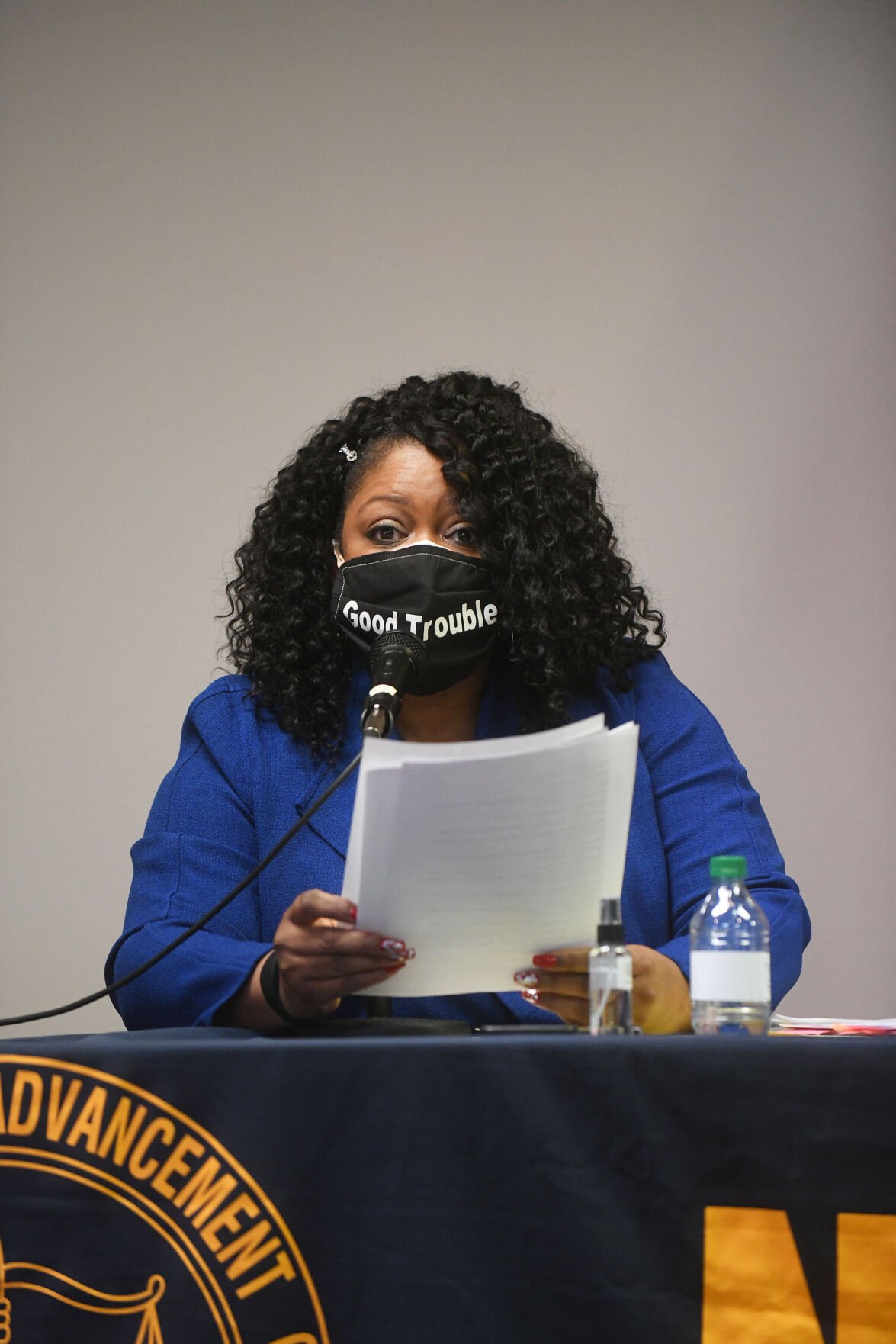 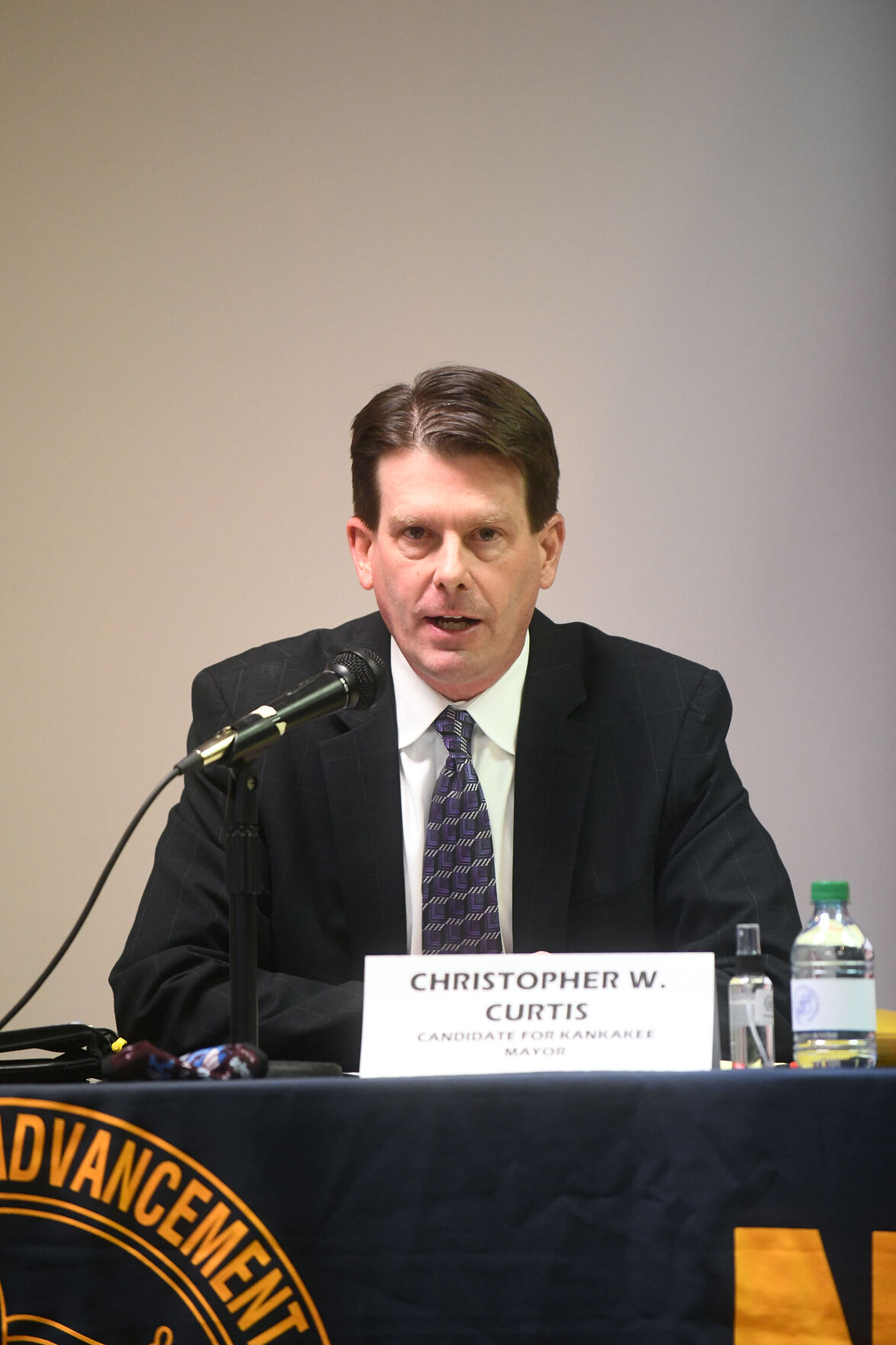 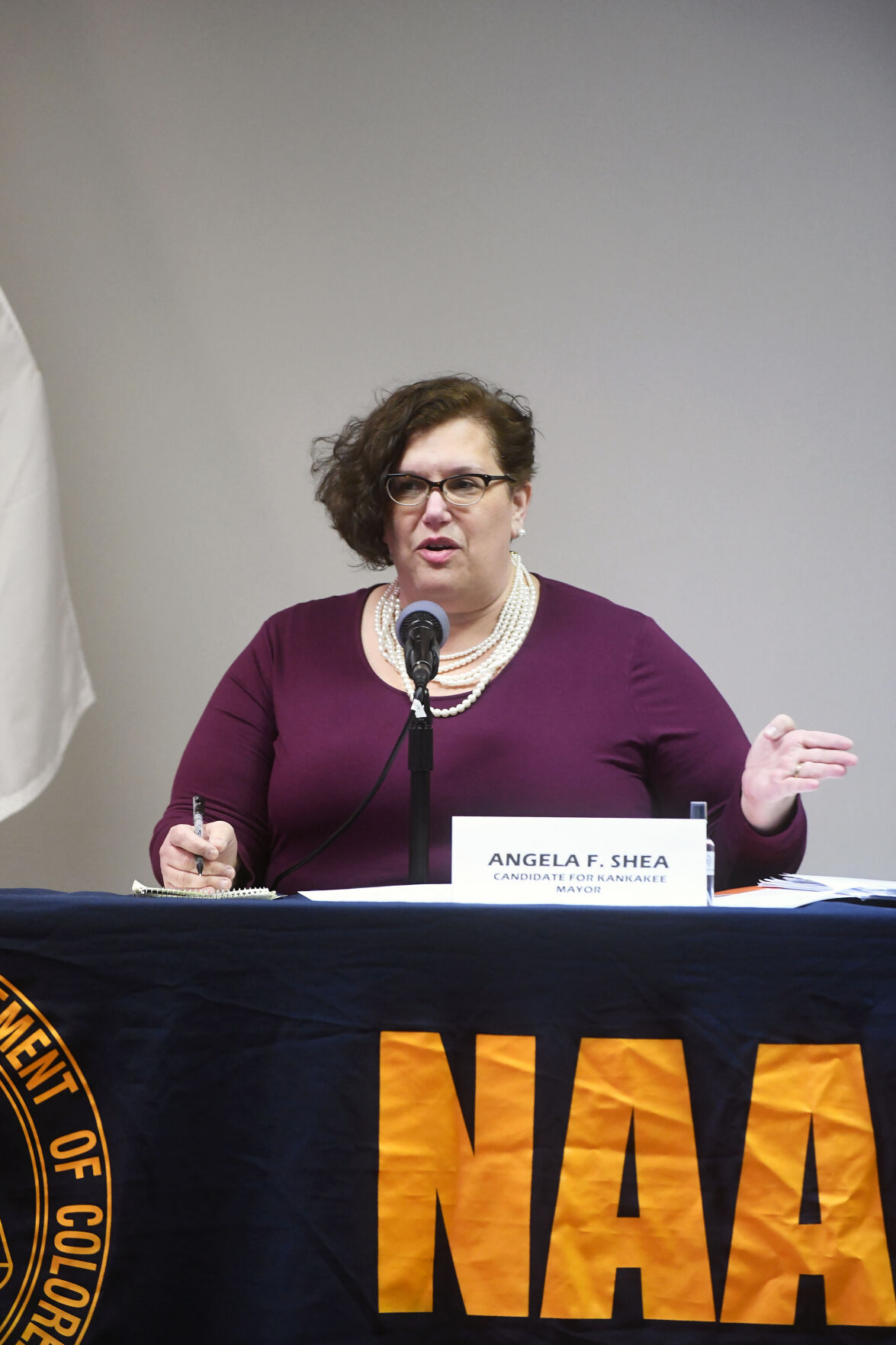 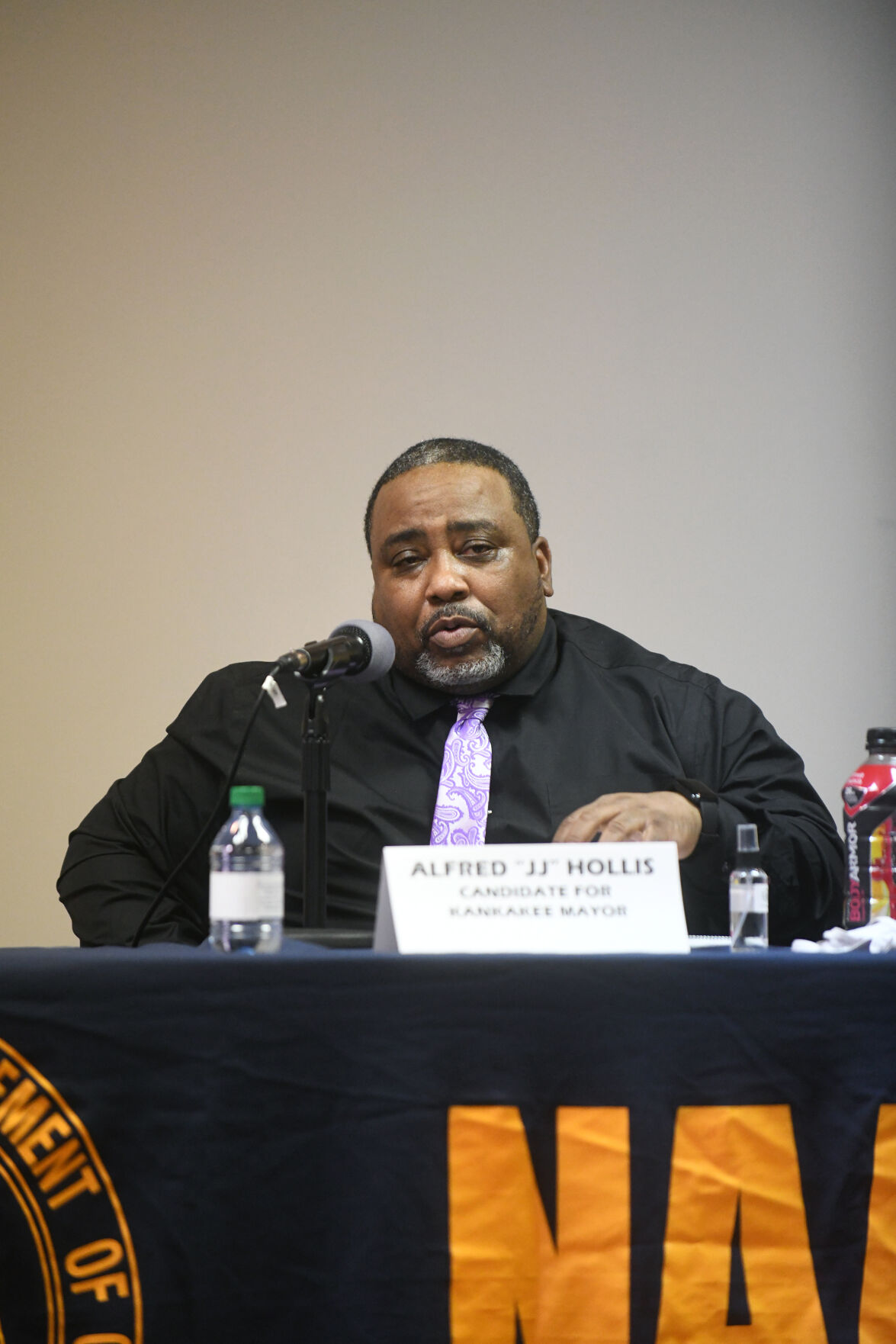 With the Kankakee primary election less than four weeks away, the mayoral candidates faced one another for the first time Thursday and stated their views on a variety of issues. Democratic Party candidates — first-term Mayor Chasity Wells-Armstrong and Kankakee School Board member Angela Shea — stated their case in the head-to-head forum hosted by the Kankakee County Branch of the NAACP.

What follows are excerpts from responses to questions posed during the Thursday’s candidate forum. The debate can be viewed in its entirety at the Kankakee County NAACP Facebook page and the Kankakee Public Library YouTube channel.

Would you support a referendum to regain Home Rule status if it’s lost due to decreased population?

Wells-Armstrong: “It is my understanding we do not automatically lose [Home Rule] based on the census count.” By that, the Home Rule authority would have to be challenged. But if Home Rule was lost, she would support a referendum to regain it.

Shea: It is too early to know what may happen with the city’s count. “The census everywhere has been undercounted. I would like to see a recount. ... This would have a serious impact on our autonomy. But the first step would be to challenge the census count.”

Curtis: “It’s very important to Kankakee. My quick answer is yes. We need [as a governmental body] to be nimble and quick. But the question is ‘why are we having such a low count?’ Why didn’t we go door to door?”

Hollis: “It’s very important to support this. It allows us a lot of funding sources. What we should have done for the census was have a big social medial push. Right now we are in trouble.”

Do you support the Riverwalk development project and what are your thoughts on what’s been accomplished so far?

Wells-Armstrong: The Kankakee River is one of the cleanest rivers and has long been an underutilized resource. She noted it has been one of her top focuses and that Shea has switched her views on this matter. “The riverfront is not developed in a year. Mechanisms are being put in place to get his developed.”

Shea: “Our river is one of our greatest assets. Developing part of the riverfront is a wonderful idea. But they have spent about $800,000 at this point and there is nothing to show yet. They need to slow our roll on this and focus” on other pressing needs.

Curtis: “I don’t support the way the city is going about it. Thus far it’s all on the back of Kankakee taxpayers. How much has been raised privately? I think right now it’s zero. Nothing has come out of the ground. We need to start with small baby steps.”

Hollis: A member of the park district board, Hollis noted much of the riverfront property is owned by the park district. He supports the development effort. “This is not just the city, but the entire area. We have not tapped into this resource enough. [The Riverwalk] is a great idea. I like a lot of the things discussed.”

With 4 shootings in the past two weeks, what is the solution to the city’s crime problem?

Wells-Armstrong: “Violence is a complex issue. We’ve seen disinvestment” due to violence. “[Police Chief Frank Kosman] has redirected resources to address crime.” She said her administration has also started youth mentoring programs and helped established the Strong Neighborhood house along East River Street in the 2nd Ward to help the youth. “We are continuing to ask for community support.”

Shea: “I wish there was an easy answer. We have to do better with police department.” Officers need to be reassigned to areas or units where problems exist.” More patrols are needed. She wants to see policing efforts stepped up on the weekends as well.

Curtis: The first issue raised at City Hall each day must be finding solutions to violence, specifically gun violence. “How do we slow down gun violence? We must catch the small group [of offenders] destroying life for the rest us.” The city’s nuisance abatement ordinance must also be used more.

Hollis: “We have to start at ground zero. What is the root of the problems in these houses. We need to get directly to the problem. The police are sitting back and not acting. We have to be more proactive.”

How can the city attract new residents?

Wells-Armstrong: “We should all be cheerleaders. We have worked on our amenities. That’s why we worked on the downtown streetscape.” Different types of housing need to be developed because not everyone wants to own a house. That’s a chief reason why development along the river is so crucial. A riverwalk provides something no other community has.

Shea: “We have to work on our entrances and make them more appealing. We need to be looking for new residents. We should be working with [large employers] Riverside and CSL and showing their new employees our city.” Kankakee schools take new teachers on a tour of the city to show them the neighborhoods. “Show them what we have to offer.”

Curtis: “We have to keep real estate taxes low. We must be fiscally conservative so our taxes stay low.” Better code enforcement is needed and he’d like to investigate a program to give vacant lots to neighbors to use for gardens or simply for larger yards. This solution would mean the city would have far less lawns to mow during the summer. “And it would add value to local homes.”

Hollis: More living-wage jobs would help. He also pointed to areas of decay which have been allowed to remain for years. “Exit 312 [East Court Street at Interstate 57] is a blight to our community.” Someone new entering the city could look at this and turn around. “We have to attract people with better housing and provide resources.”

As the Hispanic populations grows, how would you reach out to foster Hispanic inclusion?

Wells-Armstrong: City information on the website is translated into numerous languages. Appointments on various city groups have often been filled with minorities. “It’s their community, just like it is ours.”

Shea: Hispanics have traditionally been underserved. “They just want to be listened to.” With the schools, Hispanics let leadership know what they need. “We need to bring the Hispanic community in more. ... More can be done.”

Curtis: Twenty percent of the city’s population is Hispanic and they must be brought into the fold so “we can meet one another and get to know them.”

Hollis: “We have to encourage them to get involved. We need them to become aldermen and join some of these boards. We encourage their leadership to become involved.” By becoming part of the city’s fabric, they will become better, more involved citizens.

There will be not be an independent investigation into campaign donations for Kankakee Mayor Chasity Wells-Armstrong.