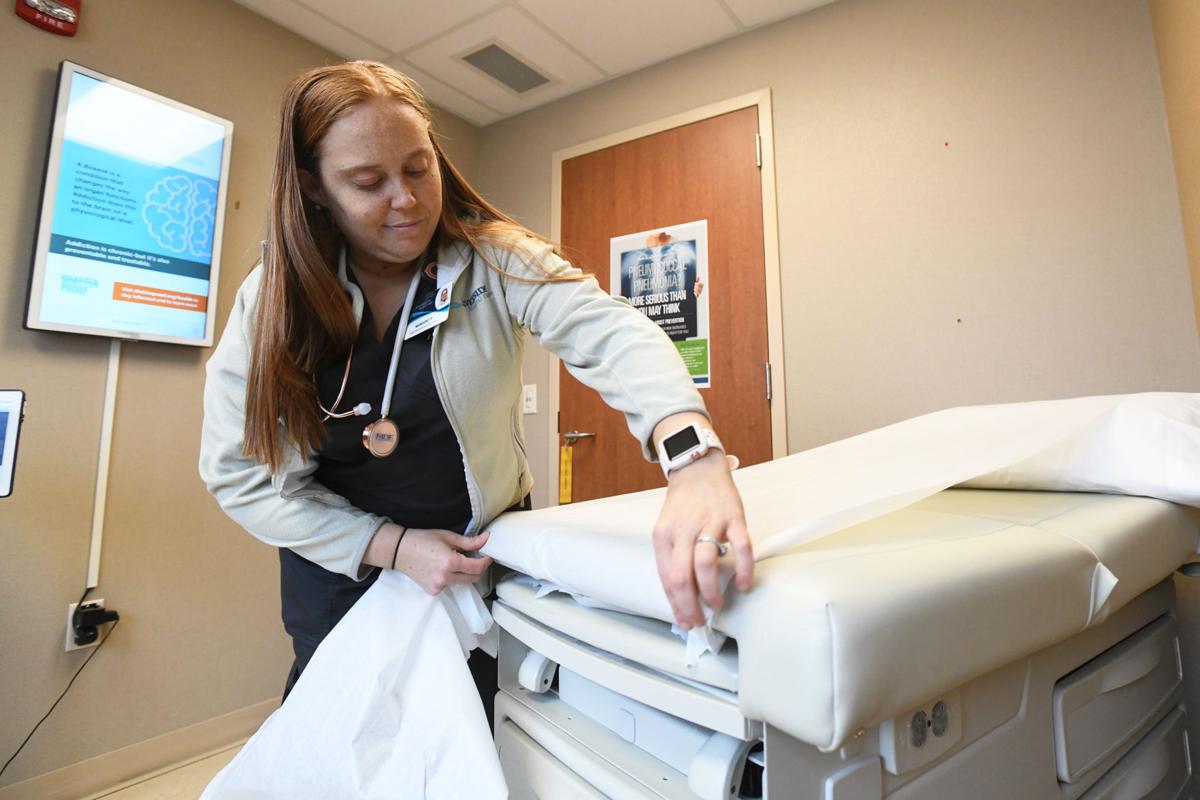 Margaret Hiland, of Manteno, returns to work at Riverside Primary Care after an appointment for a Belatacept infusion, an effort to help maintain her current kidney health and prevent organ rejection while she waits for a transplant. 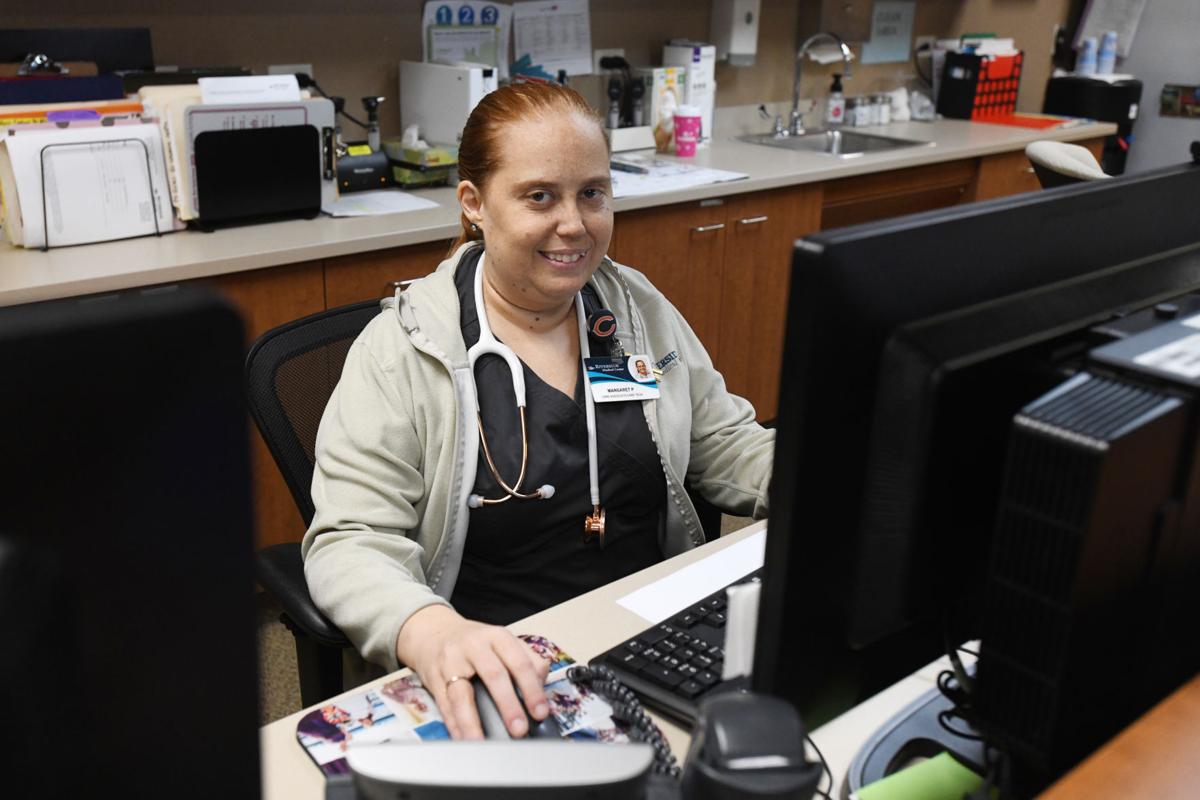 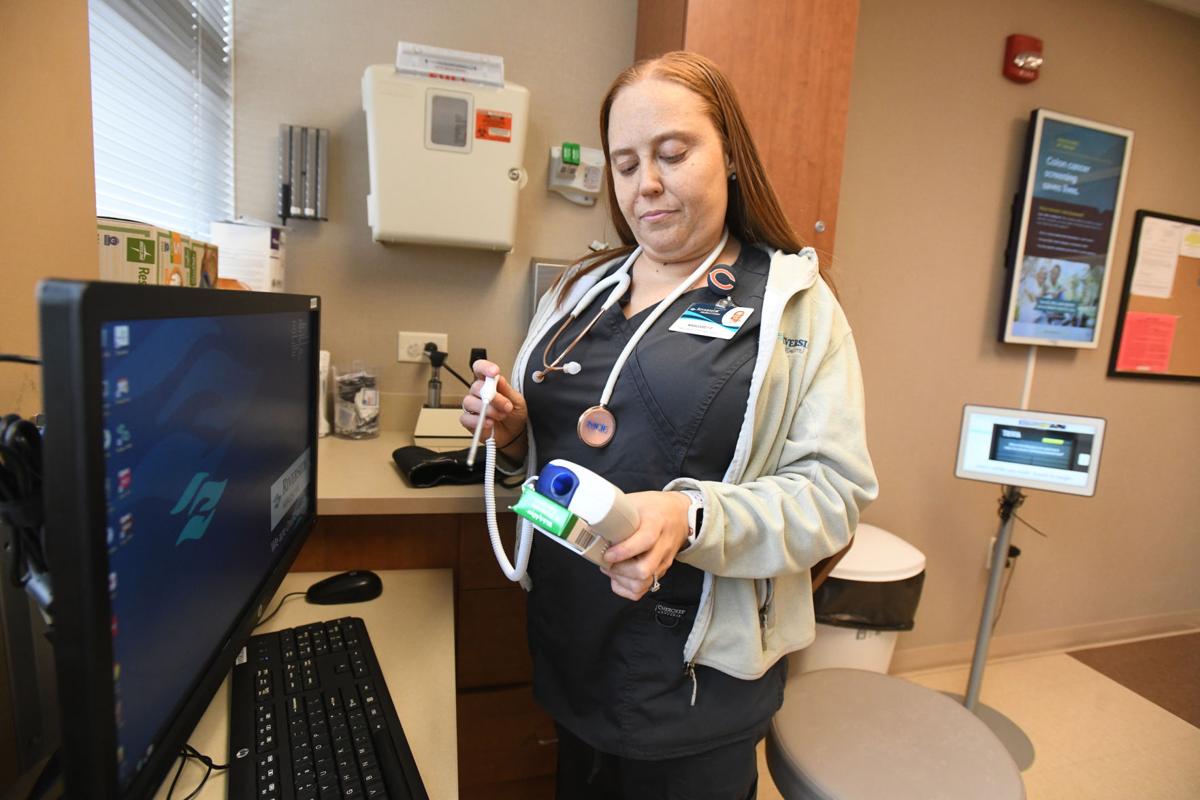 Margaret Hiland, of Manteno, returns to work at Riverside Primary Care on Tuesday after an appointment for a Belatacept infusion, an effort to help maintain her current kidney health and prevent organ rejection while she waits for a transplant.

Margaret Hiland, of Manteno, returns to work at Riverside Primary Care after an appointment for a Belatacept infusion, an effort to help maintain her current kidney health and prevent organ rejection while she waits for a transplant.

Margaret Hiland, of Manteno, returns to work at Riverside Primary Care on Tuesday after an appointment for a Belatacept infusion, an effort to help maintain her current kidney health and prevent organ rejection while she waits for a transplant.

MATENO — The holiday season is filled with an abundance of gifts, once-in-a-lifetime donations and yes, even miracles. That’s want Manteno resident Margaret Hiland, 33, is counting on.

To date, Hiland has undergone nearly 30 surgeries and is in need of one more — a third kidney transplant.

Hiland was born with spina bifida, a birth defect that occurs when the spine and spinal cord don’t properly form. Minutes after birth, she was airlifted from South Suburban Hospital to Children’s Memorial Hospital in Chicago, where she underwent her first spine surgery.

Her parents, Debbie and the late Scott Plesniak, were not even able to hold their daughter until she was almost 2 months old.

From birth, Hiland has undergone numerous spine surgeries to push her spinal cord back together and several knee surgeries because of her bones breaking down.

She learned to walk at age 2½, but Hiland says, her biggest complication was her spine growing around her bladder, causing damage to her kidneys.

“My parents wanted me to grow up normal but also put a bubble around me. I wanted to fit in,” Hiland said. “I played softball and tried dance. But it was too hard physically.”

And much of her youth was spent in and out of hospitals.

“I saw the leaves change for the first time when I was 14. When I was in the hospital in Chicago, all I saw out the window was tall buildings,” she said.

“Driving home that fall, I thought something was wrong with my eyes. I had never seen fall,” she added. “To this day, fall is still my favorite season.”

And while most of her surgeries during her youth were related to her spine and knees, by the time she was in high school, she needed a kidney transplant.

She underwent her first kidney transplant in 2002 and after the long recovery process, she went through dialysis.

“I was on dialysis for five hours each time and then drove myself to school,” said Hiland, something she did for eight months.

“After the transplant, I had more energy. I started doing normal things,” Hiland said, adding that she also was no longer limited to her strict kidney failure diet.

Hiland, who is Italian and Polish, was able to eat tomatoes and mozzarella cheese again.

And while Hiland was optimistic about the outcome of the transplant, her new kidneys only lasted two years.

“I started having trouble breathing and my legs were swollen. I went to the doctor, had lab tests done and was sent to the hospital. My kidneys were failing. The doctors don’t know why,” Hiland said. She went back on dialysis.

In May 2006, she got the phone call she had been waiting for — a match had been found.

After her second transplant surgery, she was put on a new medication, Rapamune, to help her body accept the new organs as if they were her own.

“It was the only pill I had to take. With the Rapamune, I was only on one drug each day instead of 15,” Hiland said.

But in 2015, a biopsy showed scarring on her kidneys. From that time forward, any flu like symptoms brought her to the doctor’s office as a precaution.

“Seven months ago, I wasn’t feeling too good,” she said. “I went to the doctor and was back in the hospital.”

She now is back on a strict kidney failure diet to avoid dialysis and has returned to taking her regular medications. She also undergoes belatacept infusions every two weeks to maintain her kidney function as its present state.

“I have taken care of my transplant for a successful 13 years,” she said. “Sadly, that is coming to an end. I need a new kidney.

“I’m battling for a miracle to find a kidney match for the third time,” Hiland said.

But she added, “I still try to live a normal life. I don’t focus on how I’m feeling. I just keep on going.”

And she is going and going — working full time and enjoying being a newlywed.

Hiland works full time as a care technician at Riverside Primary Care in Bourbonnais. Spending most of her youth in and out of hospitals, she knows firsthand how important it is to help others through their healing process.

Just last year, she married Jay, whom she met five years ago. Even while working full time and constantly dealing with fatigue, she still finds time for her passion — cooking. She continues to cook dinner every night.

“Jay doesn’t see me as sick,” she said. “I know he’s very worried and concerned. But he’s very supportive and a very positive person.”

For the future, Hiland still thinks about returning to school be a nurse.

“As a kid, I missed school a lot,” Hiland said. “That’s the hardest part of all this, not going to college.

“I know what I am and what I’m not capable of. I know I wouldn’t be able to finish school. There have been too many surgeries. I think about it a couple of times a week. It’s heartbreaking,” said Hiland.

In addition to school, she also has hopes of starting her own family.

“I’ve put faith in that there’s something better coming. I want to have a family, whether it’s adoption or a surrogate,” Hiland said. “God wouldn’t have given me Jay if I wasn’t meant to be a mom.”

But to fulfill her future dreams, she needs another kidney transplant. Hiland is on an organ donation waiting list and is part of the University of Chicago Medicine’s Transplant Center Living Donor Champion Kidney Swap program.

To learn more about the Kidney Swap program and becoming an anonymous donor, call 773-702-0620.