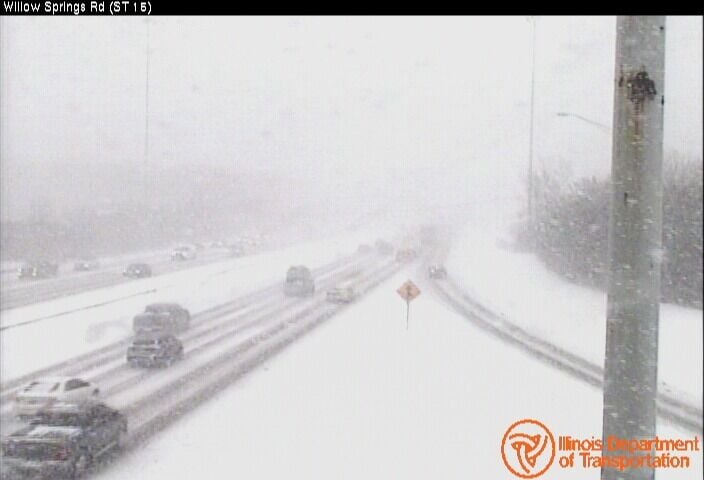 A shot of Interstate 55 in Cook County around 3 p.m. Monday from the Illinois Department of Transportation.

A shot of Interstate 55 in Cook County around 3 p.m. Monday from the Illinois Department of Transportation.

“Roads are an absolute mess just about everywhere,” the Illinois Department of Transportation said in a post on its Facebook page.

That sentiment was a common theme across the social media platform as the snowstorm raged on into the evening hours Monday.

The National Weather Service forecast called for 6 to 9 inches for the Kankakee area. By 10 p.m., weather spotters were reporting online that just under 9 inches had fallen.

The snow fell so fast that plows were fighting a losing battle to keep the roads clear. As the day turned to evening, some areas suspended towing until conditions improved because of safety concerns. IDOT reported late Monday evening that the state plows would push on.

In Bourbonnais, village officials reported around 8 p.m. that one of its plows was in a ditch due to an accident caused by whiteout conditions. It was many slide-offs reported in the county. Illinois State Police District 21 Ashkum reported that troopers worked numerous slide-offs and crashes as well.

“But we cannot stress enough: Tonight is not the night to be driving. Conditions are treacherous and could become dangerous if your find yourself stranded,” was the warning from IDOT’s Facebook page.

“I know that many of you think traditional snow days are a thing of the past, but yes they do exist,” St. Anne Superintendent Charles Stegall said in a message to parents posted to the district’s Facebook page. “There will be no remote learning for students and no remote planning for staff. Drink some hot chocolate, play board games and stay safe and warm.”

At 6:19 p.m. Monday, the Kankakee Fire Department was dispatched for a report of an oven fire at an apartment in the 200 block of West Crestlane Drive.

The fire was extinguished before firefighters arrived. It is believed the apartment occupants were using the oven to stay warm, according to radio communications.

The polar vortex got in one more snow blast in the area.