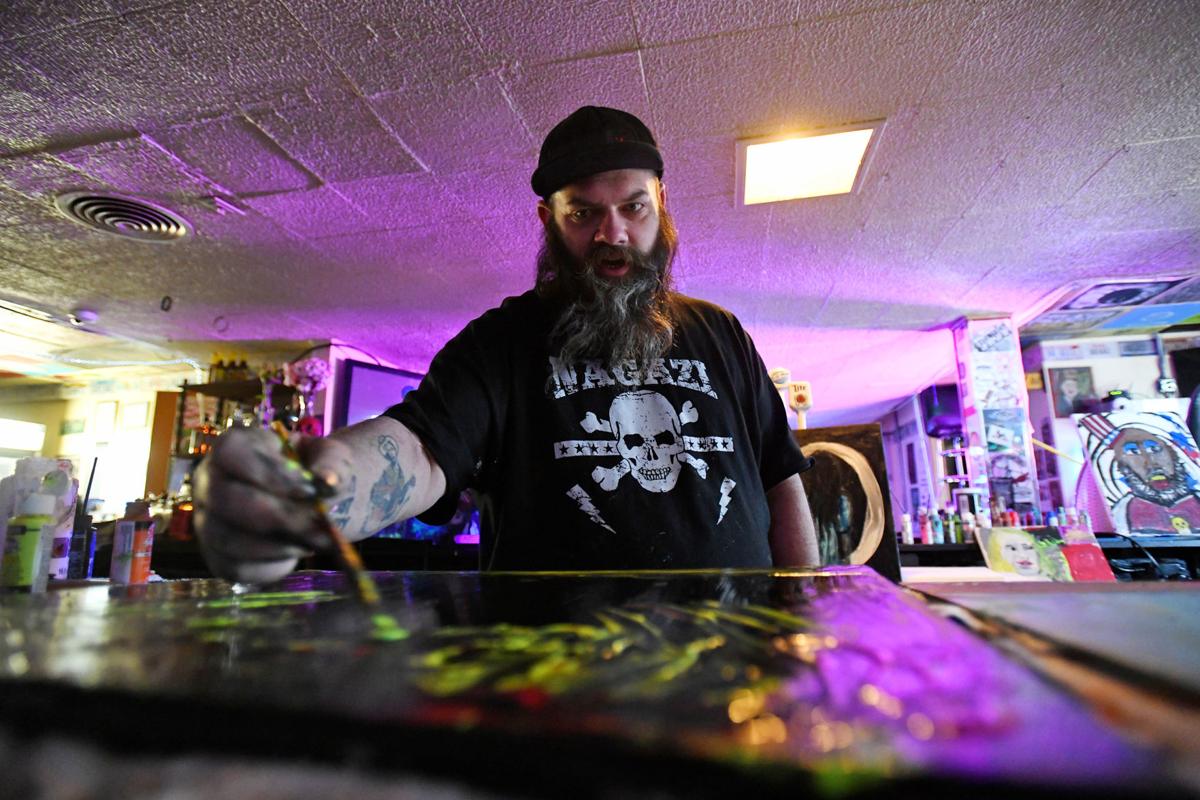 Nick Huffman, co-owner of The Looney Bin, paints on Tuesday afternoon as part of his fundraising effort to help his 11 employees now out of work at the Bradley bar and venue. 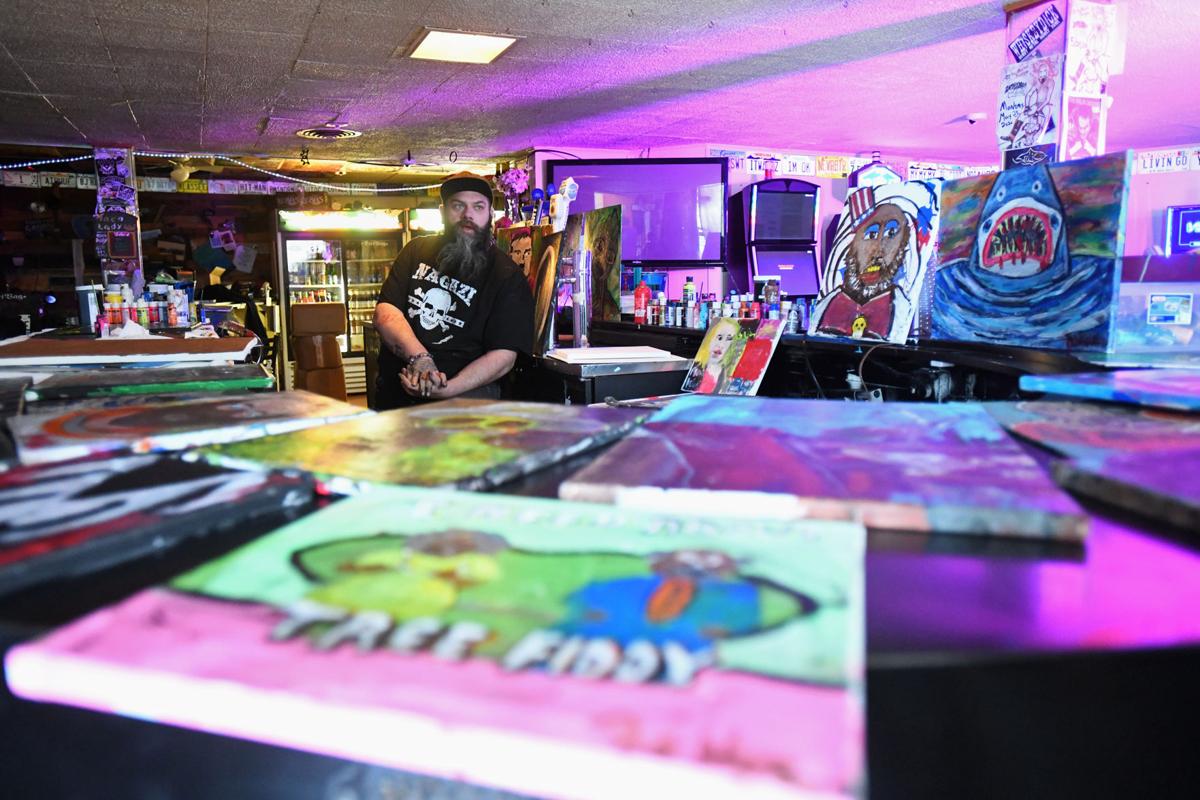 Surrounded by his paintings for sale, Nick Huffman, co-owner of The Looney Bin, talks about the impact of the coronavirus closures Tuesday afternoon. Huffman, who picked up painting a little more than 4 years ago, decided to put all his paintings up for sale as part of a fundraising effort to help his 11 employees now out of work at the Bradley bar and venue after coronavirus restrictions required many local bars to close their doors.

Nick Huffman, co-owner of The Looney Bin, paints on Tuesday afternoon as part of his fundraising effort to help his 11 employees now out of work at the Bradley bar and venue.

Surrounded by his paintings for sale, Nick Huffman, co-owner of The Looney Bin, talks about the impact of the coronavirus closures Tuesday afternoon. Huffman, who picked up painting a little more than 4 years ago, decided to put all his paintings up for sale as part of a fundraising effort to help his 11 employees now out of work at the Bradley bar and venue after coronavirus restrictions required many local bars to close their doors.

The Looney Bin in Bradley sits empty of patrons, shut down by the state’s “stay at home” mandate to help combat the coronavirus.

In a dimly lit bar area, co-owner Nick Huffman is working to shed light on a dark period that will eventually arise back to some sense of normalcy. He found out four and half years ago that he liked to paint and continues to paint pieces that he’s now selling to benefit his furloughed employees.

“I figured I’m here for them. Their hands work for me year-round, so mine need to work for them until they can, until they’re OK,” said Huffman in between strokes of his latest creation — a painting of KISS in concert.

“I still don’t necessarily know that I know what I’m doing,” said Huffman, who’s had no formal art training. “I just kind of figured out a way to figure it out as I go.”

He’s armed with acrylic paint, a canvas and variety of paint brushes. It’s an idea one of the bartenders had to replace broken ceiling tiles above the stage by overzealous guitarists.

“Some would get excited and throw a guitar up into the ceiling or whatever,” Huffman said. “The problem with the ceiling tiles was they were all painted and sealed. If we were to replace one, it would be a different color because of the paint seal.

“One of the bartenders had an idea that if all of us were to paint a ceiling tile individually, plus the bands who came through and people in the community, whoever, it would look neat. They’d each be like their own canvas. I thought, ‘That’s a really good idea.’”

After a few weeks, Huffman, 40, was the only one painting, and he hasn’t stopped since — 54 months and counting.

“Somewhere along that line, I kind of picked it up as a habit, I guess,” he said. “At some point, I got better I guess. I still have no idea what I’m doing.”

He’s accumulated 70 paintings, and they’re filling his bar instead of customers.

“Let’s make good of it,” Huffman said. “So I decided if we’ve got to be closed down, the Taco Lady [food sales service] is still here and somebody needs to be around in case she needs anything. … I figured if I’ve got to be here, I’m going to keep painting. I don’t put a price on any of them. It’s donation only. Whatever you think. You name the price as long as it’s enough to cover the canvas and the materials, obviously.”

All the proceeds go to his 11 part- and full-time employees, one of which has missed 16 shifts since the shutdown.

“I want to make sure they are taken care of,” Huffman said. “... With cash employees, they don’t have the same options. I hated the idea of my employees sitting at home, stressing over bills, stressing over money, having zero income. They couldn’t even tell me to get screwed and go get a new job. Because where? We’re on lockdown. They can’t get a job somewhere else. They can’t even job hunt to save the family.”

The Taco Lady kitchen inside The Looney Bin at 201 S. Schuyler Ave. is open from 11 a.m. to 9 p.m. or so, and Huffman is there painting. Anyone interested in buying a painting for a good cause can stop by during those hours.

Huffman paints “whatever pops into my head.” He’s got portraits of Johnny Cash, Cheech Marin of “Cheech and Chong” fame among others. He also has a painted guitar from an ax he bought from local musician Matt Shipley. It’s inspired by Pink Floyd’s “The Wall” album.

“He asked me if I knew anybody who wanted to buy a guitar cheap,” Huffman said. “It’s just a beginner guitar. I said, ‘Let me see it.’ So he came in with it, and he wanted like 50 bucks. … It’s the same body style that Dave Gilmour, of Pink Floyd, plays. I recognized it when I saw it. So we googled that just to make sure I was right. I hate to put a painting on there to be wrong. It’s a Pink Floyd, ‘The Wall,’ theme.”

Painting is also therapeutic for Huffman.

“I found that when I paint, my hands move but my head doesn’t think, ‘OK, grab little brush,’” he said. “I just do the same thing when I’m driving. … It’s the same thing but while I’m doing it, a lot of the problems I don’t know the answer to, I get stuck on, or it might have been on the tip of my tongue later and I couldn’t spit it out. One after another, the [answers] just come out. In doing this, I realize that at some point during the 300 tiles, it takes my mind to that same place that a vacation does.”

Huffman is going to keep painting through the shutdown that has also brought live music to a standstill.

“It’s outrageous,” he said. “I’ve never seen anything like this.”

Want to buy a painting?

Paintings can be purchased from 11 a.m. to 9 p.m. Monday through Friday at The Looney Bin, 201 S. Schuyler Ave., Bradley.

All proceeds go to the establishment's 11 part- and full-time employees who have been affected by the shutdown.