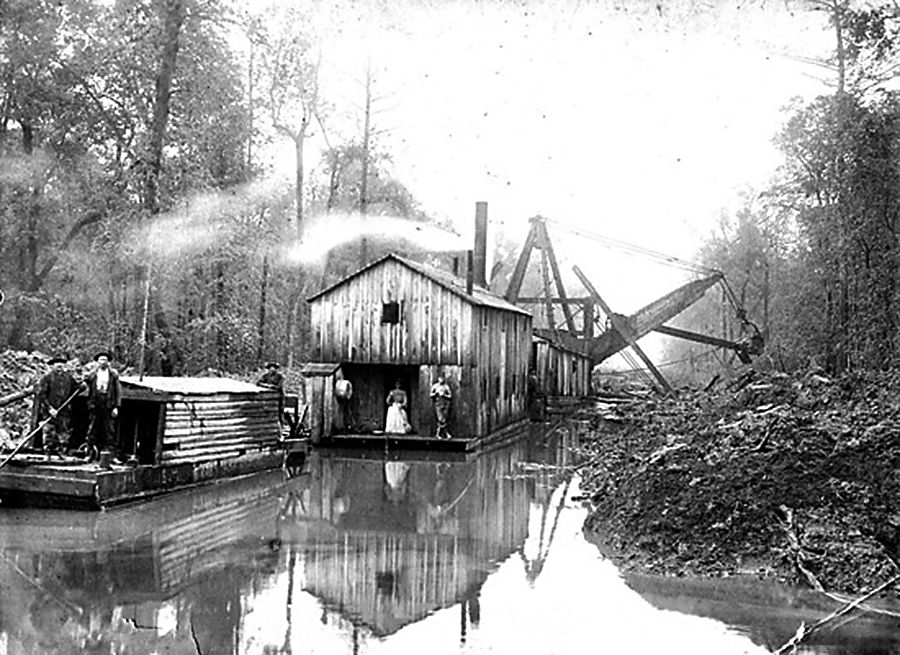 Huge steam dredges like this one were used, from the 1870s onward, to dig many miles of drainage ditches through the Grand Kankakee Marsh and to convert the meandering Kankakee River to a series of straight-line, canal-like ditches. 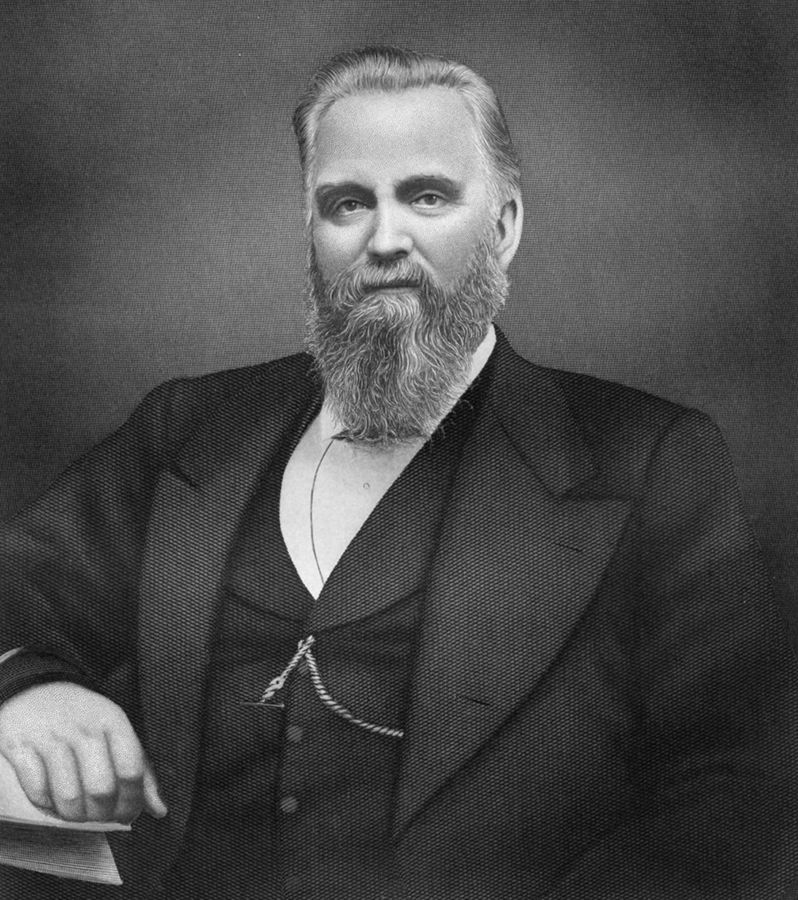 Lemuel Milk, of Kankakee, was a major landowner in the Grand Kankakee Marsh, with more than 10,000 acres on what had been the bed of Beaver Lake. He was instrumental in draining the remnants of that lake in the 1870s.

The abrupt change in the character of the Kankakee River at the Illinois-Indiana state line is obvious in this satellite view. In Indiana, at right, the river bed has been dredged and converted to a straight-line canal. At left, in Illinois, the river follows its natural meandering course.

Huge steam dredges like this one were used, from the 1870s onward, to dig many miles of drainage ditches through the Grand Kankakee Marsh and to convert the meandering Kankakee River to a series of straight-line, canal-like ditches.

Lemuel Milk, of Kankakee, was a major landowner in the Grand Kankakee Marsh, with more than 10,000 acres on what had been the bed of Beaver Lake. He was instrumental in draining the remnants of that lake in the 1870s.

The abrupt change in the character of the Kankakee River at the Illinois-Indiana state line is obvious in this satellite view. In Indiana, at right, the river bed has been dredged and converted to a straight-line canal. At left, in Illinois, the river follows its natural meandering course.

Editor’s note: This is the last of a four-part series about the Grand Kankakee Marsh.

“They murdered this land while they were at it, and made a good job of it!” was an agonized reaction to the draining of a wildlife paradise — the Grand Kankakee Marsh — and turning it into cornfields and cow pastures.

Those were the words of Austin Dexter, a “swamp rat” who grew up in the Kankakee marsh in the mid- to late-1800s. He was interviewed in the early 1920s by pioneer Kankakee historian and storyteller Burt Burroughs.

The murder of the Grand Kankakee Marsh actually was a slow death spanning more than a half-century. The crime was committed by a state government and groups of individuals eager to profit from reclaiming a “dismal wasteland” and converting it into farm fields that would yield a bountiful harvest.

The earliest efforts at draining the almost one-million-acre wetland were made in the mid-1850s, when landowners hand-dug channels to direct water into the Kankakee River. Most of the early ditching efforts were made at the eastern end of the marsh, which stretched along both sides of the river from South Bend, Ind., to Momence.

Frontier settlers saw the marsh as a dismal, unproductive wasteland; draining it to allow planting of crops was considered a benefit. One author wrote approvingly about an early landowner who “took the unproductive acres of the swamps, drained them, and brought them into cultivation.” Even the U.S. government approved; the federal Swamp Act of 1850 turned over wetlands to state governments, which could sell the land and use the proceeds for drainage projects.

In the 1870s and 1880s, drainage efforts were ramped up with the introduction of steam-driven dredges. The large machines were far faster and more productive than the hand-digging and oxen-drawn-plow methods used previously. They produced wider, deeper ditches, piling up the excavated material to form levees or road bases along the sides.

One of the earliest waterways dug by a steam dredge was the Singleton Ditch, begun in 1873. In Lake County, Ind., it runs parallel to and about one mile to the north of the river, crosses the state line, and empties into the Kankakee just east of Momence. During the late 1800s, literally hundreds of miles of similar ditches were dug through the wetlands on either side of the river.

“Reclaimed” swampland soon was producing bumper crops of cereal grains and vegetables, such as onions and sugar beets. While small farmsteads were common, most of the Grand Marsh was in the hands of large landowners, such as Chicago meat-packer Nelson Morris. He owned more than 25,000 acres, where he raised large herds of cattle brought to Indiana from Texas.

A related drainage project was Beaver Lake, located on the southwestern edge of the marsh, north of the town of Morocco. The earliest effort to drain the 16,000-acre lake was made by the Indiana state government in 1853. A ditch several miles in length was dug to connect the lake with the Kankakee River, but the results were disappointing: the lake’s shoreline receded by only about 100 yards.

During the next 20 years, further ditching efforts drained away most of the lake, leaving only a narrow body of water about two miles long and 800 feet wide. Kankakeean Lemuel Milk owned 10,000 acres of former lake bottom; his nephew, H.H. Cooley, owned about 4,000 more, including the remaining body of water. On Aug. 29, 1874, Milk and Cooley opened a deepened ditch, draining away the last vestiges of Beaver Lake.

The Grand Kankakee Marsh itself, however, still resisted drainage efforts. Despite the miles of ditches that had turned thousands of acres into farmland, vast areas adjoining the river still were underwater. The culprit was a ledge of limestone, extending a mile upstream from Momence. The ledge acted as a natural dam that restricted the river’s flow, keeping water levels from being lowered in the Marsh.

In July 1893, a crew of 50 laborers began cutting a channel three feet deep, 200 feet wide, and more than a mile long through the limestone ledge. Even though the ledge was located in Illinois, the excavation work was paid for by a $65,000 appropriation from the Indiana state government.

The lowering of the ledge had the desired effect, speeding up the flow of the river and allowing drainage of additional areas of the marsh. The “murder of the marsh” had not yet been completed, however: in May 1894, the Chicago Tribune reported from Momence:

“About seventy-five landowners in the Kankakee Valley … met in this city today to talk over plans for straightening the channel of the Kankakee River from near South Bend, Ind., to this city in order to secure better drainage for 600,000 acres of marsh land.”

That straightening effort would begin in 1902 and last for 20 years. By the time it was completed in 1922, the Kankakee River in Indiana had been converted from a meandering, 250-mile-long waterway with 2,000 bends to a series of canal-like, straight-line ditches about 90 miles in length.

Jack Klasey came to Kankakee County as a young Journal reporter in 1963 and quickly became “hooked” on local history. In 1968, he co-authored “Of the People: A Popular History of Kankakee County.” Now retired from a career in the publishing industry, he remains active in the history field as a volunteer and board member at the Kankakee County Museum. He can be contacted at jwklasey@comcast.net.

The conversion of the Kankakee River in Indiana into a series of straight-line ditches has had a serious ecological effect upon the river in Illinois. What is that effect?

Answer: Huge amounts of sand eroded from the Indiana farmlands continue to be deposited in the Illinois portion of the Kankakee. (A 1998 federal report estimated that 130,000 cubic yards of sand had been conveyed across the state line in a 15-year period.) The sand settles out in the riverbed, affecting the navigability of the river and impacting the fish population.