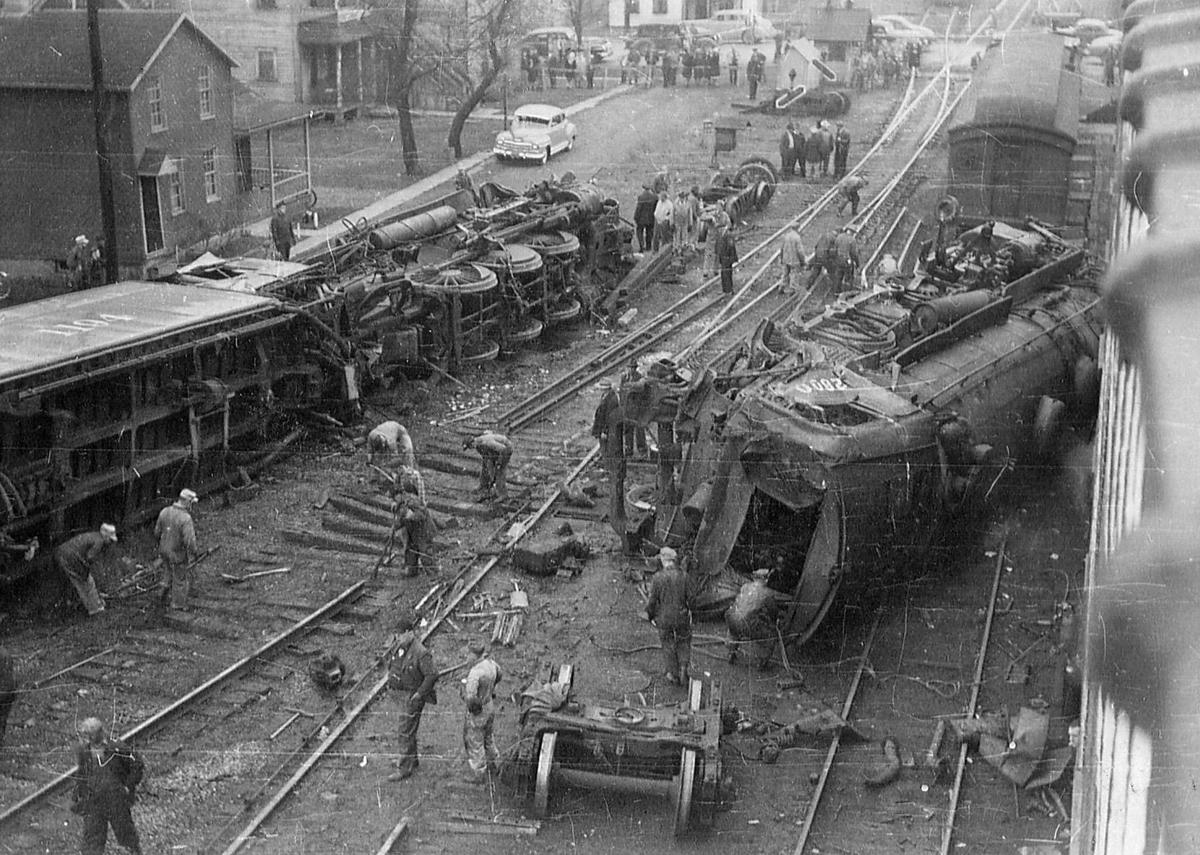 On the morning after the wreck, the two derailed locomotives are surrounded by workers repairing the torn-up rails. The view is to the east, with the Dearborn Avenue crossing visible in the background. At left is the passenger train locomotive, which was headed east on the main line. At right is the freight locomotive, which had been moving westward in reverse when the collision occurred. 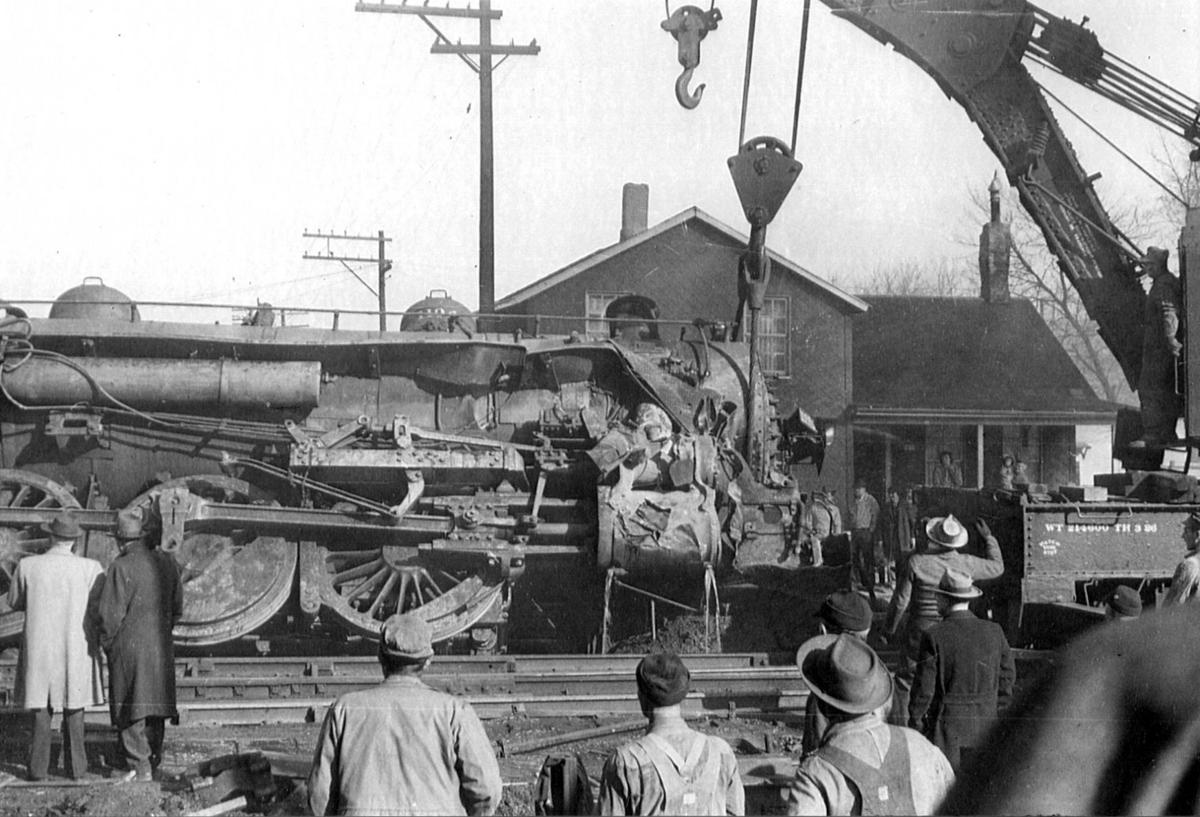 A powerful crane hoists the derailed Big Four passenger locomotive back onto the tracks. The front-end damage shows where the locomotive struck the freight engine, throwing both off the rails.

On the morning after the wreck, the two derailed locomotives are surrounded by workers repairing the torn-up rails. The view is to the east, with the Dearborn Avenue crossing visible in the background. At left is the passenger train locomotive, which was headed east on the main line. At right is the freight locomotive, which had been moving westward in reverse when the collision occurred.

A powerful crane hoists the derailed Big Four passenger locomotive back onto the tracks. The front-end damage shows where the locomotive struck the freight engine, throwing both off the rails.

On the morning of Nov. 9, 1948, a highly unusual scene was visible only a few blocks north of downtown Kankakee: two large railroad locomotives lay sprawled on their sides alongside the Big Four Railroad tracks between the Schuyler Avenue and Dearborn Avenue crossings.

The engines had been derailed at about 10:30 p.m. the previous evening, when Big Four passenger train 438, bound for Cincinnati from Chicago, collided with a freight engine.

The wreck occurred about four blocks west of the Big Four depot, where the passenger train had been scheduled to stop.

Although none of the passenger cars derailed, 20 passengers and crew members were injured; five seriously enough to be hospitalized.

Railroad officials told the Kankakee Daily Journal that the freight engine, operated by engineer Tom Riordan, of Kankakee, had been dispatched to the line’s west yards to pick up a string of freight cars. Riordan’s engine was operating in reverse, backing off a side track onto the Big Four main line, heading for another side track that would take it to the freight yards.

At the same time, the passenger train, operated by engineer Edwin Fortier, of Chicago, came around a curve in the main line a short distance west of the Schuyler Avenue crossing.

The Daily Journal reported that “Mr. Riordan … said that he was backing the locomotive when his fireman, Eugene West, shouted that a passenger train was coming. ‘Gene jumped right away and was able to roll clear of the tracks,’ Mr. Riordan stated. ‘I thought I had a chance to back the locomotive out of the way, so I stuck a little longer. When I realized that I wasn’t going to make it, I jumped out of the right side of the cab.’”

At that point, the passenger train locomotive hit the side of the freight engine, tipping it off the tracks and onto its side.

“As I hit the ground on my hands and knees and looked back at the locomotive,” continued Riordan, “I saw it starting to fall. I scrambled out of the way just as it hit the ground.”

Engineer Fortier and the passenger train’s fireman, Louis Hitt, were unable to jump from their locomotive before it derailed and came to rest on its side north of the tracks.

Although the train’s passenger coaches and Pullman (sleeping) cars remained upright on the rails, most of the 20 injuries took place within them.

“Residents near the grade crossing,” noted the newspaper, “said that when they reached the coach and Pullman cars most of the passengers were picking themselves up from the floor where they had been tossed by the impact. Many of them were dazed by the sudden jolting and those that appeared to be injured were immediately dispatched to St. Mary’s hospital via ambulance, police car, or any other cars available at the scene. Persons with minor cuts were treated at the scene by firemen and police officers.”

Three of the injured held overnight at the hospital were children: Larry Wayne Solomon, 19 months of age, from China Grange, N.C.; Edwin Rand, age 3½ and his sister, 6-week-old Ethel.

The Rand children were both from San Francisco, Calif. Parents of the injured children were treated for bruises and shock at the scene of the derailment.

Also being treated at St. Mary’s were Mrs. Julia Gower of Kankakee, and F.E. Russell of Omaha, Nebraska.

Frank E. Russell (most seriously injured of the passengers, with a fractured shoulder) was enroute to Kankakee to visit his brother, Bert Russell, who lived at 215 S. Fraser Ave.

Also planning to attend “the first complete reunion of the family since a few years before the war” were six other out-of-town members of the Russell family —Bert’s two sons and their wives, and a grandson and his wife.

Noting that Frank Russell would be confined to the hospital for several days, the newspaper concluded that “Any reunion of the Russell family during the next few days will have to be at St. Mary’s Hospital.”

Cleanup and repair work at the wreck site began during the night.

By 10 a.m. the next day, less than 12 hours after the derailment, torn-up rails had been replaced and trains were moving again.

Hoisting the two locomotives back onto the tracks took a bit longer, but by late afternoon they had been sent to the Big Four roundhouse for repairs.

The Big Four depot was located on the north side of the tracks, between Harrison and Chicago avenues. Paralleling the tracks on the south side in 1948 (and today) was Cypress Street. In earlier times, that street had another name. What was that name?

Answer: Cincinnati Place, named for one of the towns in the formal name of the "Big Four:" The Cleveland, Cincinnati, Chicago and St. Louis Railway. The Big Four began operating in 1889, and became part of the New York Central system in 1930.