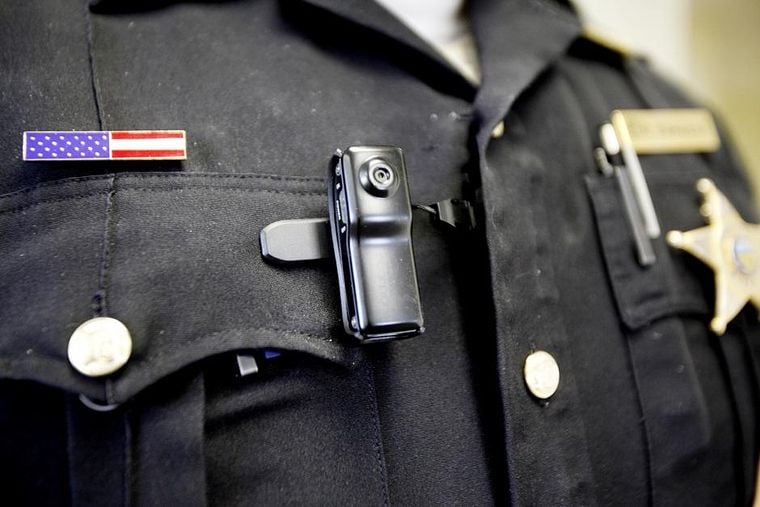 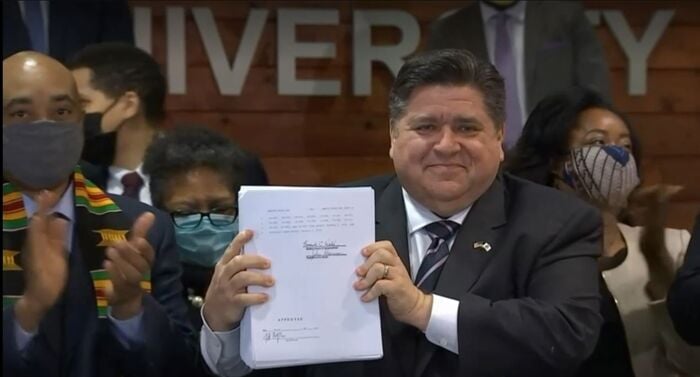 It requires police officers statewide to wear body cameras by 2025. There will be a statewide system for tracking police misconduct and decertifying officers who commit wrongdoing.

“This legislation marks a substantial step toward dismantling the systemic racism that plagues our communities, our state and our nation and brings us closer to true safety, true fairness and true justice,” Pritzker said in prepared remarks before signing the bill at Chicago State University.

“In this terrible year, in the middle of a brutal viral pandemic that hurt Black people and brown people disproportionately, lawmakers fought to address the pandemic of systemic racism in the wake of national protests,” he said. “This bill was also infused with solutions from individuals most directly impacted: survivors of domestic violence, survivors of crime, and those who have been detained pretrial only because they are poor. Today we advance our values in the law — progress secured despite the pandemic, because of the passion and push of the Legislative Black Caucus, activists, advocates, and residents intent on leaving a better Illinois for all our children.”

“It gives me a very good feeling,” Kankakee defense attorney Kenneth Wright said. “We as a state are moving forward.”

He said the bill holds everyone accountable.

“All aspects of the legal system were addressed,” Wright said.

Kankakee County State’s Attorney Jim Rowe said there are some noteworthy reforms, such as mandating body cameras, which he fully supports.

“However, on the whole, the Legislature lumped a bunch of bad unrelated ingredients into a 600-plus page bill at 3 a.m. when everyone was asleep, and delivered a [expletive] sandwich, making it exponentially more difficult to provide for public safety,” he said.

“For instance, the new reforms to the felony murder statute would have allowed the murderers of local hero barber Joe Buck to walk free — nobody wants that, but it’s exactly what Springfield just passed. Hopefully they can make some amendments over the coming months in a more transparent fashion.”

Bart Beals is a Chicago defense attorney who represents clients in Kankakee County.

He said there are really good provisions such as requiring body cameras.

“I also agree with the provisions aimed at ending cash bail for some defendants, especially for cases that involve accusations of nonviolent crimes,” he said.

“Criminal justice reform is a necessary step toward a fairer system of justice and it will have the added benefit of making communities safer through better relations between the community and police due to police accountability. The more we put forth policies that promote police accountability the more we are able to free good, professional, and honest cops from the shackles of the thin blue line.”

Kankakee County Sheriff Mike Downey has concerns but when parts of the bill go into effect on July 1, law enforcement will be ready.

“The important thing is as of July 1, when we wake up, we will do what police officers need to do,” Downey said.

“As far as the legislation goes, there are parts of the bill I don’t agree with but I agree with other points. In regards to police reform, that needs to be an ongoing process. I’m in favor of training for officers. What police officer would not want more training? Body cameras, I’m 100 percent behind. But not allowing an officer to review the footage when writing a report is not good. You make one mistake in the report and you can now be charged with a felony.”

While his department has until 2023 to comply with body cams, Downey said he is for equipping 51 officers now. The law does not include statutory funding for departments to purchase the required equipment. Downey said grant money will help pay for the body cameras for his department.

Downey took exception to remarks Pritzker made about some police organizations being liars and fear mongers.

“I found that insulting,” Downey said.

In regards to the nine hearings being held with 30 hours of testimony, Downey said they were subject-matter hearings.

“There were no nuts and bolts about the bill. It had not been written. The dialogue was not there,” he said.

State Sen. Elgie Sims — whose 17th District includes Manteno, Beecher and Grant Park — was among the main legislators shaping and crafting the bill.

“This historic moment is the result of a monumental effort on the part of countless people, from those who testified during the 30 hours of public hearings on these issues, to those who have pushed for some of these reforms for years, and especially to the Illinoisans who signaled their support. I thank them for lifting up their voices and never giving up, and I thank Gov. Pritzker for making these measures the law of the land. The journey continues.”

What the law does

According to the state's website, House Bill 3653 expands safety, fairness, and justice by transforming the state's criminal justice system and enacting statewide police reforms through the following:

• Diverts low-level drug crimes into substance use programs and treatments.

• Expands training opportunities for officers, requires health and wellness services for officers, and protects officers from unjust lawsuits based on their reasonable actions.

• Requires the use of body-worn cameras by police departments statewide.

• Professionalizes policing through the creation of a more robust certification system and lays out clear standards and processes for decertification.

• Eliminates license suspensions for unpaid fines and fees due to red light camera and traffic offenses.