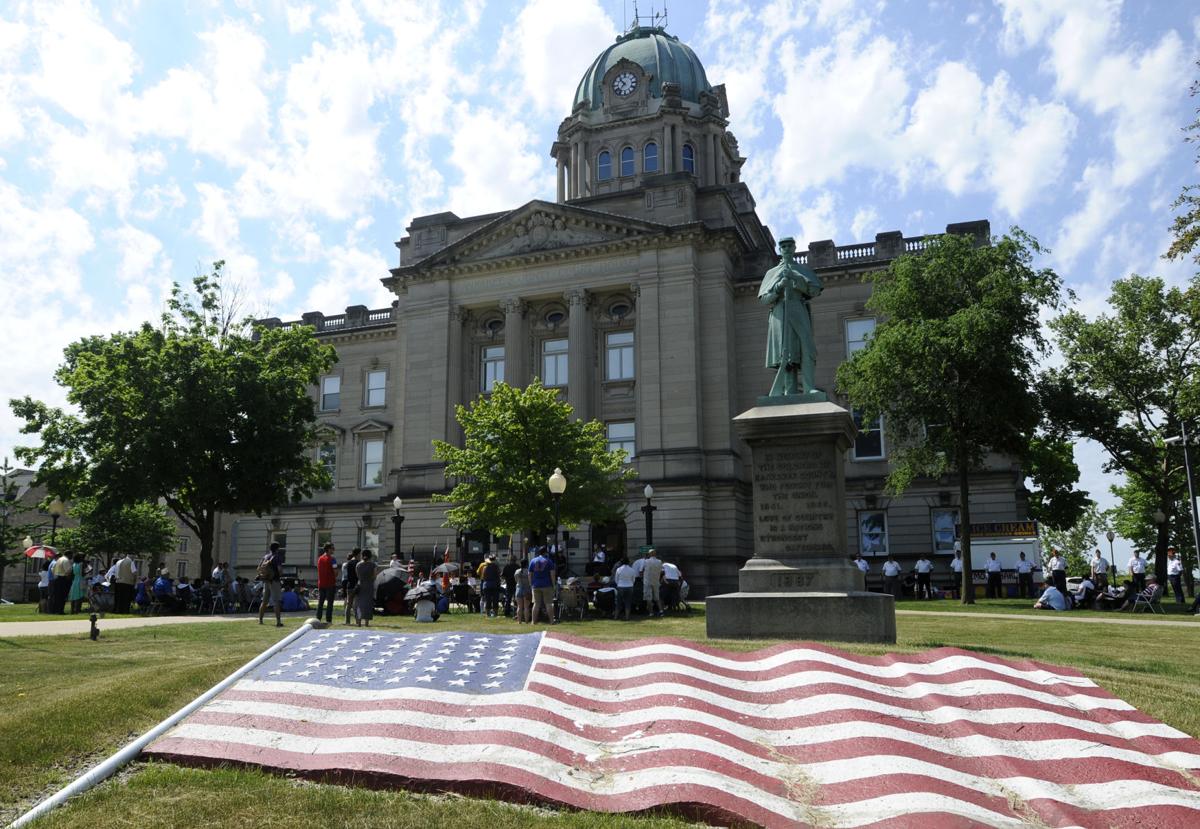 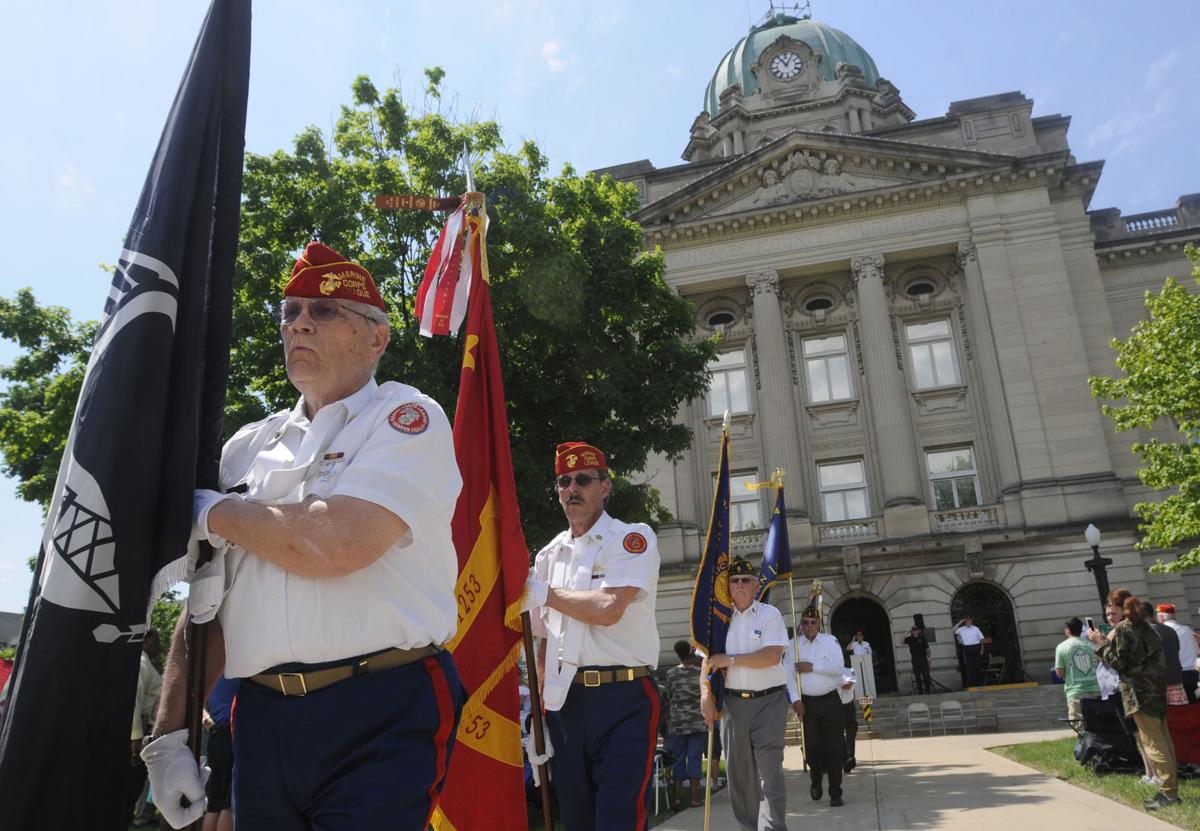 Kankakee Veterans Council members retired the colors in 2018 during a Memorial Day ceremony at the Kankakee County Courthouse.

Kankakee Veterans Council members retired the colors in 2018 during a Memorial Day ceremony at the Kankakee County Courthouse.

Memorial Day is Monday, May 31, and a number of community around Kankakee County will be honoring the men and women who died in the fight for our freedom.

Most events will take place the day-of, with a number occurring in the days leading up to the holiday.

The Bradley American Legion will host a Memorial Day service at 10:30 a.m. Monday. The event will be held outdoors (weather permitting) at 835 W. Broadway St., Bradley. The Legion’s post is right next to the war memorial.

“We’ll put crosses out into the lawn area and we have the [Boy and Cub] Scouts involved,” Monacelli said. “When the mayor reads a name, a Scout will place a wreath on the cross.”

There also will be a rifle salute from the Bradley Rifle Team, as well as a taps performance by Rod Williams. The entire ceremony typically lasts around 30 minutes.

“Memorial Day is significant to the word ‘freedom,’” said Olenjack. “I know many of the sons and daughters of Kankakee have left off to war and never returned home. They gave up everything for freedom and this is what the holiday is all about.”

The first service will be 9 a.m. at the Memorial Gardens Cemetery, 15 Lowe Road, Kankakee. Military rites will be performed by the Council’s Military Service Organizations, and the keynote speaker will be David R. Allen Jr. of Bourbonnais.

He also will be the keynote speaker at the second Memorial Day service set for 10:30 a.m. Monday on the north lawn of the Kankakee County Courthouse. The Veterans’ Council will be posting the colors, commanded by Stan Bobka of the Kankakee Marine Corps League. Kankakee Mayor Chris Curtis will be presenting an opening Memorial Day message.

Opening ceremonies will include the Pledge of Allegiance and national anthem, being performed by local vocal artist and musician Tim Rehmer, who will also be performing other vocals throughout the program.

Chaplain Peg Myers will be giving the invocation and a roll call of the veterans who have passed away over the last year. The laying of the Memorial Day wreaths will be presented by Karen Smietanski, of the Kankakee County VAC office along with various military service organizations, and by participation from the veterans in the audience.

Closing the Memorial Day ceremony will be an honor guard firing a live rifle salute in memory of all our fallen comrades, commanded by Mike Spade, commander of the St. George American Legion, and taps will be played by local BBCHS student and Marine Corps League bugler Emma Caise.

The events are open to the public and attendees are permitted to bring folding chairs. The ceremonies will be performed rain or shine. After the ceremony has ended, there will be a special treat for all in attendance at the courthouse. Face masks are encouraged, as is social distancing.

The Manteno Legion Color Guard invites veterans and the public to celebrate Memorial Day by honoring fallen warriors at five local cemeteries and performing a remembrance for the deceased which includes a rifle salute followed by taps played by Manteno High School students on the trumpet.

The Manteno Legion commander and chaplain will also give short speeches. When they return to the Manteno Legion, the color guard along with veterans and supporters will march to the Legion Park where a final remembrance will be performed.

The public is invited and encouraged to attend any or all of the planned events. A small lunch will be served following the events at the Manteno Legion.

Schedule of events for the Manteno Legion Color Guard’s Memorial Day ceremonies on May 31:

The Momence Honor Guard will be holding a number of Memorial Day services on Monday. The schedule is as follows:

The Kankakee County Veterans Council will begin the Memorial Day flag placement on veterans’ graves 8 a.m. Thursday at Mt. Calvary Cemetery (located next to I-57 on Court Street). When finished with this cemetery, they will move to Mound Grove Cemetery and work for the reminder of the day or until finished.

At 8 a.m. Friday, the group will meet at Memorial Gardens (east on Rt. 17 at Lowe Road) to complete the placement of flags in time for Memorial Day celebrations. For questions and more information, contact Edward Peters at 815-953-4572.

“Memorial Day is significant to the word ‘freedom.' I know many of the sons and daughters of Kankakee have left off to war and never returned home. They gave up everything for freedom and this is what the holiday is all about.”

Ret. Marine Brigadier General Tom Draude, a veteran of Vietnam, Desert Storm and Desert Shield, is being honored as the first Local Hero at the Kankakee County Museum.

The Bourbonnais VFW & Auxiliary Post 9961 will be placing flags on the graves of veterans in honor of Memorial Day.