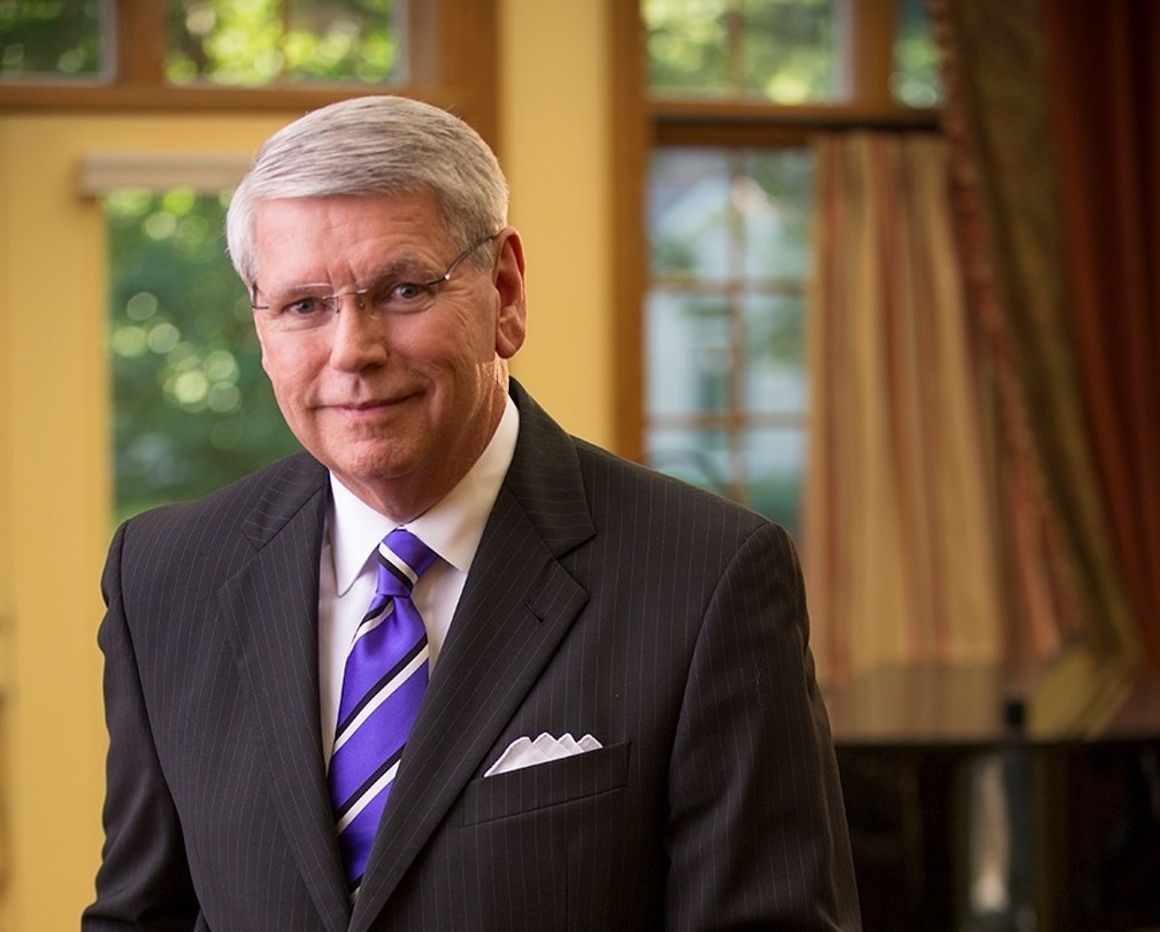 John Bowling is the longest-serving president in Olivet Nazarene University’s history. Poised to start his retirement, he will leave an indelible mark on the campus. 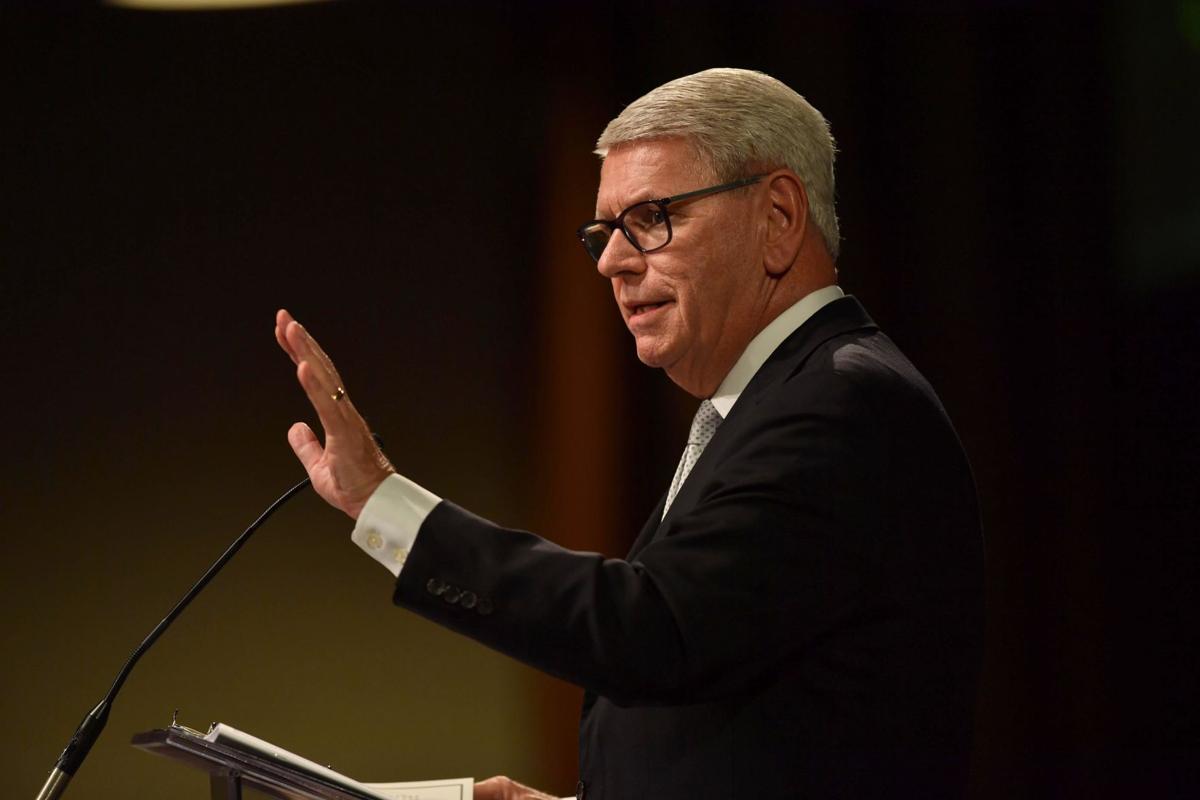 Olivet Nazarene University President John Bowling acknowledges the audience during the President’s Dinner for Faculty and Staff Thursday. Bowling announced his intention to retire after the 2020-2021 school year during the dinner. His departure will end a 30-year tenure as the Olivet president.

When reflecting on being selected for the Daily Journal's Lifetime Achievement Award, Dr. John Bowling shared a quote from philosopher Soren Kierkegaard that sums up his current position in life: “Life has to be lived forwards, but can only be understood backwards.”

Bowling spoke to the decisions and experiences across 30 years as president of Olivet Nazarene University and examined how those decisions shaped his life as a whole.

A change in direction

Growing up in the small, all-American town of Tipp City in western Ohio, Bowling had his sights set on someday taking over his father’s newspaper publishing business. While halfway through his studies of business during his undergrad at Olivet, where he worked at the school’s newspaper, Bowling felt a calling to ministry and thought he would be a pastor.

Bowling recalled a breakfast with his father in which his father suggested he finish his business degree and then, if he still felt the same, he could get his graduate training in ministerial preparation.

“I thought that was a really good idea, but I didn't take it.”

Feeling like he had to make a decision then and there, Bowling opted to change his major during his junior year. After receiving his bachelor’s degree, he stayed at Olivet for another year, married his wife, Jill, and earned his master’s degree in theology.

Once the master’s program was complete, the couple moved to Texas where Bowling attended graduate school, a seminary program, in Fort Worth, where they lived for four years. Then, they moved to Colorado where Bowling began a teaching job at a Nazarene school. A year later, he was invited back to his alma mater to join the faculty.

“That was a providential shift because that then set up the trajectory that landed me in this job years later,” Bowling reflected.

Still in his 20s and just a few years out of school, Bowling was suddenly back in town and was teaching at his alma mater. A few years after teaching at Olivet, Bowling was offered the position of senior pastor at First Church of the Nazarene in Dallas, Texas, which he accepted. He would receive his second doctoral degree during this time.

“I think that if I had just stayed on the faculty at Olivet, I never would’ve been elected president,” expressed Bowling, who attributes the lead-up to his presidential position to teaching and pastoring in different places. "By the time I was elected president, I had the college teaching experience, I had two doctoral degrees and I had 12 years as a senior minister at the church of Nazarene which put me one foot in the church and one foot in higher education. Which for Olivet, was a good combination.”

Bowling followed a 16-year presidency from Dr. Leslie Parrott. Parrott announced his retirement and the university’s search committee quickly went to work to find a successor. Following Parrott’s retirement dinner, the committee sat down to vote on the two names that had been selected for the ballot. However, neither of these names belonged to Bowling.

Bowling, who had attended the dinner with Jill, returned home that night waiting for a call from a friend to let him know who had been selected as president. By bedtime, no one had been chosen and Bowling figured he would simply find out in the morning. While sound asleep at 1:30 a.m., he received a phone call from the chairman of the board of trustees who was calling to tell him that Bowling had just been elected president.

Quickly snapping out of his state of sleep, Bowling came to learn that the committee decided they wanted more of a selection than just two names and eventually Bowling’s was included in the eventual four that they would vote upon. He was declared the 12th president of Olivet just after 1 a.m., and that next night he was down in Springfield representing Olivet at a meeting.

“So I really did two jobs for the next month — I continued to pastor the church,” explained Bowling. “It was the middle of July and we needed to get ready for the beginning of the school year, so I was kind of thrown in the deep end.”

However, Bowling quickly found the footing that would serve him, the university and the community for the next three decades.

“It’s gone so quickly, it’s been a fast 30 years,” stated Bowling, who spoke to part of his job being to facilitate and enable Olivet to adapt and evolve with the changes of the world without changing its mission and values.

During his presidential leadership — which he describes as always needing to be looking out toward the horizon — he worked with the school to start a new division called ONU Global which provides education for non-residential students.

There have also been lots of changes to the campus and the buildings, as well as increased engagement with the community.

“I recognized right away what a wonderful community Kankakee, Bourbonnais, Bradley, Momence, Manteno, the whole county was; it was a very fine cluster of communities on the doorstep of Chicago,” Bowling said. “So I just tried to open up the campus and invite groups in.”

Arguably the most impactful way that Olivet connected with the community during Bowling’s presidency was when the Chicago Bears came to training camp for 18 years, bringing thousands of people to the community.

“When I look back and think about how good the community has been to Olivet, it’s one of the changes I’m most proud of,” said Bowling, who mentioned the growing number of Kankakee County residents who select ONU as their post-high school choice.

The future of Olivet

With his retirement on the horizon, Bowling turns to what he hopes Olivet has in store for the future. His hopes are that the university stays mission-centered, while the niche of ONU’s Christian-based liberal arts college continues to grow as the programs and opportunities expand.

“I hope and fully expect that Olivet will have a very bright future,” stated Bowling “I really, sincerely believe that’s the case.”

While the years have been good to both Bowling and Olivet, he knew that it was the right time to step down and allow the university to have a fresh perspective. Bowling’s successor is ONU graduate Gregg Chenoweth, current president of Bethel University in Indiana. Chenoweth will begin this fall.

“It’s bittersweet for [Jill and I], because it’s been our life,” said Bowling, who will be relocating out of the community upon retirement. “We feel like it’s the right decision at the right time, and I feel that the university has chosen the right successor.”

“It’s a great job, I’ve enjoyed every minute of it.”

"He really turned [ONU] from a college to a true university. He added a lot of leadership to many committees and projects that went on here in the village and throughout the county. He was always one that you could count on and call on when you needed direction on something. He always had good common sense with projects going on. He's going to be missed, for sure."

"As John Bowling’s successor, a tangible and intangible thing is going on right now. An inheritance goes into my hand, like facilities or endowment, but legacy gets into my heart. People might discover I operate in a different style, but there is no gap between John and me on values. In this, his legacy continues."

• Was chosen as a resident fellow for post-doctoral studies at Harvard University.

• Was honored by Olivet in 2007 with the conferral of the Doctor of Divinity degree as part of the University’s centennial celebration.

• Is the longest-serving president in ONU’s history with 30 years.

• Was selected as both the CASE District V Chief Executive Leader in 2020 and the Citizen of the Year by the Chamber of Commerce.

• Received the Community Alliance Beacon Award in recognition of service, vision and leadership in the community.

• Received Samaritan of the Year by Riverside HealthCare Foundation.

• Was elected twice as general superintendent for the Church of the Nazarene, the highest position of leadership within the international denomination. Both times, he turned the position down to continue at ONU. “It was a significant honor, but I just felt like my preparation, my calling, was to work at Olivet,” stated John Bowling, who urges graduating seniors to not only consider the value of looking for a career, but also look for a calling.

During his tenure, Bowling has published over 65 articles and seven books. All of the proceeds from each book have been used to create student scholarships at Olivet.

“I’ve really grown to like it [writing],” said Bowling, who is considering to continue writing during retirement. “It fits with my work in some ways.”

From formerly being on the board at United Way, to being on the Chamber of Commerce boards, as well as two different bank boards, to 15 years on the board at Riverside and was vice-chairman of that board for a long time, there isn’t much of a stone unturned in Bowling’s community outreach.

“I felt like I wanted to take the lead in branching out, volunteering, giving my time and energy and resources to help the community," he said. "Because, as the community gets better, we all get better."

A new program designed to help adult students finish their bachelor's degrees has attracted widespread interest in the two weeks since it launched at Olivet Nazarene University.

Gregg Chenoweth is following a proven path as he prepares to succeed John Bowling as the president of Olivet Nazarene University.

The region’s two higher education institutions announced a partnership by which students with enough credits can claim an associate degree while on their way to a bachelor’s degree.