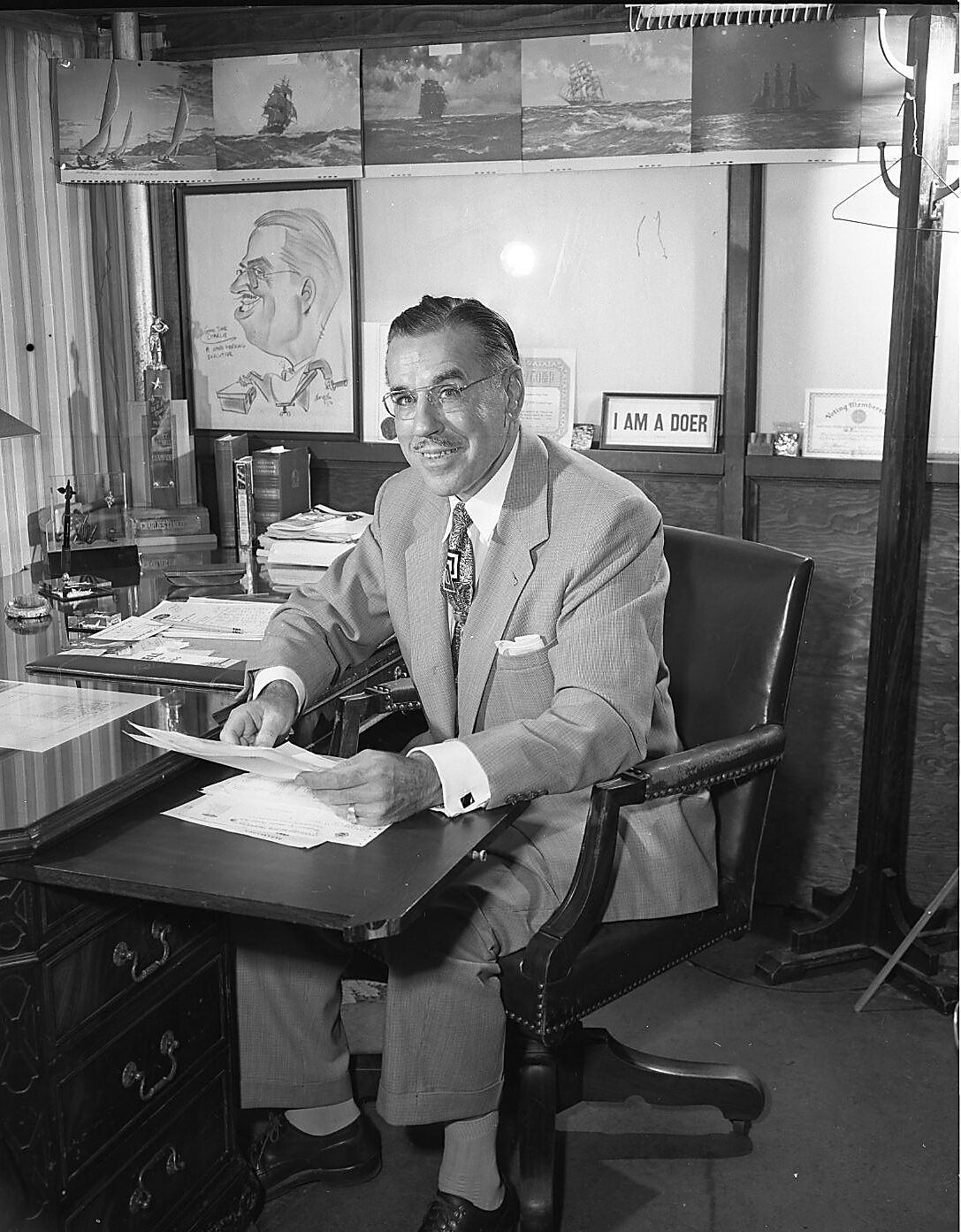 Charles A. “Charlie” Kribs was a well-known businessman who was active in many local organizations (the “I Am A Doer” sign visible over his left shoulder described his philosophy of community involvement). 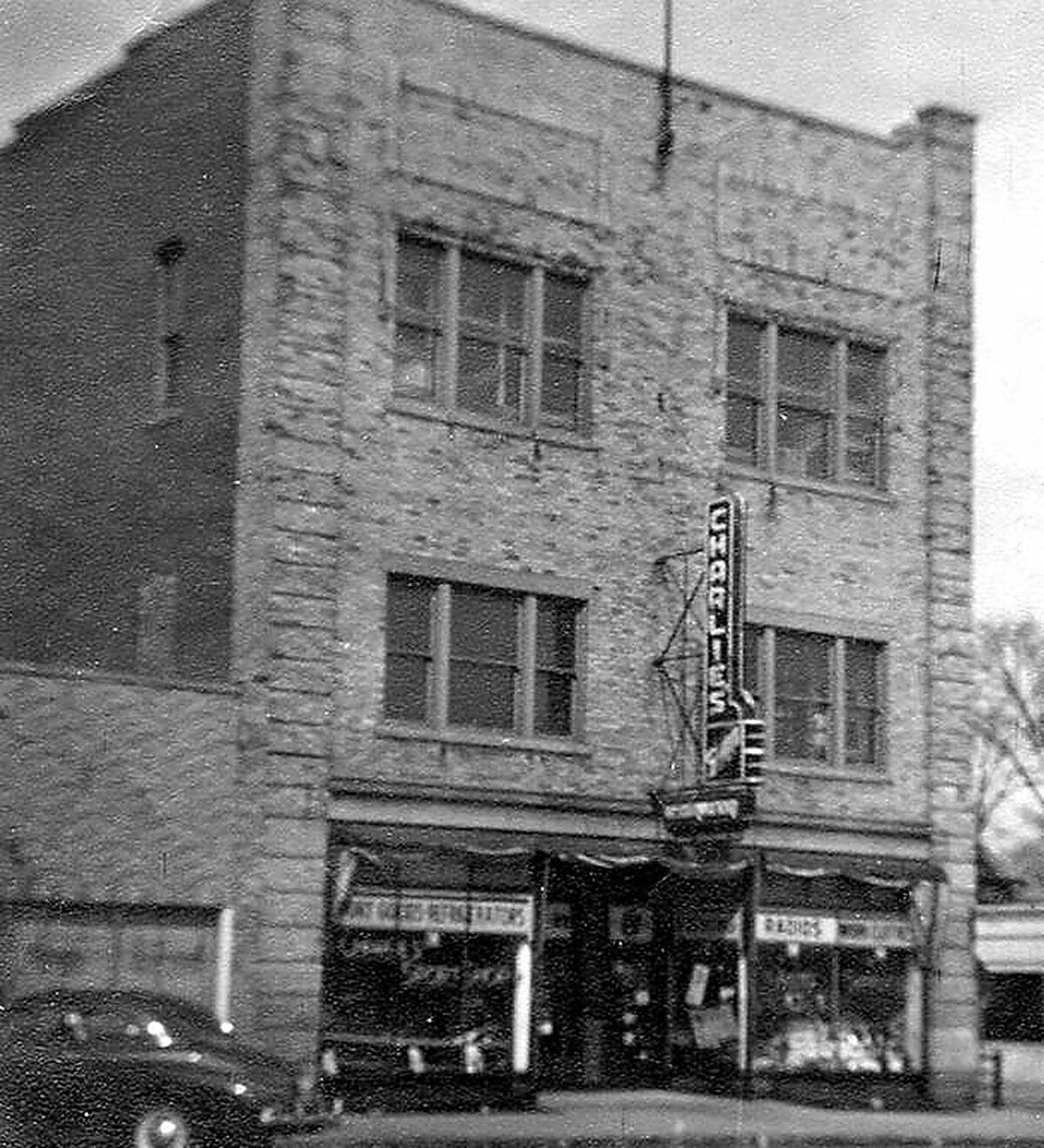 From the late 1930s to the early 1960s, "Charlie's Store" was a Court Street landmark. The ground floor of the three-story building was crammed with a wide variety of merchandise, ranging from automotive accessories to sporting goods to home appliances. 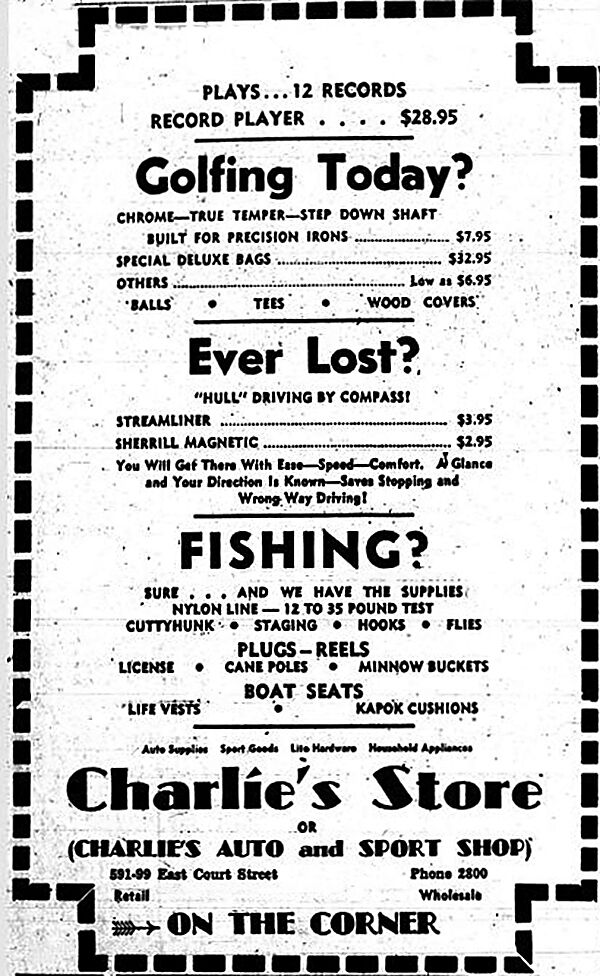 Distinctive advertisements like this one helped keep Charlie Kribs and his store in the public eye. This June, 1946, ad promoted sporting goods, which were a major portion of the store's inventory.

Charles A. “Charlie” Kribs was a well-known businessman who was active in many local organizations (the “I Am A Doer” sign visible over his left shoulder described his philosophy of community involvement).

From the late 1930s to the early 1960s, "Charlie's Store" was a Court Street landmark. The ground floor of the three-story building was crammed with a wide variety of merchandise, ranging from automotive accessories to sporting goods to home appliances.

Distinctive advertisements like this one helped keep Charlie Kribs and his store in the public eye. This June, 1946, ad promoted sporting goods, which were a major portion of the store's inventory.

When it comes to naming a business, some owners choose a grand and impressive title, such as “The Great Atlantic & Pacific Tea Company” (a chain of food stores that most customers referred to as just “The A&P”).

Charles A. Kribs opted for a different approach when he opened his business in Kankakee during the waning years of the Great Depression. He called it simply “Charlie’s Store.”

Located on the ground floor of a three-story, yellow-brick building on the northwest corner of Court Street and Chicago Avenue, the store was a local landmark from the late 1930s until his retirement in 1961.

“Charlie” Kribs was not a native of Kankakee; he was born in 1899 in the Southern Illinois town of Prairie du Rocher. He was working in Hammond, Indiana, in the late 1930s, when he decided it was time to start his own business. How he chose Kankakee to start that business was related in a 1954 profile in the Kankakee Daily Journal.

“Some persons become residents of a community by chance — others by choice,” noted the newspaper in its “Portrait Gallery” column. “Among the latter group is Charles A. Kribs. ... Sixteen years ago the Kankakeean, then a resident of Hammond, Ind., decided he wanted to enter business. He chose the type of business he would like and then started a search for some city in which to locate it.

“He wanted to remain within a radius of 60 miles of Chicago and he wanted a city which appeared to be a thriving community with a bright future. Kribs studied maps, graphs, reports, and what have you and finally decided that among all the cities Kankakee seemed to be the best.”

Kribs settled in Kankakee in 1938, and opened his first business: a unit of the Western Tire and Auto Stores chain. It was located in the building where he would spend the next 23 years serving customers. That building had been erected in 1912 by a fraternal group, the Independent Order of Odd Fellows. The Odd Fellows used the upper floors for meeting rooms and offices, while renting out the ground floor. Before Kribs rented the space for his auto supply store, it had been occupied by a wholesale produce company.

In 1941, the name of the business was changed to “Charlie’s Auto and Sport Shop,” a title that summarized the types of merchandise for sale there. The 1941 City Directory listing for the business carried the description, “Nationally Advertised Sport Goods At Lowest Prices, Complete Auto Accessories.”

By 1946, the name “Charlie’s Store” was prominently displayed on a large lighted sign mounted in the second floor over the building’s Court Street entrance. The sign was visible for several blocks east and west of the building

Kribs was a regular advertiser in the Daily Journal, often using humor to capture the attention of potential customers. A June 1946, ad displayed the word “SUCKERS?” in large type followed by the line, “No, Not You. Just Want You to Read This.” The ad went on to list such items as hip boots, cane poles, nylon line, seines, minnow buckets, and fishing lures such as Hawaiian Wigglers and “jitterbugs.” The same ad included a description of a combination radio/record player “designed for better living.” The store’s line of merchandise had broadened by that time to include “lite hardware” and “household appliances.”

The phrase “Charlie Says:” appeared at the top of many of his ads, followed by a pithy saying (for example, “Imitation is the best of compliments”) or a comment on the advertised merchandise. A December, 1946, ad promoted car battery chargers, “Rocket Pens” that would write for “15 years without filling,” Christmas tree stands, flashlights, auto spotlights, and chrome grille guards. Charlie’s comment: “These Gifts Are Equally As Good for a Lady Santa Claus.”

In the photo accompanying the Portrait Gallery article, a small sign stating “I Am A Doer” is visible behind Kribs’ desk. It sums up the businessman’s energetic approach to life — in addition to running his business, he was deeply involved in the community. His business sponsored a number of baseball, softball and bowling teams, while he was personally active in the Chamber of Commerce, Community Chest campaigns, Boy Scouts, the Catholic Youth Organization, the Kankakee County Democratic Central Committee, and several fraternal organizations. After retiring from business in 1961, he served for a number of years as a Kankakee County juvenile probation officer.

Answer: The Kankakee Knights of Columbus building at Indiana Avenue and Merchant Street was built in 1924 as the War Memorial Building, honoring those who served in World War I. Kribs was a third- and fourth-degree member of the Knights of Columbus, and also was, in 1941, one of the founders of the local Catholic Youth Organization, which was housed in the War Memorial building for many years.