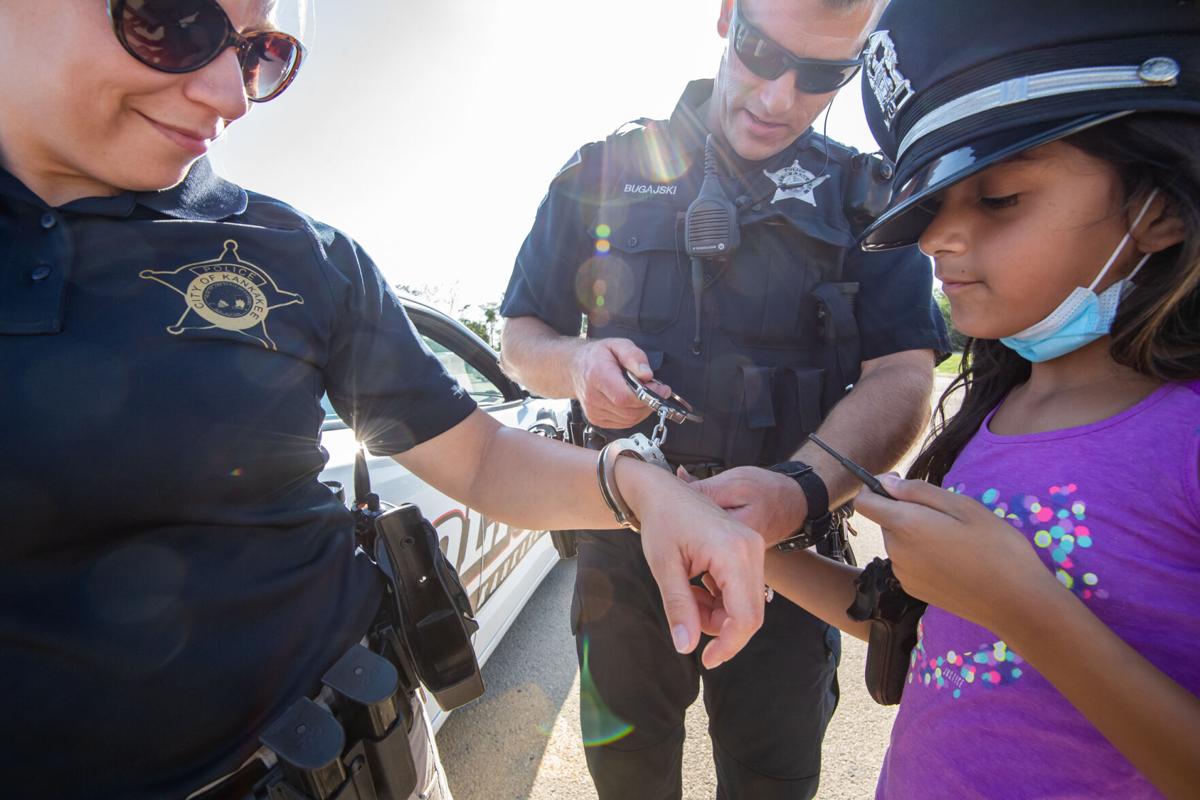 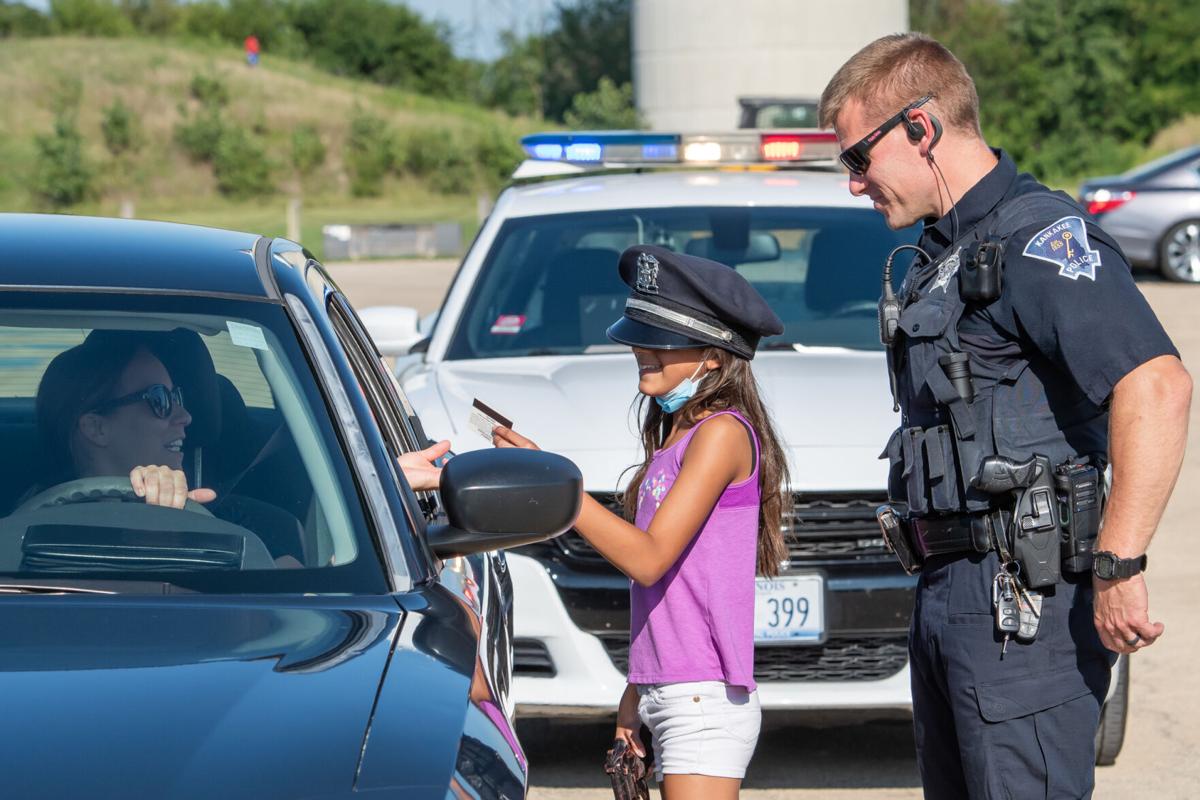 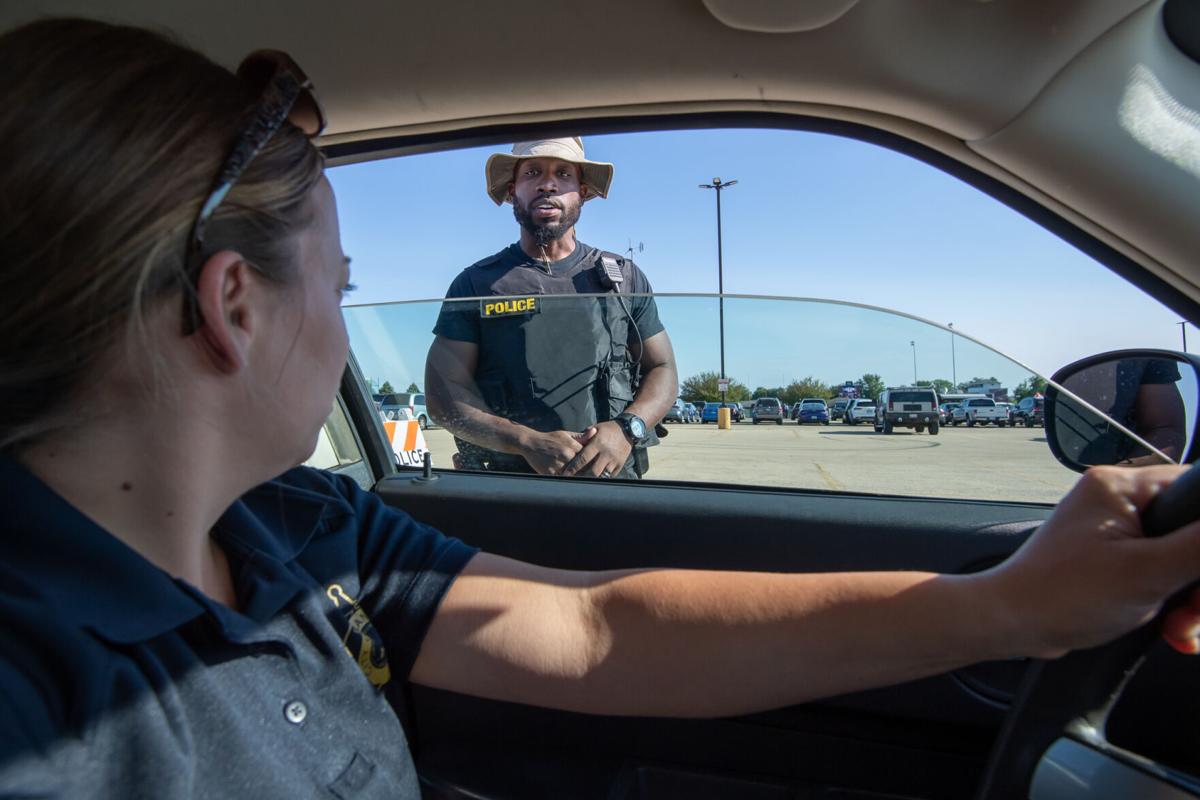 Corran Clark of Kankakee approaches a vehicle during a mock traffic stop Monday in Kankakee. Kankakee Police Sgt. Lacie Harsy plays the role of a driver being stopped by police. READ MORE. 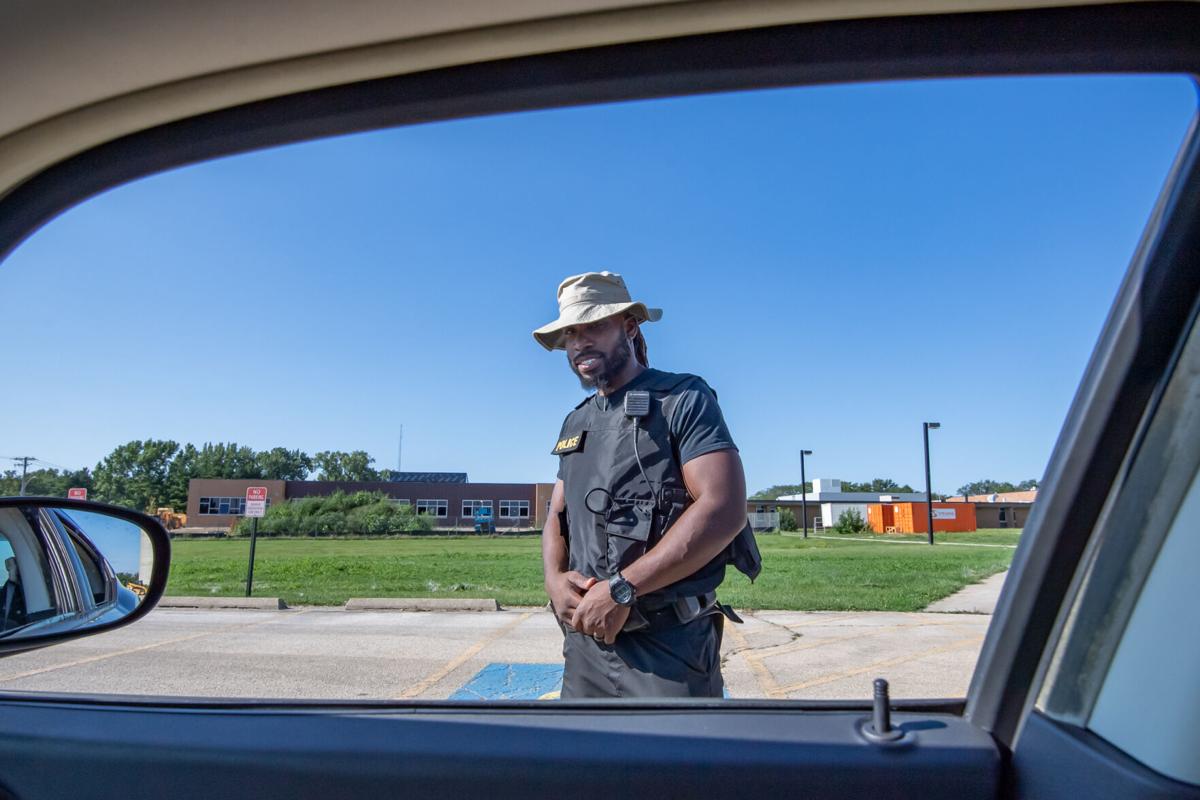 Corran Clark of Kankakee approaches the vehicle during a mock traffic stop Monday in Kankakee. 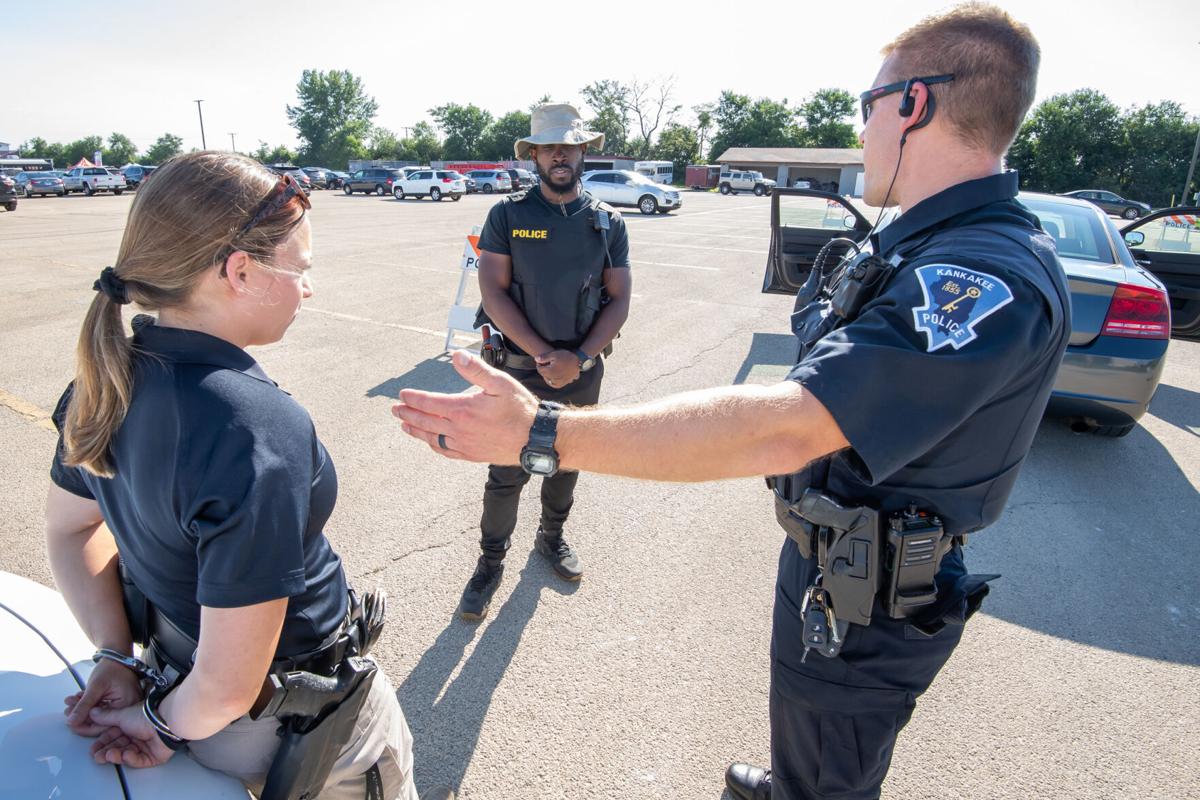 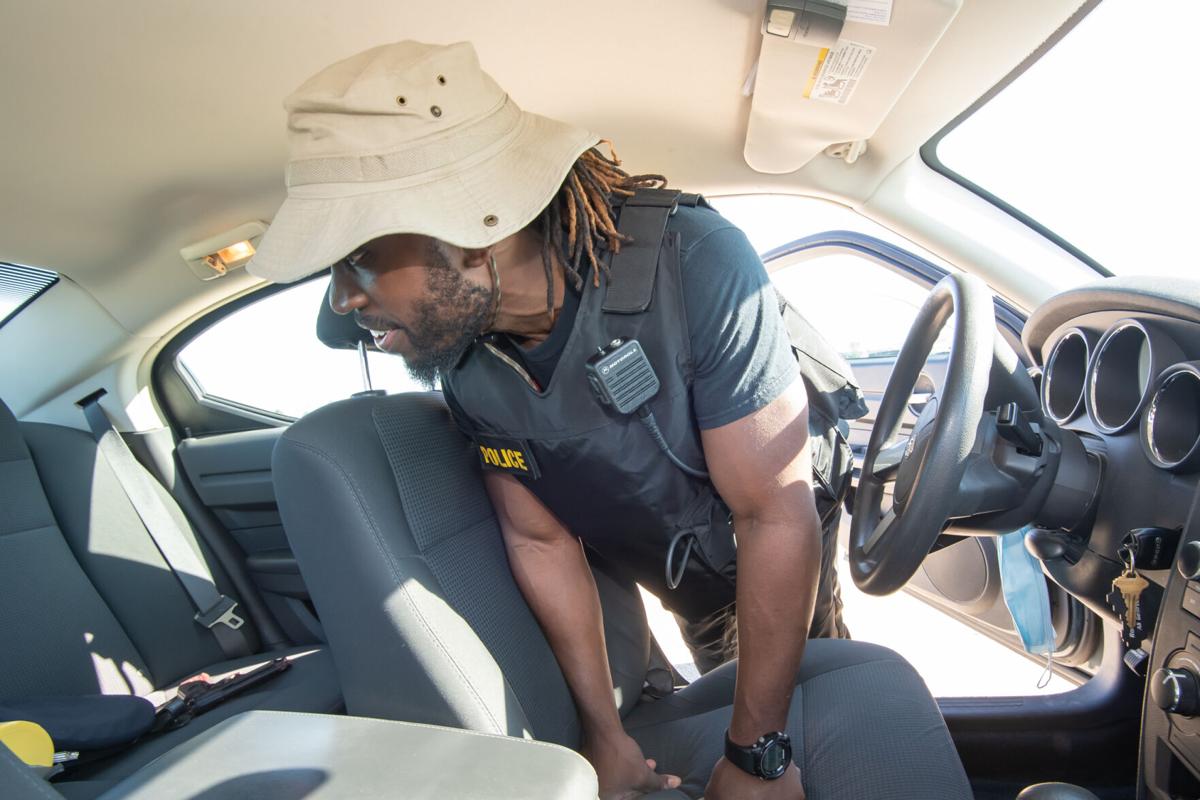 Corran Clark of Kankakee searches the vehicle during a mock traffic stop Monday in Kankakee.

Corran Clark of Kankakee approaches a vehicle during a mock traffic stop Monday in Kankakee. Kankakee Police Sgt. Lacie Harsy plays the role of a driver being stopped by police. READ MORE.

Corran Clark of Kankakee approaches the vehicle during a mock traffic stop Monday in Kankakee.

Corran Clark of Kankakee searches the vehicle during a mock traffic stop Monday in Kankakee.

KANKAKEE — Police lights and sirens filled the parking lot of Kankakee High School Monday evening as the district’s annual back-to-school event was in full swing. However, the hubbub was not a cause for alarm — rather a cause for learning.

Earlier this year, Kankakee United and the Kankakee Police Department — in conjunction with Illinois Coalition for Community Services (ICCS) and Youth For Christ’s City Life Center — started a program that brought attention to the relationship between the community and law enforcement.

The Police Stops program allows local citizens to step into the shoes of a law enforcement officer during a traffic stop. In these mock police stops, citizens go through the process of an officer.

The idea was developed by ICCS field representative Rhonda Currie, City Life Center director Aaron Clark, and Kankakee Police Commander of Investigations Donnell Austin. The latter said that they’ve received “nothing but positive feedback” since starting the program in May.

“With the stops, we kind of allow each person to put themselves in the perspective of a police officer,” said Austin. “Traffic stops are calls we handle on a regular basis that can be dangerous.”

During Monday’s event, the program was geared toward youth as local students were invited to experience the program.

“We want them to get kind of a bird’s-eye view, in 10 to 15 minutes, of what we go through in a day-to-day operation,” said officer Jose Diaz, who was one of the participating law enforcement members.

Each participant wore a police vest and belt to deepen the officer experience. Some youth went through the process of giving their citizen a verbal warning and some got to dig a bit deeper.

When asked what the most important task of a police officer is, Izayah said “to keep everyone safe.” Isauria agreed by saying that officers “protect their town or their city.”

Sofia Alvarado, of Kankakee, had participated in a program earlier this year and brought her children Mariel Camargo, a high school senior, and Humberto Camargo, a college freshman, to experience it for themselves.

“Since [my kids] got their driver’s licenses not too long ago, I wanted them to know what to do if or when the police stops one of them,” said Alvarado.

Humberto said he was looking forward to “learning what to do and what not to do.”

“I also want to stay calm during that situation because, maybe without this, I would be really nervous and kind of scared if I’m ever to be stopped,” he said.

Mariel agreed that learning what to do and how to stay calm was a motivator for participating in the event.

The siblings then got the chance to step into the officers’ shoes and see from their perspective how the experience can go.

“I learned a lot of information,” Mariel said after the fact. “[The officer] told me about what to look for in the person that you’re pulling over and things like that.

“I think it was a very useful experience for in the future if I were to get pulled over,” she concluded.

After hosting a number of events throughout the county — from Kankakee Community College to Olivet Nazarene University to National Night Out — KPD Commander Austin looks forward to watching it continue to grow. At the end of the day, the purpose is to create a bridge between citizens and local law enforcement.

“Sometimes if you just have a conversation with people, it helps bring down the anxiety,” he said.

As you're driving, you glance in your rearview mirror and see the flashing red and blue lights of a police vehicle following you.

Successfully dealing with a stressful situation such as a traffic stop was the focus of mock traffic stops and arrests held Wednesday by the Kankakee Police Department.

There’s just something nerve-racking and unsettling about seeing red and blue lights bouncing off your rearview mirror. For most, it’s a fear of getting a ticket and the hefty fine that comes with it. For some, it’s fear of arrest. For even fewer, it’s fear for their life.