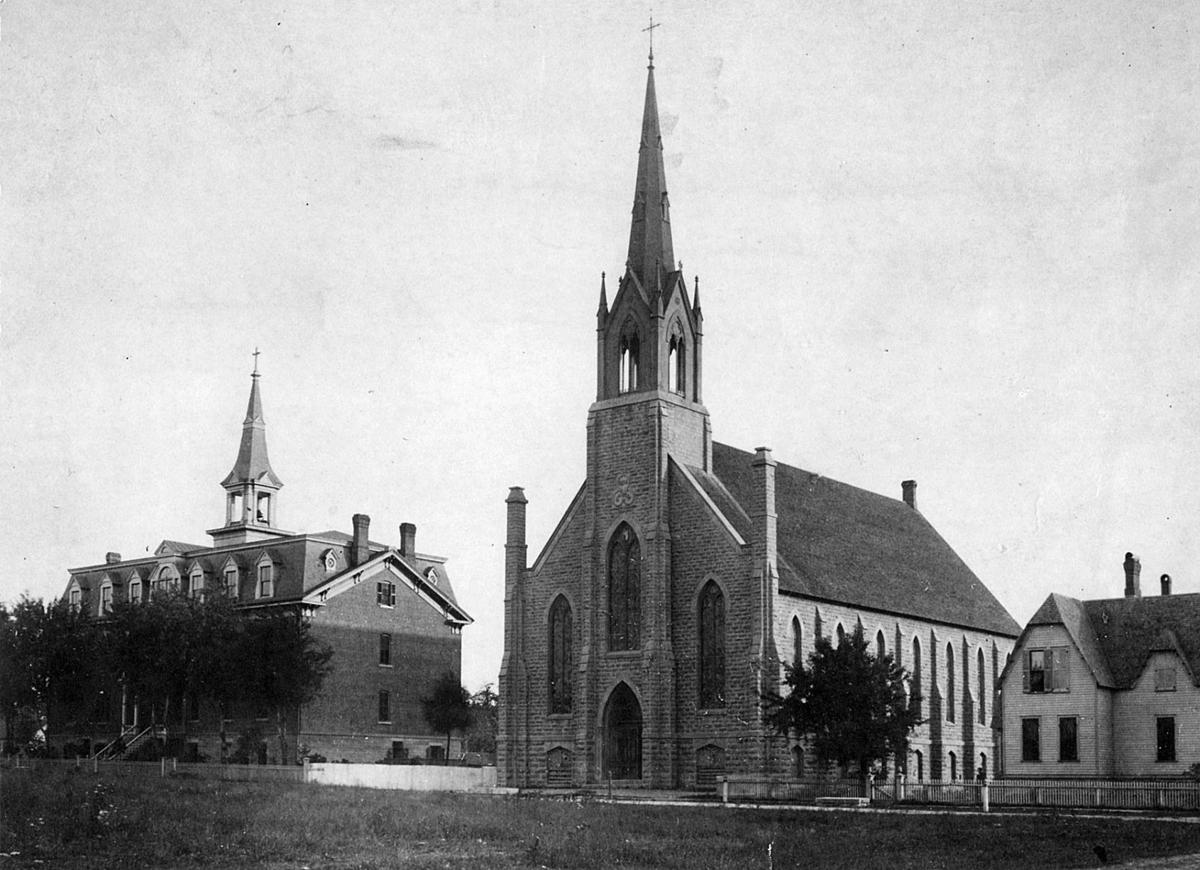 This view, from about 1900, shows St. Rose Church at Fifth Avenue and Merchant Street, where the Canadian delegation was welcomed in French by the Rev. P.B. Dufault. The large building to the left is St. Joseph Seminary, a boarding school for girls that was founded in 1865 and closed in 1965. 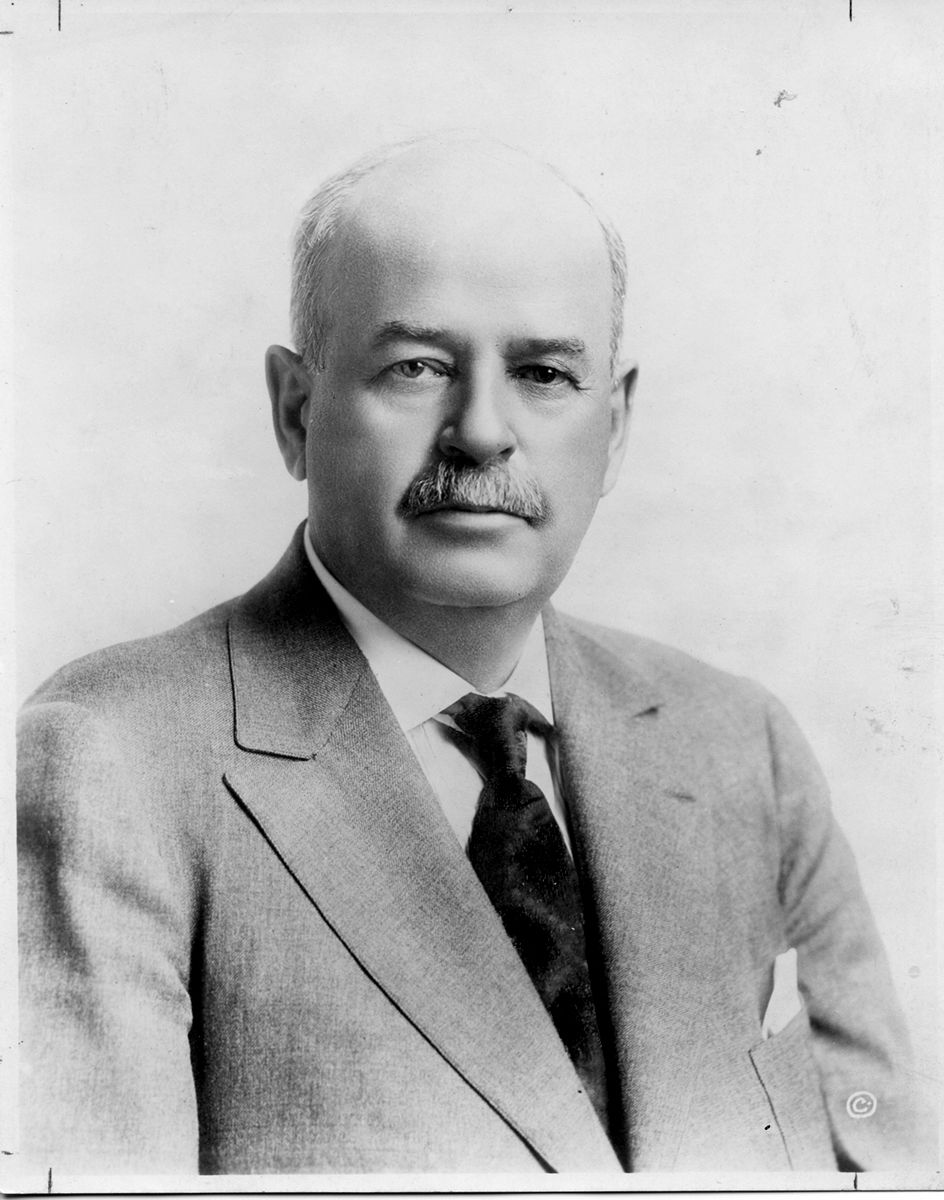 Kankakee native Gov. Len Small of Illinois addressed the Canadian visitors at a civic reception held in the city’s National Guard Armory on Indiana Avenue. He noted that his father, a pioneer physician, was a friend of Noel LeVasseur, whose efforts brought many families from French Canada to Kankakee County. 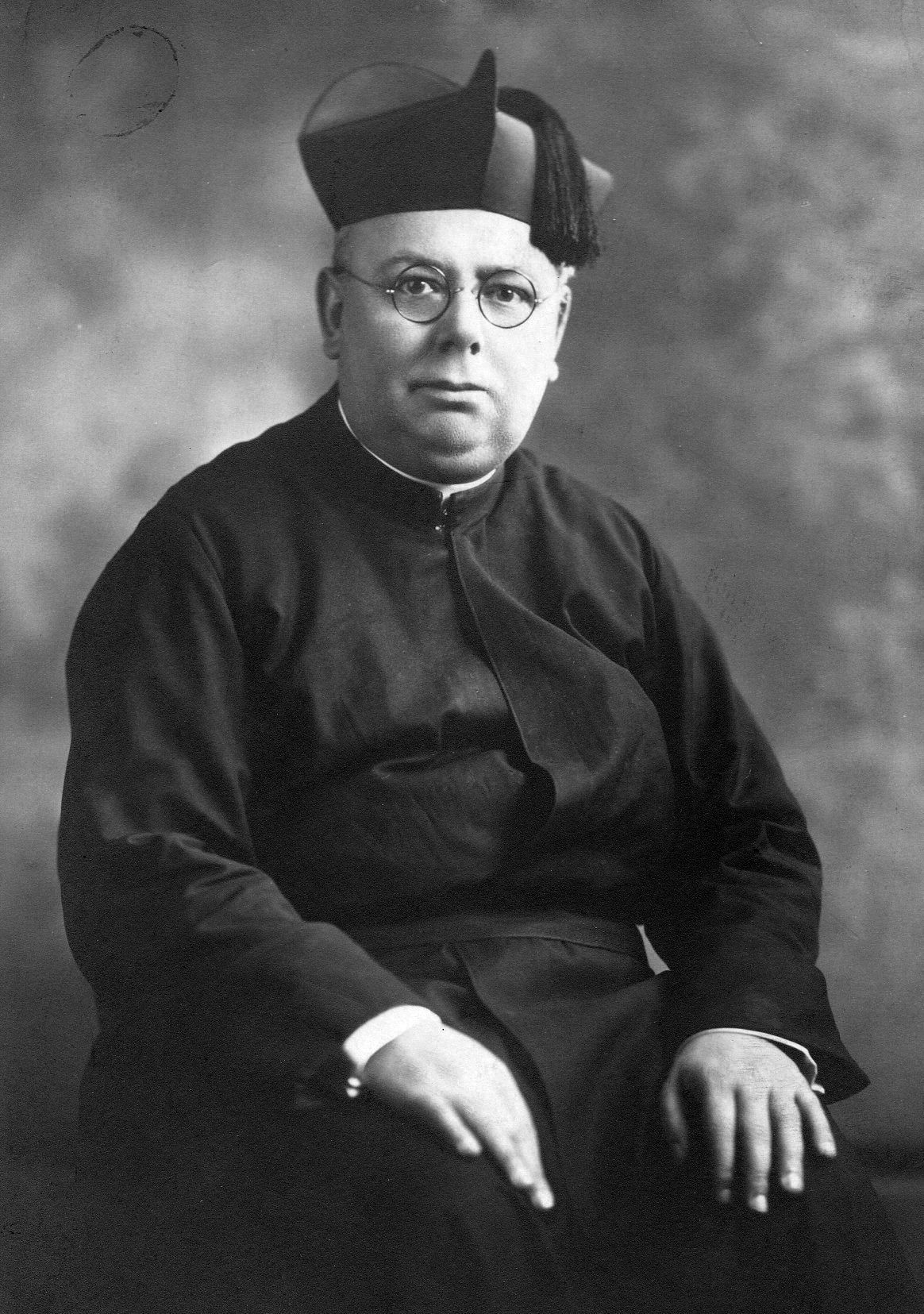 The Rev. P.B. Dufault, pastor of St. Rose Church, welcomed the large delegation from Canada to the church, telling the group that, “In this, our home, we want you to feel at home.”

This view, from about 1900, shows St. Rose Church at Fifth Avenue and Merchant Street, where the Canadian delegation was welcomed in French by the Rev. P.B. Dufault. The large building to the left is St. Joseph Seminary, a boarding school for girls that was founded in 1865 and closed in 1965.

Kankakee native Gov. Len Small of Illinois addressed the Canadian visitors at a civic reception held in the city’s National Guard Armory on Indiana Avenue. He noted that his father, a pioneer physician, was a friend of Noel LeVasseur, whose efforts brought many families from French Canada to Kankakee County.

The Rev. P.B. Dufault, pastor of St. Rose Church, welcomed the large delegation from Canada to the church, telling the group that, “In this, our home, we want you to feel at home.”

In the mid-19th century — from the 1830s through the 1860s — a steady stream of French-speaking emigrants from Canada’s St. Lawrence River Valley and adjoining areas of Quebec Province came to the Kankakee area to farm the rich prairie lands. They settled in and around towns with familiar-sounding names, such as Bourbonnais, St. Anne, St. George, St. Mary’s, L’Erable and Papineau.

Almost a century later, another wave of mostly French-speaking men and women arrived in Kankakee, but remained for only a single day. Some 500-strong, the group alighted from their special train at Kankakee’s Illinois Central Railroad station at 9 a.m. on June 25, 1926. The Kankakee Republican devoted a banner headline to the visit: “Great Welcome Extended Canadians — City Turns Out En Masse to Take Part in Reception in Honor of French Visitors.”

The group, which included seven Catholic bishops and archbishops and 200 priests, had been taking part in a huge religious celebration in Chicago: The 28th International Eucharistic Congress. The five-day event, which was being held in the United States for the first time, drew national delegations from around the world. Two of the largest were the 900-member group from Mexico, and the 500-person Canadian delegation. Some idea of the scale of the Congress can be gained by the fact that an estimated 500,000 people packed into Soldier Field for a Mass on June 21 (music was provided by a choir of 62,000 children from the city’s Catholic schools).

Before returning home, the Canadian delegation had scheduled the Kankakee visit to explore an area where many of their former countrymen had settled in the 1800s. Descendants of those early settlers turned out to welcome the Canadian visitors, as reported by the Republican: “The French people of this community, augmented by public officials and prominent men and women in all walks of life and in all lines of professions turned out enmasse as a great reception committee to extend a welcome to the distinguished group from across the border.”

After being welcomed at the railroad station, “The visitors and several hundred Kankakee people formed in line on Station Street and marched … to St. Rose Church where there was benediction and Rev. P.B. Dufault, pastor of the church, officially welcomed the visitors in the name of the parish.”

Speaking in French, Father Dufault (who noted that St. Rose was “the oldest and most flourishing parish in our city”) told the group, “you are all most welcome to St. Rose of Lima Church. … In this, our home, we want you to feel at home. Because by our faith in Christ our King and by the French blood which runs in our veins you are twice our brothers and for that reason doubly dear to us.”

Following the church visit, the group moved on to Kankakee’s National Guard Armory on Indiana Avenue for a civic reception. The event was chaired by local attorney W.H. Savary, “one of the most prominent of the French citizens of Kankakee,” who introduced another prominent Kankakee citizen, Illinois Gov. Len Small.

The governor described the role played by Noel LeVasseur, “a young fur trader from Canada” in promoting settlement of this area by emigrants from French Canada. “His reports eventually brought many prominent families from Canada and their descendants include many of our most influential and leading citizens,” he told the crowd packing the Armory.

“My friends,” he continued, “it is not really necessary that I welcome you here today. It seems to me that you should feel entirely at home among the descendants, perhaps, [of] some of your kinfolks and neighbors. An examination of the Kankakee directory should make you feel quite at ease for there you will find many familiar names which belong to our leading businessmen and citizens.”

The city of Kankakee’s welcome to the visitors was a double one: Delivered in English by Mayor Louis Beckman, and in French by Dr. T.E. Caron. Representatives of the Canadian delegation responded to the various speeches. One of them, whom the Republican identified as “one of the most eloquent orators of the day,” was T.B. Bernier of Montreal. He referred to the U.S./Canada border as being “only an imaginary one — we are in reality cousins — and the bonds of friendship have been cemented more closely than ever.”

Following the reception, the group made its shortest walk of the day, just a bit over a city block, to the Knights of Columbus building at Indiana Avenue and Merchant Street, where a luncheon was served by the Catholic Daughters of America. They then climbed into a fleet of borrowed cars to undertake a tour of Kankakee, Bourbonnais and other local points of interest.

At 3 p.m., six hours after they began their whirlwind Kankakee visit, the Canadians climbed back aboard their special train for their long northward journey. The Kankakee Republican summed up the day’s events: “It was undoubtedly one of the most auspicious moments in the annals of this county.”

Jack Klasey came to Kankakee County as a young Journal reporter in 1963, and quickly became “hooked” on local history. In 1968, he co-authored “Of the People: A Popular History of Kankakee County.” Now retired from a career in the publishing industry, he remains active in the history field as a volunteer and board member at the Kankakee County Museum. He can be contacted at jwklasey@comcast.net.

St. Rose Church, which served a primarily French-speaking population for many years, was the original Catholic parish in the city. When was that parish founded, and when was the current building constructed?

Answer: In 1855, only two years after the City of Kankakee was established, the Rev. Louis Cartuyvels founded St. Rose Parish, celebrating Mass in a private home on Court Street at Washington Avenue. The large stone church that exists today was opened in 1877, and expanded in 1907. Today, St. Rose is no longer an active parish, but continues to function as a chapel offering periodic religious services. The Association for the Preservation of St. Rose of Lima Chapel, the non-profit organization that operates and maintains the building maintains an informational website at strosechapel.com