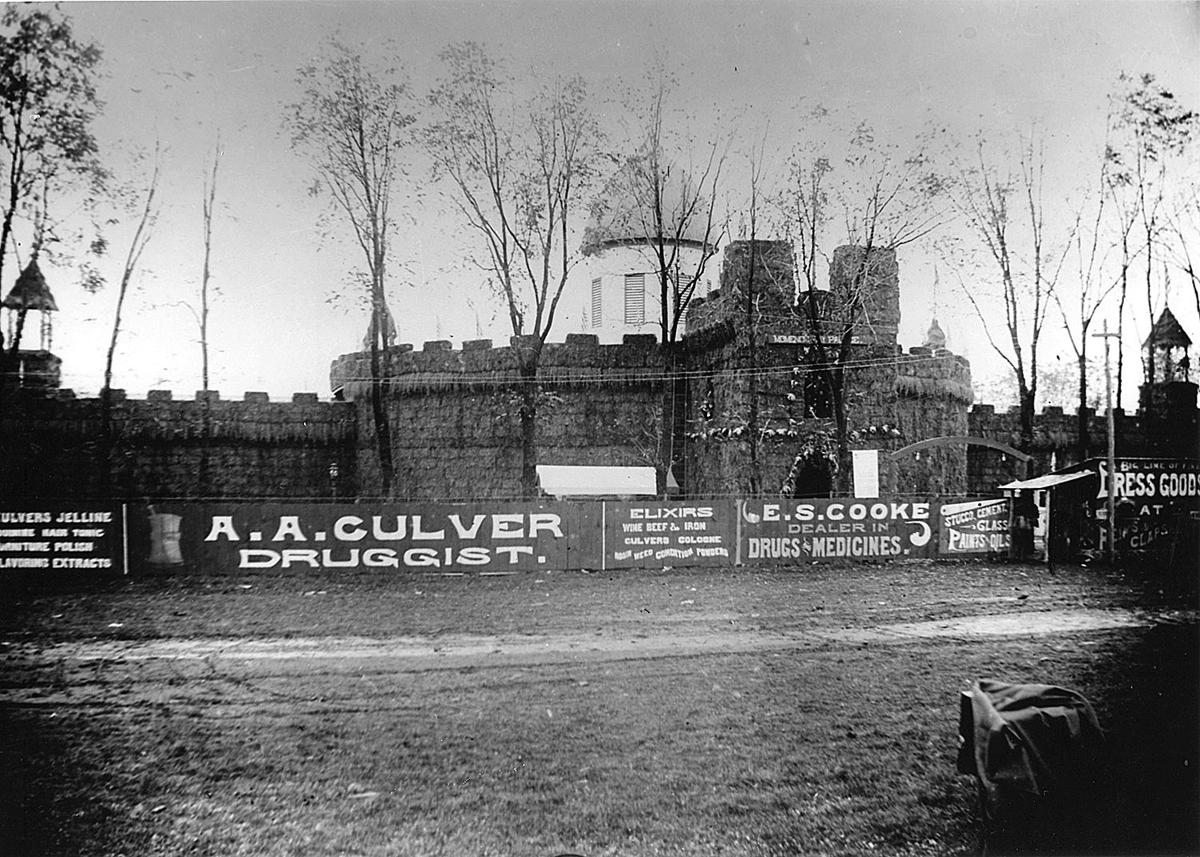 Hundreds of hay bales were used to build the 1890 Inter-State Hay Palace at Momence. It attracted thousands of visitors to the town from Oct. 1-9. 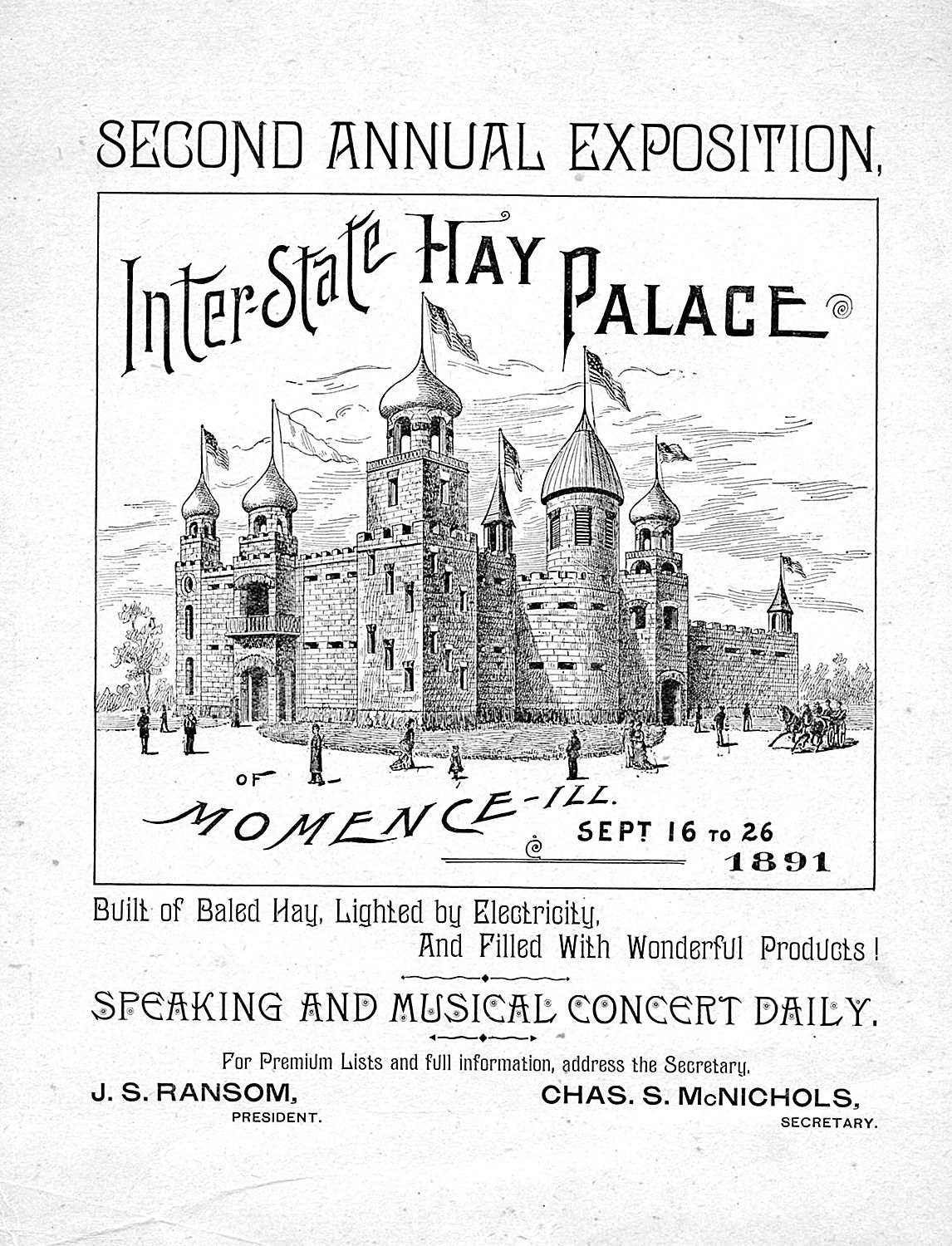 For 1891, the Hay Palace was enlarged considerably, allowing an increased number of exhibits and activities. This poster was widely distributed to advertise the Sept. 16-26 Exposition. 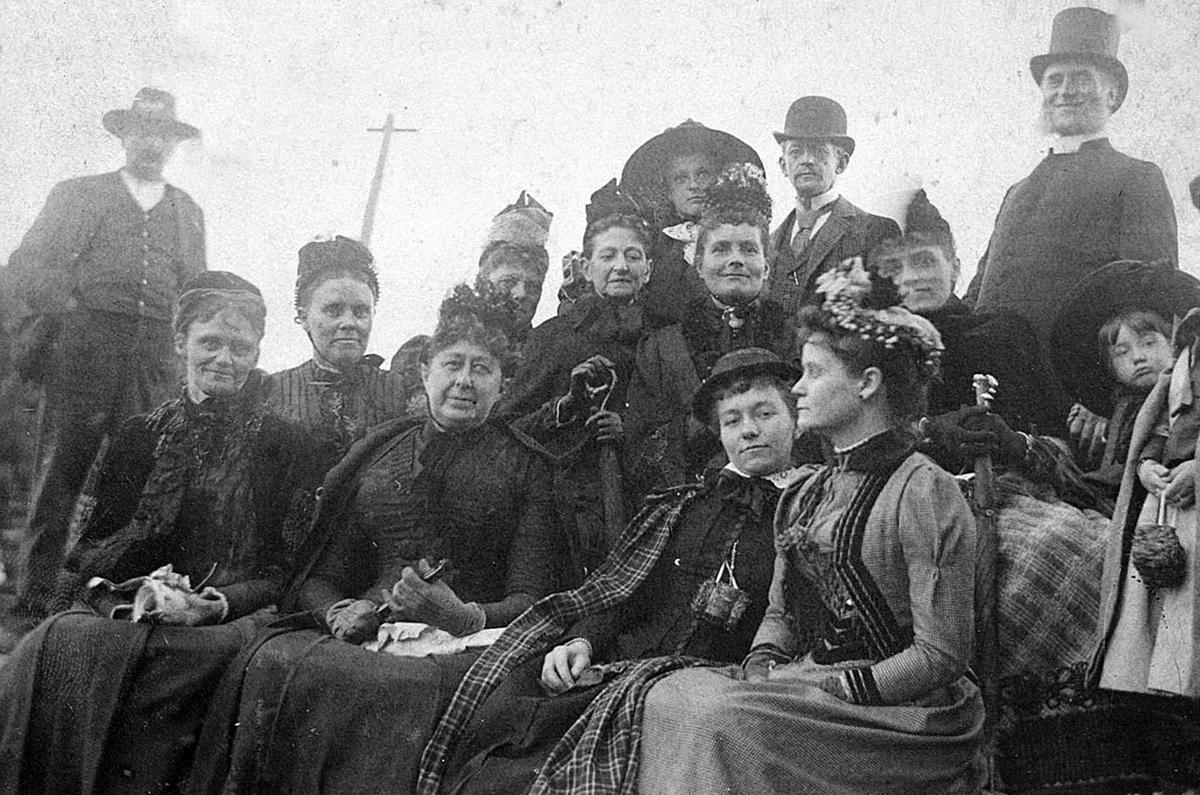 This group of visitors from Kankakee was photographed while touring the Hay Palace on Oct. 2, 1890. Among those in the group were Arthur Holt (in the derby hat), whose family published the Kankakee Gazette newspaper; the Rev. D.S. Phillips (in the top hat), long-time rector of St. Paul’s Episcopal Church; and Mrs. D.S. Phillips, the second woman from the left in the front row.

Hundreds of hay bales were used to build the 1890 Inter-State Hay Palace at Momence. It attracted thousands of visitors to the town from Oct. 1-9.

For 1891, the Hay Palace was enlarged considerably, allowing an increased number of exhibits and activities. This poster was widely distributed to advertise the Sept. 16-26 Exposition.

This group of visitors from Kankakee was photographed while touring the Hay Palace on Oct. 2, 1890. Among those in the group were Arthur Holt (in the derby hat), whose family published the Kankakee Gazette newspaper; the Rev. D.S. Phillips (in the top hat), long-time rector of St. Paul’s Episcopal Church; and Mrs. D.S. Phillips, the second woman from the left in the front row.

Last week, Momence crowned its Glad Festival queen and princess; however, the “royals” did not have a palace.

In 1890 — 128 years ago — that eastern Kankakee County city had no queen or princess, but it did have a huge palace.

Intended to showcase the area’s major agricultural product, the Inter-State Hay Palace was constructed (of course) from hundreds of bales of hay. It was the brainchild of Momence newspaper editor Charles S. McNichols, who had visited a “Blue Grass Palace” in Creston, Iowa, the previous year. Similar agriculture-themed palaces had been built in western towns, but the Momence edifice would be the first east of the Mississippi River.

“The primary object of the exposition,” wrote McNichols, “is to make a display of various products and resources of eastern Illinois and western Indiana, in hopes of attracting investments and immigration from the older eastern states.”

Located on a square block of ground near the present Momence High School, the palace covered an area 206 feet by 166 feet: slightly wider, and two-thirds as long, as a modern football field. It had the appearance of a medieval castle, with a circular central hall 103 feet in diameter and three rectangular wings capped with small square towers. A dome thatched with “bright straw” rose from the circular main hall to a height of 87 feet.

A June 19 Chicago Tribune report, announcing plans for the palace, provided some details of construction: “The Kankakee marshes east of Momence annually produce thousands of tons of a species of wild hay … this hay, pressed into bales 16 by 22 by 36 inches, will furnish the principal visible material used in constructing the walls and towers, but enough baled oat and rye straw, grasses, etc., will be used in trimming to give the exterior a pleasing contrast of color and shading. Corn in various forms, sheaf wheat and oats and other farm products will enter largely in the interior decorations.”

Attractions of the building, beyond its unique construction, were “an immense aquarium containing examples of every species of fish found in the Kankakee and Wabash Rivers”; exhibits of Indian artifacts; displays of the products of the “farms, factories, forests, mines and quarries”; and a Machinery Hall with examples of equipment used in haying, ditching, roadbuilding and the making and laying of drain tile.

One of the three wings off the central hall was a 1,200-seat auditorium used to present lectures “by orators of national reputation” and a number of musical performances. Since both the palace interior and its grounds were lighted by electricity, both daytime and evening programs could be presented.

Scheduled for a nine-day run from Oct. 1-9, the Hay Palace Exposition attracted a good opening-day crowd, despite inclement weather. “The opening exercises of the Inter-State Hay Palace today were a pronounced success,” reported the Chicago Tribune. “Notwithstanding the heavy rainfall, fully 4,000 people saw and admired the beautifully decorated palace and the marvelous exhibit gathered together by the people of eastern Illinois and western Indiana.”

Poor weather apparently was a problem on some other days of the event. The weekly Kankakee Gazette noted on Oct. 9, “a bus-load of school-ma’ms would have visited the hay palace last Saturday had it not rained.”

Surviving members of the 76th Illinois Infantry, a Civil War regiment that had included a large number of Kankakee and Iroquois County men, were not discouraged by poor weather. They held a reunion at the Hay Palace on Oct. 2-3.

The 1890 Hay Palace Exposition was so successful its directors decided to repeat it, on an even larger scale, in 1891. The new version of the Hay Palace covered an area of 224 by 217 feet, including the addition of a new “Art Hall” facing Second Street. Although it is unclear from newspaper accounts, the new Hay Palace might have been based on the still-standing 1890 building. Descriptions of the 1891 building note both the agricultural and machinery halls had been “enlarged,” and “the dome in the center is 90 feet high … having been raised 3 feet along with the roof supporting it.”

Besides an enlarged Hay Palace building, the 1891 event also featured a greatly expanded list of premiums (cash prizes and medals) for exhibitors in vegetables, fruits, flowers, honey and “pantry stores” such as jellies, preserves, pickles, butter and cheese and baked goods. Prizes also were awarded for sewing, knitting, fine arts, architectural drawing, geological specimens and industrial and mechanical arts. A baseball tournament and various track and field events also allowed competition for prizes. Sept. 26, closing day of the 10-day exposition, was designated as Children’s Day, with games, races and other events for youngsters. There also was a baby show, with prizes in various categories, including a silver cup awarded for “the fattest baby under 3 years of age.”

Although the Hay Palace was a successful attraction in both 1890 and 1891, there was not a repeat in 1892 or succeeding years.

Jack Klasey came to Kankakee County as a young Journal reporter in 1963 and became hooked on local history. In 1968, he co-authored “Of the People: A Popular History of Kankakee County.” Now retired, he remains active as a volunteer and board member at the Kankakee County Museum. He can be contacted at jwklasey@comcast.net.

The title “Inter-State,” used for both Hay Palace expositions, was part of another highly successful Kankakee County tourist attraction in later years. What was that attraction?

Answer: The Kankakee Inter-State Fair, which drew huge numbers of visitors to this area from 1912 until 1932. The fair, featuring both agricultural activities and such entertainment events as horse and auto races, musical performances and circus-type acts, was exceeded in size and importance only by the Illinois State Fair.